Ahem (seriously this is the only way I can start this blog post!) I know I mentioned recently on a post how I was on a spending ban, so the fact I’ve spent quite a bit of money on this purchase is extremely naughty of me… BUT I HAVE MY REASONS… Don’t look at me like that, I do!

By the way I just want to get this out there that I KNOW the pictures for this post aren’t the best. It was late when I took the pictures, I was rather stupid due to being sleepy and didn’t use flash. Next time I shall… Or just take the pictures in the day time… Or get some bulbs put into my bedroom lamp as out of three only one works. :S

I’ve wanted a Nintendo 2DS for quite a while now, well since they released it in October 2013, the same date that they released Pokemon X and Y on the Nintendo 3DS and 3DS too, which I’ve wanted ever since it was announced. As well as this I’ve been a huge fan of Nintendo since the age of 5 when one of my brothers gave me his Game Boy after buying a PlayStation and shortly after this my oldest brother gave me his Super Nintendo Entertainment System (SNES) when he bought himself a PlayStation too! As well as that, like most kids from the 90’s, I’ve been hooked on Pokemon ever since it came out!

The reason why I’ve never wanted or bought a 3DS is because the 3D makes me really dizzy and sick, plus I can’t stand the whole con of it that you pay so much money for a handheld console and you don’t even get the charger for it, you have to buy it separately! Piss take, much?! Plus the 2DS is cheaper and I like cheaper… Especially when it gets the charger with it, as well as an SD card! 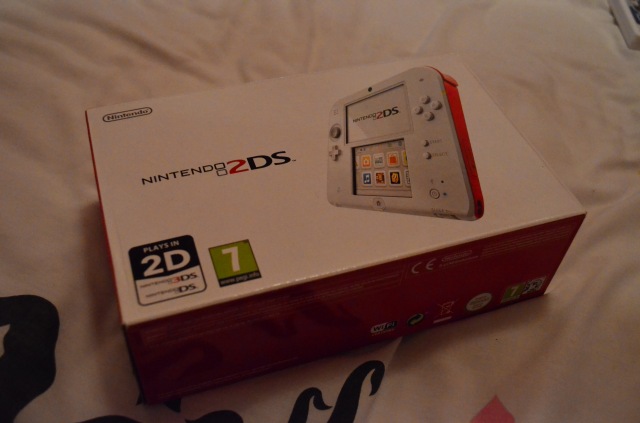 So, what caused me to take the plunge and finally buy myself a Nintendo 2DS? Well I’m going to tell you, of course!

A few weekends back my boyfriend and I went to GAME with loads of his old games that he wanted to exchange for a GAME gift card, which in the end turned out to be worth just over £100! So after he received his gift card, he pondered on what to use it towards. He had two choices, buy a Nintendo 2DS bundle, which included Pokemon X or Y, a carry case, and of course a 2DS, or he could have opted to use the money towards South Park: The Stick of Truth.

He knew how much I wanted to get the Nintendo 2DS bundle for myself and as I’d had a crappy evening the night before and was paying for it with a vile hangover, we decided to both go for it and both went back into GAME to buy a bundle each. They weren’t exactly cheap at £139.99 each, but technically it wasn’t too bad seeing as the 2DS was £99.99, Pokemon X and Y (at the time, the prices have been reduced since) was £39.99, and the carry case was £7.99, so overall it should have been £147.97, so we saved nearly £10 by snapping up this deal! Nice one GAME!

I won’t lie, due to me being on a spending ban (which seems to have been forgotten about since the start of March!) I did feel bad about buying the bundle, as I am meant to be saving up, but my boyfriend knew about my worries and was lovely enough to lend me the money to buy the bundle. I’ve paid him back £100 now and I just have £39.99 left to go! AND as well as that, my savings haven’t even been touched, so that’s great!

So two weeks later I don’t at all regret buying the bundle and if anything I’m so damn glad that I did! I’ve been waiting months to play Pokemon X and now I’ve finally had the chance to, I can’t stop playing it and last weekend I picked up another game, Animal Crossing: New Leaf. 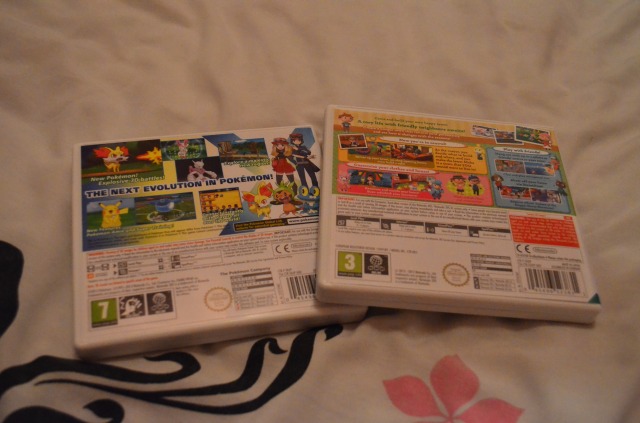 Since purchasing Pokemon X I’ve been playing it on and off and I’m pretty sure I’m not where near half way through yet! I know what I can say though, that I love this game so much and apart from the first hand full of Pokemon games (Red, Blue, Yellow, Silver, Gold, and Crystal), it’s my favourite game! The way it looks, plays and just the things that have been added and taken away, it’s just made this a perfect game to play and finally the makers of Pokemon have done it right.

I already know that whilst it isn’t beauty or fashion related, that I’ll be writing a review or at least a post about Pokemon X as I just love it so much and it still ties into the whole lifestyle theme my blog follows too.

As well as that since the weekend I’ve been playing Animal Crossing: New Leaf on and off too, which I have equally been loving! I’ve previously and still own Animal Crossing on both the GameCube and Nintendo DS and I loved playing both of those, but New Leaf is just a hell of a lot better! I can’t speak much about it so far on here as I’ve only been playing it a couple of days, but I can see me talking about in the future at some point.

I do plan on buying more games for my 2DS in the future so I thought I would share with you all a mini (are six games mini?…) wish list that I have complied together. 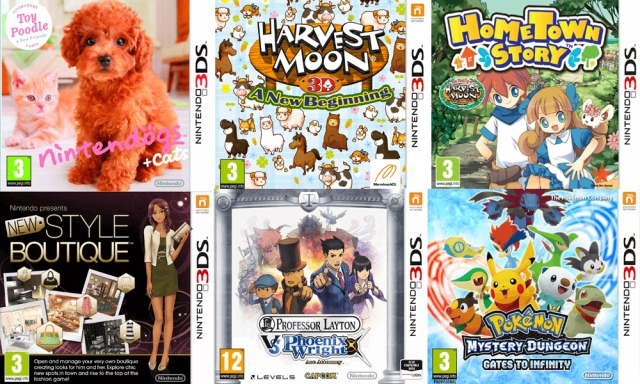 I own the first Style Boutique game that game out on the Nintendo DS and it’s a nice little game to have as it’s fun to play if you love fashion like I do and want a game that will quickly pass the time. I’ve tried two of the demos for this game and I fell in love straight away so I need this in my life as soon as possible. You own your own styling boutique and style customers up in whatever clothes or accessories (or both) that they’re after. In this new version you also get to style men, which you couldn’t do previously. Like I said, I loved the first game so I need this one in my life.

Another game that I own the original of, but my original version is Nintendogs Labrador & Friends. I loved this game back in the day and as sad and morbid as it sounds, I bought it after my dog Magic passed away to somewhat fill the space that she had left behind, as I know you could get cute little toy poodles (the breed that she was) on this game. So with my savings I went and picked the game up, which I’m glad I did. I tried out a demo for the newer version and I loved it! The dogs look a lot more realistic and the little poodle on the poodle edition is adorable! I really can’t wait to get this so I can play more of the game, as the demo only allows you to pet a poodle and a breed of cat, as well as brush them, and play fetch with them.

This game seems rather interesting and as it’s by the same creators as Harvest Moon (which I like somewhat) this does sound like a fun game to pick up if I fancy something new, but I won’t lie, it isn’t at the top of my wish list.

Years ago when I first received my Nintendo DS Lite for Christmas from my Dad, my brother bought me a version of Harvest Moon and only within the past couple of years did I really start get into it and progress with the story! Alas, I’m not a huge fan of the game itself, which is a shame as I did really try to get into it, especially as it was a present. However the new version of Harvest Moon for the 3DS sounds a hell of a lot better and GAME are selling it pretty cheap too, so if I fancy a new game and I’m low on cash, I think I’ll be picking this up. It’ll depend on my mood of course due to my feelings on the Harvest Moon game I currently own.

This game isn’t out until the end of the month and at the moment it’s number one on my wish list. I’ve always wanted to play the Professor Layton games, but never got around to buying any due to how expensive they are! As well as that I rather like the Phoenix Wright games after trying one out on my iPad when my boyfriend I first started going out with one another. So for both games to come together is rather excited and I have been tempted to pre-order the game! I can’t wait to get my mucky paws on this!

Do you own a 2DS or a 3DS? Do you own any of the games I own or have mentioned? Let me know your answers in the comments below!

Until next time, take care all and I hope everyone had a great weekend.