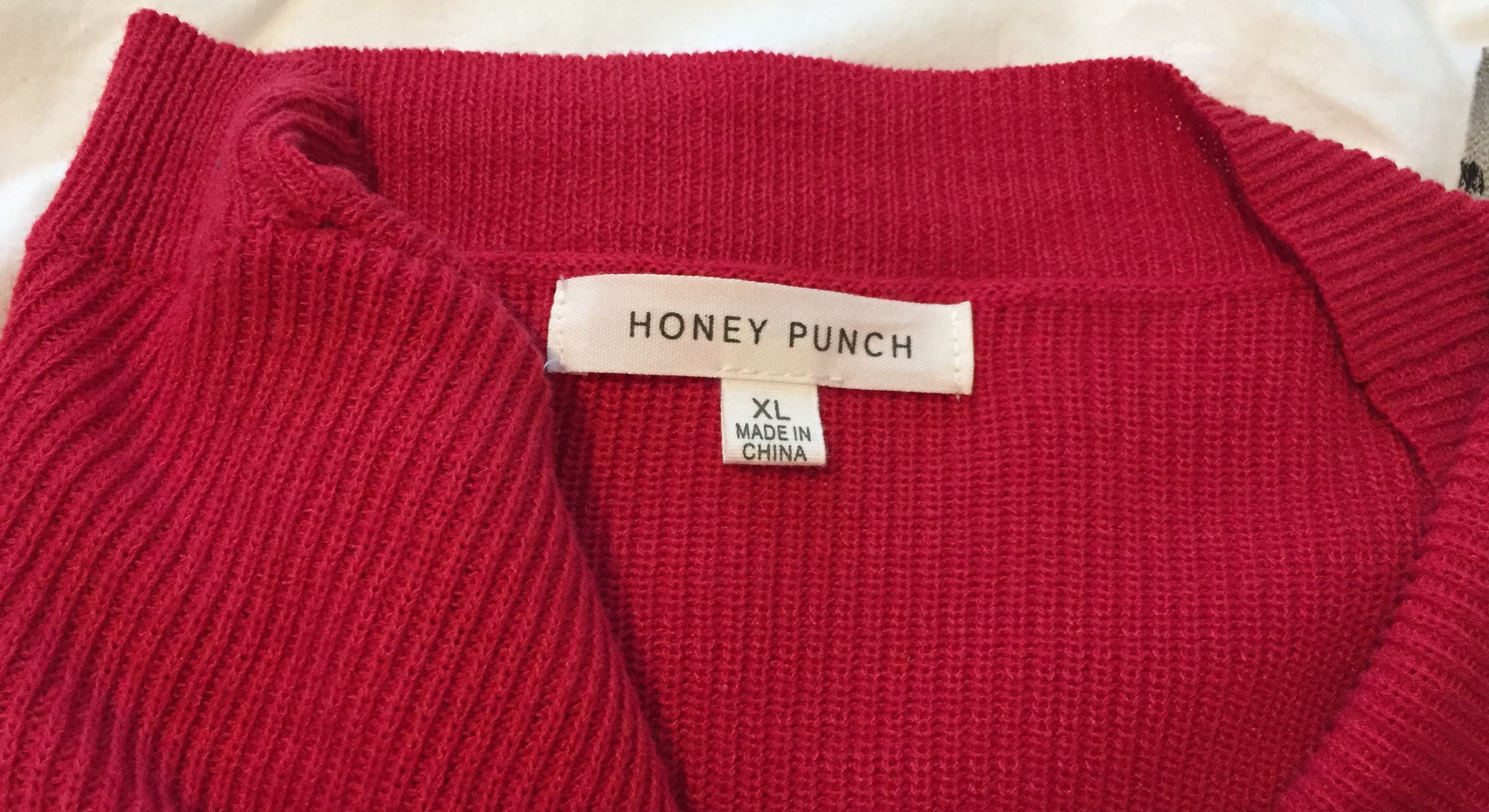 I mentioned this cardigan recently on my March wish list post (which you can read here) as I had recently stumbled across it on ASOS and wanted it so badly, however they didn’t stock my size at the time.

So, me being the patient person I am (well… Sometimes…) saved it to my favourites on the computer, as well as on my phone. Sadly, my size never did come in stock and before I knew it, the cardigan was sold out.

I was gutted, GUTTED. I even went to Twitter and dropped ASOS a tweet asking if it would be back in stock. They told me they weren’t sure but to keep my eyes peeled.

Now let me tell you, I certainly did my eyes peeled. Like a hawk to be perfectly honest with you! Every chance I got I went onto the page to check if it had come back in stock. Last week I noticed it had come into stock, BUT it was in a size XS. Hell, to the no am I that size so I was grumpy about it. Then a couple of days later it came back in a size M and whilst I MIGHT have squeezed into that size… I didn’t want it. Again, I went into a grump and felt like giving up my hopes of it ever coming out in my size again. 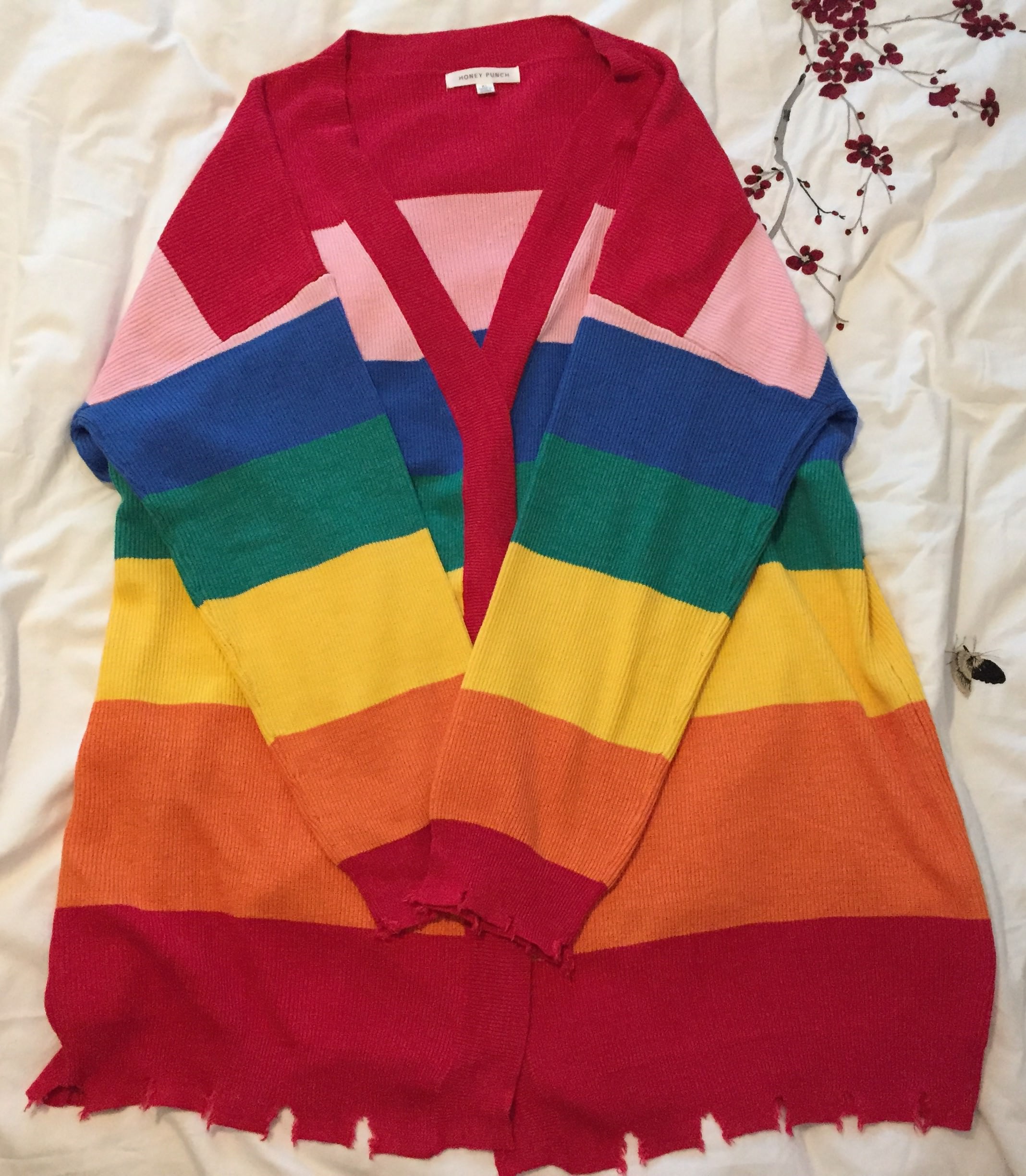 HOWEVER, on Sunday night it did in fact come out in an XL and whilst this isn’t my size, I don’t care about having a size bigger. YES, I have just admitted that I’m an L… Well in this garment anyway. 😛

I was in a spot of trouble however, I’m trying so badly to save money and although I wanted this cardigan really badly and it wasn’t expensive at £35… I was tied.

I’d added it to my basket and was making the steps of going through payment and I stopped. Could I really justify buying this? Did I want to worry about stressing about money? That point was one moments my brain reminds me that I’m an adult and I have responsibilities.

I asked Dane for his opinion and his answer reflected the adult in my mind, he obviously said no.

By the time I had ummed and ahhed about what I was going to do it had sold out. Again, I was gutted that I had somewhat got my hopes up for getting it… But if it was meant to be, it would have been by now. 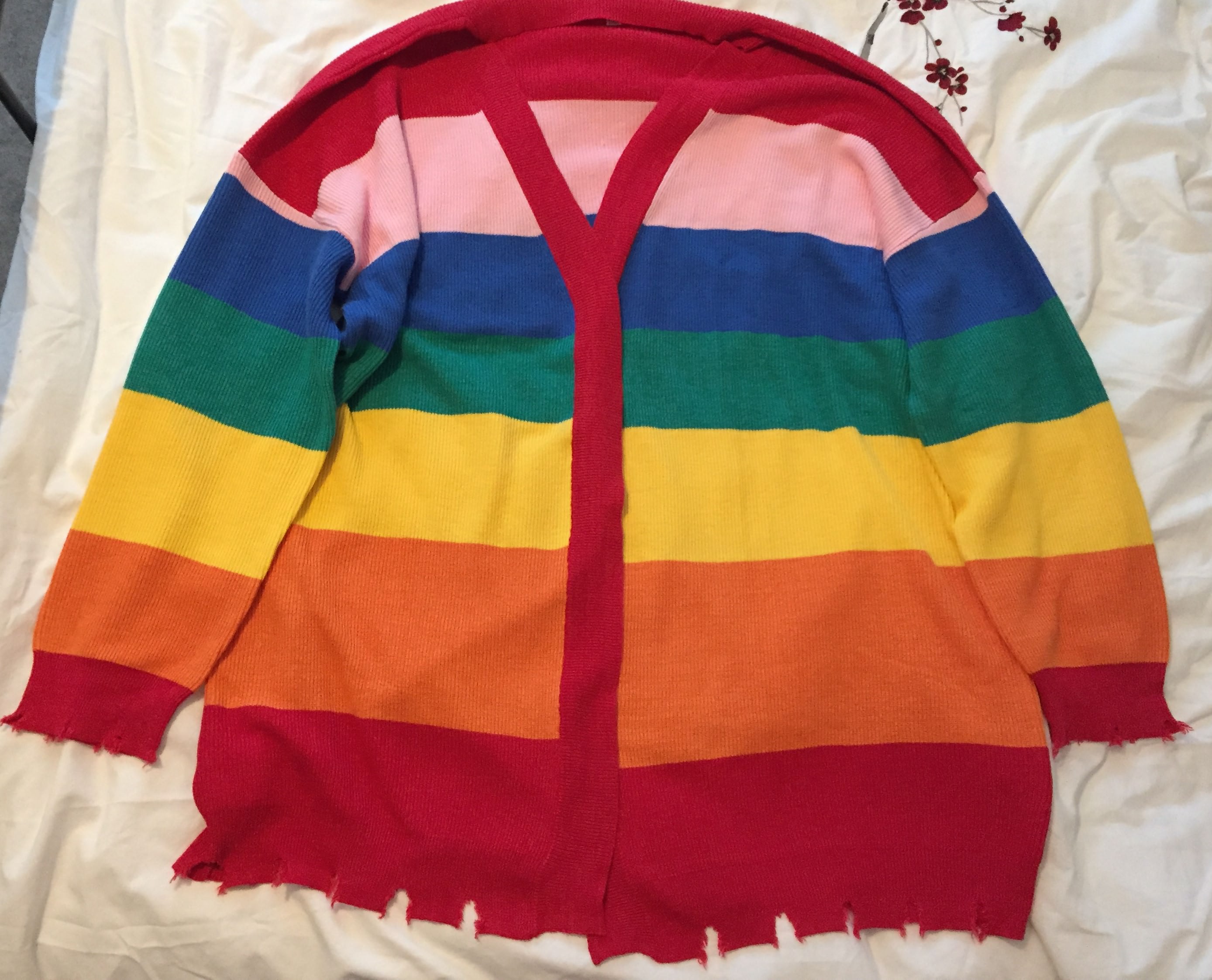 Later whilst talking to my dad, I had a quick peep at the item again as I was vaguely talking to him about it and guess what? The XL was in stock AGAIN!

I quickly asked my dad, “Hey you didn’t get me anything for my birthday, did you? Well that cardigan is back in stock… Want to buy me that?”

I didn’t expect the answer I got, so when he said, “Yeah I can do. Order it and I’ll send you the money.” I was overjoyed!

So, the title of this post is thanks to him. When I showed him what the cardigan looked like he said how it reminded him of the musical Joseph and the Amazing Technicolor Dreamcoat which I liked.

My dad was a hippie back in the 70’s so I’d like to think he would approve of me wearing stuff like this. I remember years before him seeing a coat by Joe Browns that he wanted to buy me as it reminded him of something he’d have worn back then. Sadly, he never bought it for me as whilst I may have worn it, it would have only been a handful of times. 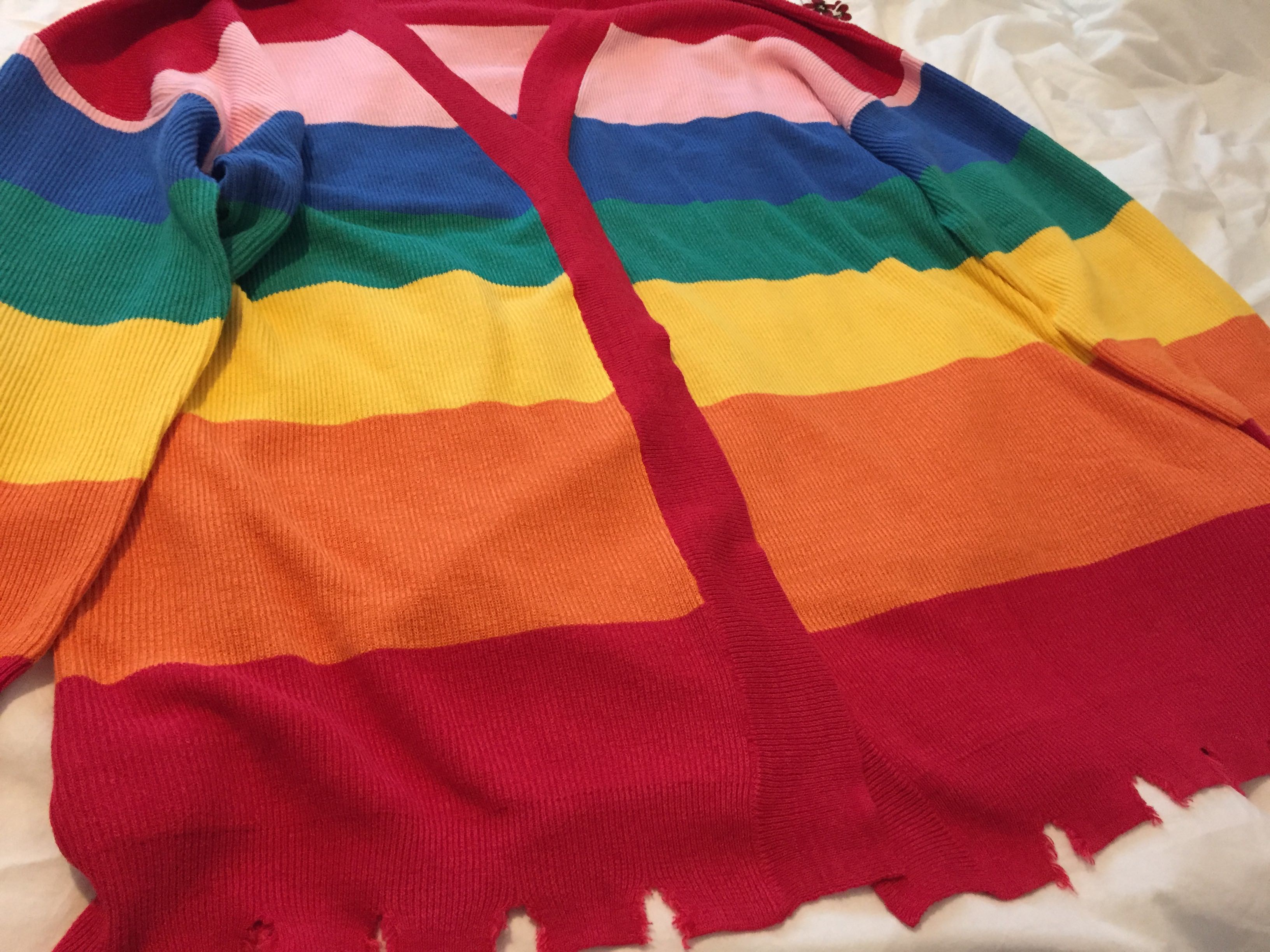 I feel like the unicorn and mermaid trends have come and are still sort of sticking around, BUT I feel like in 2018 there will be a rainbow trend hitting and it’ll hit hard this spring and summer along with the 90’s and grunge trends!

As many people will know, Lazy Oaf brought out their rainbow cardigan last year, (sadly it’s currently out of stock) and EVERYONE went mad for it! I did to be honest with you but by the time I’d even heard about it, it had sold out. Now at £75.00, in my mind it’s a bloody rip off for what it is. Fair play if you can afford and justify the price, but personally £75.00 could be a two weeks food shop for myself and Dane.

Not just that though, after looking more and more at the Lazy Oaf cardigan I can’t say I like the shape of it… It looks snug and comfortable from the back, but from the front it looks frumpy and dis-proportioned. On the stock photo the buttons don’t even look like they’ve been done up properly, if that makes sense? Let’s also add, the model looks fucking miserable on the Lazy Oaf website.

I gave up on the idea of ever getting the Lazy Oaf one. As I said, it had sold out everywhere and whenever I looked on eBay and Depop for people selling it, people were either charging more for it than it originally sold for or they were selling fakes. I must give it to people on Depop, they were honest about them being fake, BUT they were using photos bloggers had taken and obviously used on their posts or social media. A good example of this can be the one of YouTuber/blogger Helen Anderson with someone else. It’s a shame this image has technically been “stolen” to be used to make people money online. Yuck, not cool!

So now I had my own rainbow cardigan! I ordered on the Sunday night and my cardigan arrived Thursday. VERY quick for free delivery, which I was equally happy about! It arrived whilst I was at work so I was excited to get home to see it. 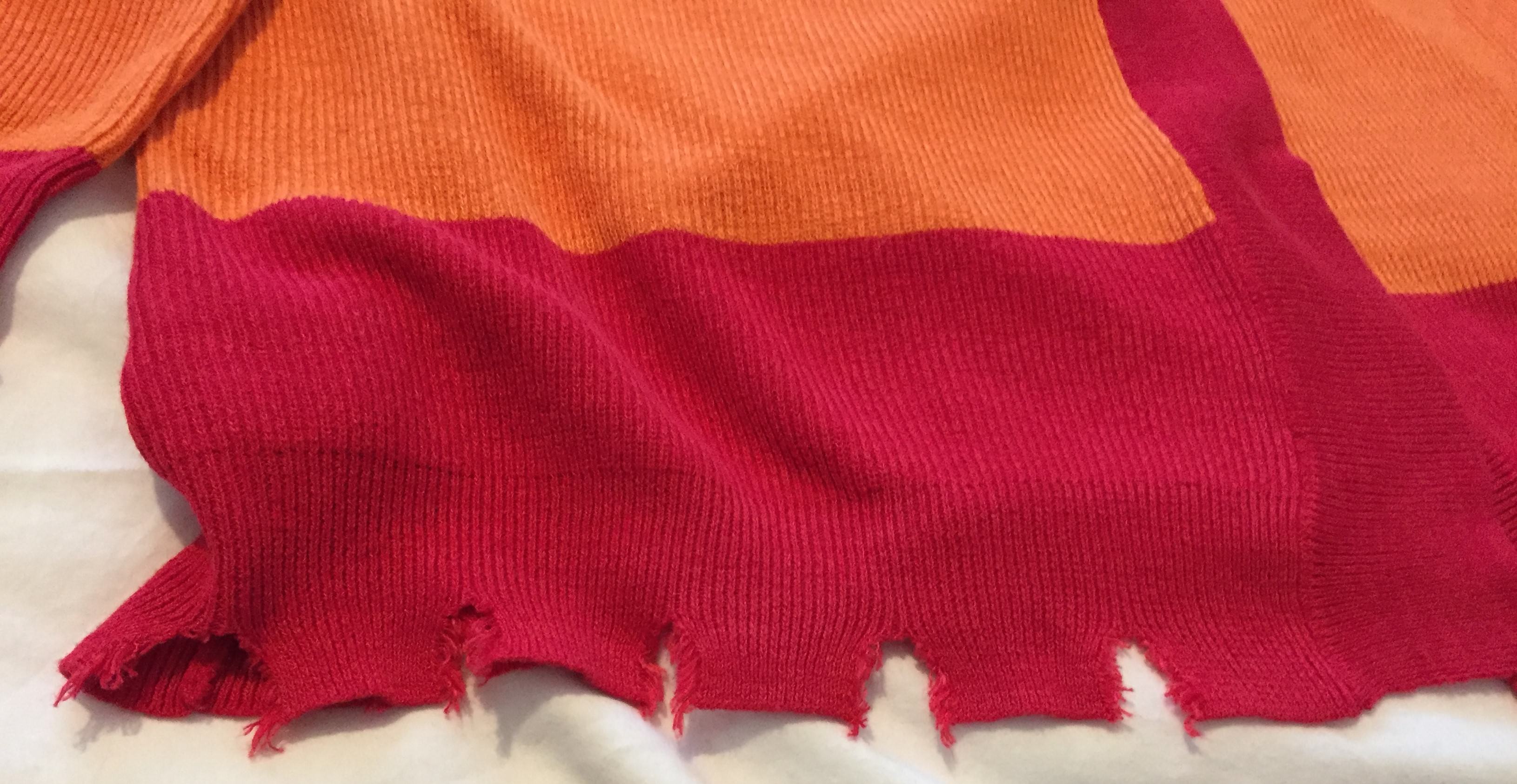 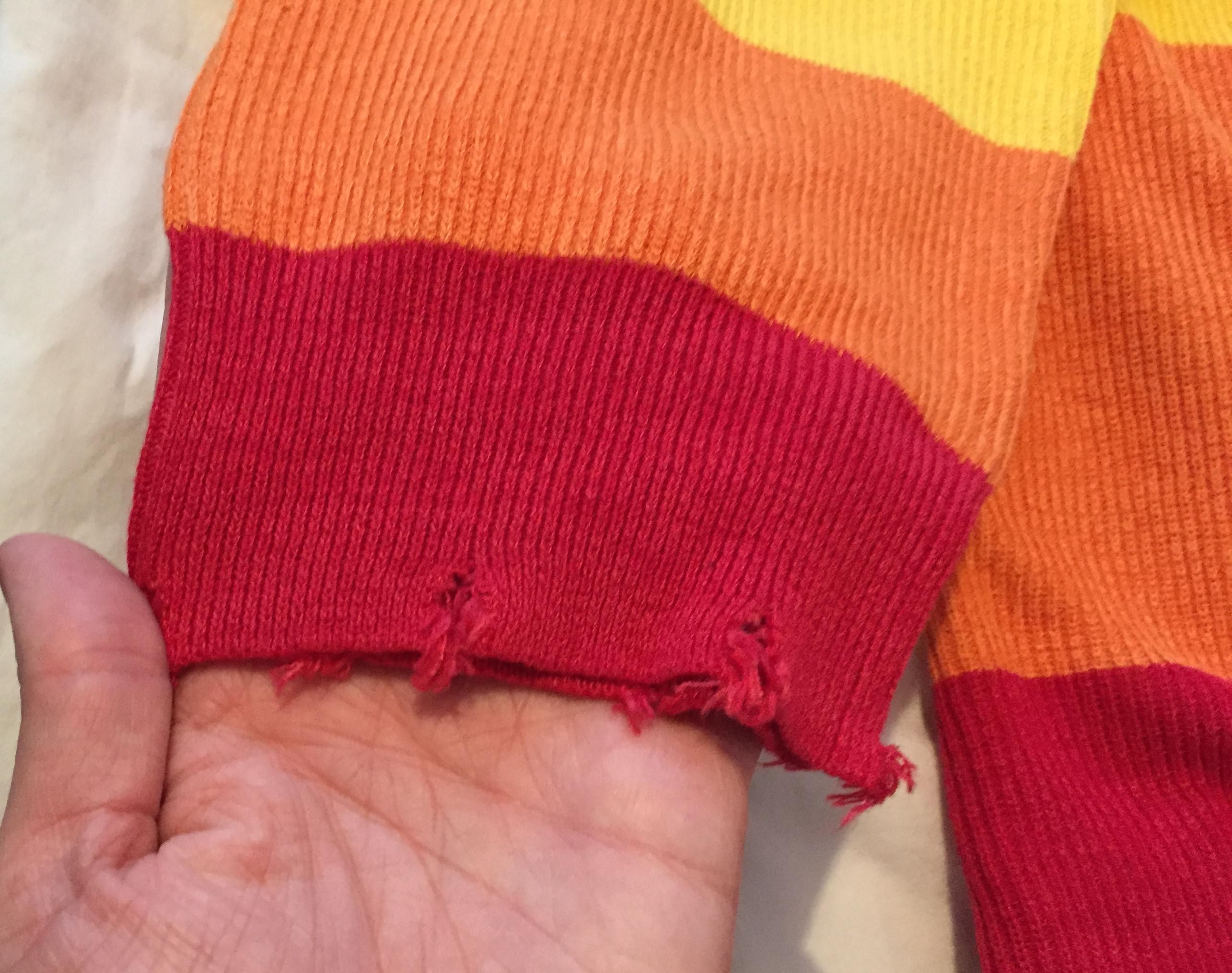 Let me tell you, when I opened the package and saw the gorgeous and colourful rainbow stripes looking up at me, I felt happy. There is just something about rainbow stripes that remind me of when I was a child and throughout my early teens.

When holding this in your hands this cardigan can feel quiet heavy… I hope that makes sense! However, when you wear it it is weightless and let me add, extremely comfortable! 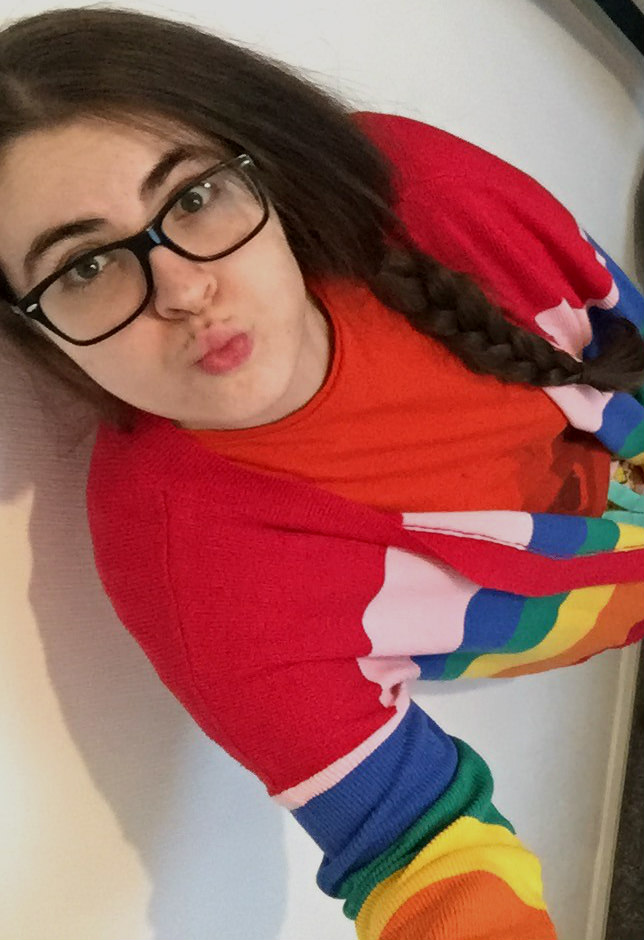 As I mentioned before, I picked up an XL when usually I’m an L and whilst this cardigan is oversized, I didn’t expect it to be as big as it actually is! I worried it was a little too big, but to be honest it makes it incredibly comfortable.

It doesn’t remind me of a cardigan to be honest due to the size and if anything, it’s more like a huge blanket! 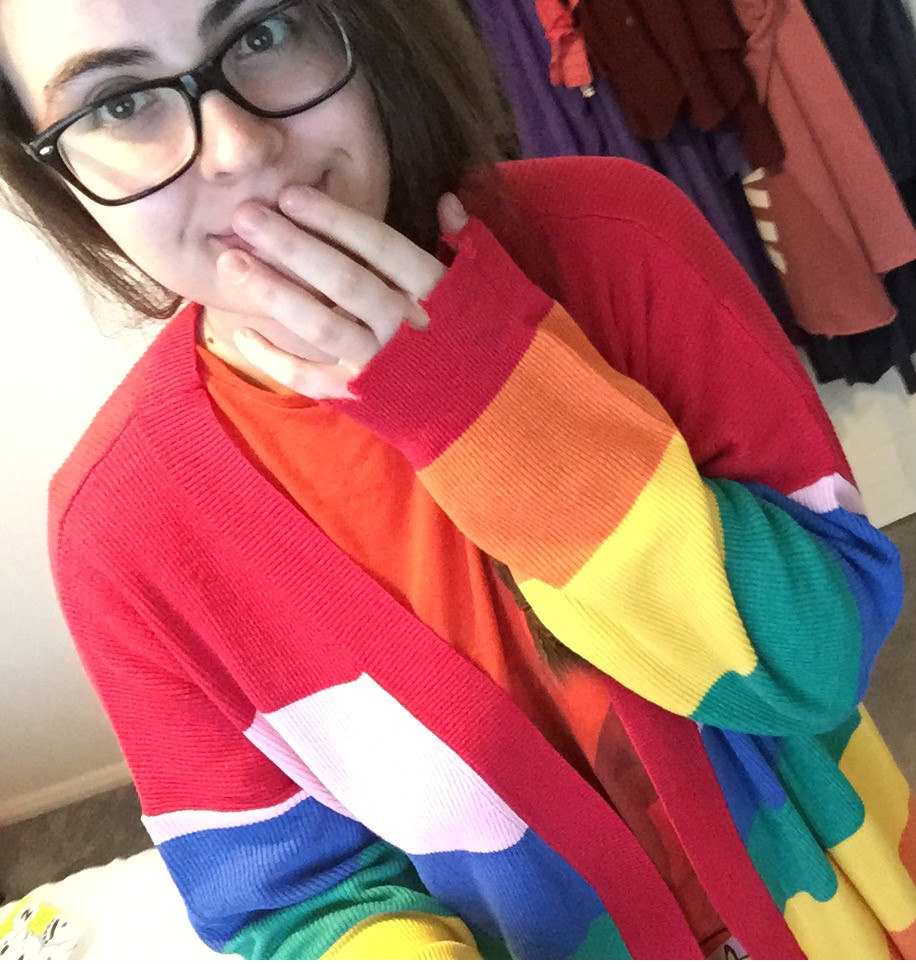 I wore it for the first time at work on Monday and oh man I loved it and I loved that everyone else did too. I feel like pieces like this can really brighten people up, especially yourself. I had a crap drive to work that morning due to the snow so wearing that cardigan was lovely.

I also wore it out the day after on my day off for my dad and daughter day so it was lovely to finally be able to show it to my dad. To say he loved it is a massive understatement.

This is definitely one of my favourite fashionable buys in a long, LONG time. It’s so unique in every way and even has distressed sleeves and at the bottom of the cardigan itself.

What do you think of the rainbow trend that has appeared? Do you love it, or hate it? Make sure to let me know in the comments down below!

Until next time, I hope you guys have had a great week so far and it continues that way!

6 thoughts on “Me and My Technicoloured Cardigan”