At the time of writing this blog post I am in the middle of packing for a little weekend to London (which I mentioned a couple of weeks back here) to see my friend Sophi, as well as go around London for some shopping and coffee and bubble tea dates. 😛

I can’t believe how quickly this month has gone though, but at the same time I feel like it’s really dragged… Maybe it’s due to autumn setting in with darker nights and such like that. Meh, it’s November and with that it is almost Christmas too. Damn.

This months wish list wasn’t too bad to write to be fair, I sometimes worry I struggle to try and think of beauty and lifestyle things each month that I’ve loved.

So, enough of me rambling, on with the favourites! 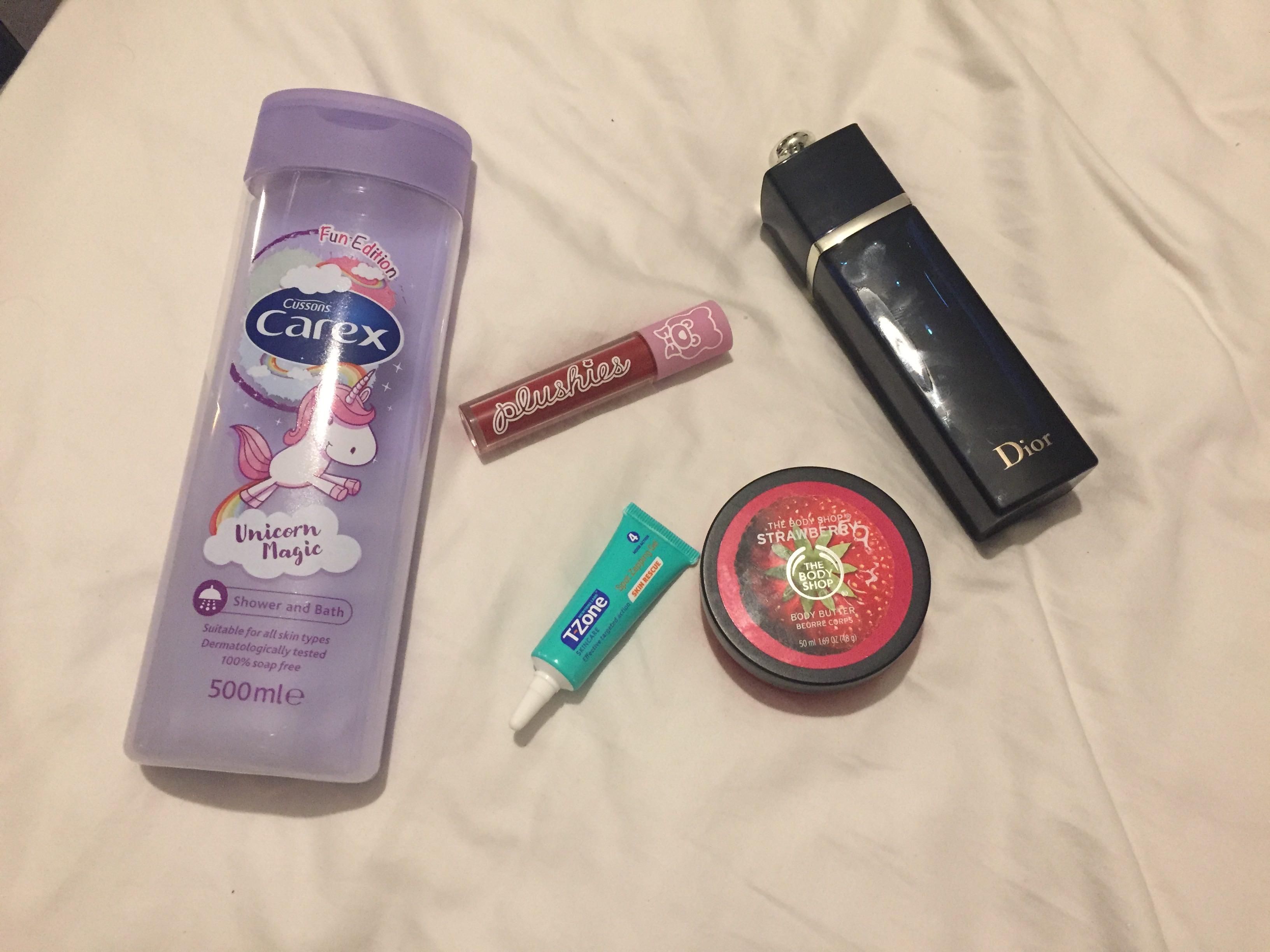 I have been loving this bubble bath throughout the month. It’s definitely bath season again and I have been loving having a good soak on my weekends off work, especially Sunday’s! This unicorn magic range by Carex is amazing and I have honestly been loving it and for just a £1 for each item, it’s such a bargain. I picked the hand wash and shower and bath up from Savers for that price, but I’m sure you can find them in Poundland and such for the same money too.

I recently reviewed the two Lime Crime Plushies that I own and I love them both SO MUCH! They’re definitely my go to lipstick at the moment as I love how they feel, as well as how long they last. I couldn’t get along with Cherry Soda at first, which really disappointed me as this was the shade I really wanted the most from this collection. Finally, I have started to get along with it and I’m so damn happy! It’s a gorgeous cherry red colour and it’s just beautiful. I especially love how these colours give a sort of blotted effect to the lips.

I’m really loving The Body Shop lately and I do not apologise for featuring at least one product every month lately for the past God knows how many months! 😛 This month I have been LOVING the strawberry body butter, which I’ve been using on my hands at work and on the go. I know it’s a body butter, but I just don’t get along with The Body Shop hand creams that much. They’re just not “strong” enough for my eczema. I got this free in a gift set due to spending a certain amount in The Body Shop and I do love it. It’ll definitely be something I’ll pick up in future to use for my hands. Of course I can only imagine this is amazing for the body too!

This has been a GOD SEND to me lately! I don’t know why but my face just broke out in zits for what felt like a month, which was horrible. I always get zits around time of the month and that’s normal to me. It’s a sign of (sadly) what is to come and I am used to that. A whole month of them though? IT SUCKED! They were all on the left side of my face, as well as my jaw line which I found so odd. It might be where I rest my head on my hand at work or something, I don’t know. I just pop a little bit of this one before my moisturiser in the mornings and as and when I need it. It’s only 99p from places like Body Care and Savers and it lasts AGES! Definitely worth picking one up if you still get the odd zit on and off. Honestly kids, I’m nearly 30 and I still get zits! 😛

This is one of my favourite perfumes and I always graviate to it when the colder weather comes. It’s such a gorgeous and unique scent and one I really love. My mom bought this for me when I was 25 and thankfully it hasn’t gone off! She bought it me for my birthday when we went to Fuerteventura together for our birthday’s. I don’t know how to describe the scent to be honest with you, it’s strong and bold and it’s something that definitely stands out. It’s floral but to me it smells kind of sweet as well. It’s definitely a mature perfume and I’d be surprise if anyone 21 and under wore it! Dane loves this too, so I like when I’m wearing it and he comments. 🙂

I remember me and Dane watching Big Mouth when it first came out and we was in Fuerteventura at the time. It was hilarious and definitely something different at the time. It recently came back for a second season and it’s just as funny as the first! I especially love that in one of the episodes they had a sexual education approach to it, it worked so well and they did such an amazing job. I think shows like this need to definitely be shown in schools, swearing or not it gets the message across (in a very funny way) about puberty and basically the flaws of being a teenager. I really hope this gets another season next year!

I remember seeing the trailer for this on Instagram and I KNEW I had to watch it! It reminded me of a book I would have read growing up. I didn’t realise it was a film until me and Dane put it on. Netflix usually shouts TV series to me so that’s what I expected this to be. Alas it’s a film and one I rather liked. I wouldn’t say loved, but I’ll touch on that. It’s a good film, especially being set now but at the same it’s so bloody cringe it’s crazy. I definitely recommend watching it, as it was a good watch but I don’t feel like I need to watch it again. I do wonder if it would have worked better as a TV series… But do we have too many teen drama series on Netflix right now? Nah not really. 😛 Let’s put it this way, this isn’t like My Mad Fat Diary, that show is amazing. 😛

I recently bought volume 3 of this manga and like all the others, I LOVED it! The art style of the manga is always amazing and for a spin off series I actually find it’s better than the original! Kanna has been a massive hit with all sorts of people and when you read the manga and watch the anime you can really see why. She’s adorable and I certainly fell in love with her, so it’s no wonder that they created a manga series based on her! They’ve now released pre orders in the UK for a manga series based off of Elma, who is my favourite dragon out of the bunch! She just reminds me of me with her love of food and the fact she works in an office, haha. If you love Miss Kobayashi’s Dragon Maid the manga or the anime (or both), then you need to read Kanna’s Daily Life!

Okay I know this isn’t music, but it’ll do! I discovered this podcast randomly online and I just had to listen as it’s bloody hilarious! This guys dad has written a porno and with the help of his two friends is reading it for us all to hear! I started listening to it towards the start of October and it’s hilarious. I didn’t actually think I’d still be listening to it now! I’m currently on series 2 and book 2! If you fancy a giggle on your way to and from work, then give this a listen. It’s pretty cringe but fuck it’s hilarious! Obviously if you don’t like listening to sexual sort of stuff, meh you won’t want to listen to this. I have an iPhone and if you search in the podcast app, you’ll soon find this to listen to!

I was going to actually mention Kingdom Hearts this month but to be honest with you that game has made me rage quit various times, it hasn’t been a favourite… Although I have enjoyed playing it! This game came out just over 2 weeks ago but me and Dane have played it together almost daily! I’m so glad he’s wanted to play this with me so much, as I worried he’d get bored with it after a few days. I do love playing the LEGO games and I’ve mentioned my excitement for this game quite a lot on my blog lately (which you can read about here). It plays really well to be honest and it’s definitely up there as one of my favourite LEGO games to date! The detail in the customisation is incredible and so in depth. Both me and Dane have made out super-villains and at the time of writing this post, the story has BLOWN UP and some serious tea has been spilt. 😛

SO those are my favourites from October! I still can’t believe it’s November now! This year has seriously flown by and it’s crazy. Next month I’ll have been in my job a year, Christmas will be around the corner and soon enough after that I’ll be turning 29. Urgh.

What favourites have you got from October? Make sure to let me know in the comments down below!

Until next time take care all and I hope you’re all ready for the weekend.