It’s September, my favourite month of the year! I’ve been so excited for this month as each weekend passed throughout August. I don’t exactly have loads planned for this month but I’d like to try and do as much autumnal stuff as possible to be perfectly honest with you.

September also brought some exciting stuff for There Might Be Coffee, with the launch of my monthly newsletter! This went live last night, so please make sure to go and subscribe to get some extra content that you won’t find on my blog or social media pages. 🙂

This month I found myself discovering old favourites, as well as some new ones. I’ve been rather excited to share with you my monthly favourites for August, especially the general favourites too.

Anyhoo, on with the favourites! 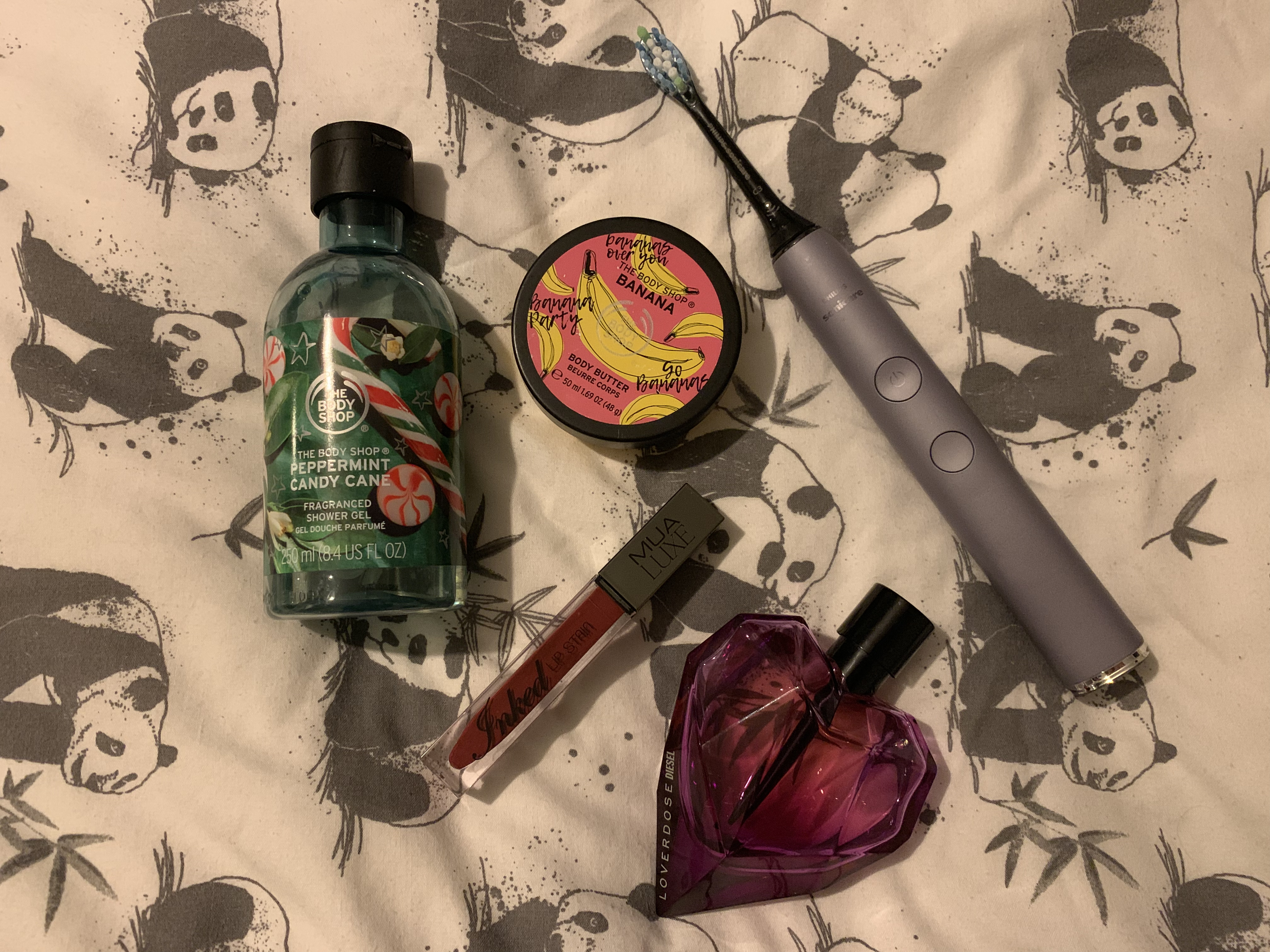 This is by far one of my favourite perfumes. It was my friend Jacqui who introduced me to it back in 2011 when it first came out. It has such a unique scent which smells sexy and adult. It was the perfect perfume for when I was 21 and I adored it, as I still do. When I want to smell sexy and like I can do anything, I put this on! I have a feeling this is my third bottle now, but this bottle seems to be lasting ages. Honestly though, I love it. If you haven’t, make sure to go and give it a sniff! I can’t believe it’s been out for almost 10 years. Shit, I’m old!

I’ve owned this shower gel for quite a while now… Since the Christmas sales in fact. I decided I didn’t want to use it until the warmer summer months, as this has a slight tingling effect to the skin, which I really like. I started using this back in June to be honest when me and Dane went to Manchester and I forgot how yummy it smells, as well as how lovely and soft it left me feeling. I honestly wish this scent was permanent as it’s gorgeous. It really does remind me of winter and Christmas, especially as one of my go to hot drinks is a peppermint hot chocolate! I’ve noticed these do pop up during The Body Shop sales, so keep eyes peeled if you’re still interested in this shower gel.

I don’t know what it is anymore these days, but I’m really not arsed about make up anymore… I wasn’t before to be fair so how I’m not now is a mystery! I love wearing lipstick, don’t get me wrong, but sometimes it can feel like too much effort. However lately I have really enjoyed wearing lip tints again and I have especially enjoyed wearing this gorgeous hot pink colour! I only apply it into the centre of my lips so that it gives an ombre and soft appearance. One thing I’m excited about when I go to Japan is picking up some of their lip tints. They’re really good! I’ll definitely be stocking up.

As regular readers will know, I don’t use The Body Shop body butters on my skin, but instead my hands. Even though I just keep this in my handbag as something to use whilst on the move, I’ve actually been reaching for it in the morning before I head to work, as well as when I get home. I still love the scent of this and aside from Strawberry, this is by far my favourite scent that The Body Shop have ever released!

This has been one of my favourite big purchases this year. I already know regular readers are thinking, “Nat, don’t you already have an electric toothbrush?” Well… I’ll explain… Back in my April Favourites I mentioned that I was gifted an electric toothbrush from my mom. Well that shitty thing decided to break on me and Dane randomly, not once but TWICE for the short 4 months that we owned it. To be rude and blunt, do NOT buy anything from LAB. They seem like a company who talk the talk, but can’t produce decent products. This isn’t the first time either me or my mom have purchased items from this company and had issues. The toothbrush first of all broke because it wasn’t holding its charge. This went on for a few weeks, then suddenly it was fine! Odd, right? Then (and we don’t know how!) the on/off button got stuck and due to that it was little loads of water into the brush and yeah. Me and my mom sent the brush back and she was given a full refund! Since then when I looked on the website we bought it from (QVC) the toothbrush was no longer for sale and reviews were VERY poor. Crap company, DO NOT BUY ANYTHING!

On with the Philips toothbrush anyway! It’s amazing and me and Dane bought it in the official Philips sale too, so we snagged a bargain. This toothbrush has all sorts of different settings, as well as an app you can use alongside it which tracks any teeth you may not be brushing as much as others. If you do miss brushing certain areas of your teeth, the app will take you back to that area and ask you to brush more to ensure your teeth are “clean”. I love this! You can set loads of different things too, such as whitening, plaque fighting and more! It’s an amazing toothbrush and I cannot recommend them enough. OH and it doesn’t lose much charge either. 😛

I swear, I LOVED this show. I haven’t laughed so much at a show in quite some time (not including comedies!) and it made me realise just how much I miss Kathy Burke in the comedy world. In this 3 part series on Channel 4, Kathy Burke is talking about women (if you hadn’t guessed from the title) and herself as a woman. She covers topics such as having babies, marriage, relationships and beauty. It’s so insightful in ways and I found myself shouting, “YES KATHY!” at my TV throughout. She covers things that I have spoken about on my blog in the past, including my thoughts on having children and getting married. Man or woman, give this show a watch. Kathy is amazing throughout and I honestly want her to do more shows like this in the future.

I know these seem like random movies to add to this post this month, considering they’re from 2012 and 2018. I didn’t watch either of them in the cinema and it was only recently at a friends house that we put a movie on to watch in the morning/afternoon with the kids. I’d never seen Wreck-It Ralph so it seemed something good to put on. I think I was acting more like a kid than the actual children were haha! I was poorly recently and had to stay at home from work, so decided to watch Ralph Breaks The Internet whilst I was in bed. These films are amazing and I understand why and how they did so well when they released. Something my friend commented on however that I agree with is that the films HARDLY focus on Ralph at all… Either way I feel these films were definitely made for adults in mind more so than children for the nostalgic feel alone. I can’t speak for America but I feel these days the only places I see and/or hear of having arcades is Japan… But again. I can’t speak for elsewhere other than the UK.

I’ve finally started to get back into reading manga again and it’s making me so damn happy! I love being able to just sit and chill with a couple of volumes of my favourite manga series during the week. When I was poorly recently and I was in bed resting I read some manga and caught up on loads of the Kanna’s Daily Life series. I love this spin off series from Miss Kobayashi’s Dragon Maid as it’s so damn cute and you get to find out more about Kanna along the way too! There is also Elma’s Office Lady Diary, which is of course about Elma, who in turn is my favourite out of the dragons! 😀

Favourite Music – PVRIS – All We Know of Heaven, All We Need of Hell.

If there is an album I LOVE right now it is this one by PVRIS. I only discovered this band in April thanks to KERRANG! Radio and they have fast become one of my favourite bands now. I listen to this album daily in the week, as I always feel the need to give it a listen during my shift at work, either at the start of end of the day. Depends on my mood. I love every single song on this album but my favourite is definitely “Winter”. I could name more songs but I thought I would just mention the one I listen to and love the most. 🙂 PVRIS recently announced 3 dates for a UK tour and they sold out in minutes. I doubt I could have made any of the dates anyway, but I’m gutted all the same. I really wanted to go see them live. 😦

I can’t remember why or how but me, Dane and some of our friends randomly decided one day to set up a server so we could play Minecraft all together and we played it so damn much throughout August! I do love Minecraft and definitely go through phases of playing it, depending how busy I am or if I’m playing other games. Sometimes it’s great to come home after work and just want to chill on the sofa in front of Minecraft with a beer and some friends on chat. You can now get foxes on Minecraft too, but I don’t know if we can on the version we have on Xbox One. 😦

So, those were my favourites from August! August did really fly by to be fair, which I’m glad about, purely because I love September so much. I hope to bring some exciting autumnal posts your way this month.

What were your favourite things in August? Make sure to let me know in the comments down below!