Happy Easter everyone! I hope you’re having a lovely bank holiday so far. At the time of writing this, I’m really excited for my Easter roast that I’m cooking with Dane as well as our chocolate eggs. I’m also planning to cook some mini egg brownies or cupcakes and send half over to my parents and keep half ourselves. I’m not sure which to bake yet, but brownies are looking to be the choice at the moment. I’d buy some cream too to pour over the top, or maybe some custard? OOFT!

Anyhoo… Enough of yummy food. This months wish list pretty much contains items I’ve bought/pre-ordered or hoping to pre-order VERY soon. I’m still looking to be on a spending ban in April because I’m finding it really handy to keep track of what I’ve bought and when, as well as WHY I’ve bought something.

An example of this being March. At the start of the new spending ban month, Black Milk Clothing had brought out their second Pokemon collection and I know I wanted to pick up a few pieces from it. They’re both limited and wouldn’t be brought back, so I bought them. I think items that are limited edition, or rare items found on eBay are acceptable within reason.

Another example, I found one of my holy grail Loungefly bags and it wasn’t cheap. It was a reasonable price considering, but not cheap. I’d seen a piece from Black Milk Clothing’s latest collection (The Thirteenth Tarot) that I wanted to buy, as well as a piece from the first Pokemon collection in the sale. I haven’t bought these pieces due to buying the bag. Granted, I didn’t need any of these things but… I wanted the bag.

Anyway, I digress! I’m really excited to talk about the items on my wish list this month. I hope you enjoy reading as much as I enjoyed writing this months wish list post! 😀 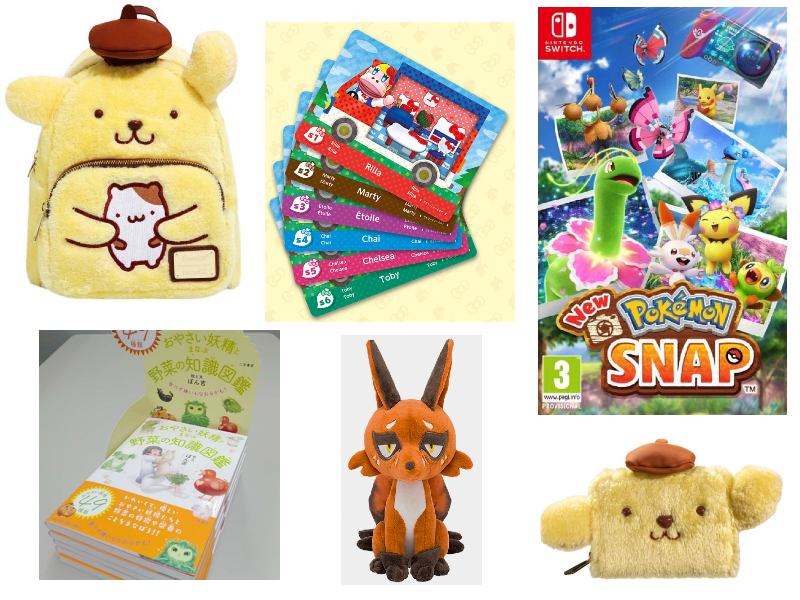 This is something I didn’t think I’d ever own, even though I really wanted it. PonkichiM is a Japanese artist I discovered well over a year ago now thanks to Twitter and now I’m able to own their art book which is full of their cute vegetable animal hybrids that the artist calls faeries. I told my friend Emily (who I met through Instagram) about PonkichiM a while ago and she fell in love with the artists designs too, which did not surprise me! So, when Emily told me she was going to order the knowledge/art book from Amazon Japan and wondered if I wanted one. I jumped on it and when it arrived at hers I paid her for it. 🙂 Her boyfriend was kind enough to bring it over and post through the letter box and it’s GORGEOUS! I’ll be showing this off in my April favourites later this month for sure. 🙂

I decided to merge these two items together as I have a STORY to tell in regards! So, I’d pre-ordered both of these items through Geekcore and they were both due to come out in April. However earlier this week I received an email saying that this and a few other designs had been cancelled in the UK due to failing quality control… Which sucked. I’d not exactly had the best day so to hear this news was devastating to me… 😦 I’ve had a full refund and I’ve pre-ordered through an America seller I’ve bought from before. I don’t 100% know when these will be out, but I hope sooner rather than later as I cannot wait for these to arrive. They’re gorgeous fluffy bags and of course feature my favourite Sanrio character, Pompompurin. I do feel I’ve paid far too much now to get him into my life, but I guess it’s… Kind of worth it… :’)

I do feel bad buying fake amiibo cards, but at the same time I don’t when Nintendo is pissing their UK fans about. There. I said it. We were all told by Nintendo UK the end of March, but the worldwide release was the 26th March, which we assumed would be the same here. I waited all day to order a pack of cards, as did others, but nothing dropped. I started to come to a realisation that IF the cards had of come out that day, I probably wouldn’t have gotten any anyway, due to the fact SO many people want to get a packet of these cards, as well as scalpers trying to snag them too. So, I decided to buy some of the custom made ones and when the real cards released, I’d get those too. You know what? Nintendo UK decided to release the cards on the last day of March, without much warning and they sold out quickly, with some cancellations and refunds given to people by Nintendo due to overselling. I know they also released some more packs on the 1st April. I missed both drops and was gutted. I have some big plans for my Sanrio cards and items, which I’m so excited about!

If there was one Pokemon from Sword and Shield that I fell in love with and called my favourite from that gen, it’s Nickit. The cute little fox Pokemon that specialises in dark moves. I just fell in love and caught one as soon as I could in the game. Sadly it didn’t follow me all the way to the end, but for the start of my journey in Shield, it did me good. I’d waited patiently for a Nickit plush to come to the Pokemon Center and FINALLY it is time! I’ve pre-ordered my plush through YY Kawaii (Instagram – yykawaiimerch1) which I’m excited to have arrive in the upcoming months! Make sure to use code “YYCOFFEE10” to snag 10% off of the website!

Finally we have a game I’m SUPER excited to see come out at the end of the month and that is the New Pokemon Snap game coming to Switch! I never got to play the original Pokemon Snap on Nintendo 64 as I never owned one and neither did any of my friends. I always have a fond memory of going to Dixons with my dad and running to the back of the shop to play on the N64 that was set up at the back of the shop with Pokemon Snap inside that you could play. I never got the chance to play it every time I ran to the back of the shop, because there was always a kid, or at least a group of siblings stood there hogging it. So, this coming out will be like a part of my childhood I missed out on. 🙂 Eventually I’ll snag the Pikachu N64 AND Pokemon Snap so I can play it myself, at home, without the worry of some selfish kids preventing me. 😛

So there we have it guys, that is my wish list for April and I feel like I’m already skint. 😛

I’m so excited for April, Easter break so far has been amazing, I’m looking forward to my roast and Easter eggs, as well as Dane’s birthday in a couple of weeks time. 🙂

What do you guys have on your wish lists for April? As well as if plans you may have for April too? Let me know in the comments. 🙂

Until next time all, take care and HAPPY EASTER! 😀