GUYS I have been so excited to write and bring this blog post to you today! I told you May’s content is going to be super cute and it’s being kick started with my new Loungefly backpack.

As regular readers will know, I’m a Loungefly fan, not as big as having a massive collection, but enough that I know my stuff about them and more. I’ve been a fan of Loungefly bags since 2007 when I bought myself one of the Loungefly x Skelanimals shoulder bags. Unfortunately after a few uses at college, it broke and I took it back to the shop I bought it from for a full refund. I wish I’d gotten a replacement instead. I adored that bag, I was an emo back in my college/early university days and that bag was me all over!

Fast forward a couple of years to about 2009 and I received my first official Loungefly bag for my Christmas/birthday present. It was the same shoulder bag style but this time with Bambi, Thumper and Flower on it. I still have it somewhere at my mom’s house. I loved that bag and used it for university all the time, as well as for my laptop to carry it to and from places.

Fast forward to over ten years later and I now own fourteen pieces! Now, I don’t want to call myself a collector, but a lot of people will hear how many Loungefly items I own and probably want to call me that. I don’t usually refer myself as a collector with Loungefly as I’ve seen collectors and I’m not like they are, in regards to the amount etc. I often use all of the bags I obtain and don’t have them for display. I use them, because that’s what they’re for! 🙂 Not to have a dig at collectors, I get it as a Pokemon and Nendoroid collector. Just, collecting Loungefly isn’t my bag… Get it… 😛 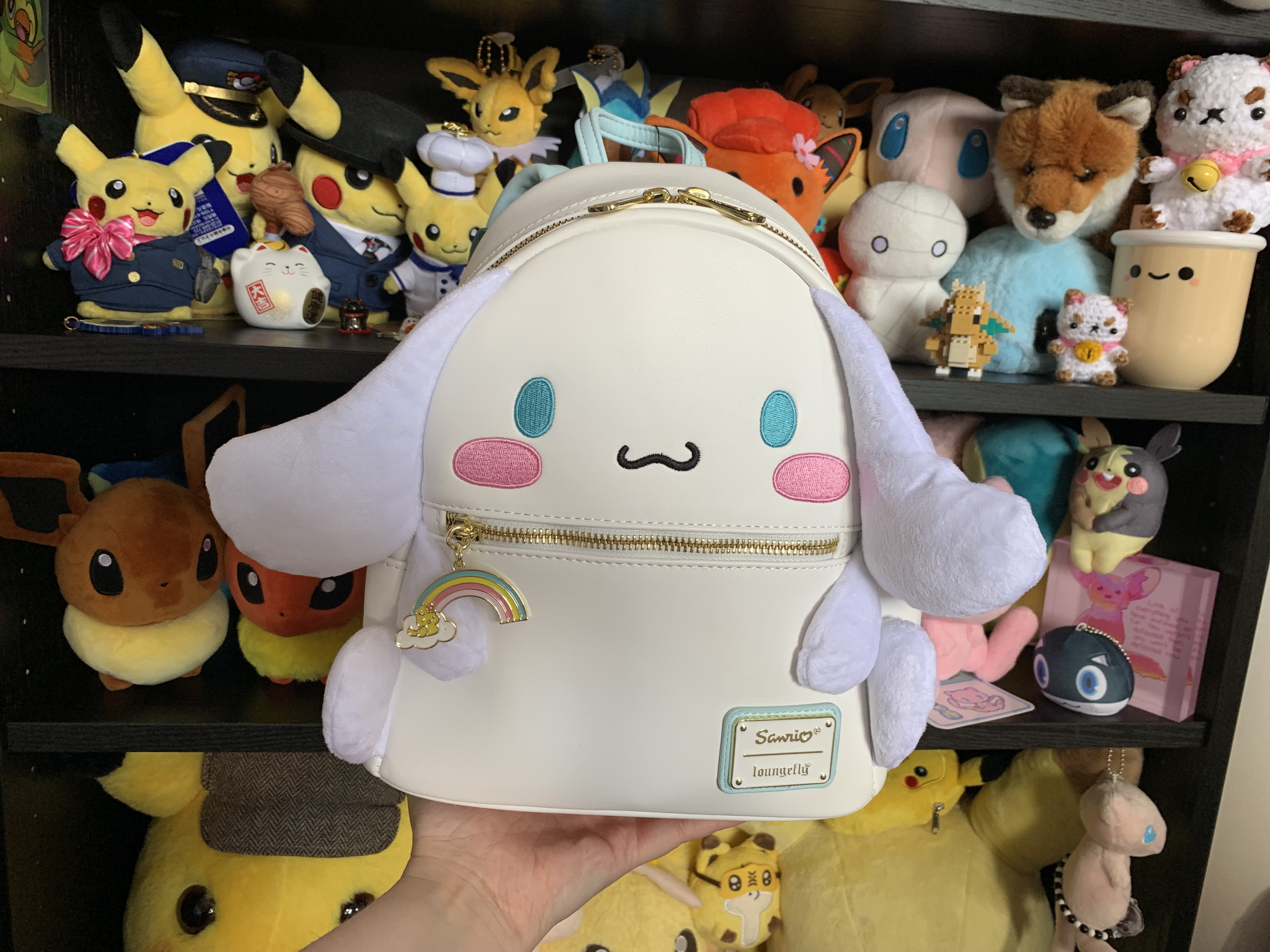 Anyway, that aside, I’m really excited to show you guys my new addition, the Cinnamoroll backpack!

The Cinnamoroll backpack was announced around the end of summer last year ready for release at the start of autumn in September. I remember pining after the backpack for the longest time but just couldn’t bring myself to buy it due to saving money. Plus, I have a nice collection of Loungefly bags I’m currently happy with and didn’t 100% feel the need to add a new one into the mix. Around December I did find someone selling one second hand (barely used from memory) on Vinted for a steal! For months after it sold, I regretted not picking it up.

Just before Easter I decided I wanted to get the Cinnamoroll backpack. I’d seen so many people picking it up and showing it off, that it just caused some major FOMO in me! This being said, I couldn’t find it at a good price anywhere! If there’s one thing I really don’t like about Loungefly these days it’s the prices for the quality. The quality has gone down significantly since Covid, but the prices have really gone up! I mean, would you pay £80 for a backpack? No. 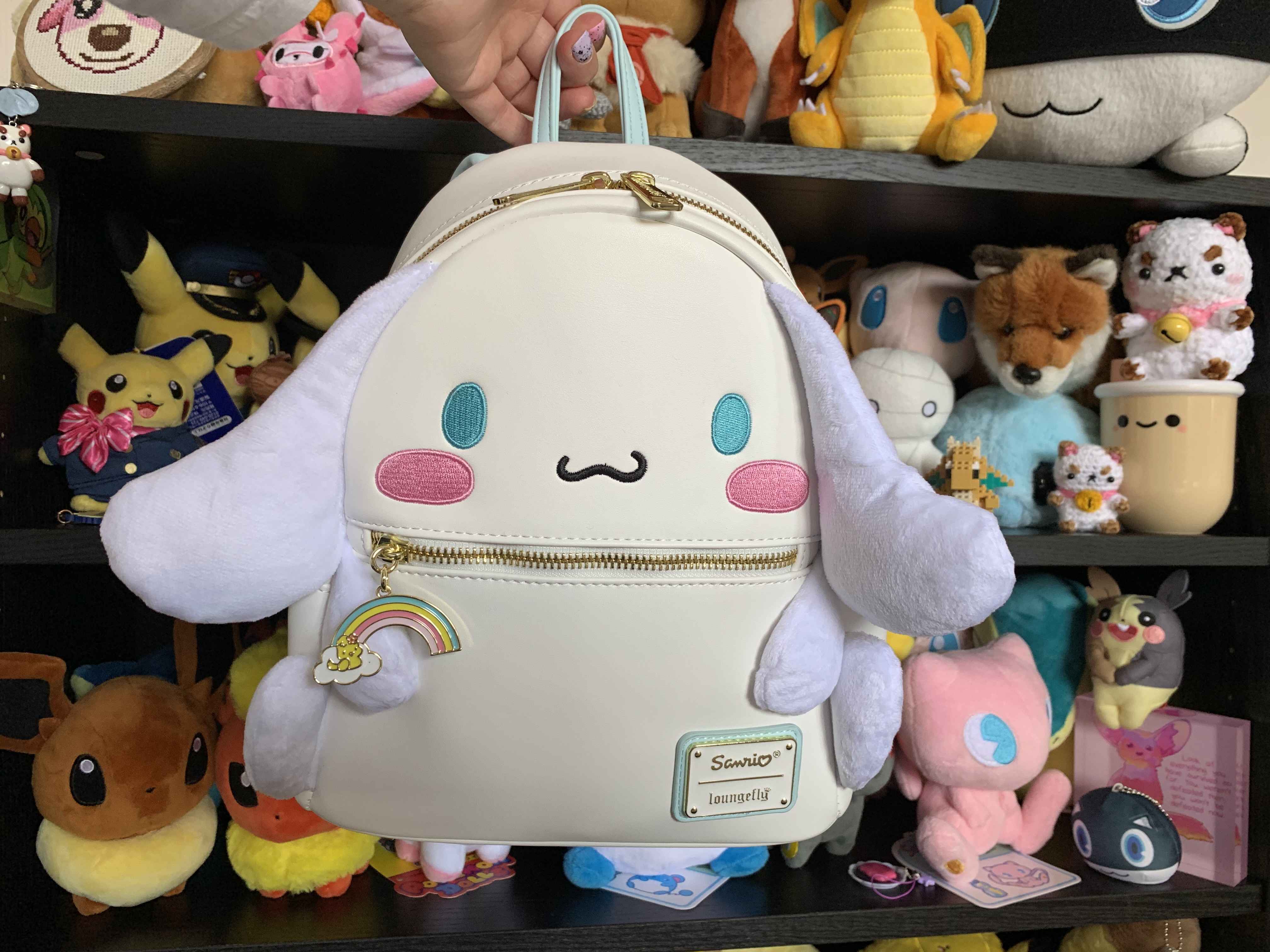 Just before Easter I found my Cinnamoroll backpack on Pop Figures, where I also had a discount code for 15% off, so I gave it a go and with the discount the bag came to £54.99! I ordered it, not thinking I’d snag it any cheaper.

Good Friday, I found out the website I bought the backpack from had a 20% discount, so instead of the £54.99, it was now down to £45.99! Dane didn’t realise I’d picked up the backpack the day prior, but he decided to order the bag at the cheaper price for me, as he knew how much I wanted it! I was out with my dad shopping at the time for Easter and had been messaged on Instagram by a lot of people to inform me of the cheaper price! I emailed the store to cancel my order and let Dane know that I’d had to cancel my order from the previous day. 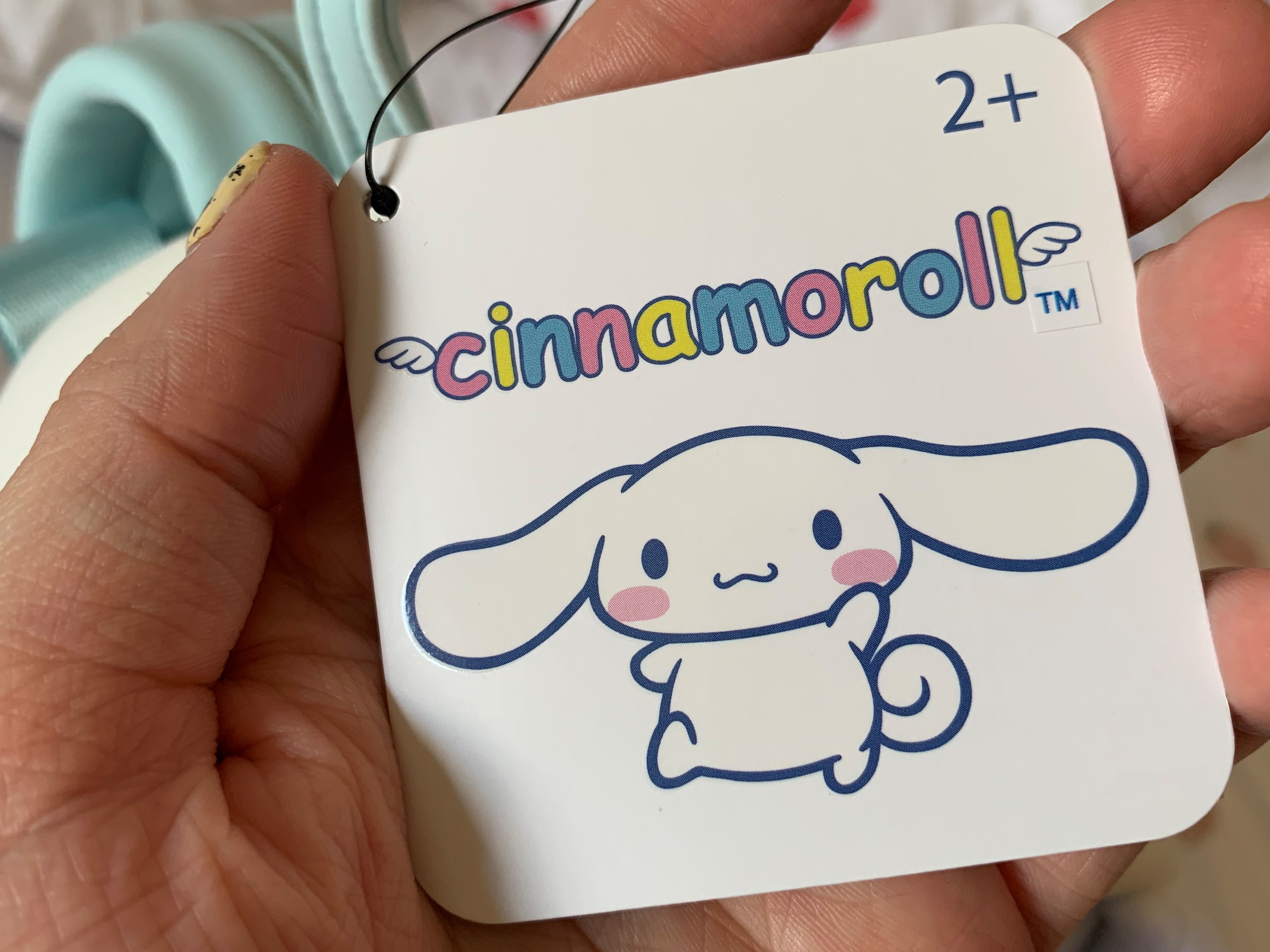 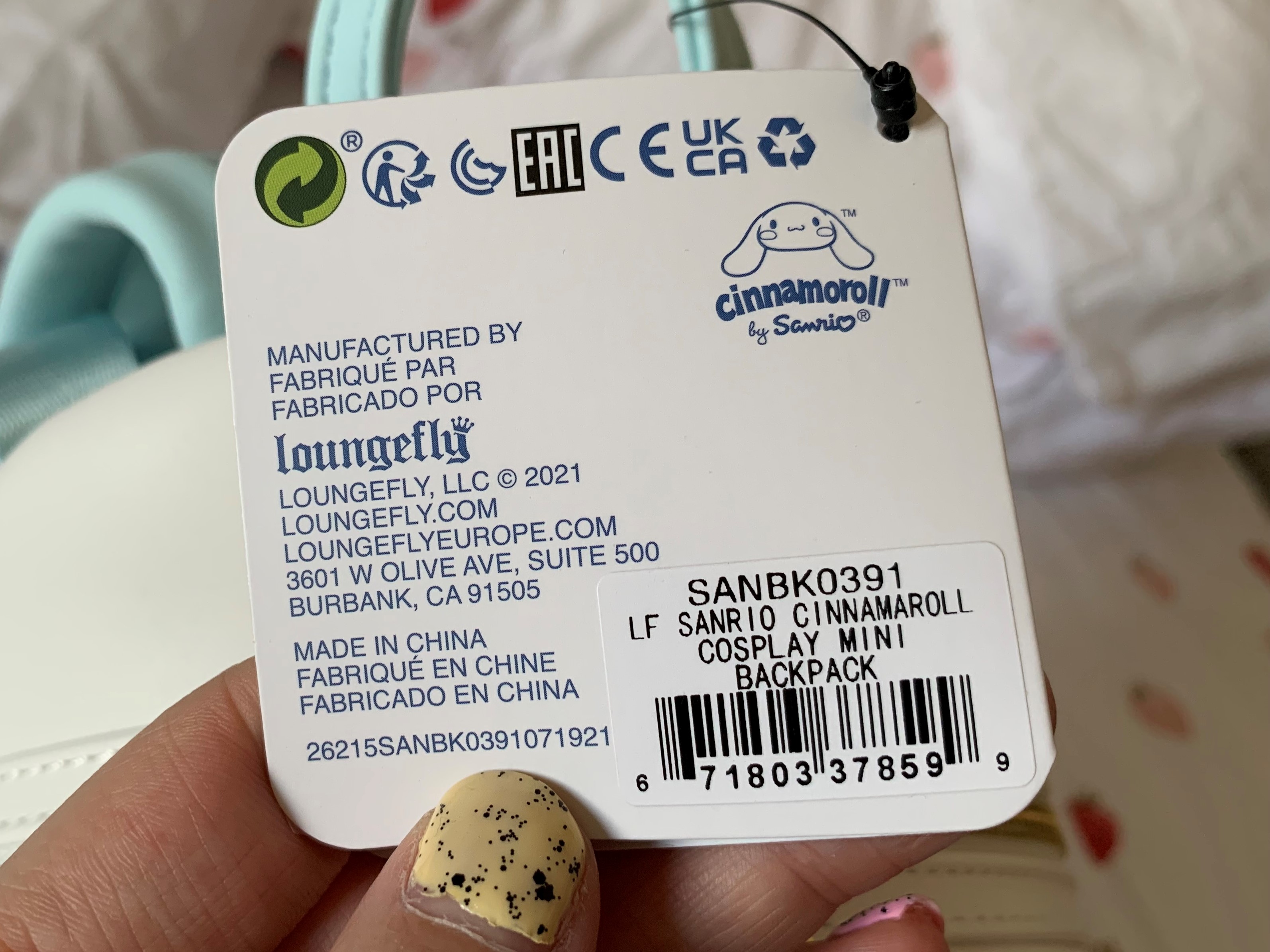 Just to add here, this wasn’t a gift from Dane, I gave him the money for it in the end. 🙂

The following days after Easter bank holiday my new backpacks arrived! No, that wasn’t a typo, I wrote backpacks on purpose. Unfortunately the store hadn’t cancelled my order quickly enough and due to that the order was processed regardless and sent out to me. This being said I sent it back with my postman and was left to enjoy my new backpack! 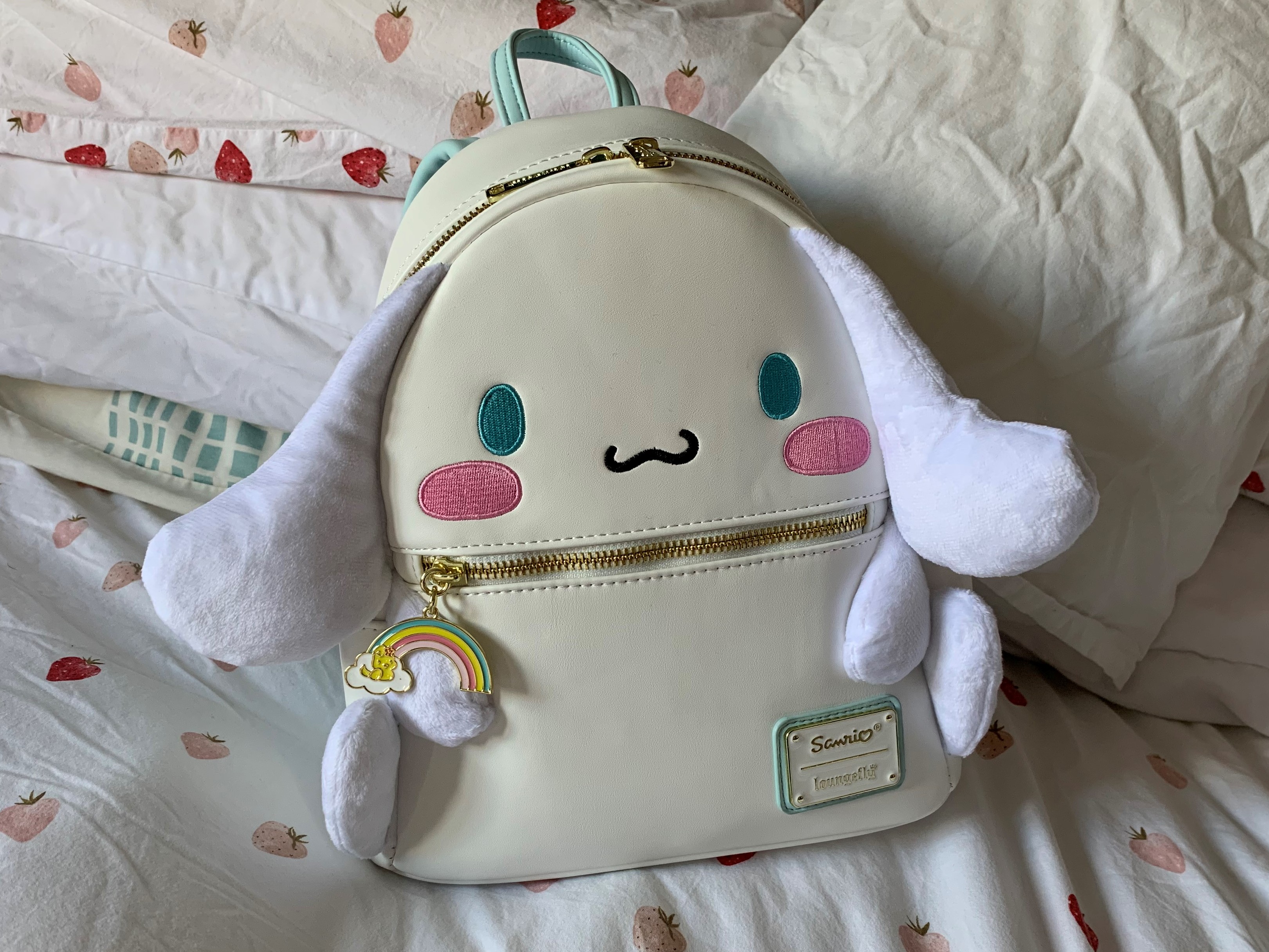 First things first, it’s bloody cute, too cute in fact. The first thing I thought when I took it out of the packaging was, “This looks too nice to wear… Have I done the wrong thing?” About three weeks have passed now since I bought this bag and nope, I did not do the wrong thing.

I’m so happy to finally own this backpack and since it arriving, I’ve used it everyday I’ve been out and about, especially at work and there’s zero sign of wear on it, which is always good. 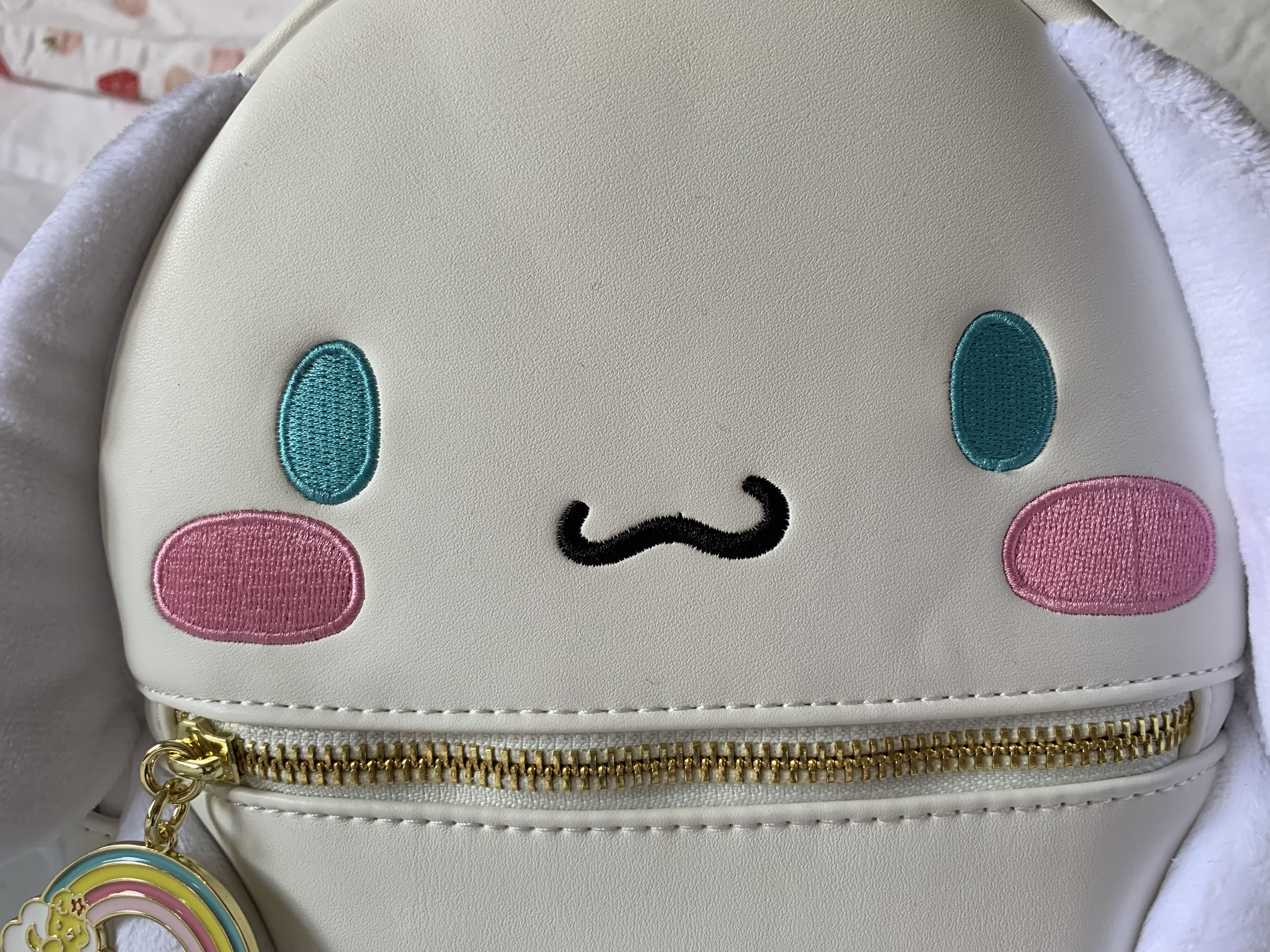 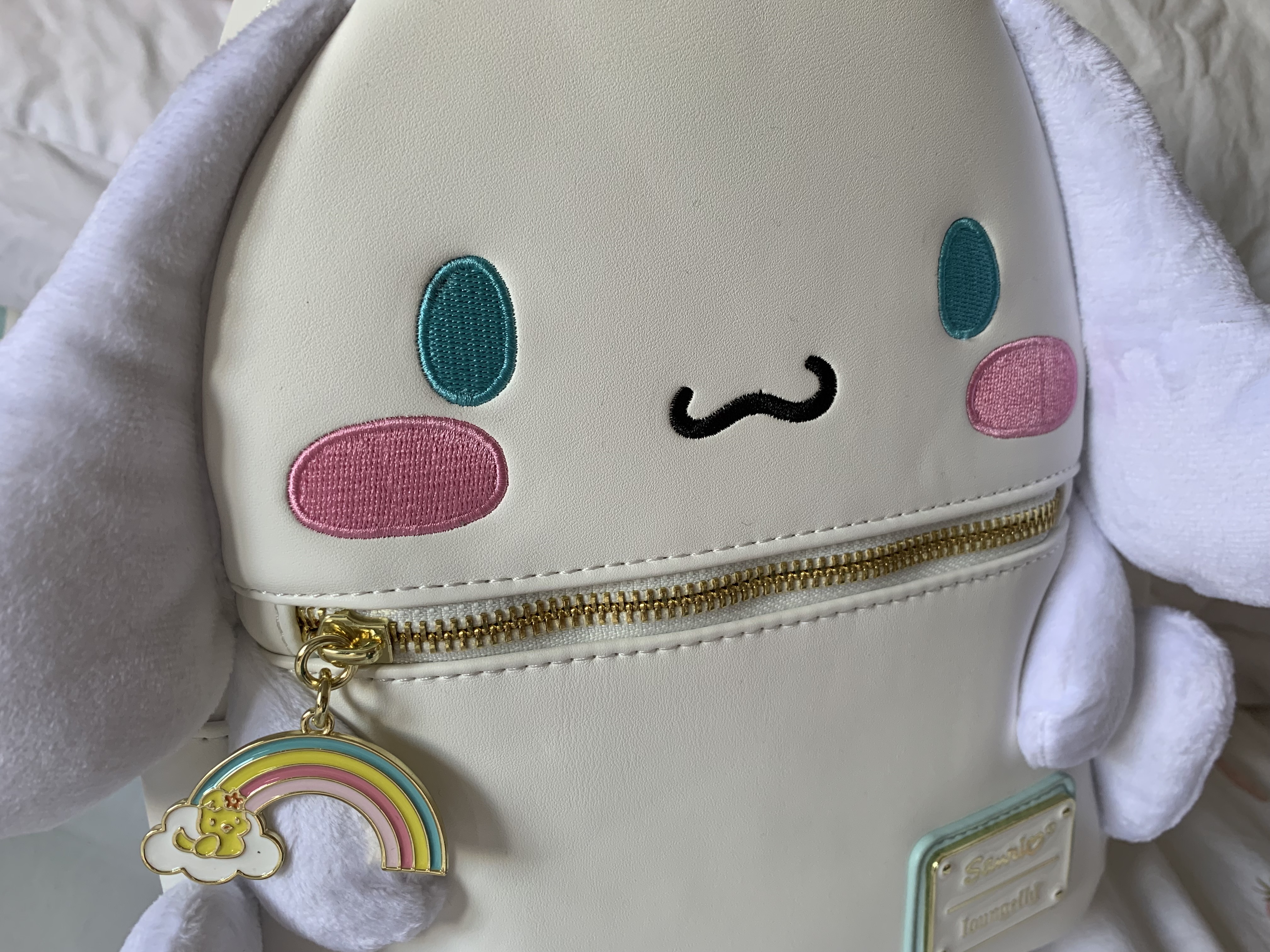 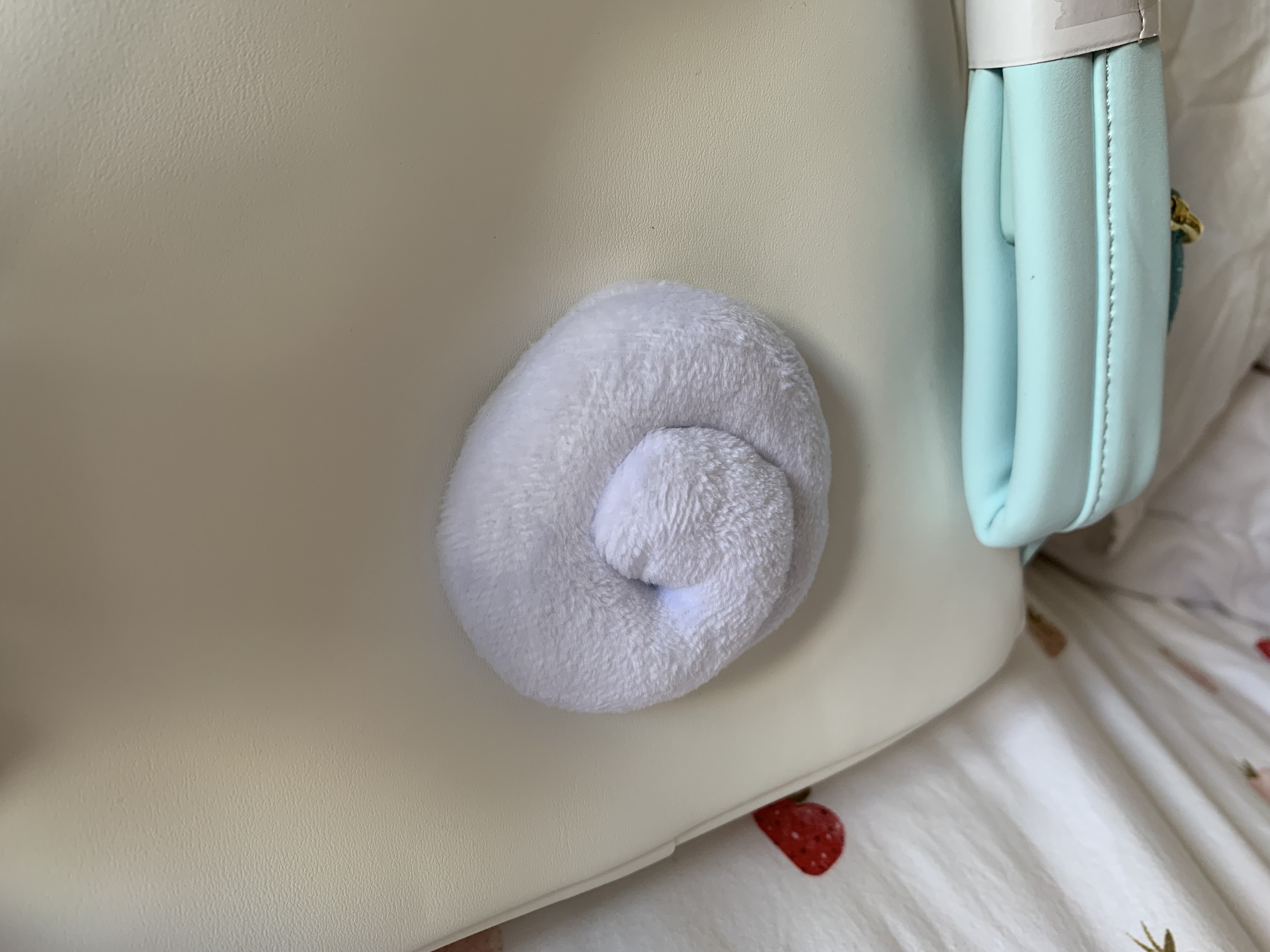 To comment on a few things with this backpack, as you can see it has Cinnamoroll’s adorable little face, with blue eyes, pink cheeks and black :3 smile! Alongside that we also have Cinnamoroll’s plush and soft ears, paws, and even his curly cinnamon roll tail at the back! When I first saw this bag I did wonder if the tail at the back of the bag would rub on my back and more, but alas I haven’t faced any issues which is good. 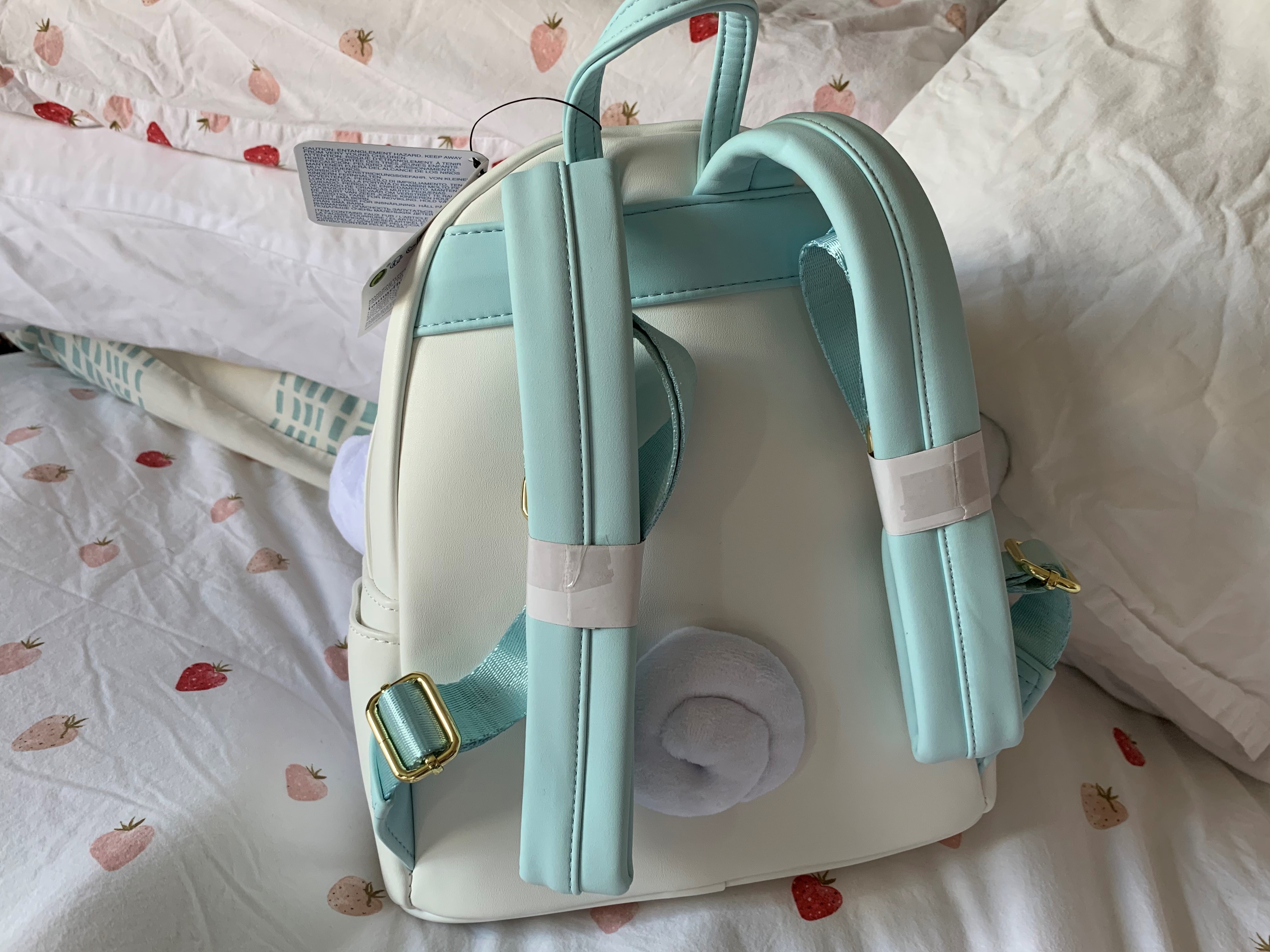 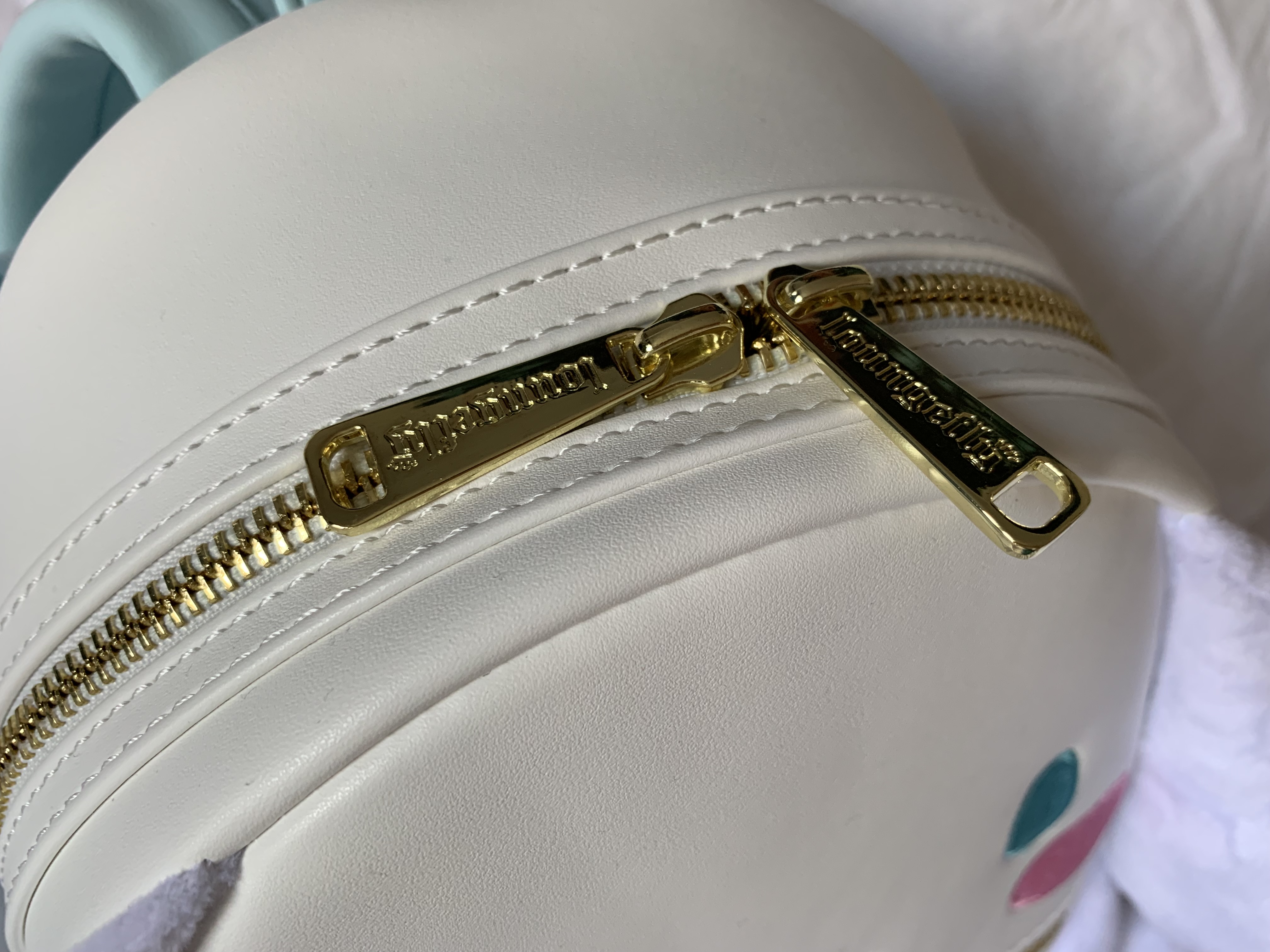 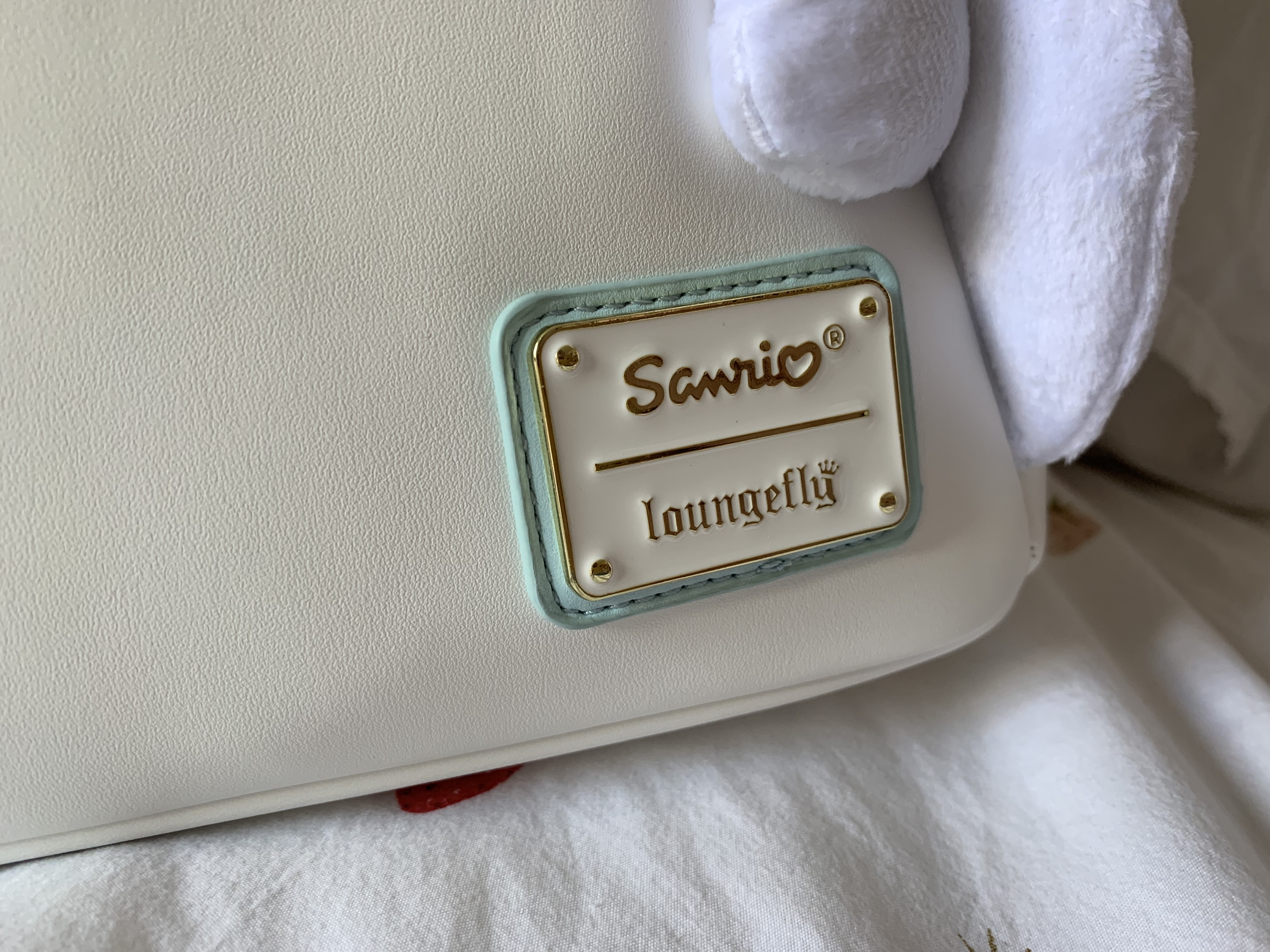 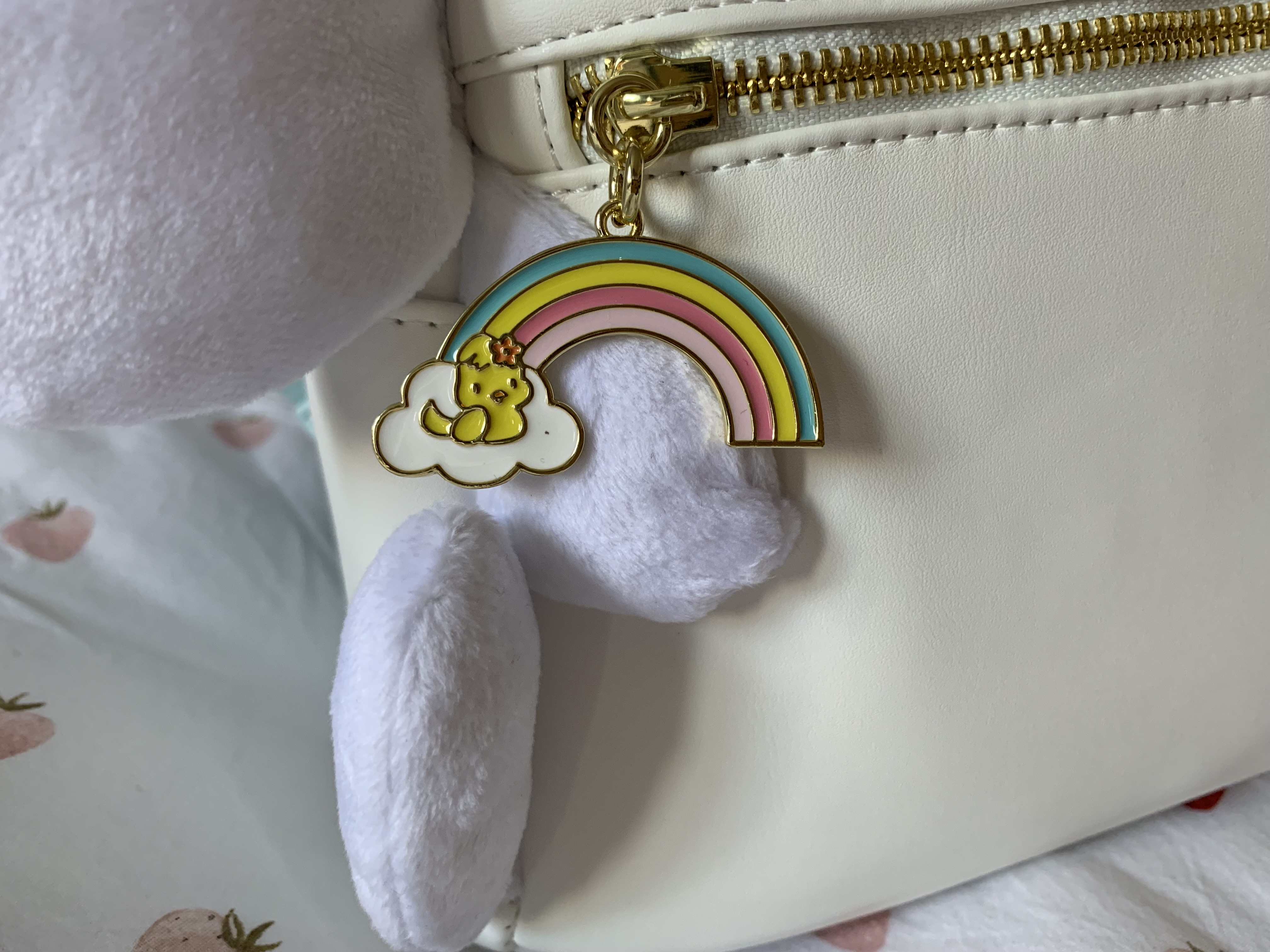 Alongside the obvious Cinnamoroll character features on the bag, we also have light blue straps, which is a the colour associated with Cinnamoroll, alongside the white. The metal detailing on the bag is all gold, with the front pocket of the bag sporting both the Loungefly emblem, as well as a zip being a rainbow with a little bird on it. Such a cute little addition to the front of the bag! 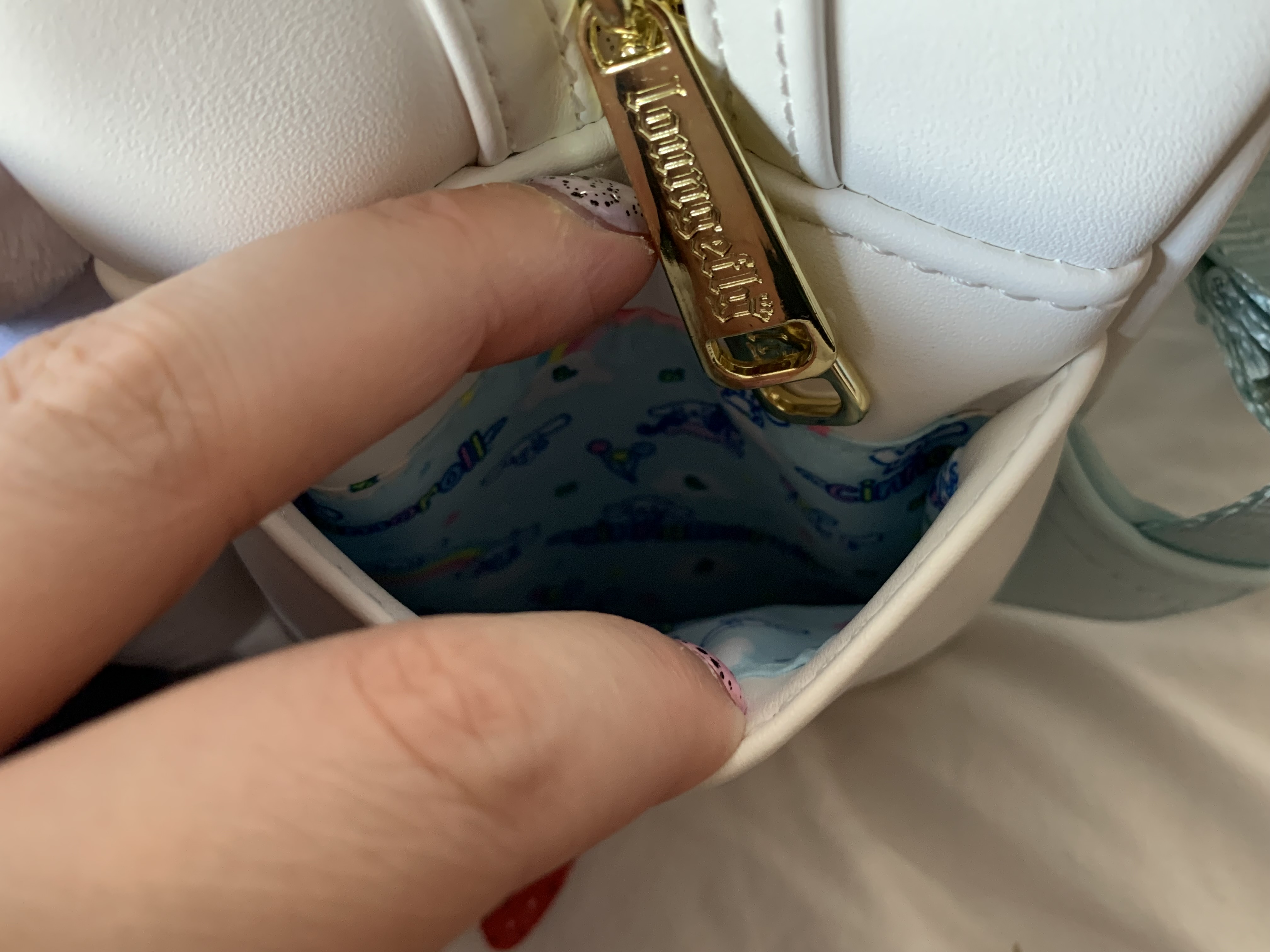 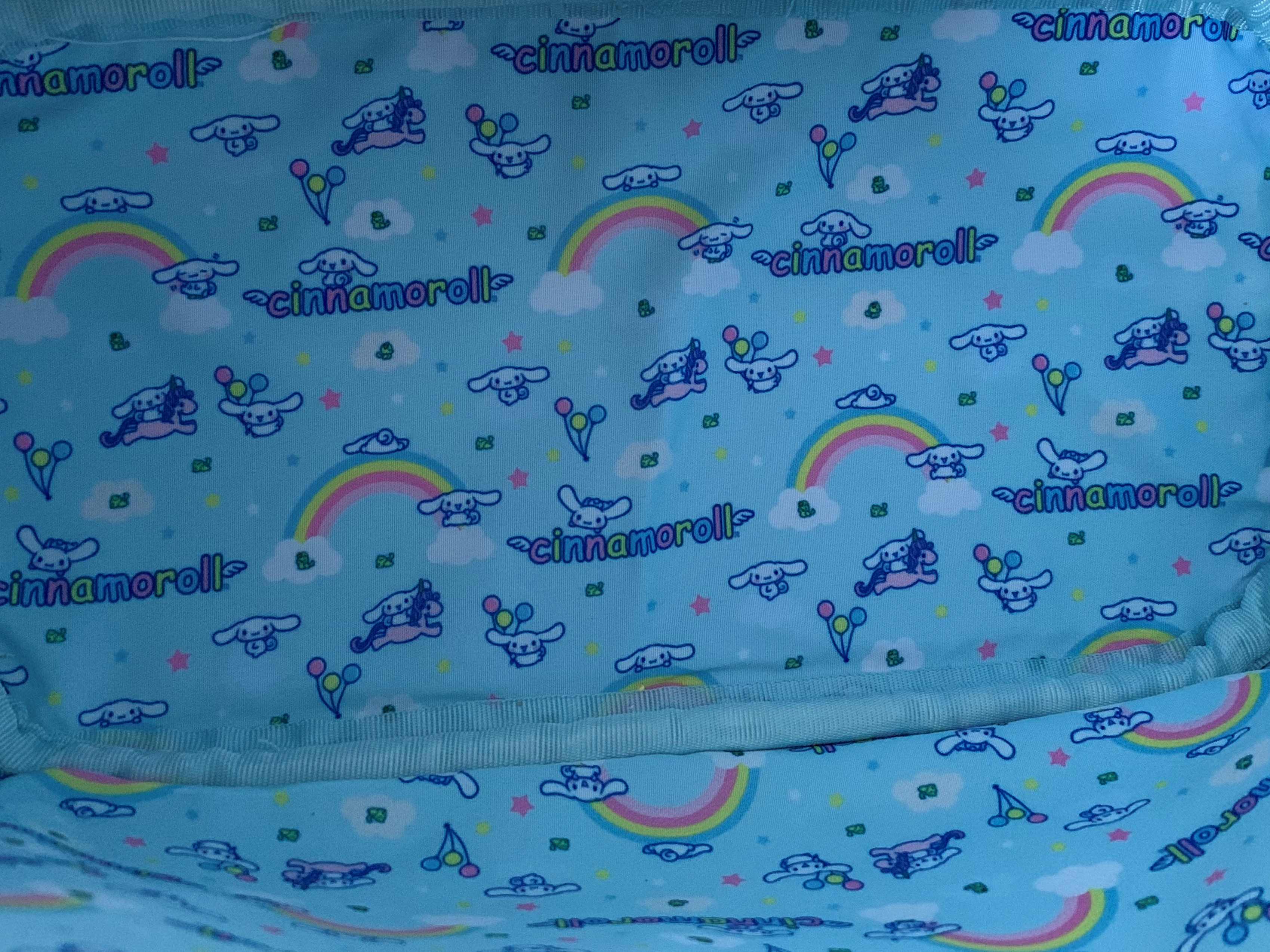 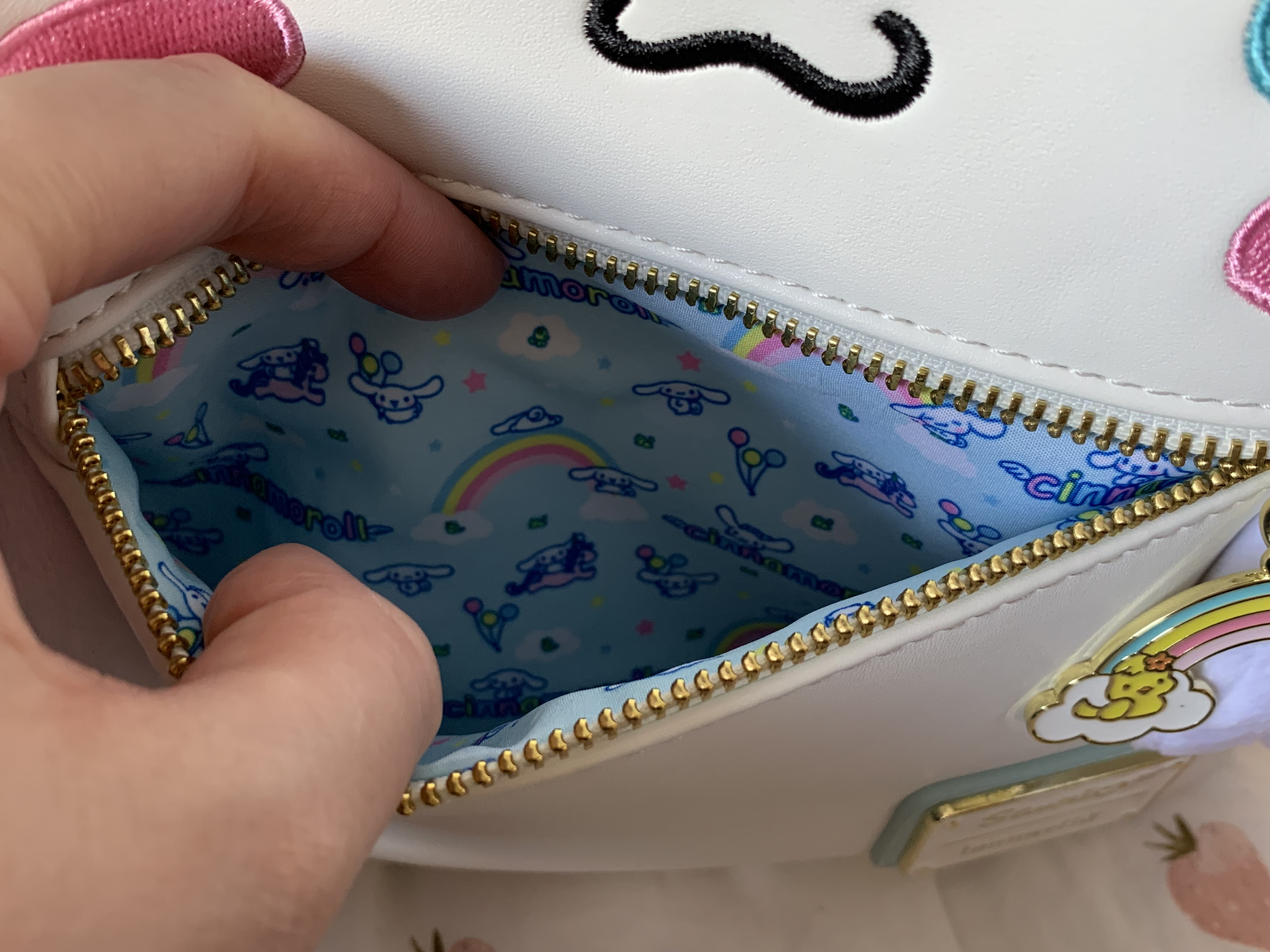 There are some little pockets on the side of the bag, a feature on most Loungefly backpacks! I used to use the side pockets often to house lip balm and such, but not so much anymore to be honest. Finally the lining inside the bag is gorgeous! It’s a similar light blue to the straps on the bag, with the Cinnamoroll logo, as well as little pictures of Cinnamoroll himself floating through the sky. It’s so adorable and makes me smile to see when going into my bag for things.

One complaint I have about the bag is that it doesn’t seem to be symmetrical? This is a complaint I’m seeing a lot lately on Loungefly groups, so I’m glad it isn’t just me! I feel like one side of the bag where the ears and paws are doesn’t match the other? This being said it doesn’t bother me too much, but if I’d paid full price for this, it definitely would have! Another thing to note, when I first took it out of the bag when it arrived, I noticed the bag itself isn’t white and is actually a cream or off white colour? I only noticed this due to the ears being white. I’ve gotten used to the colour the longer I’ve owned it, but it made me worry something was wrong with the backpack upon arrival.

Overall the backpack itself is really good, standard Loungefly backpack really to be honest with you! The space inside it is standard, not to small but not too big, which is how I like my backpacks. There’s also a little side pocket within the backpack, which I don’t often use, but handy nonetheless. I’ve found the front pouch is a little tight so I can’t fit too much in there, but that isn’t a bad thing. I never like to overfill my backpacks… Let me put it this way, I’d be Mary Poppins if I could!

Do I think this backpack is worth the RRP of £75? No, but this is for any Loungefly backpack these days. However the £45 I paid I feel it was definitely worth it. I say this as I don’t feel any bag is really worth £75 unless it’s a really special one for sports (e.g. snowboarding) or or a designer handbag maybe?

That being said, I really love my new Loungefly backpack and if anything it’s really cheered me up when wearing it out and about. It’s adorable, a conversation starter and Cinnamoroll!

There is a matching purse/wallet for this backpack, but as I already own a Sanrio wallet I love already, I didn’t feel the need to pick up the Cinnamoroll one. If I ever saw it new or barley used at a steal, I’d probably pick it up… Because why not?

What do you think of my new Loungefly backpack? Do you love Cinnamoroll too? If not, who is your favourite Sanrio character? Make sure to let me know in the comments!