Happy Halloween guys! It’s tomorrow, one of my favourite times of year, and unfortunately, I’m not here for it. I bought decorations and never put them up, and I had a pumpkin to carve (thanks to my dad and his pumpkin patch!) but due to have a cold/flu this week, I haven’t even felt up to doing it. I’m gutted. Halloween this year has been a major flop for me for many reasons, which is a shame.

It’s not all doom and gloom in the run up to November though, as me and Dane are now on holiday from work for a week! We’ve been in need of some long time off of work so we’re both looking forward to it.

October really flew by and I can’t believe it’s November in just a few days. I love this time of year due to Halloween and Bonfire Night, but the weather is vile, which is such a shame. I hope during our week off the weather holds off a little, I don’t want to just have a wet week off work. 😦

I’m not going to waffle on anymore, let’s get on with the favourites! 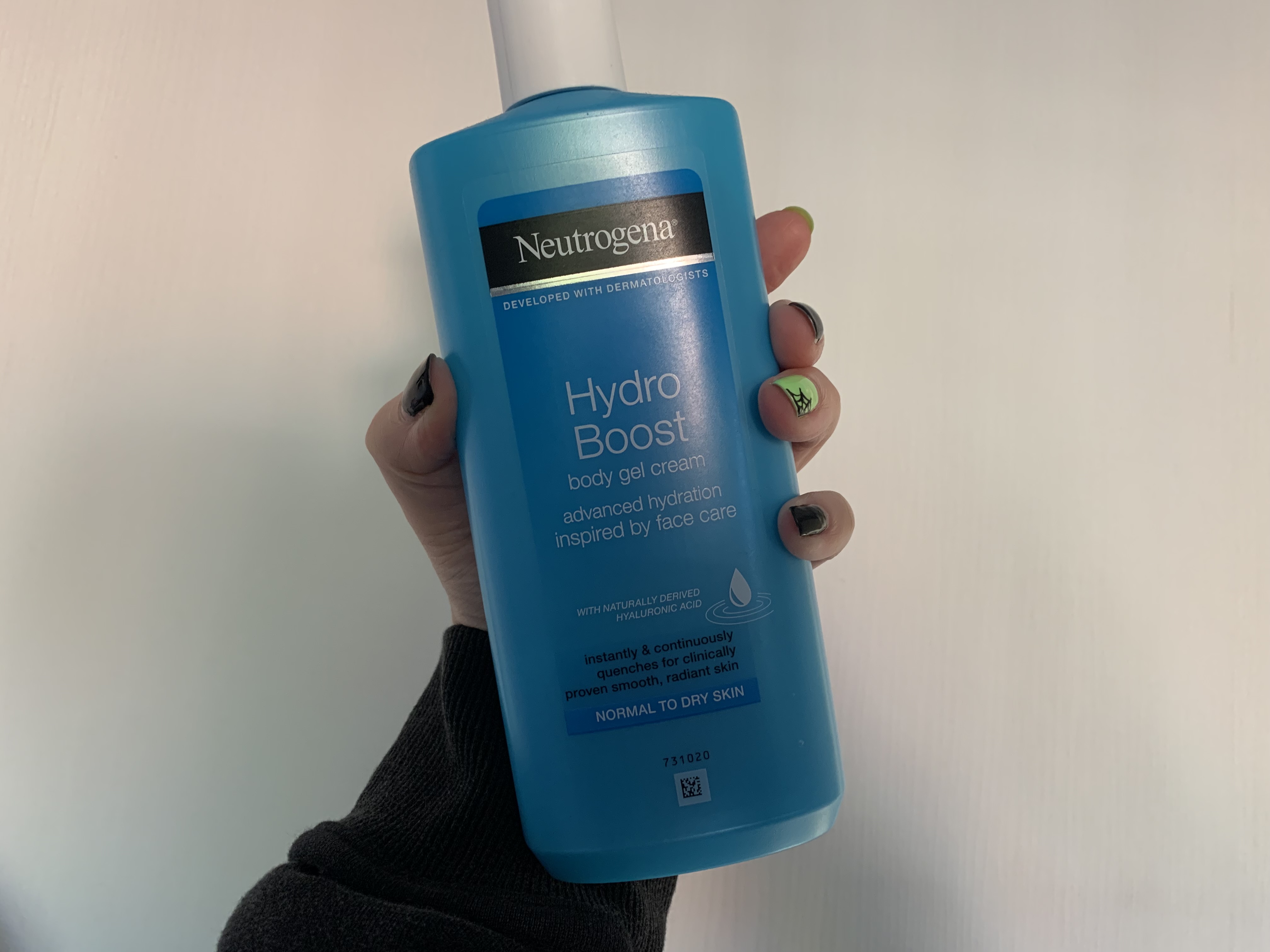 This is a body cream I’ve been using for quite a while now, couple of months now maybe? Unfortunately I recently discovered that I’m allergic to The Body Shop’s strawberry body yogurt on my legs, so I’ve had to discontinue using that there, and instead I’ve been using the Neutrogena gel cream. I don’t just use this on my legs, sometimes I will use all over as it’s such a quick and easy body gel cream to use! It absorbs quickly, feels light and cooling and smells lovely and fresh too! This is one where a little bit goes a long way too, and I already know I’ll be repurchasing this, especially when it costs less than £5! I also have the spray version too, which I don’t use too often… I need to use it more!

Movie – Various horror including Rec and House of 1000 Corpses.

The past week we’ve spent many evenings watching horror movies through Shudder, a movie subscription service dedicated to horror! We have a seven day free trial and so far we’ve watched quite a few films on there, but the two that stand out to me are Rec and House of 1000 Corpses, the latter being a movie my boyfriend has wanted me to watch since we got together! Rec is always a film I’d heard of due to the remake, but I never actually knew what it was about. Alas I was surprised as I watched it and I thoroughly enjoyed! If you’ve never seen it, you should watch it too, not the remake, the original!

My boyfriend did pre-warn me about House of 1000 Corpses about how “amateur” it is due to it being done by Rob Zombie, who at the time was more known as a musician than director. This was the first film he directed and you can kind of tell, but that’s what is so charming about the film itself! The film is about a group of teenagers who are kidnapped by a family during Halloween. My favourite character (one I’m sure the film is best known for) is Captain Spaulding. He’s fucking hilarious and I can’t get enough of some of the stuff he says, hence the clip above.

I haven’t read the manga, but I was so hyped about the anime for Chainsaw Man releasing a couple of weeks ago! I’ve always heard amazing things about the manga series from my friend Sammie, as well as from members of the Worlds Apart Discord community. We’re on three episodes so far and it’s constantly giving you action and things to get you to the edge of your seat. We follow Denji, a teenage human boy, who is orphaned, and has to hunts devils in order to pay off his families debt. With his pet devil Pochita by his side, he can do what he needs to. However, something bad happens, which changes Denji’s life. I won’t say anymore as I don’t wish to spoil but… I’m loving this series so far and I already can’t wait for the next episode on Tuesday. 😛

Recently PVRIS released two new songs in the form of a short film, where both songs were featured. I really love both of these songs, more so “Anywhere But Here” as I love the lyrics and melody style vibe and sound behind it. I do really like “Animal” as well as it feels the complete opposite to “Anywhere But Here” with harder guitar riffs and more, with the lyrics being a little more edgy too and with a rebel attitude? I remember seeing around the end of October that PVRIS had something new to reveal to fans, so I was excited it would at least be a new song, but the fact we got treated to two?! I can’t remember if I mentioned on my blog previously, but at the start of August I finally bit the bullet and booked to see PVRIS live, and I’m so bloody excited for it! Since I discovered PVRIS in 2019 I’ve been dying to go and see them live. 🙂

This is a game one of our friends was talking about, which intrigued me. I watched the trailer above and I just knew I had to give it a go! As it’s a game Dane already owned, we opted to play it on the split screen play together with said friend and since then I’ve been itching to play it! This was only yesterday by the way. 😛 So, PlateUp! is about running a restaurant, including cooking in the kitchen, serving the customers, as well as cleaning after them. Pretty much Overcooked, BUT it isn’t as stressful, which is always nice. One thing I especially liked about this game is the fact it’s couch co-op, so you don’t need two copies for you and a someone else to play! It’s up to four players, so maybe even four of you could play at the same time! 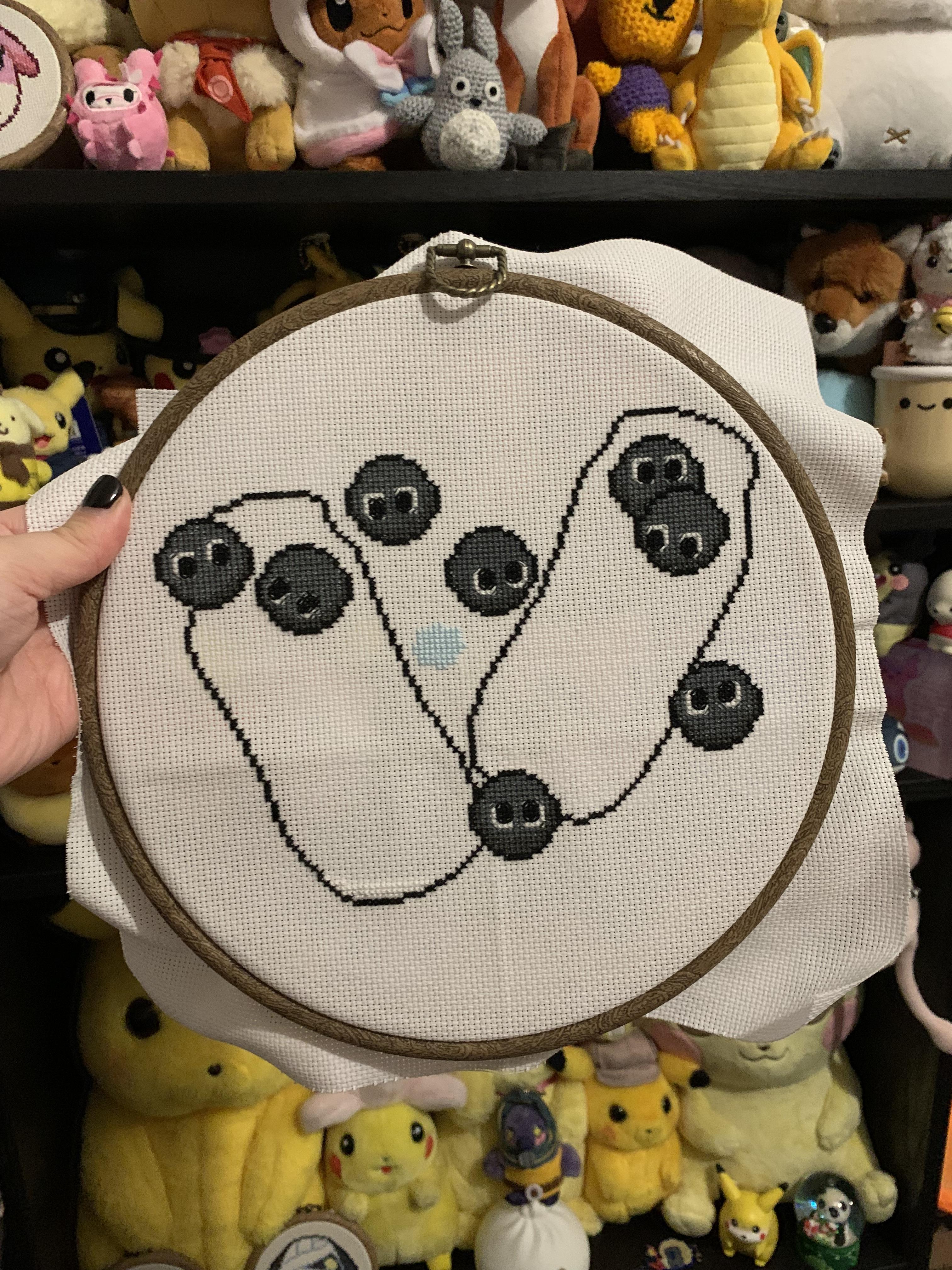 At the start of October I started a new cross stitch project and it’s one I was so anxious about at first, so much so I left it untouched for about a week? Since then I’ve been picking it up every other night and a couple of weeks later it’s looking as it does above. If you can’t tell, this is a Studio Ghibli inspired piece from Spirited Away. It’s Chihiro’s little yellow shoes, surrounded by soot sprites. As we don’t like shoes on in the house, I decided to cross stitch this design for our home to hang up! I’m planning to have it completed before the new Pokemon games come out mid November. The design/pattern is by the same person who I bought my Eevee design/pattern off, which I’ll link here. 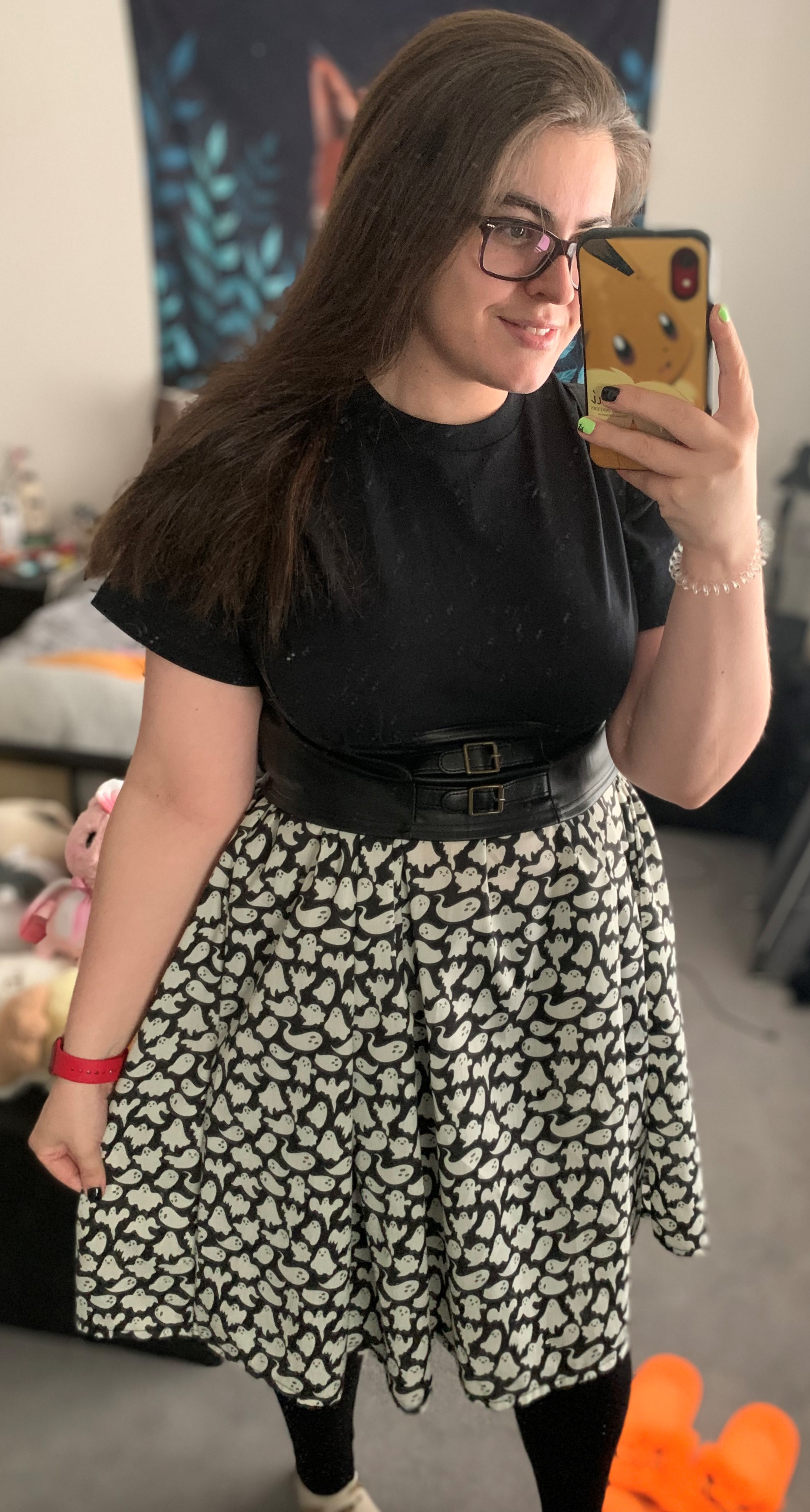 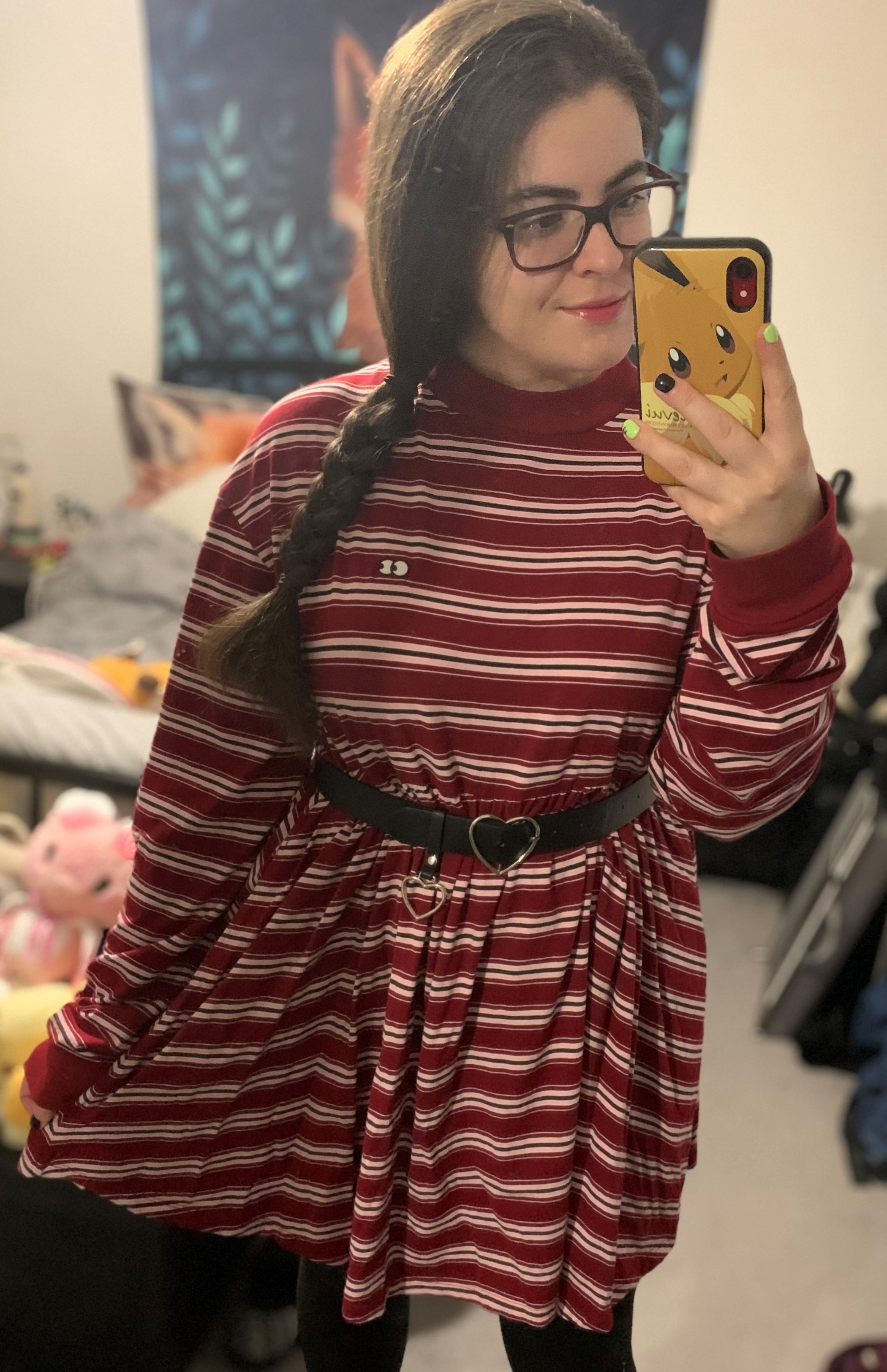 If there’s one style of dress I’m mad about right now, it’s smock dresses. I can’t get enough of them, honestly! I received a couple recently, one being a pre-order, the other being a bargain find on eBay! I’ll talk about them in the order shown about.

The ghost smock dress is by Lazy Girl Club, which I mentioned recently on my October wish list here. I pre-ordered this dress over a month ago and a few weeks ago, it arrived! I love ghosts, so I knew I couldn’t resist this dress for Halloween, as well as all year around! The only issue I have with it though is it’s far too big for me, which people have commented on. If I don’t wear a harness or belt around the middle, I look like I’m trying to hide a pregnancy, which personally isn’t a look I want. Due to this I’m looking for a harness I can wear with this a lot of the time. I do have a Black Milk Clothing corset style harness that I’m wearing in the above photo, which works so well with it! I’ll probably try and wear this at work one day and see how I get on! If you’d like to get one of your own ghost smock dresses by Lazy Girl Club, or any other of her pieces for that matter, get over to her store ASAP as she’s just reopened it for orders!

The eBay bargain I found is this Lazy Oaf sally dress! I’ve seen this dress pop up on eBay and Vinted on and off, but when someone popped one on eBay for under £40, I couldn’t resist! It was brand new with tags and a complete bargain. I couldn’t wait for it to arrive so I could wear it to work and more. I’ve worn it a few times and it’s definitely too big for me, but it’s fine with a belt around the middle! It’s very cosy and perfect for colder days with a cardigan layered over the top of it. When I wore it to work I got a lot of compliments, which was really nice! 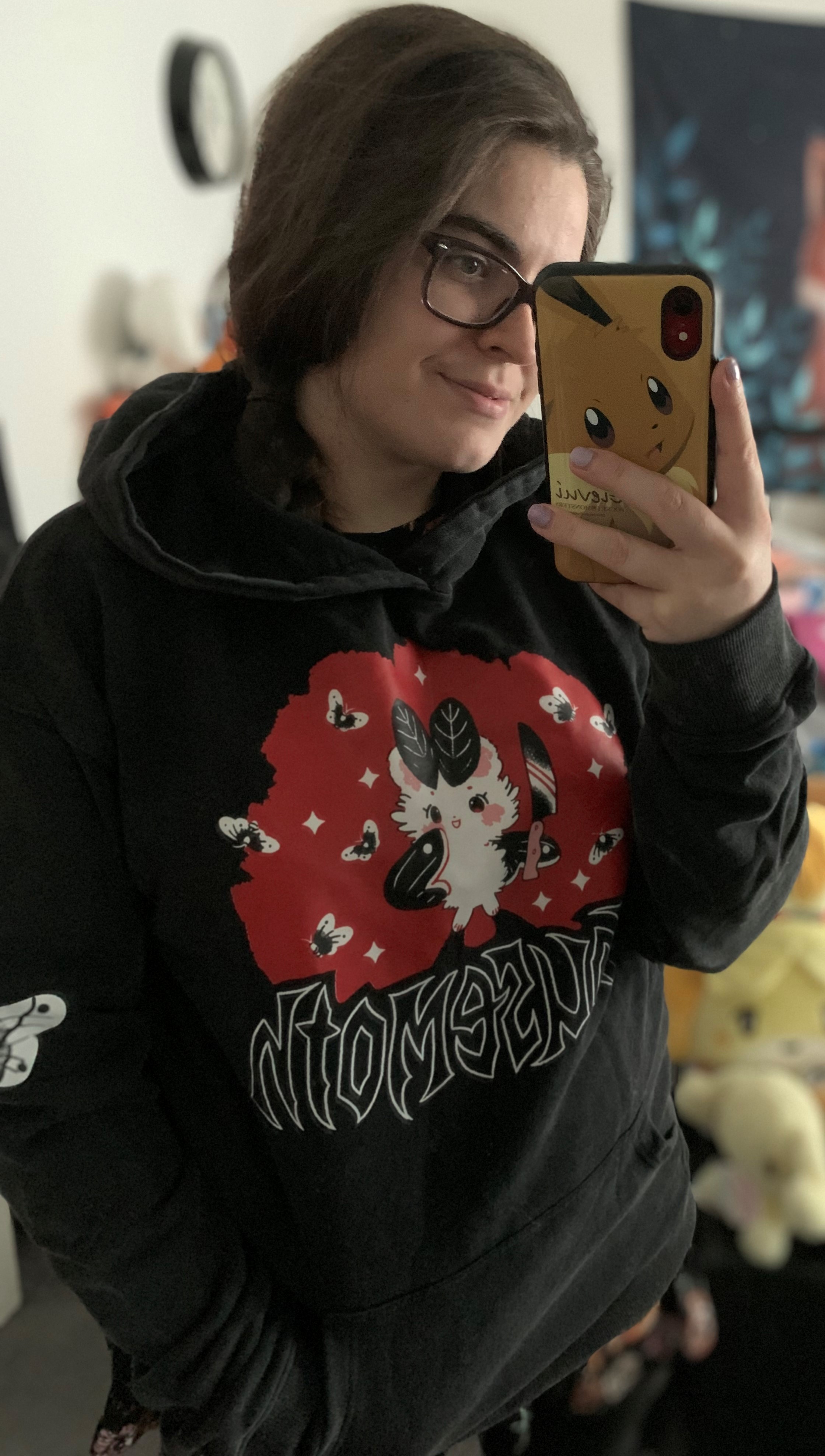 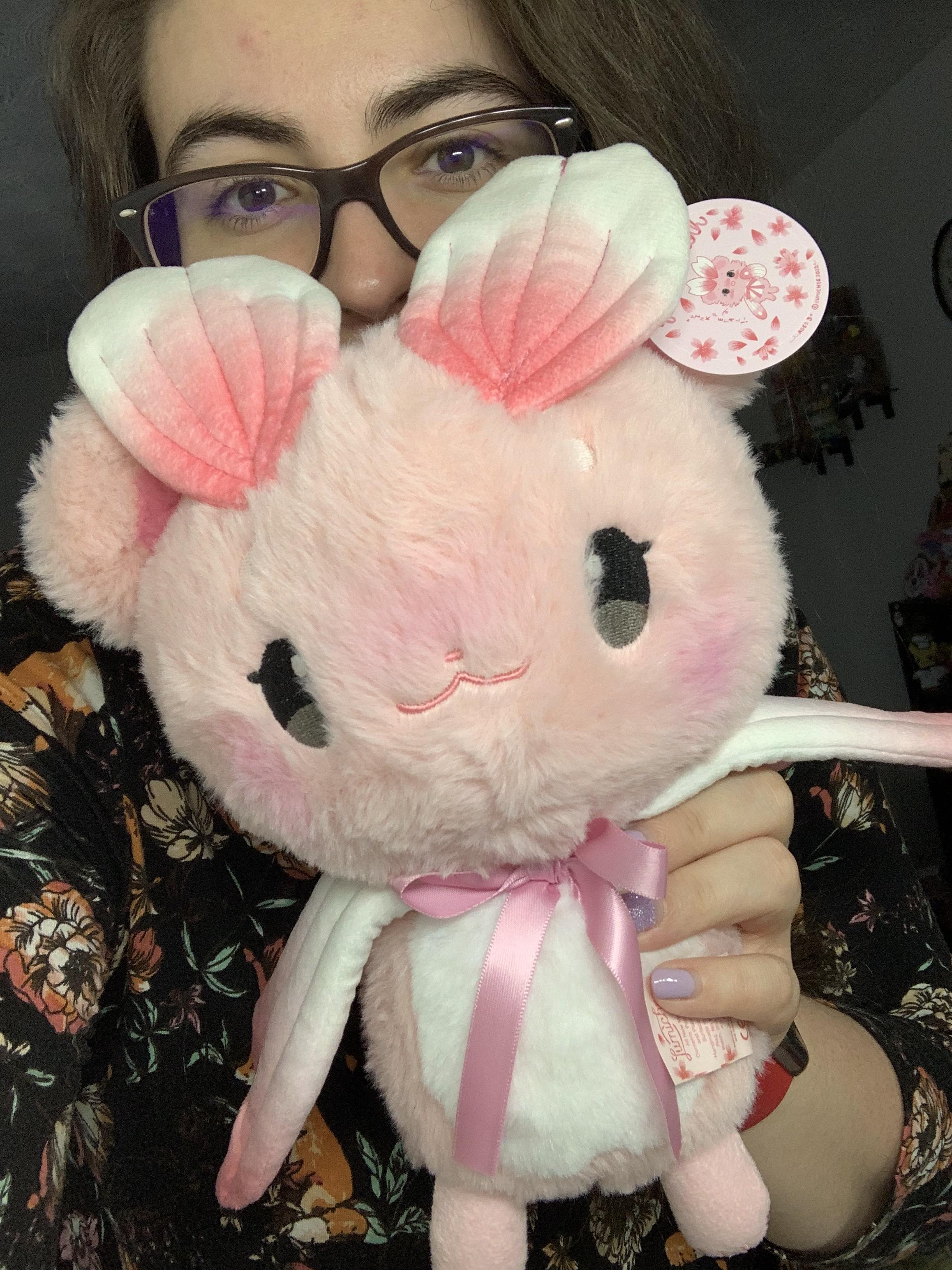 Finally, my long awaited Lumichee goodies arrived that I ordered! I can’t remember if I mentioned on my blog, but I placed this order through a courier service as the costs I would have paid through Etsy were a joke! I have no regrets and since the hoodie arrived, I’ve pretty much lived in it. 😛 I went for the mousemoth hoodie, as well as a sakura inspired mousemoth plush. I’m already chomping at the bit to place a second order, but I must be good due to Christmas looming! I don’t want to talk too much about these as I plan to write a blog post about these at some point in November. 🙂

So, there we have it, my favourites for October! Did you find October flew by really quickly?

What were your favourites from October? Anything I’ve mentioned that you’re planning to check out? Also, what plans do you have for Halloween tomorrow and Bonfire Night next week? Make sure to let me know in the comments!

Until next time, take care all and have an amazing (and safe) Halloween and Bonfire Night next week!