We are into the first week of August and already it’s been really busy and exciting for me!

During the end of July I seemed to get a bit spend happy which I really didn’t mean to do. You know when you just see a lot of items come up for sale or on offer and you just need to snag them? Yep, that’s been me. 😛

Due to this a lot of items on my wish list are probably more realistic to September, rather than August. 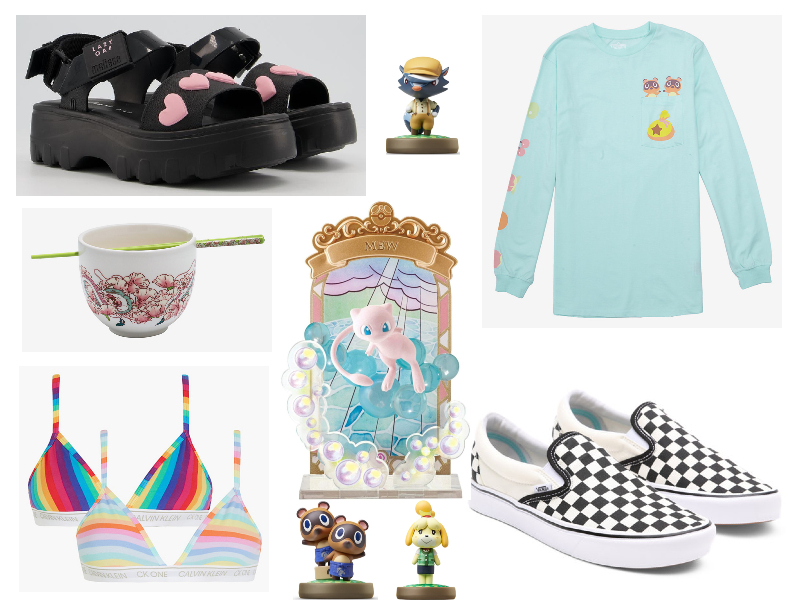 For a couple of years now I’ve really wanted to start collecting the Animal Crossing amiibo figures, but it’s only been towards the end of July that I’d found some at decent prices and ordered. I only have three (four if you include Smash Isabelle) left to get and it’s crazy how many I own already! I also have some dupes that I’m selling to a friend, so the monies I make from that can be saved to potentially go towards the three I’m missing! I have an Animal Crossing shelf near my bed, which has gone from empty to really full in a short amount of time! I’ll have to show it off in next months favourites. 🙂 I’m hoping to snag these amiibo from eBay/Depop or Cex in the future.

I’m not a massive re-ment fan… It just isn’t for me. I do own a few that I was gifted a while ago now and I do like them, but there are some really cute Mew ones coming out lately! This stained glass Mew re-ment is adorable and it’s something I would love to get to keep on my desk. The little Mew’s face is just adorable! I’m definitely contemplating picking it up in the future. Probably through From Japan. 😀

I have been lusting after this ramen bowl for what feels like forever now! As regular readers will know, I love Studio Ghibli, but I can’t remember if I’ve mentioned before just how much I love Haku. He’s my favourite Ghibli character so whenever I see him on merch, I usually love it with this ramen bowl being one of them. I love eating ramen and currently only have one ramen bowl (which you can read about here) I go to but would love another one. I was showing this design and more to Dane recently and he rather liked the designs. Maybe in the future I’ll pick up a couple. 🙂

I love Animal Crossing (as you all know… :P) and I love long sleeved t-shirts… So put them together and there’s something I can get behind and love! I really want this Cakeworthy t-shirt. I wanted it ages ago when it was being stocked in the UK by the price the store in question wanted was a fucking joke, so I left it. I’d be using a personal shopper I buy with in America to pick this up for me… Maybe the Haku bowl too. 😛

I am in desperate need of some new Vans slip on shoes! My Darth Vader ones from back in 2015/2016 are starting to rub now due to the age of them and I do need to get something fresh. For some time now I’ve had my eye on getting a pair of the checkered slip on shoes. One of my first pairs of Vans were the red and black checkered, which I adored! I still on them but they’re not comfy to wear anymore due to the age. Plus these are the comfycush shoe, which is said to feel like you’re walking on air! This being said, reviews say different. I’d look to try these on in store and see for myself.

I’ve fallen in love with Calvin Klein lingerie, especially their bralettes which I’ve found have been great for wearing whilst working from home, as well as for bed when it’s a warm evening. The Pride triangle bras look so pretty and I’d love to have them to wear whilst working from home too! They come in a two pack, which makes the cost of them overall really good.

Finally, another pair of shoes! I keep going on and off these sandals and I’m unsure if I’ll ever buy them due to that. I bought my first pair of Melissa shoes a couple of months back now (Vivienne Westwood flats) and I love them! However, I don’t own any sandals and every summer and holiday I go on I often just wear my vans everywhere due to that. I don’t really like sandals and showing off my feet, not so much abroad but definitely in the UK. Hence why I’m constantly swaying towards not buying these. They’re not cheap and I’ve heard mixed reviews about them rubbing, which isn’t something you want during the warmer weather. I think these will be shoes I’ll keep my eye on and if they go into the sale for a good price, I may snap them up!

There we have it guys, there’s my wish list for August! I know it’s nothing special, but I’m trying to be good with my money throughout the rest of the month.

What did you guys like the look of on my wish list, and what’s on yours? Make sure to let me know in the comments.

Until next time guys, take care and I’ll see you soon!