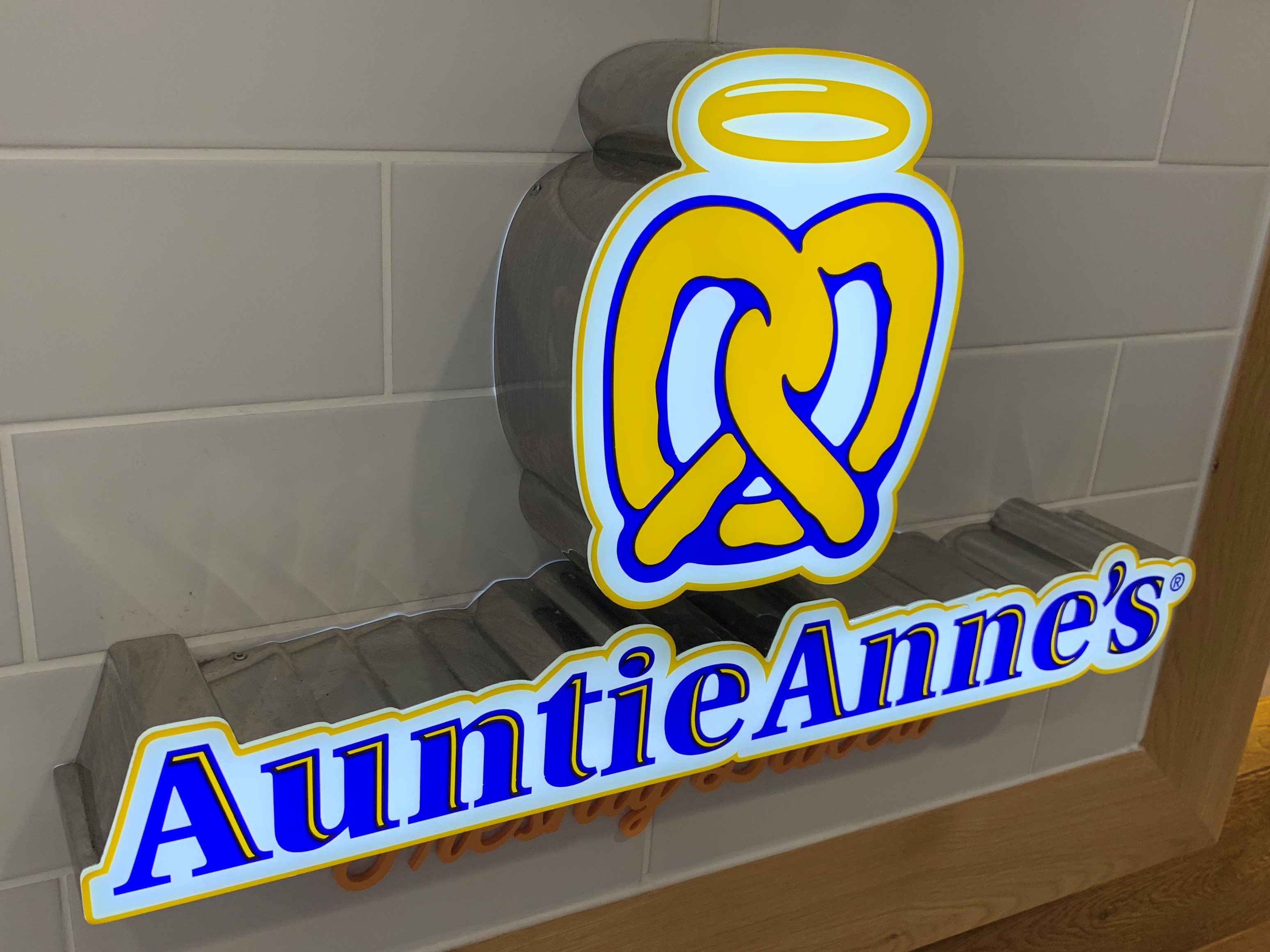 If there is one thing I really love it’s food and if there is another thing I love it’s making food. So when I was invited by Coventry Bloggers to attend the Auntie Anne’s pretzel party last month, I definitely couldn’t turn it down! 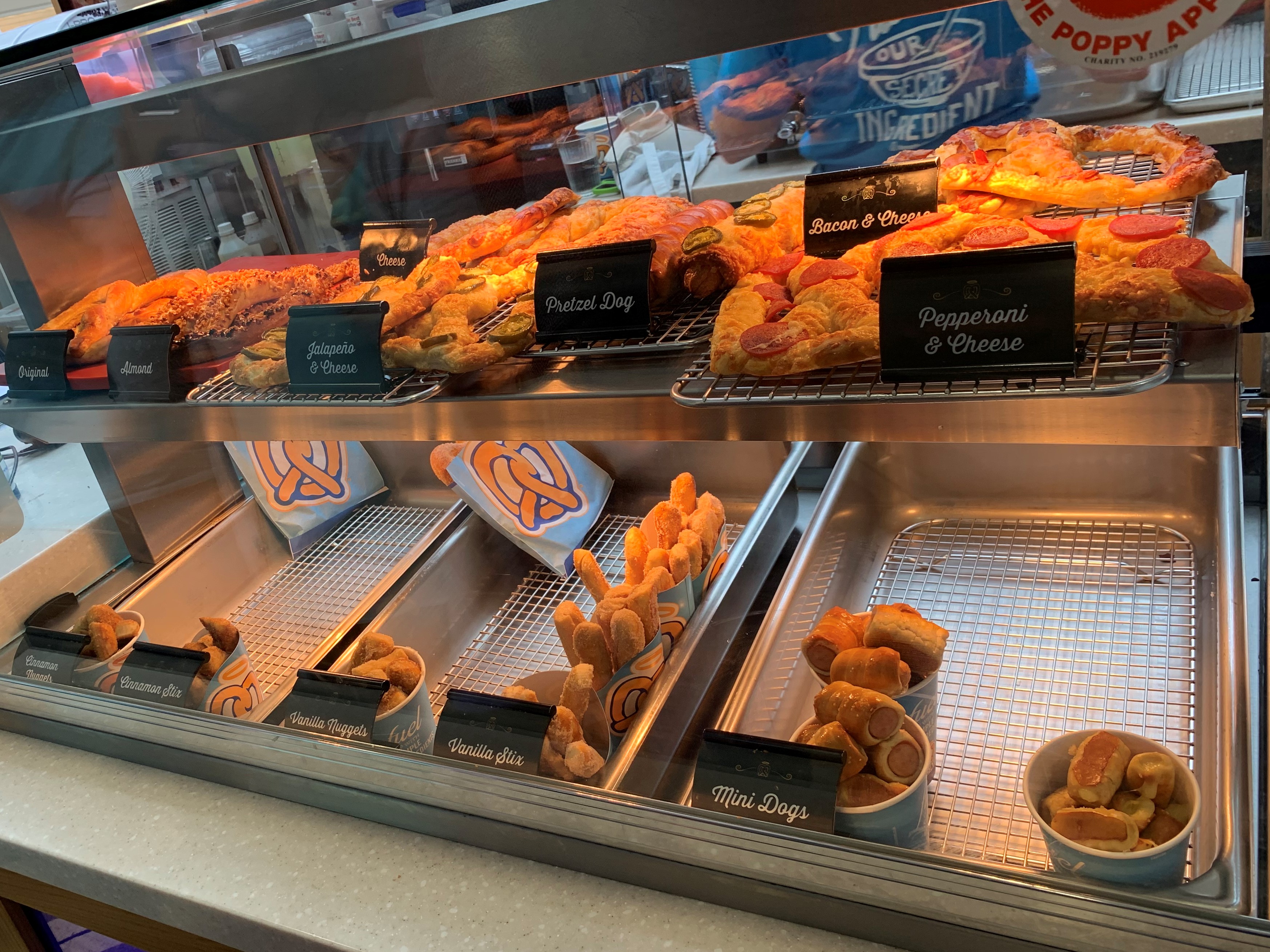 In Birmingham we don’t actually had an Auntie Anne’s, although we used to many years ago before Grand Central was finished and this amazing little pretzel place was taken away with the rest of The Pallasades shopping centre. So for me it’s very nostalgic to go into Auntie Anne’s whenever I visit Coventry, as well as a MASSIVE treat. 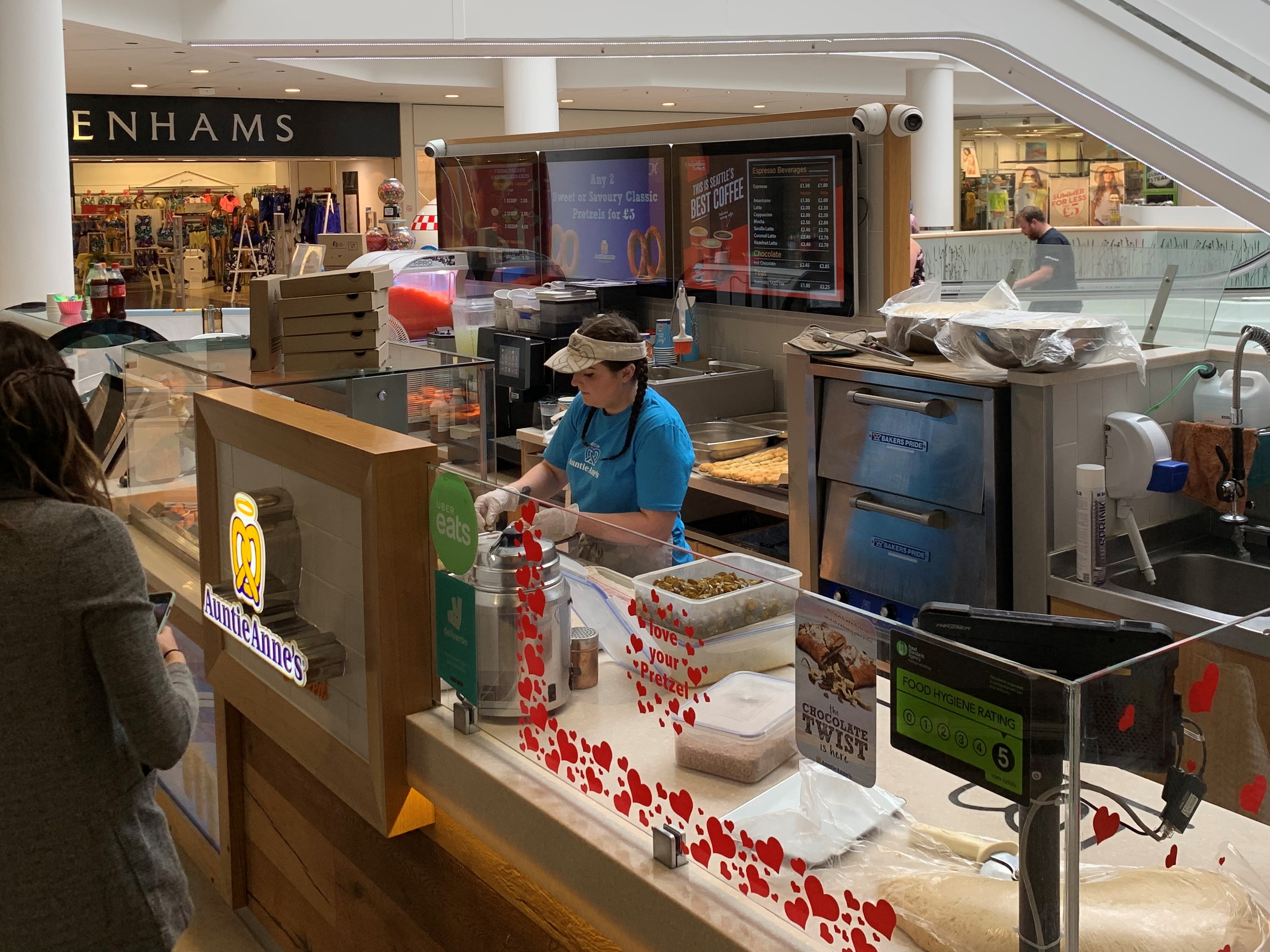 There are a couple of Auntie Anne’s stores in Coventry, one in the Ricoh Arena Park Shopping Centre as well as West Orchards Shopping Centre too, with the Pretzel Party being in the latter!

We were told we would get the chance to make our own pretzels and although I’ve made my own at home in the past, I didn’t quite know what to expect when it came to making pretzels with Auntie Anne’s!

I was so excited for the event and made my way to Coventry nice and early to make sure I got there in good time, which I did. Me and the Cov Blogger girls got talking before the event and it was a lovely start to a Sunday afternoon. 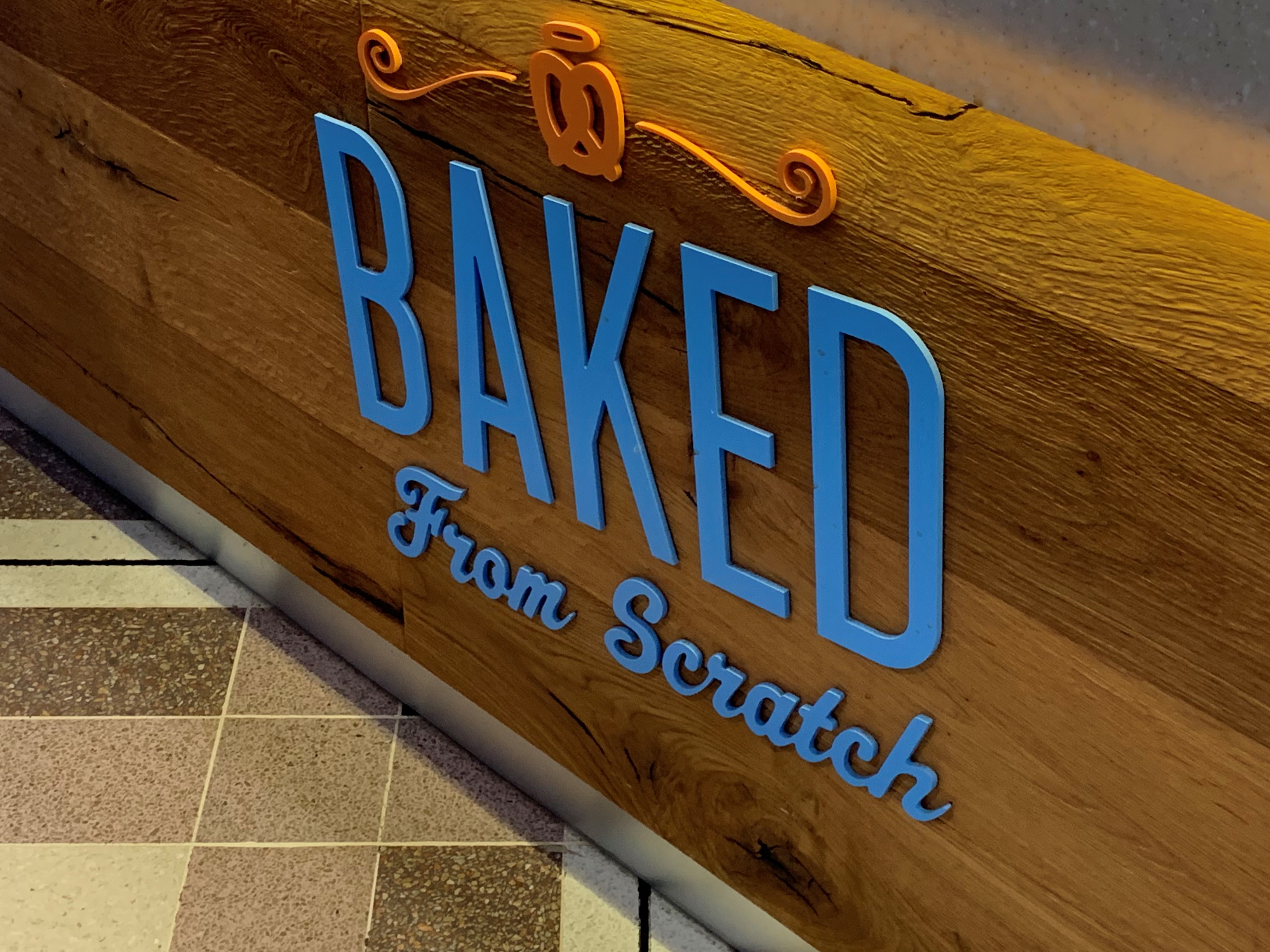 This was a gifted experience for promotional and reviewing purposes, so all views on this post are entirely my own.

We were told we would each get the chance to make a sweet pretzel with either vanilla sugar or cinnamon sugar. As I’ve only tried the latter I was excited to give vanilla sugar a go!

We went up individually to the table and was shown how to roll out the pretzel dough and then do a special technique to get that pretzel shape we all know and love.

I was really nervous about this at first, but after watching Amy (Writing into the Ether) give it I go, I was confident enough to go next! 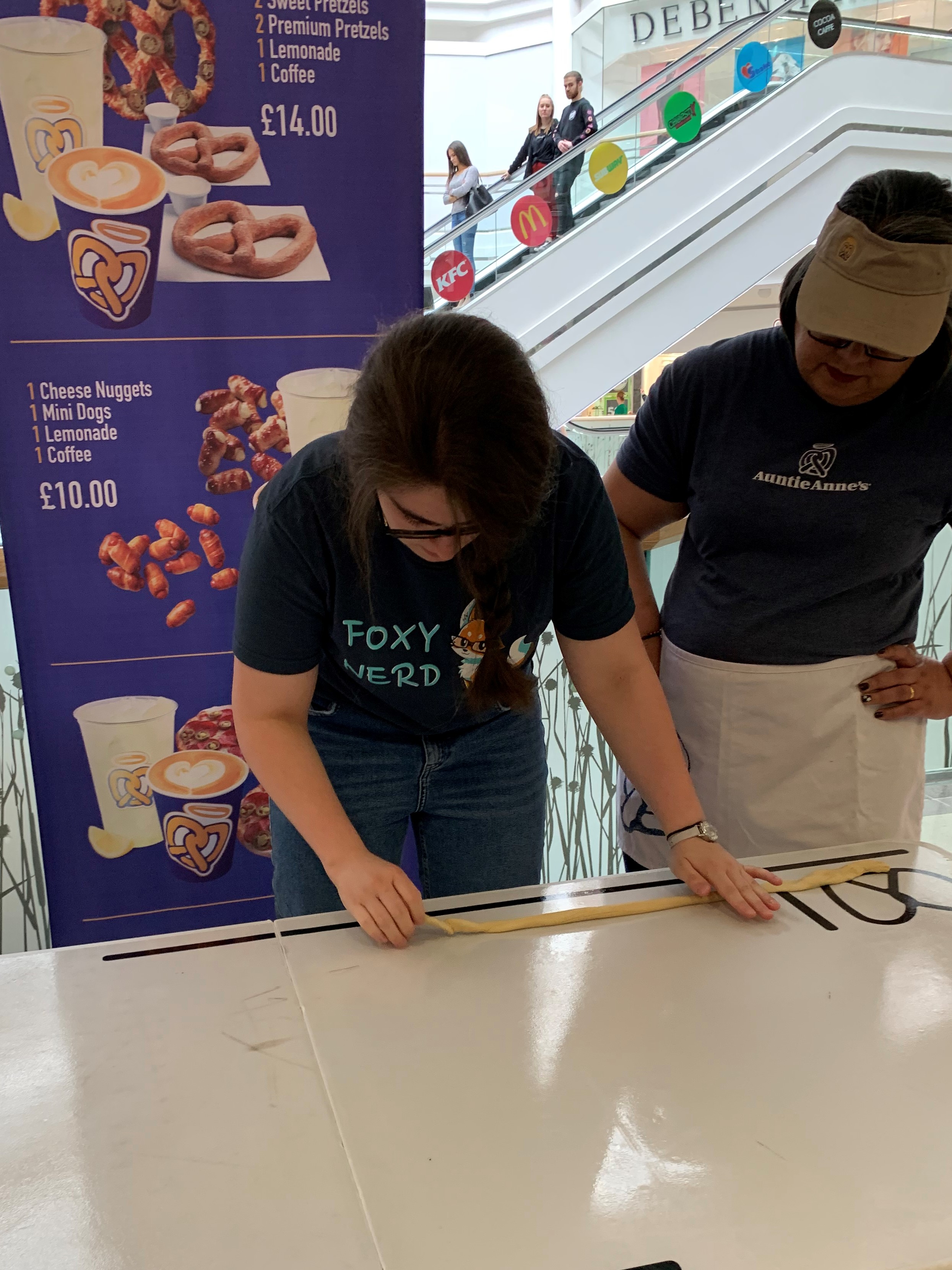 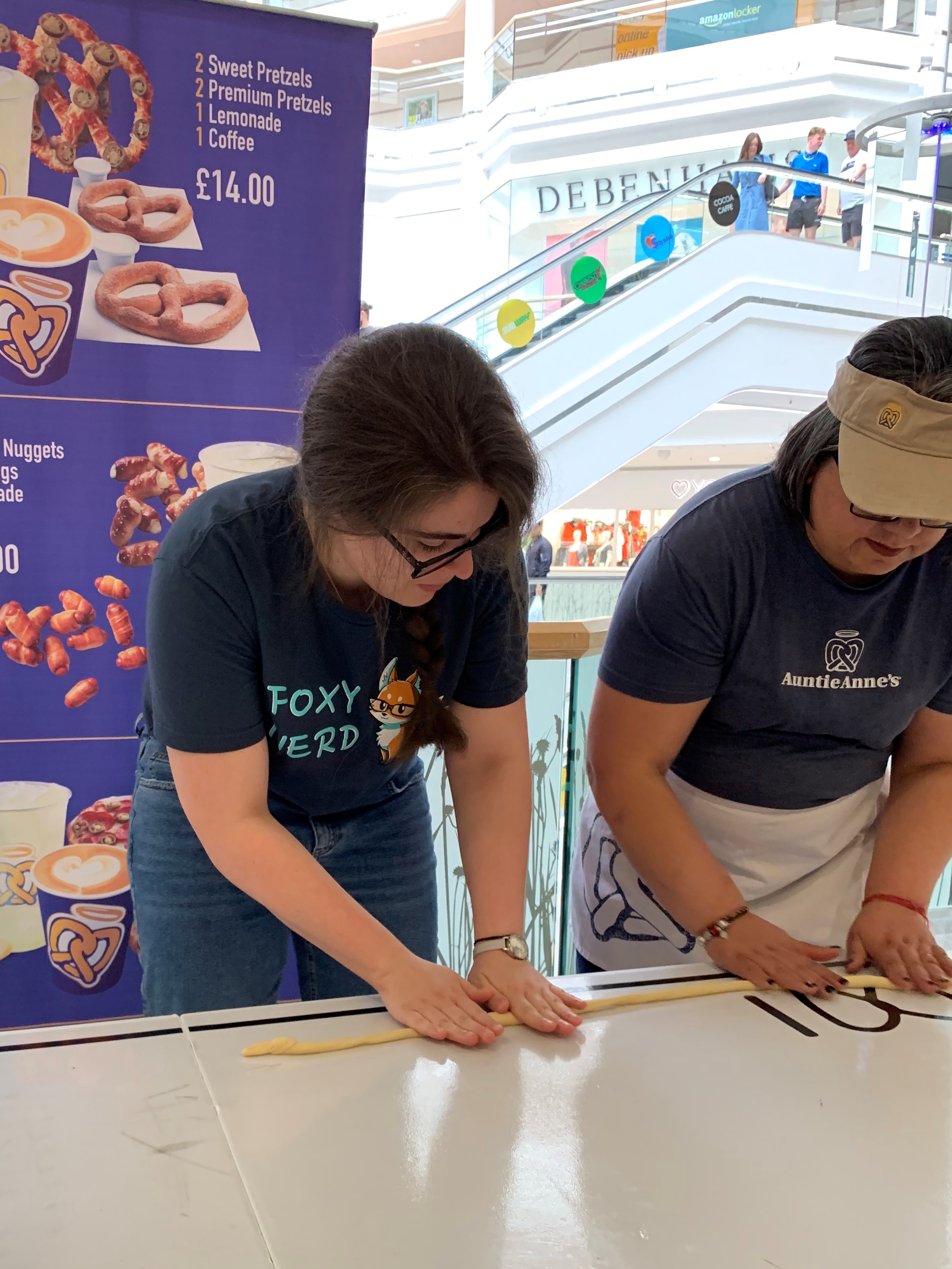 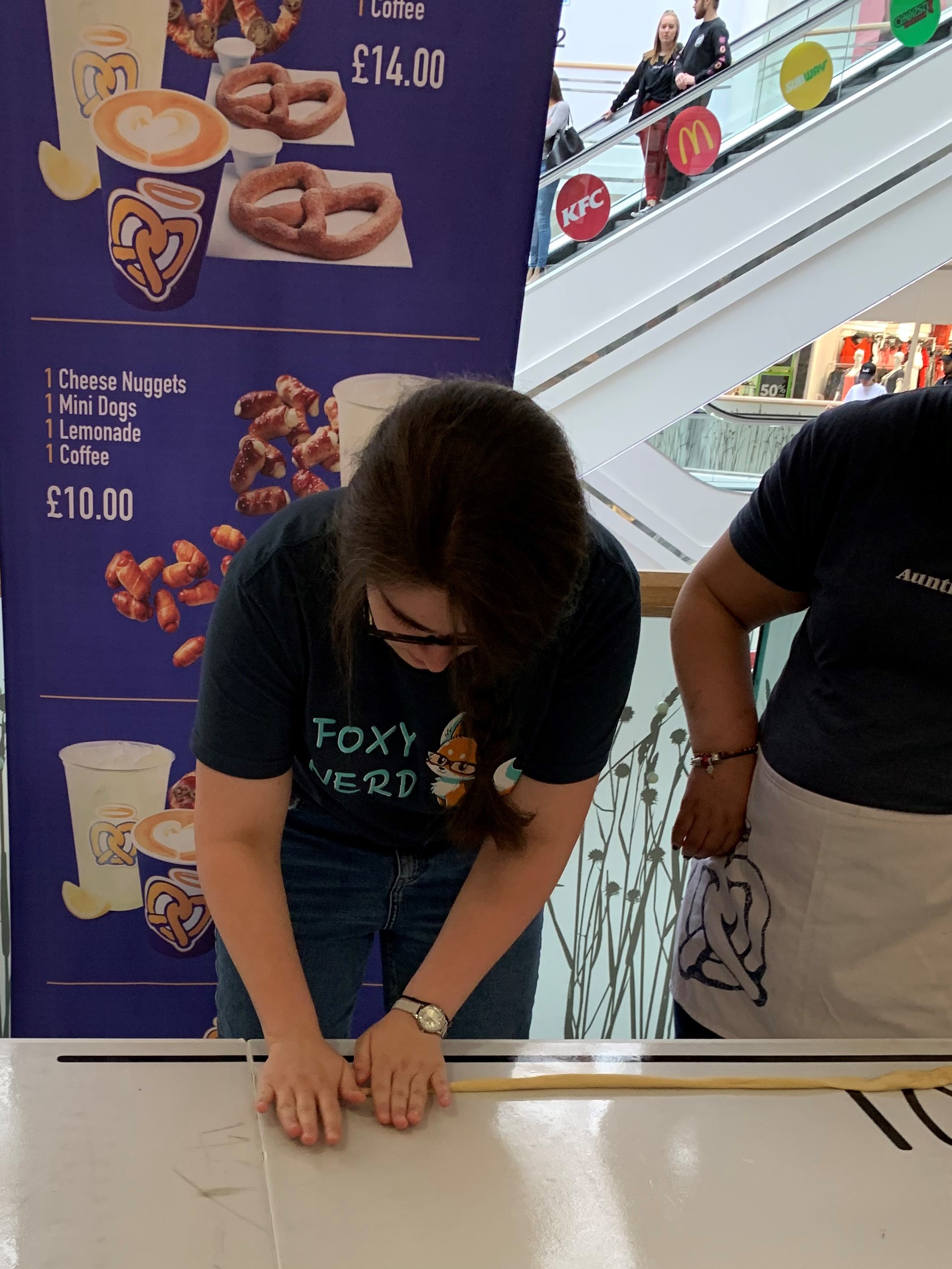 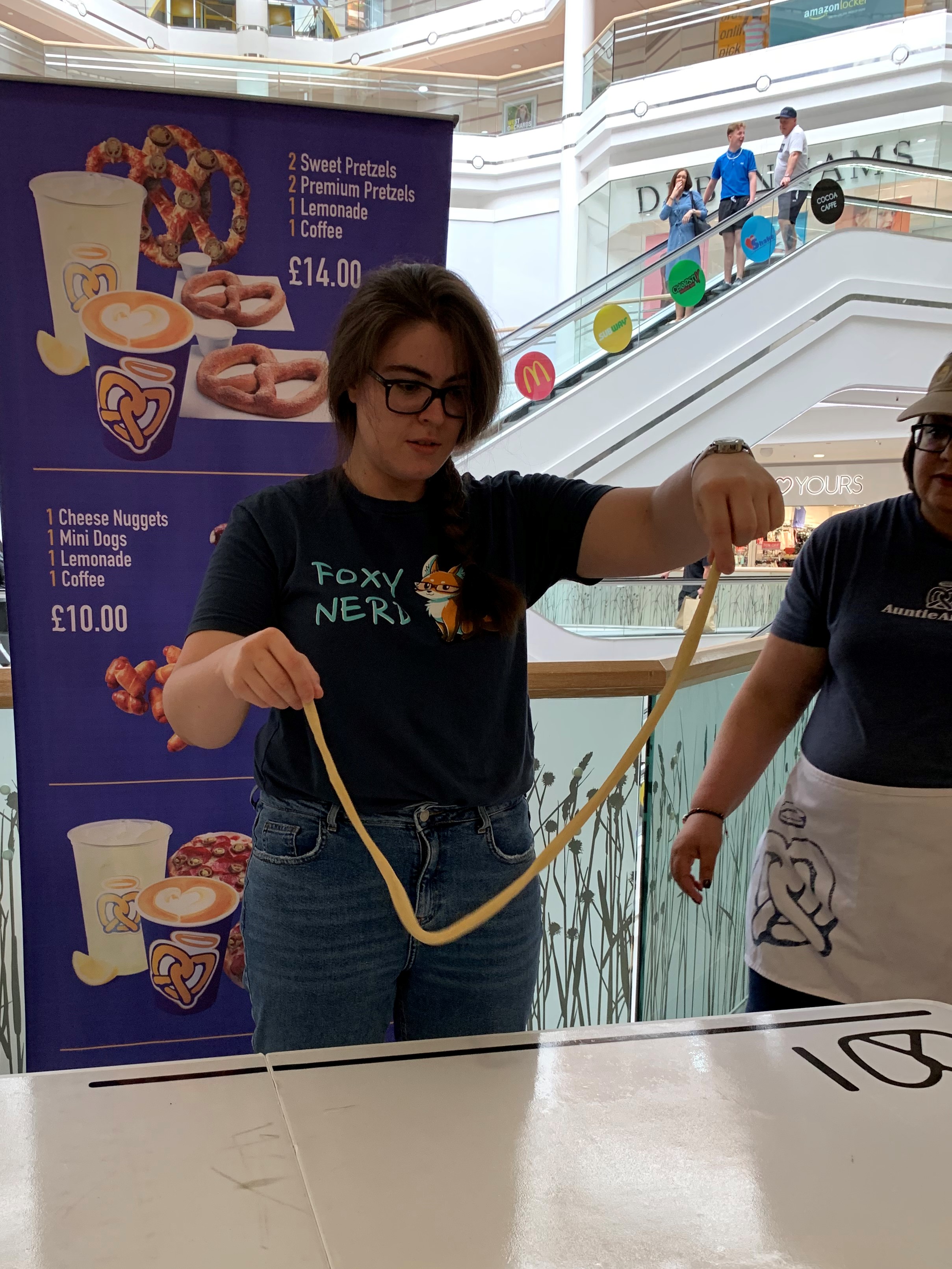 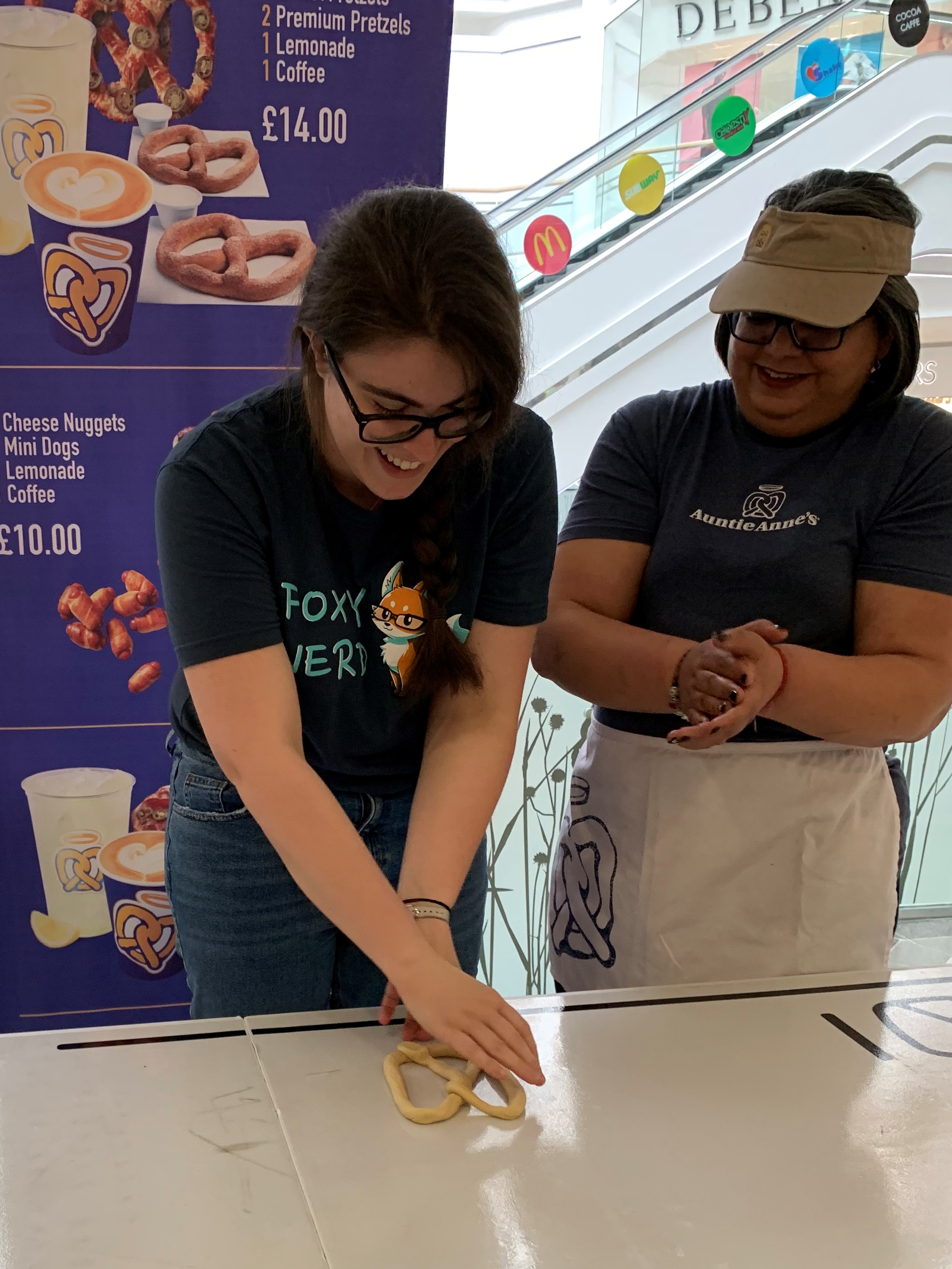 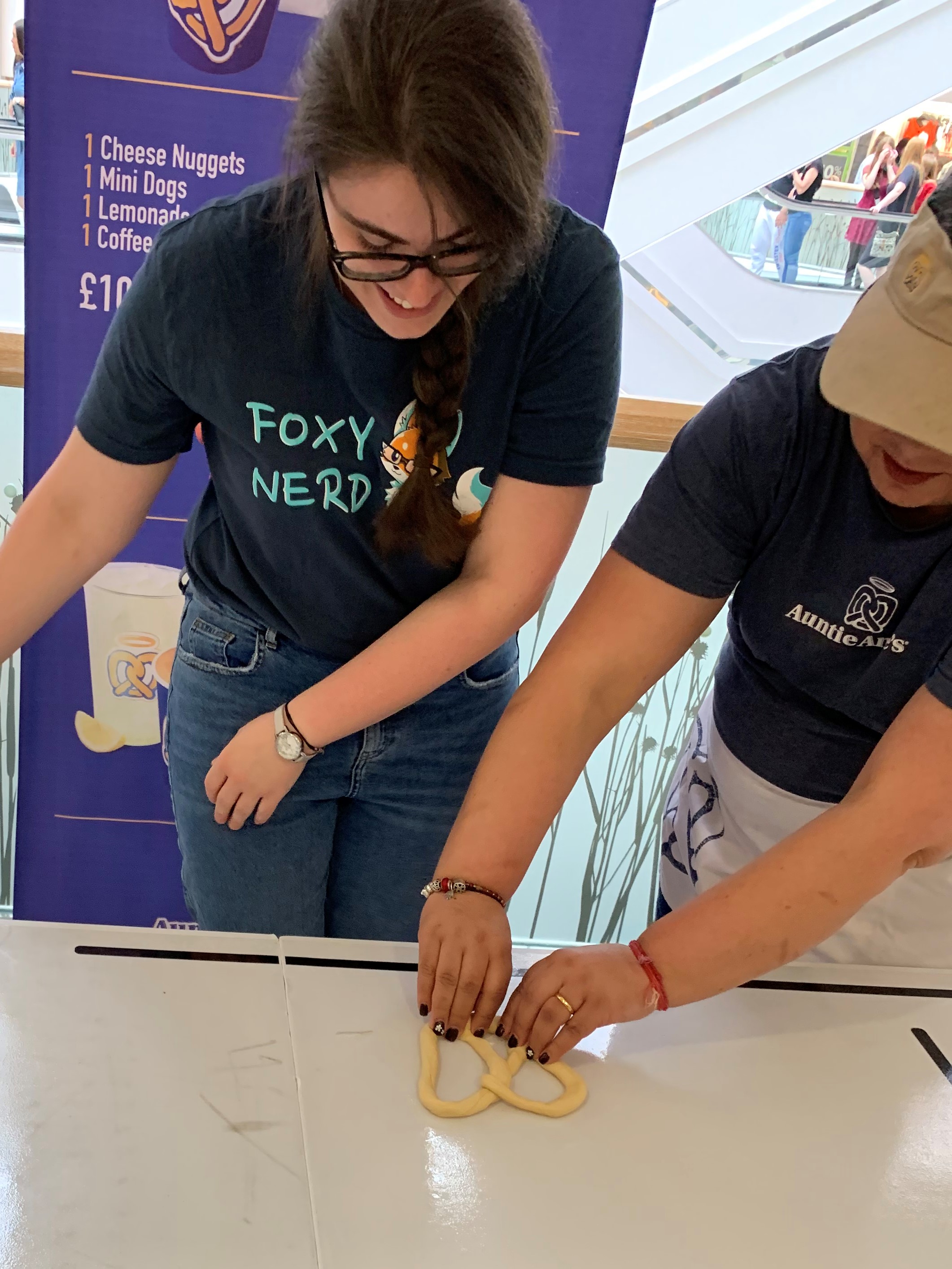 It was so much fun and I was so pleased that I got my pretzel shape first time around! Apparently I did the best out of everyone and due to this I featured on the live video that day over on the Coventry Bloggers Instagram page. 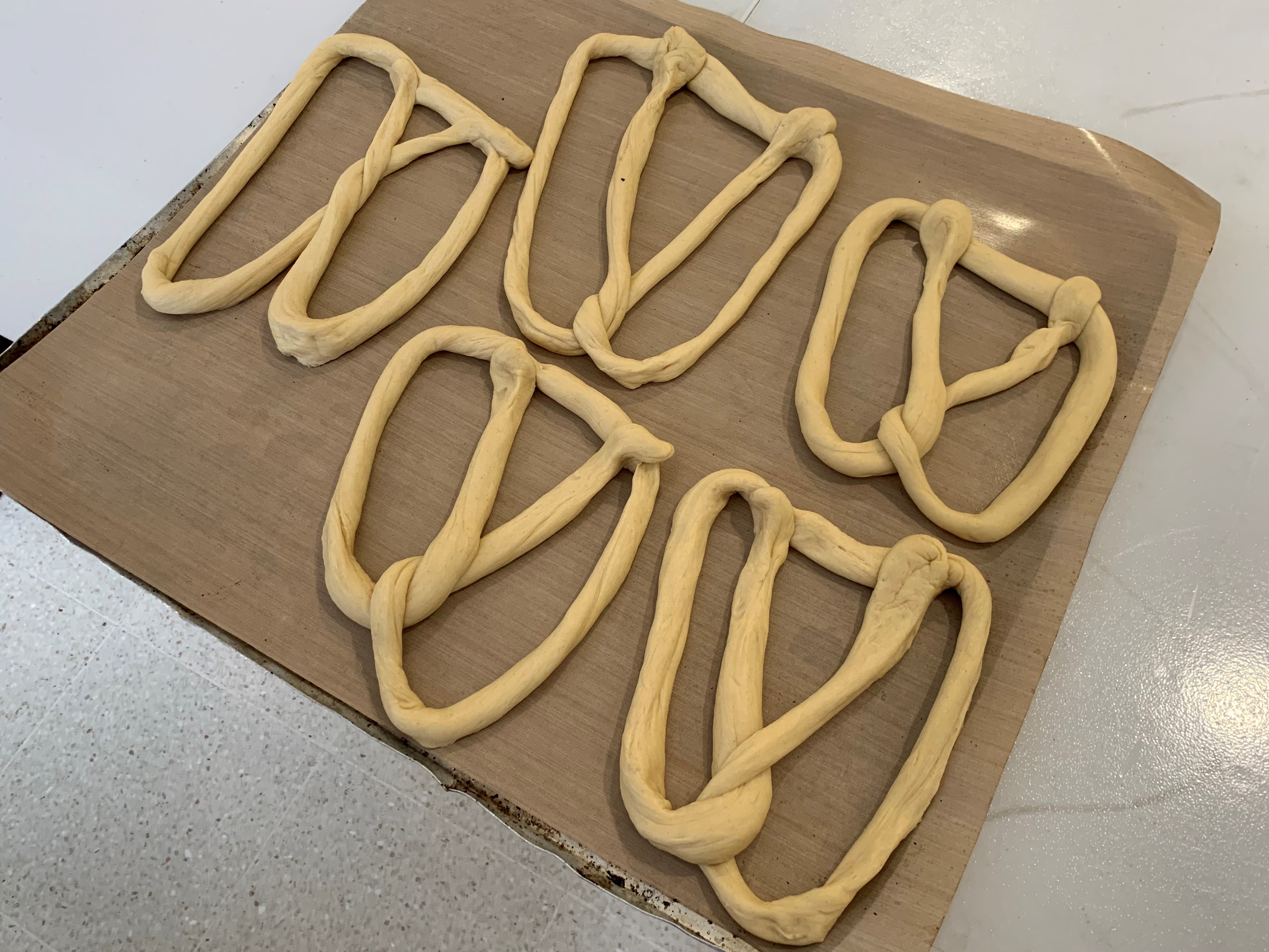 Once these were all done, they were put on a tray and ready to be put into the oven! Whilst the first group of us were waiting for our goods to bake we were give an amazing little goody bag each, as well as some new sweet goodies to try. 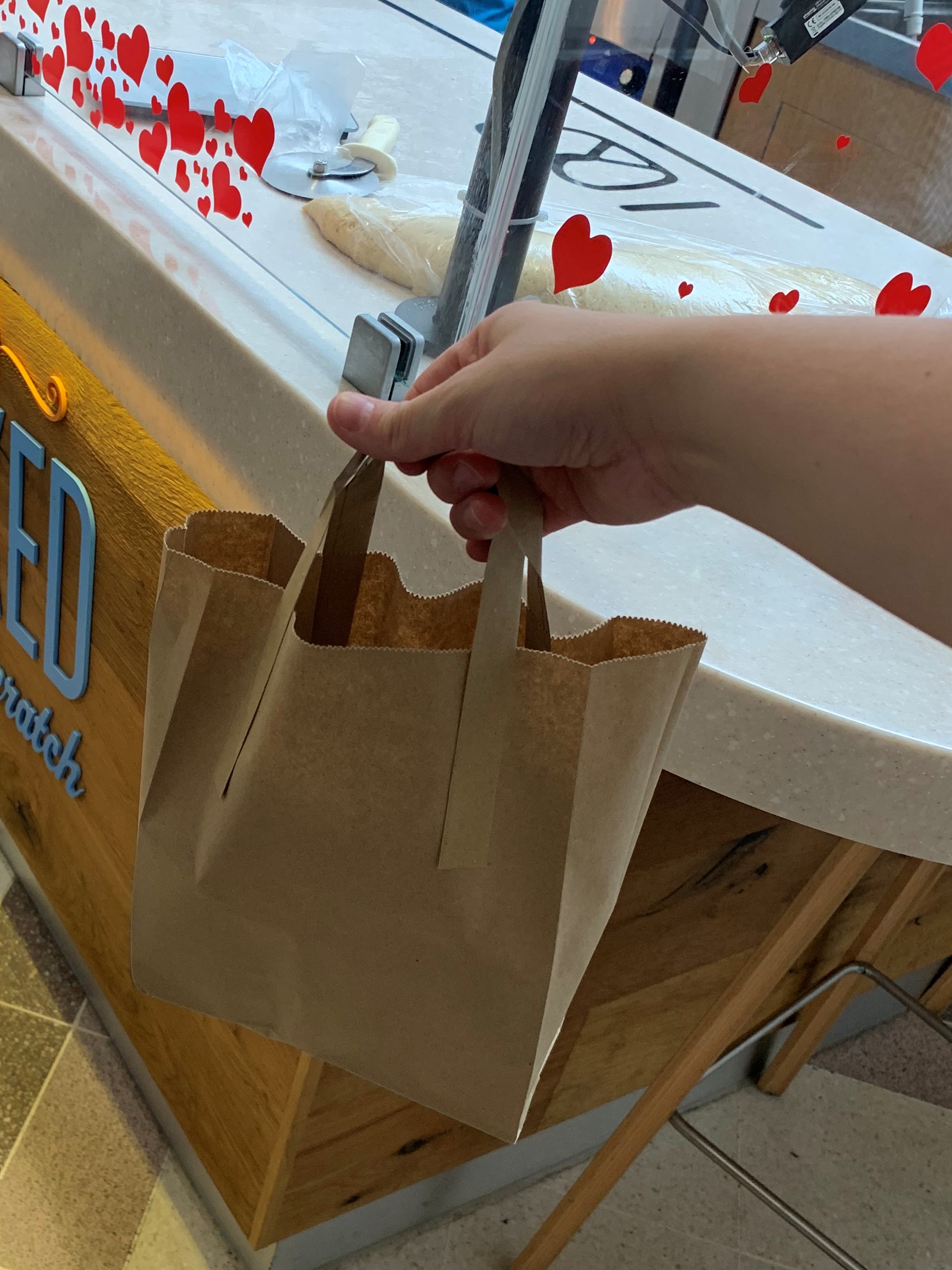 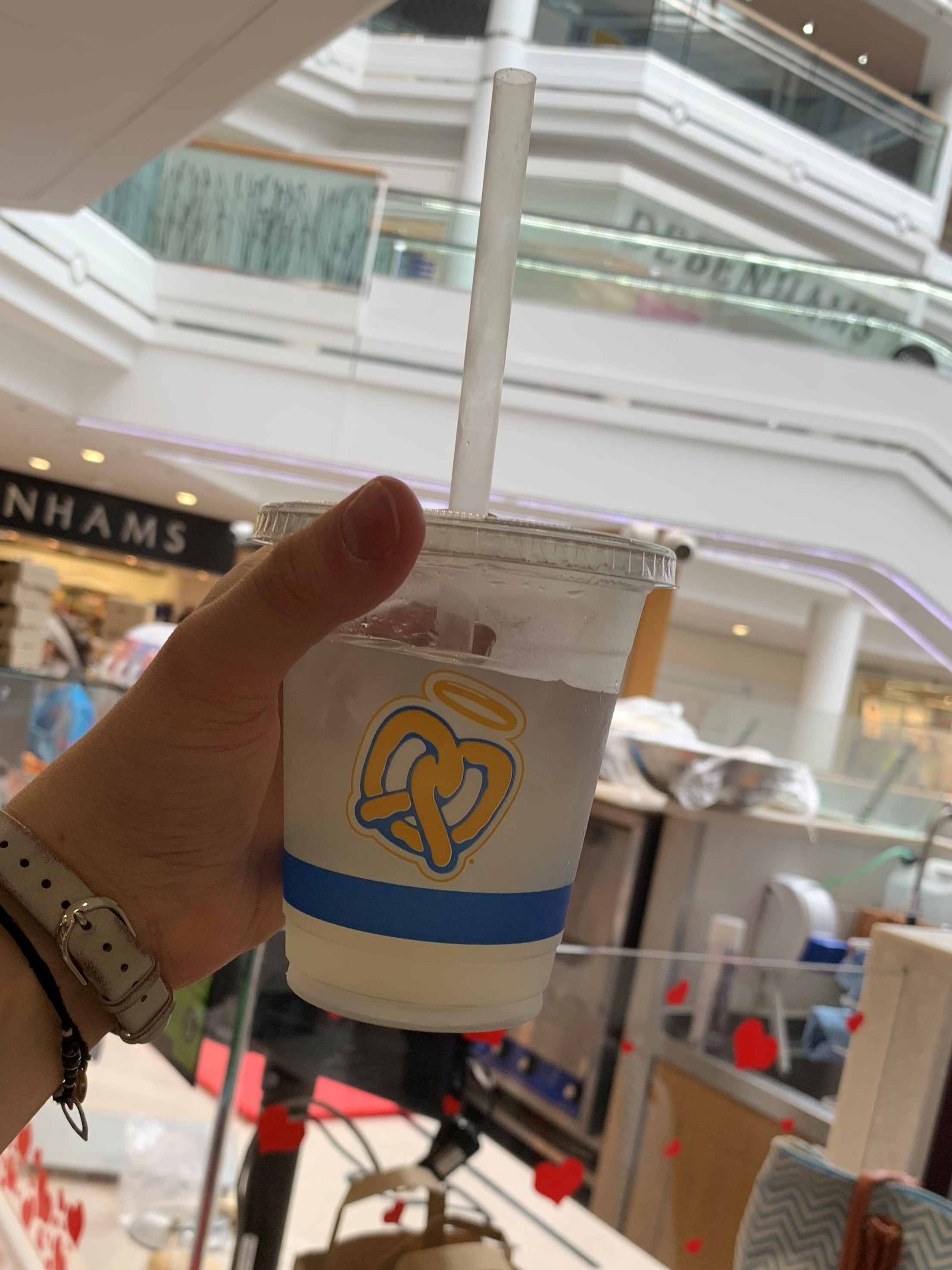 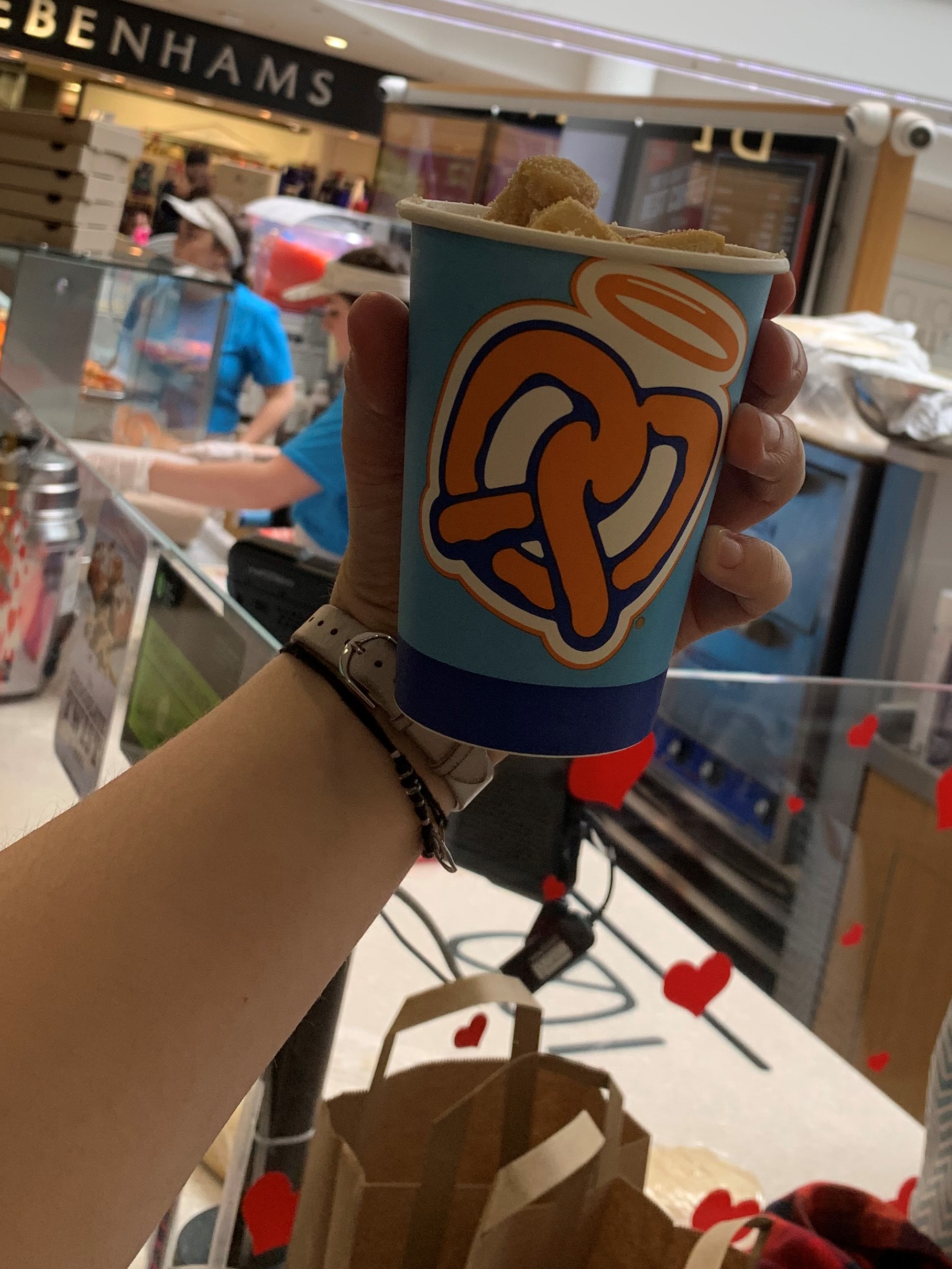 In our goody bags we either received Cinnamon Nuggets* or Vanilla Nuggets*, I received the latter and they were so yummy! So bite sized and perfect for on the go if you want something sweet to snack on. These were lovely and warm when we were given them too so I made sure to eat as many as I could whilst they were. I did end up taking half of the pot home to share with Dane. We also got a cup of their Fresh Lemonade* which was so damn refreshing and yummy! I’d never tried it from Auntie Anne’s before and I really did enjoy it. I could have easily had another cup. 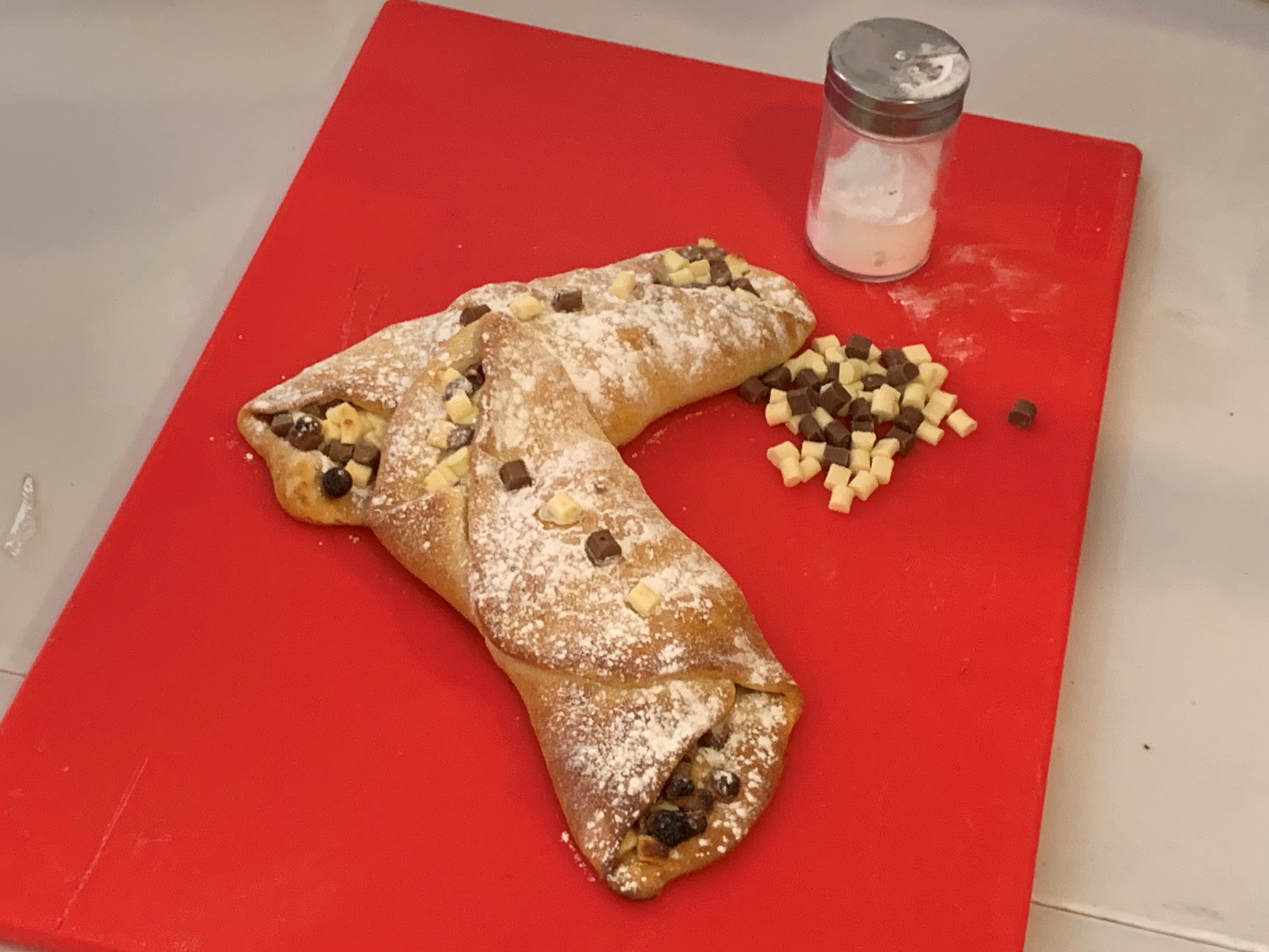 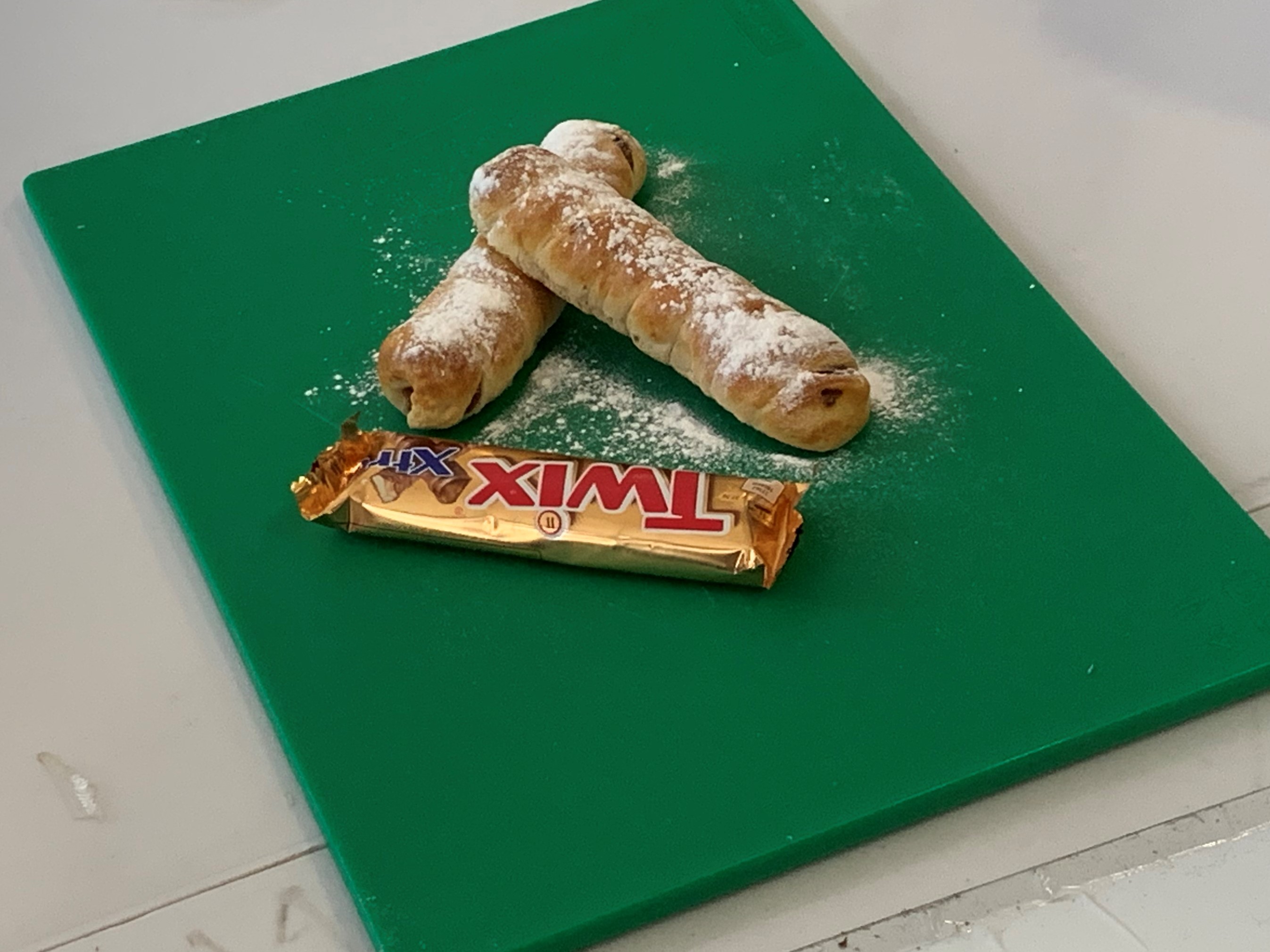 We got to try one of their new sweet treats which is a pancake/crepe shaped pretzel dough mixture with loads of chocolate drops inside! It was okay, but a little too chocolatey for me…

I’m not a Twix fan but when I saw that they had wrapped pretzel dough around one, I knew I had to give this a go. That was good! I really enjoyed it to be honest with you and would definitely pick it up again if I fancied something really sweet. 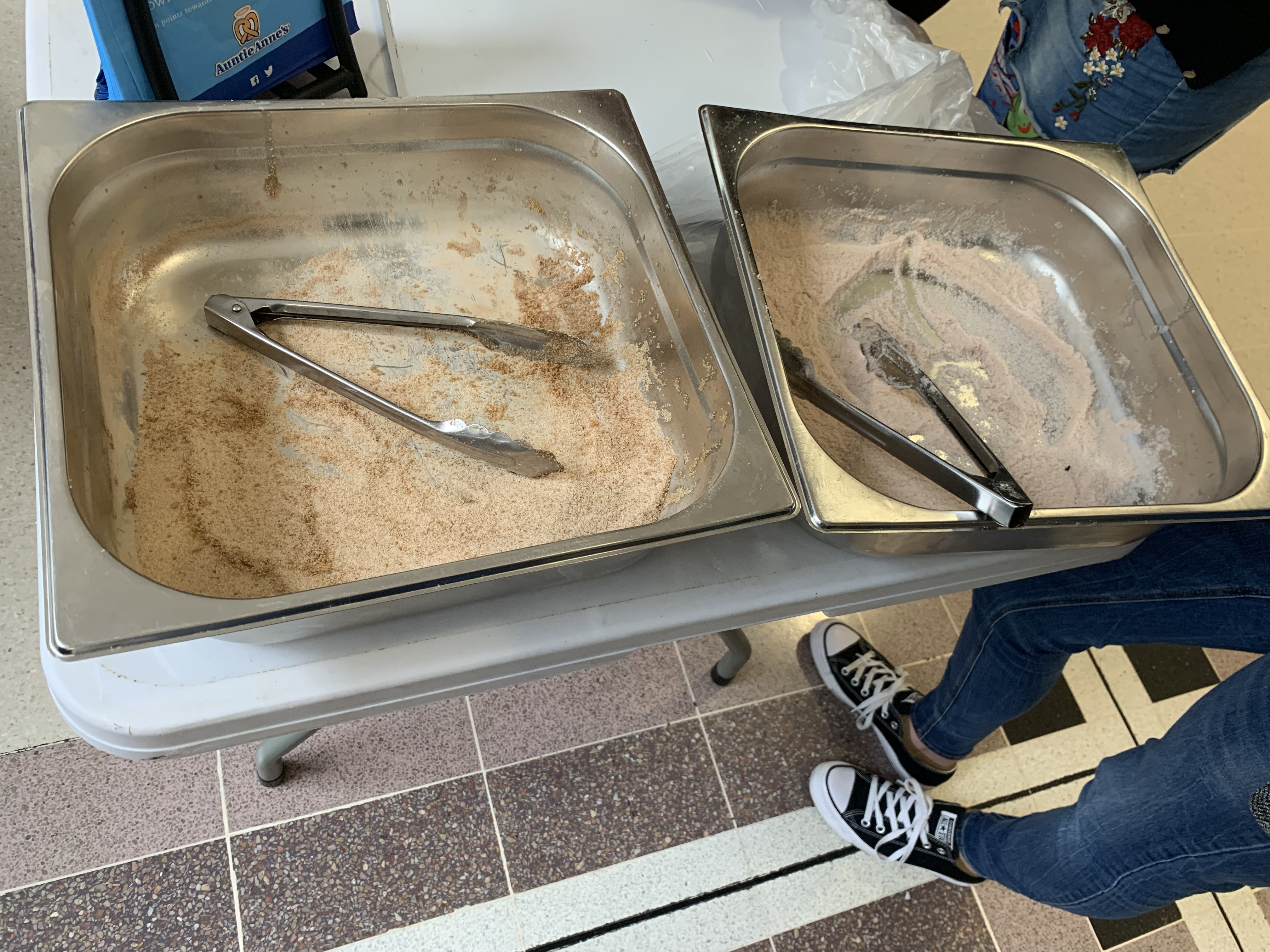 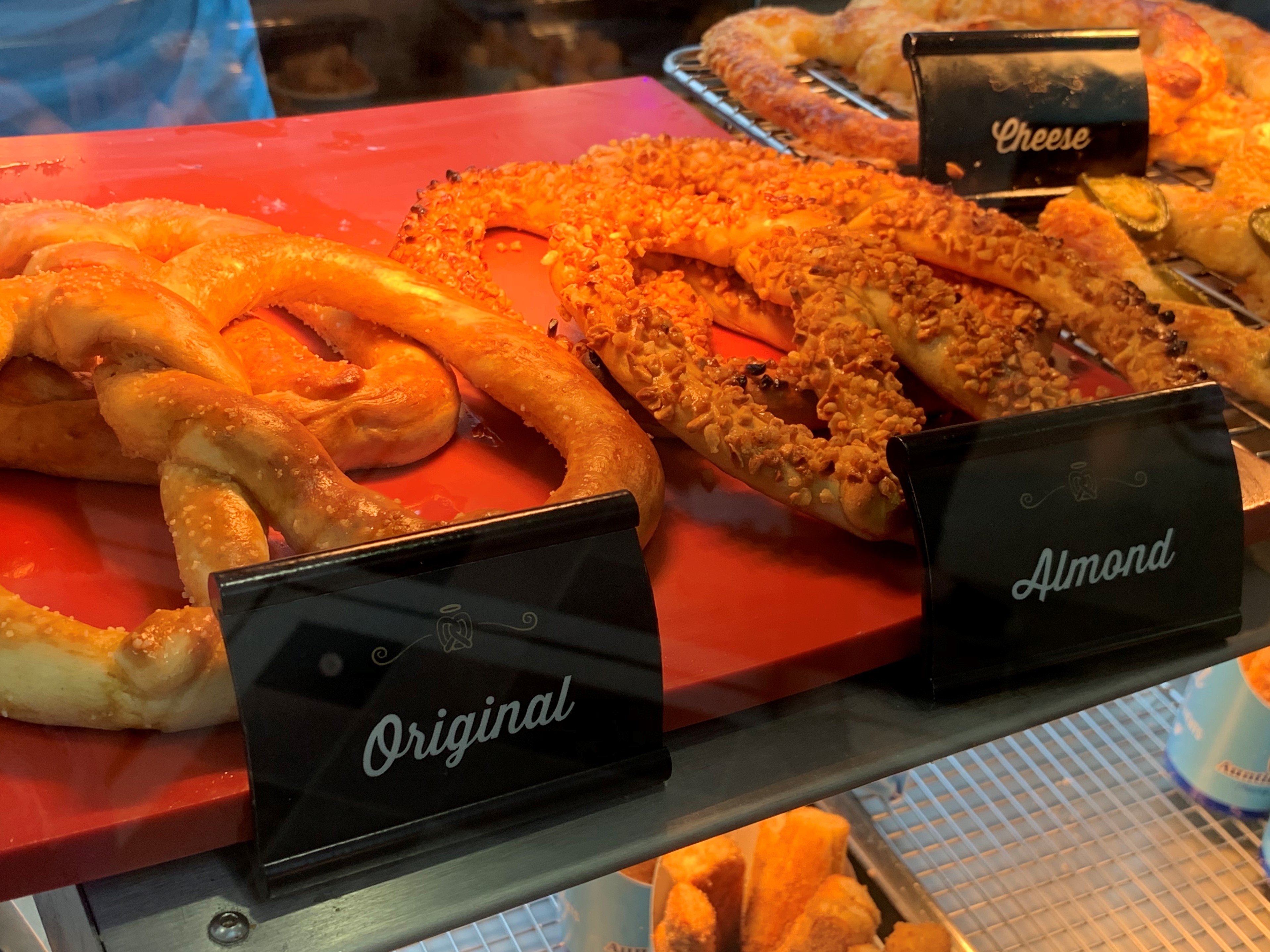 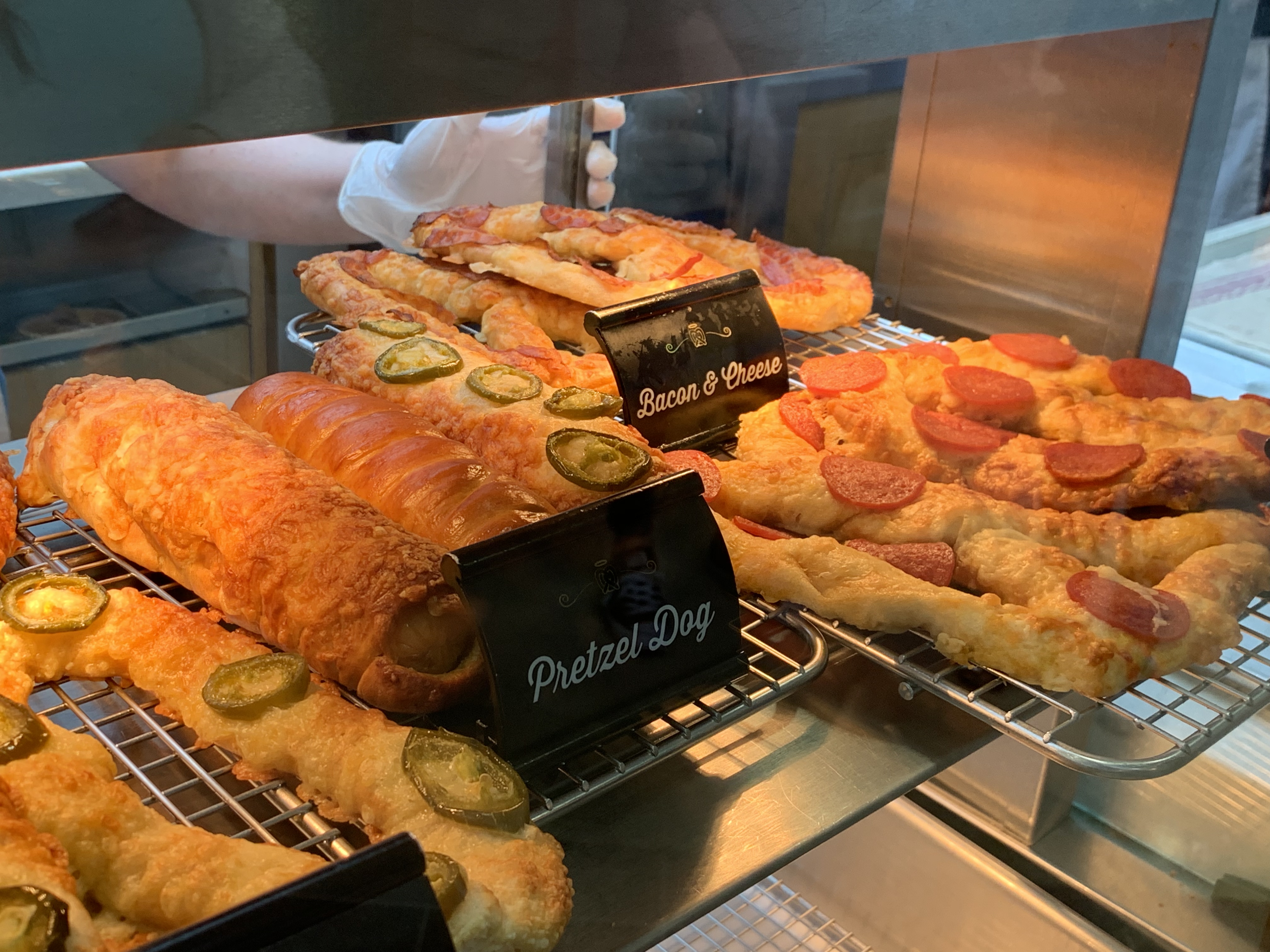 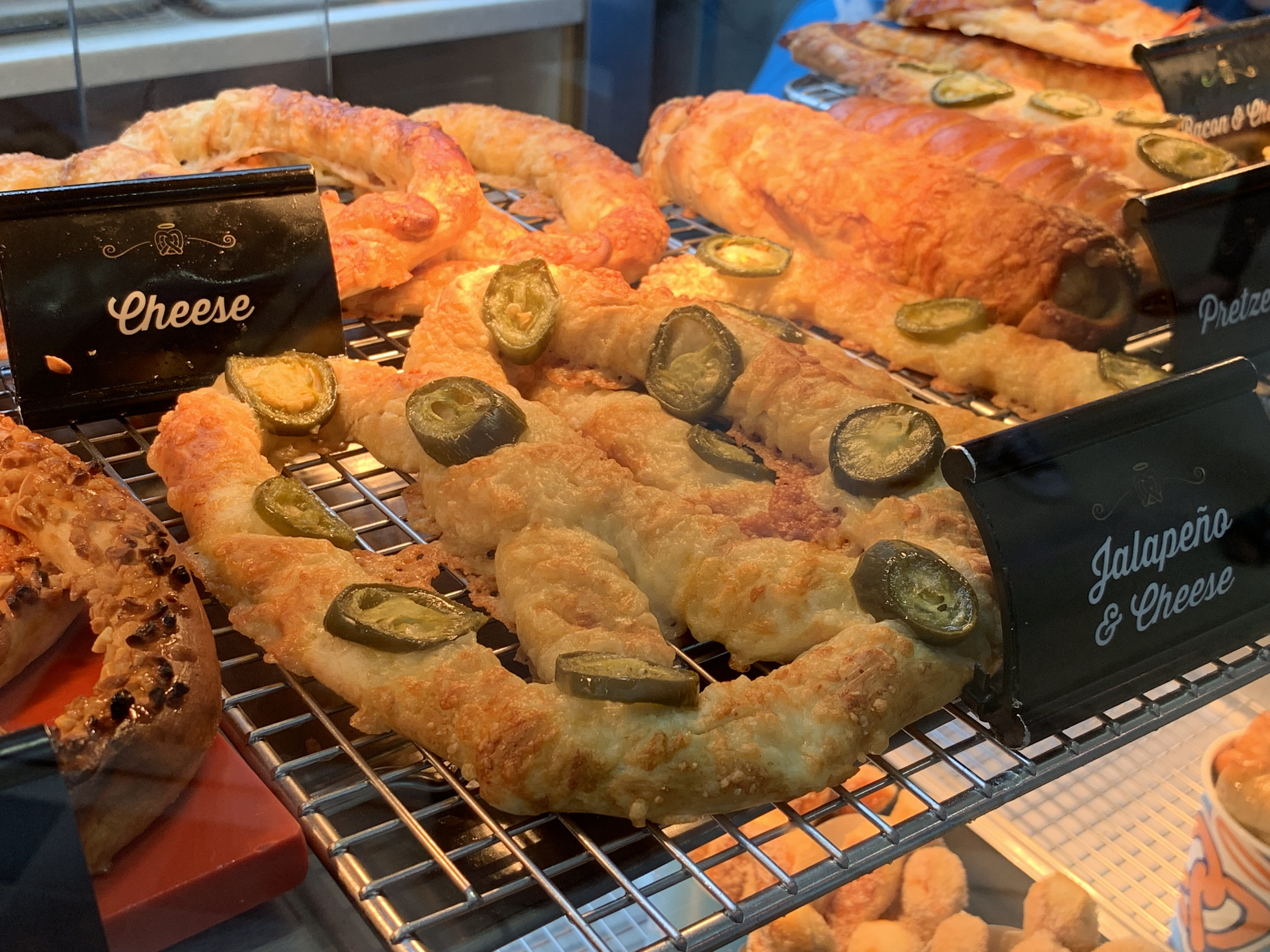 Shortly after this and as the event was beginning to come to a close, I decided to grab some yummy food to eat around Coventry and then headed home. 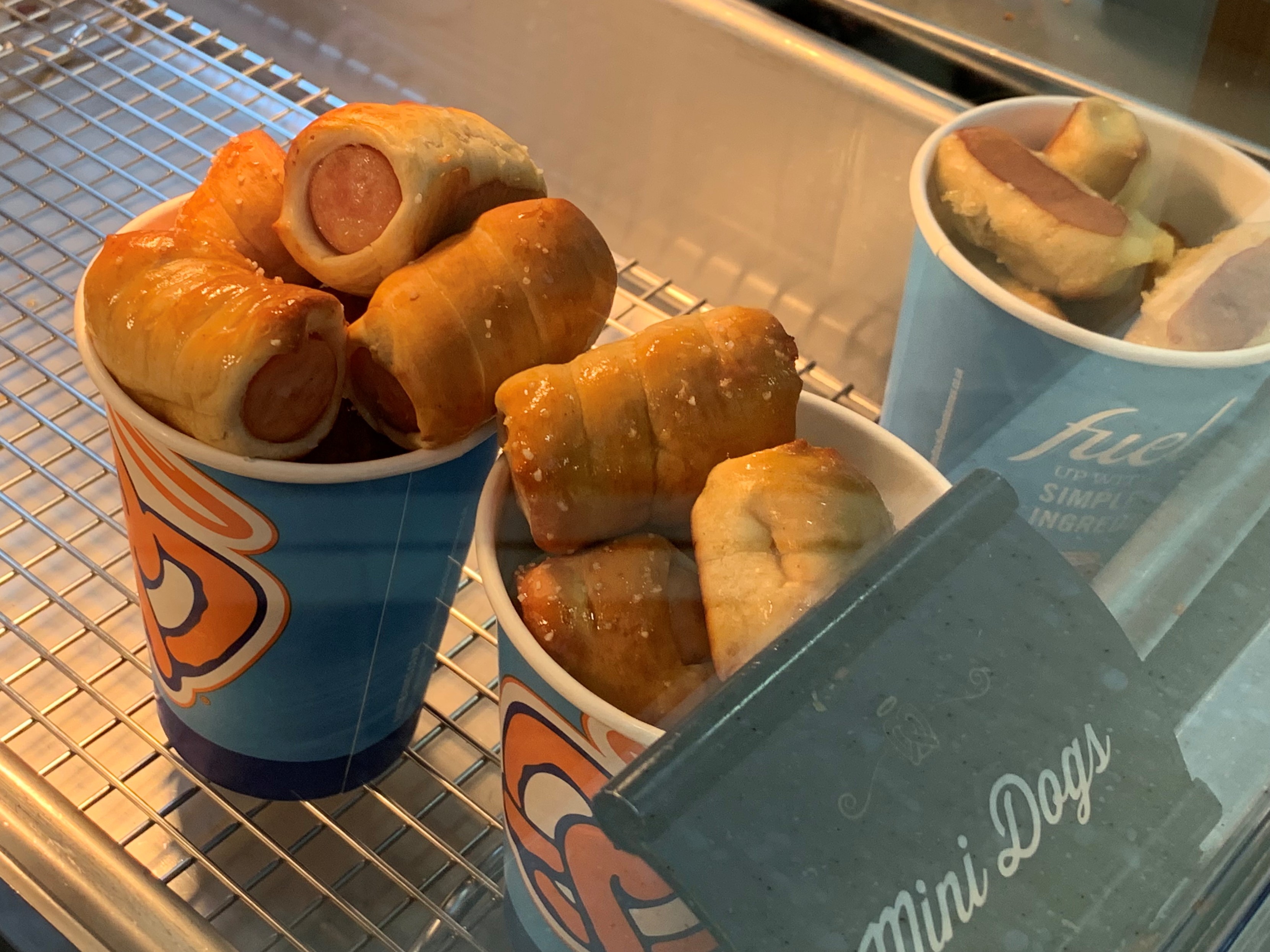 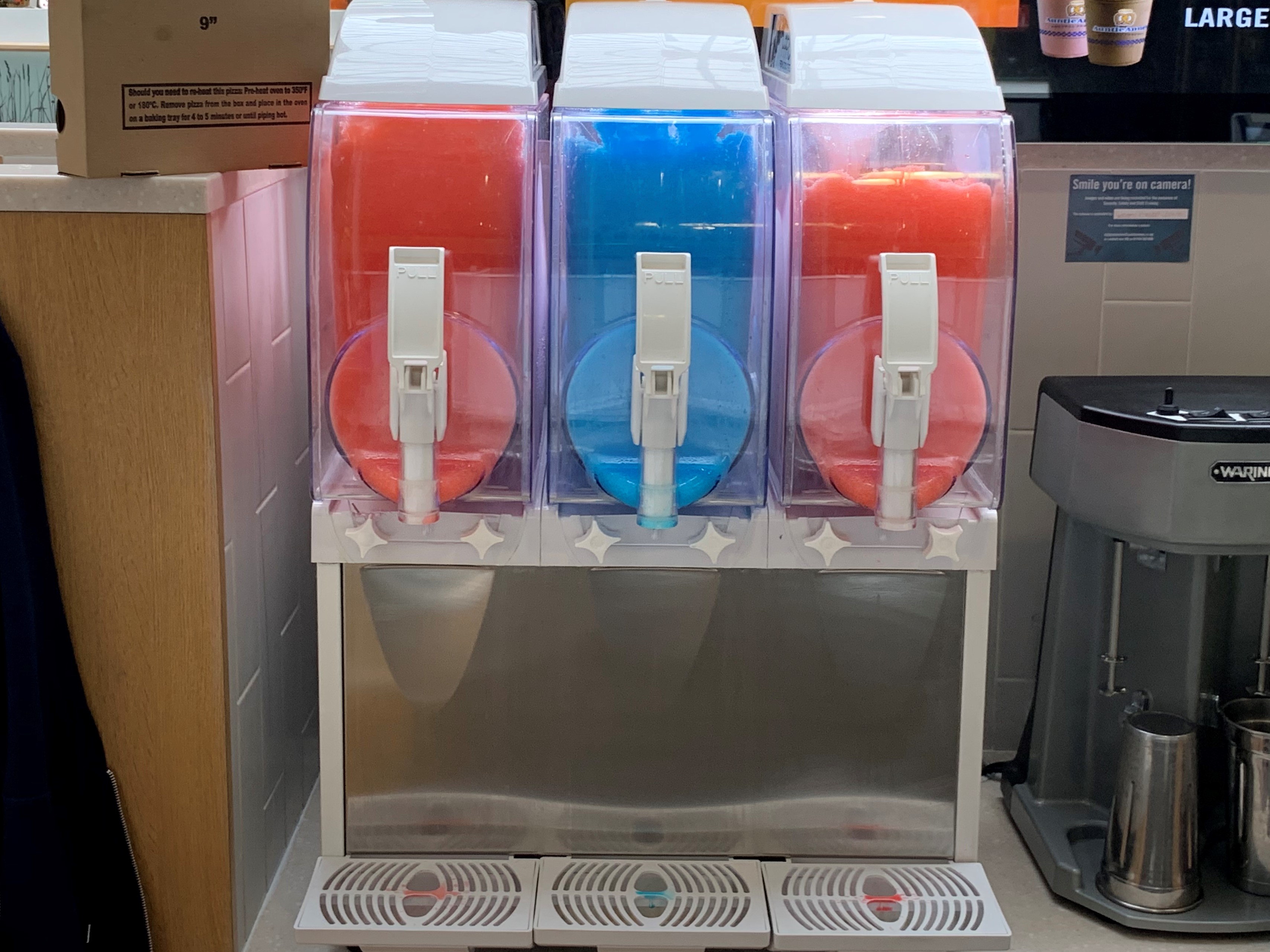 I honestly love Auntie Anne’s so much and whilst I’m talking about it, I’m seriously craving everything, especially my favourite – the little hot dog rolls. I also love the dutch ice (Slush Puppies to you and me!) and was sad that I didn’t pick one up that day, as it was really warm!

Overall I had SO MUCH FUN at the pretzel party and was delighted to take part in the live stream too!

Do you like pretzels? Have you been to Auntie Anne’s before? Let me know your favourite flavour of pretzel. Mine is either sesame or pepperoni and cheese.

Until next time all, take care and I hope you all have a lovely weekend!