We’re already a week into August, I can’t believe it! This weekend for me has been really nice and I’m quite grateful, I’ve needed something to cheer me up after how shite July felt. August is full of lots of time off for me and Dane which will be really nice, even if we don’t do much, just having time to relax together will be nice.

For example, Friday I went out with my dad for the day and yesterday me and Dane spent pretty much all day playing LEGO Star Wars: The Skywalker Saga, which is so much fun! After my blog post is live, we’re planning to play this all day again and cook a yummy dinner.

Anyhoo, I’ve ordered some of the bits on my monthly wish list, which I’ll mention when it comes to talking about the item(s) in question. Some of the items I’m waiting to go down in price, and more, but as always I’ll talk about it on each item.

I hope everyone else has had a good start to August! On with this months wish list post! 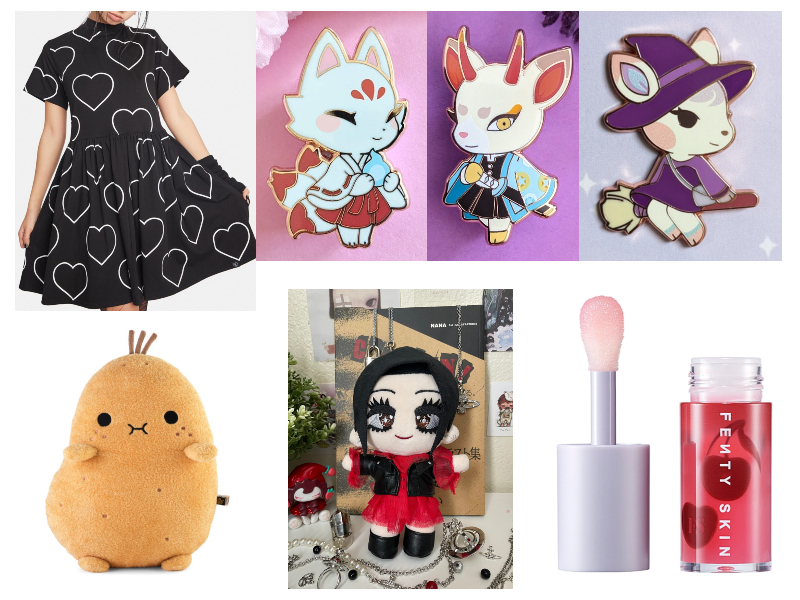 This is a dress I’ve been after for what feels like forever. I’m waiting for it to go down in price, or appear on Depop/Vinted before I buy. I own on smock dress from Fearless Illustration which is incredibly comfortable! I really do love wearing my smock dresses these days as they’re incredibly comfortable for all seasons and if anything, I’ve been wearing them more and more for work lately. If I was to pick this dress up, I’d wear it for work as well as in general as the design is really simple with the large hearts.

This is a plush I’ve been after a while, in its smaller form, but when I saw they brought out the giant version I had to share it with you all today! I don’t think I’d buy the giant version, not going to lie as I don’t have the room, but look how adorable it is! This looks like an amazing plush for snuggling into after a long day. I’d still love the smaller version though. 😛

These are some Animal Crossing fan design enamel pins I’ve ordered, as Yui the Kitsune is one that has been on my wish list on Etsy for as long as I can remember. It was due to sell out from what I could see, so I decided to place an order in case I missed out, but as YuenaShop is based in the United States I wanted to make the shipping costs worth it. I decided to order three enamel pins, Yui, Shino and Diana. Yui is an original character that is inspired by a Kitsune, Shino the deer villager whose outfit reminds me of Demon Slayer and then Diana who is dressed up as a witch! I’m really excited to get them by the end of the month now to display on one of my pin flags!

This is something I’ve ordered earlier today and I’m so excited for it! I’ve been on the hunt for it for a while now, but Boots hasn’t had it in stock. I ventured to a Boots store on Friday to see if they had it still (stated online the store had it in stock) and they’d sold out! Thankfully this morning when I had a nose online they have some back, so I used my Advantage Points to get one! I’m really excited for this to arrive! I find some days I don’t want to wear lip products, but I know if I throw this in my bag on office days I’ll make sure to wear it. 🙂 It’s said to smell really delicious and leave a nice pink tint behind.

Finally we have another plush to mention this month, but this is one of Nana Osaki, one of my favourite manga/anime characters! So, to see someone has created a plush of her has made me so happy! I don’t know if/when I’ll buy this, as it isn’t exactly cheap, but it’s definitely an item I’ll keep eyes peeled on in the future to potentially get. 🙂 I honestly love Nana, so to own a plush of her would be amazing.

So, there we have it, my wish list for August! I like to think there’s been a good variety of goodies mentioned this month! What do you like the look of from my wish list, as well as what’s on your own wish lists? Make sure to let me know in the comments below!

Until next time, take care all and I hope you have a lovely rest of your weekend!