As I said a few days ago, how on Earth is it October already?! This year has flown by in a busy haze and I just want time to stop for a little bit. I’m writing this post over the weekend and I honestly can’t believe it’s currently 7.30pm! Where is my precious weekend going?!

What better way than to spend my evening doing blog work and listening to Radio Bam. I don’t mean for that to sound as sarcastic as it probably does. I love writing on my blog, I find it quite relaxing and it takes my mind off of anything that’s on it.

I haven’t really thought much about what items I’ll be talking about on my wish list today, but I worry it won’t be much, or at least anything exciting! Fingers crossed eh?

Well Christmas is around the corner, so I’ll definitely be needing to save monies anyway. 😛 I hope you enjoy this months wish list anyhoo! 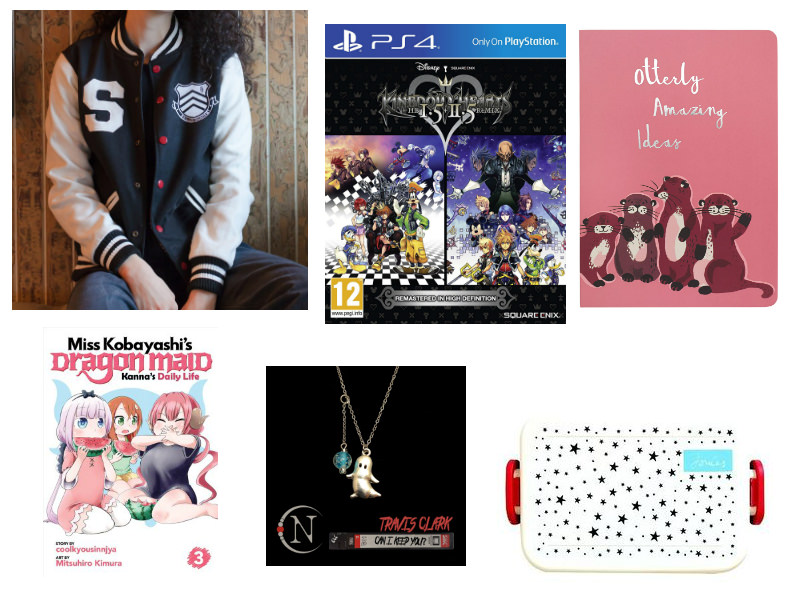 I rather like NTIO and have done for years. I’ve even mentioned them on my blog before (which you can read here) and still wear the bracelet I picked up in March. I was having a nose at the Halloween collection and stumbled across this cute ghost necklace! I’d love to get it but the one thing that puts me off is it isn’t real silver, it’s plated. I sound so snobby, but I hate wearing plated jewellery, it turns your skin green! This is definitely something I’ll have to think about getting.

I have been pining over this jacket since it came out a couple of months back. I thought I’d mentioned it on my blog before, but alas I haven’t! The reason I haven’t bought it yet is due to the price. It isn’t the cheapest jacket in the world sadly at £65 and I’ve ummed and ahhed the decision on buying it due to that. As readers will know I went to EGX a couple of weekends back, (which was amazing by the way) which Insert Coin Clothing was also at. Sadly the size I wanted for this jacket was sold out so I couldn’t pick it up. The staff were so lovely and gave me some vouchers so I could pick up the jacket for a cheaper price, which is lovely! I can’t wait to get it for autumn and winter now.

If there is a high street brand I have fallen in love with the past year it’s Cath Kidston. Their items are so adorable and vintage, you can’t go wrong at all. I especially love stuff that’s got cute animals on. I loved their fox collection so much when it was out! When I recently visited one of their stores I discovered they have quite a few cute animal collections out, including their Otters collection! This notebook is adorable and I’d love to have it as my journal for 2019! I have so many notebooks though, that I honestly don’t need anymore!

Years ago I picked up this game on the PS3 but considering I don’t use my PS3 as much as my PS4 anymore I’ve not really played it, sad times. The first thing me and my best friend Gabriella did at EGX was go and play Kingdom Hearts 3, which I loved SO DAMN MUCH! I really need to pick this game up soon so I can play it before the new one comes out. I forgot how much I actually enjoyed this series. I don’t know if I’ll buy this just yet as I have so many games coming out for the rest of the year. I might just ask for it for Christmas and play it with Dane. Who knows… We’ll see!

After this post I’ll get this preordered as I want this when it comes out. I love reading manga so much and one of my favourites to read is the Miss Kobayashi’s Dragon Maid ones. They’re recently announced that they’ll be releasing a manga series about Elma, one of the dragons and equally one of my favourite dragons! I can’t wait to see what happens to Kanna next, she’s adorable.

This isn’t anything special and whilst I doubt I need a lunch box for work, I REALLY love the look of this! If anything it would probably encourage me to make sandwiches for work instead of buying them once a week. It’d also be great to take leftover dinner in. 😛 It’s just adorable and it’s a decent price for Joules too, don’t you think?

So that’s my wish list for this month! What do you guys think to some of the items I’ve added to it? What items do you have on your wish lists this month?

Until next time, take care all and I hope you’re having a lovely week so far.

Happy Hallowe’en all! Hallowe’en is my favourite time of year and what better way to celebrate it this year than by writing up a blog post about it for you to read!

Every year for as long as I can remember I have celebrated it, whether I dress up and go out, carve a pumpkin or do something else I just enjoy being able to celebrate it somehow, as it is one of my favourite holidays of the year, Bonfire Night being another.

I haven’t really dressed up for Hallowe’en for a while, but it seemed like fun to try and do something for it this year. Even if I don’t end up going out tonight, I’ll still have a go at making myself look spooky! I’ve seen some make-up tutorials with ideas on what I could do this evening, which I’ll be sharing with you later in this post.

I wouldn’t mind carving a pumpkin tonight, as I haven’t done it for years and it would be a lot of fun to do. Years ago my brother carved some Star Wars pumpkins just by using an easy trace guide that he downloaded off of the internet. I’d love to try and carve an R2D2 or a Stormtrooper! A typical ghost or spooky face could also be done for this too and I’ll probably leave these in the kitchen to burn away and look beautiful.

One thing I hate about Hallowe’en? Trick or treaters! I only ever went and took part in this tradition once when I was about 10 years old and I can safely say, I hated it. The neighbours were friendly yes, but I felt somewhat trampy and rather silly knocking on someone’s door chanting, “trick or treat!” to either be given their sweets, some money (on the odd occasion) or be told to piss off. It has never appealed to me and as the years have gone by and I have grown older and somewhat wiser, I’ve grown into a miserable adult who ignores children when they knock on my door. I don’t want to give a random child sweets, it seems wrong to me and as I didn’t enjoy going to take part in this as a child, I’m not going to change that. But if these dogs turned up at my doorstep dressed up as ghosts and holding their Jack-o’-lantern’s, I would give them as many dog treats as they desired!

I’ve saved the best until last… I love dressing up for Hallowe’en, it’s by far the best part about it. The last time I dressed up for Hallowe’en was in 2011 when I dressed up as Alex DeLarge from A Clockwork Orange. Not exactly a scary costume, but as it’s one of my favourite films, it’s always been something I’ve wanted to dress up as so to be able to do it and got lots of compliments on it, which made me happy! The year before that I dressed up as various Japanese characters, which was more cosplay than Hallowe’en but you can dress as whatever you like for this holiday and the amount of women and girls I see out clubbing in tiny little Ann Summers outfits, just proves this point.

I’m thinking of having a play tonight with some make up and create a few Hallowe’en looks to take pictures of. I told you I would show you some videos of looks I’m going to be trying out myself, so here are a few I’m going to try for myself. Just want to warn you, some of these, if not all of these videos are rather gorey and although not real, do look pretty realistic at times, so please watch out:

Gorey huh? But totally awesome! I really want to try the last one out, spook a few people out with it. 😛

Can you guess what he’s supposed to be? Let me know in the comments if you do!

What are you dressing up as for Hallowe’en this year? If you’re not dressing up, are you doing anything nice at all? Carving a pumpkin maybe? Let me know in the comments!

I wish you all a happy and safe Hallowe’en, until next time, take care.