Hey guys! Dane here! Nat is letting me loose on her blog again to talk to you about the regenerat-ing degenerate, Deadpool.
Today the merc’ with a mouth arrives on the silver screen. It has been an incredibly long time coming; both Nat and I have been incredibly excited since its announcement over a year ago. Recently we have seen everyone go crazy for the ‘pool, it is everywhere and to me that is a very good thing for fans of the character. You can’t be anywhere and not see an advert on a bus or on social media. Personally, it is absolutely brilliant. The best thing they are doing with the movie is the “touching yourself” campaign for men and women, where Deadpool instructs you to check yourself for lumps and bumps and not even in a way that makes you think it’s an awful attempt to promote the movie.
Do I need to give you a background of the character? Just watch this video.

With the upcoming movie Nat has tasked me with providing you all with a few possible gift ideas that I would personally like and for that person who loves a bit of Deadpool. You could gift these for someone for Valentine’s Day, or even just as a general pay day treat for yourself. The possibilities are endless! 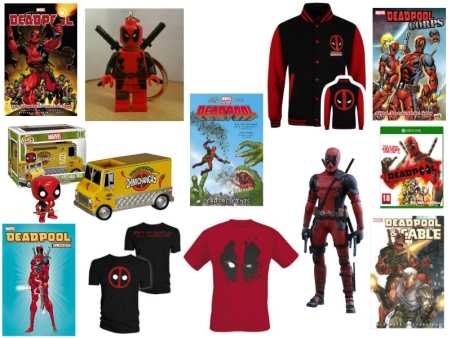 Well the best place to start for a comic book character is obviously the comics. You can start with the Deadpool Classics as I believe that’s where he is first introduced. I’ve never been a big fan of comics as I never liked the art style of the older comics. I started with the Deadpool Complete collections which are a bit newer and I think are the ones which really show Deadpool as we all know it. I also have the Deadpool kills series, Night of the Living Deadpool and Return of the Living Deadpool. All good stories in my opinion, I have found myself reading through the collections as soon as I buy them. I have just enjoyed them that much. The weird and sometimes hysterically dark adventures have kept me invested with this character and it just makes me that much more excited to see him portrayed on the silver screen. I would like the Cable and Deadpool series next (and eventually all Deadpool related media) but I think the next one I’m going to buy will be the next volume of the Complete Collection and Deadpool Vs. Thanos as starting a new series would just confuse my little brain.

Well who wouldn’t want this? Doesn’t it just look majestic? Yes it does, is exactly what your answer should be. Never mind the price, just means its proper quality. Am I right? 😀
For something a little more feasible and less stressful on the wallet. Imagine this bad boy sitting on your shelf/in your display cabinet. I want it. I want all the expensive figures at some point. Including the Star Wars Stormtrooper ones and there’s this Attack on Titan figure (link here) that would mortally wound my bank account. If you have the £300 to spare it would make an excellent addition to anyone’s collection.

This I could live with and not feel like my bank account hates me. I have said before in other posts my uneasiness with Pop! Vinyl figures but I think this one would be pretty cool to have. It has the figure with Deadpool’s Chimichanga Truck. What is not like about that?

For something to wear out there’s plenty of things out there, be it official or not there’s some decent quality stuff. Just Google “Deadpool clothing” and you will find an abundance of items but if you want to be saved that arduous journey of pressing Ctrl+T and typing that short sentence here’s a few items.

I love my varsity clothing, I have enough myself. My snowboard jacket is varsity, I have a Black Mesa (Half Life) varsity and a few other jackets to go along with them. For me the colour isn’t my thing as it’s too in your face but it still looks pretty cool. Natalee talked about this in her February wish list (link here) and I think she likes this item more so than me.

For something a bit more subtle you can go for these t-shirts. I can see myself wearing these to show my support for the ‘pool.

This one is quite the unique one. Nat actually bought us one each as a little Valentine’s Day present, and they are pretty darn awesome. Merging the Lego and Marvel universes even further by this unofficial Lego figure. I can’t really see Lego ever bringing out this character officially as he is known to be aimed at a more mature audience, then again he has had more toned down appearances in other media including Ultimate Spiderman. So there could be a chance, but in the mean time I am happy to settle with this. His swords even detach and can be held! Whoever made this is pretty skilled, mega props to them!

I know that when it was originally released it wasn’t the best game in the world and according to newer reviews it still isn’t. It has been released for newer consoles and includes some of the up-dates and DLC bundled with it. I have watched Lets Players run through this game and it looks entertaining but the game play just seems… Bleh. I am also conflicted by the way Deadpool is portrayed. From memory he’s a bit wackier than I would like. Which yes Deadpool is crazy and can be quirky, but he’s not THAT bad. The game seemed to remind me of the Animaniacs and I just think that’s a bit too much for his character. He has some dark moments in the comics; he’s desperate to die, he has an intimate relationship with the Marvel personification of death (who is female) and he just wants to be seen as a good guy really. I haven’t actually played the game (yet) so my re-view could be somewhat unfair and my assumptions and prejudices could be preventing me from being exposed to great Deadpool media. For what it is, a cash grab by Activision to jump on the movie hype, it is a tad expensive and I will be waiting for a price drop or sale to happen before genuinely going to buy it.

So there it is a few ideas for the Deadpool lovers out there. I know I will be getting a few of these.

Both Nat and I are excited to see the film in a few hours, are you? Have you seen anything here that you think you would like to buy for yourself, if not someone else? Have you got any awesome Deadpool items you want to share with us? Feel let us know, and feel free to comment below and tell us what you think! Ciao! 😀

Thanks again to Dane for being on my blog! I love when he writes for me, as like Deadpool he is just so wacky, and hilarious. 😛

We’re off to go watch Deadpool now anyhoo, I hope you are too!

Until next time all, take care.