I cannot believe we are now officially halfway through 2018. Where did May go?! I think most of it was spent enjoying the hot weather and having bank holidays to even realise it was going, going, gone!

Now it’s June and I REALLY struggled with my wish list this month. I’m so naughty, all the books I was lusting after and added to this list I have now bought as I really wanted them. Other than that it was so incredibly hard to try and come up with stuff to add to the list.

It’s mine and Dane’s fifth anniversary in a couple of days too so you’d think I’d post items that I’d be all, “YEAH I’D LOVE FOR DANE TO BUY ME THIS HINT HINT!” but I doubt that’s going to happen! 😛

URGH enough chitty chat, let’s get on with the wish list for this month. 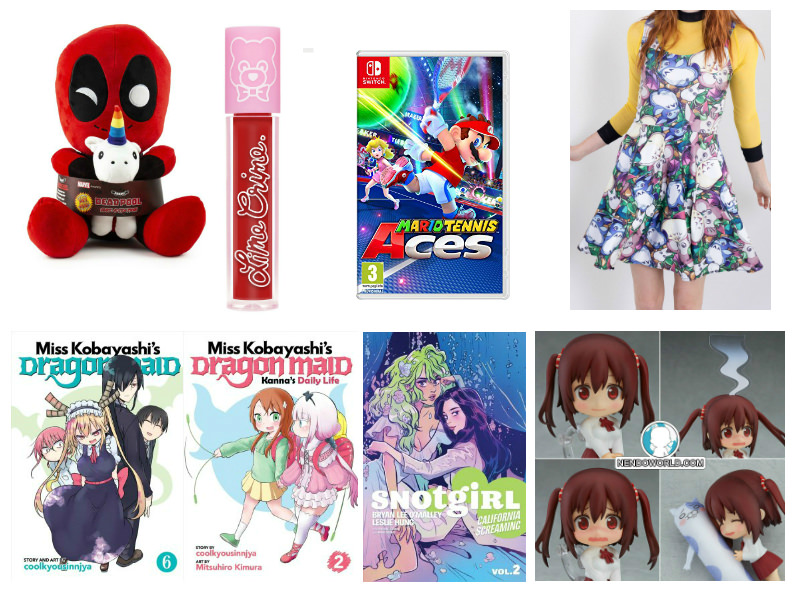 I haven’t actually bought myself any games for mine and Dane’s Nintendo Switch yet and we’ve owned it since March! I’ve had my eye on the new Mario tennis game since it was announced in March, not long before we’d bought our Switch funny enough. I’m a sucker for tennis games and for years have wanted the Mario tennis game on 3DS. This would be so much fun to play solo as well as with Dane! I’ll definitely be picking it up, especially from Smyths where you can save £5 off of your pre orders.

As regular readers of my blog will know, I’m loving the manga series of Miss Kobayashi’s Dragon Maid! I loved the anime, which was out last spring/summer so when I heard about the manga coming out in English, I picked it up to read. Since then, as soon as it comes out I order it! This has already been pre-ordered so I cannot wait for it to arrive now.

I’m a massive sucker for the dresses that the likes of Black Milk Clothing and Living Dead Clothing come out with, although I am yet to try the latter. I remember when Living Dead used to have their Studio Ghibli designs, but they didn’t stick around long. Recently I noticed two of the designs I wanted before were back AND they’re both in dresses, this one included. I really want to order it as a massive treat to myself, but for almost £50 before shipping, my soul is dying a little inside at the thought of it. I’ll see though if I fancy giving myself a massive fucking treat in the future.

This has already been ordered and I cannot wait for it to arrive! During my May Favourites I wrote about how I’d loved reading volume 1 of Snotgirl so as soon as the second comic book came out I KNEW I had to order it right away! I can’t wait for this to arrive now so I can read it sooner rather than later.

I don’t quite know how, but recently I stumbled across this plush online and holy fucking shit how cute is it?! This is a massive Deadpool plushie that is riding a unicorn, but the best bit is that it vibrates/rumbles when you hug it or clap at it. Why? Well, why not? 😛 I don’t need this, but I REALLY want it! It’d be so awesome to cuddle! This also comes in a smaller version too, which may be the better one to opt for. 😛

Since these were announced agggges ago I’ve wanted to try the Lime Crime plushies lipsticks, especially the shade Cherry Soda, but as of yet I just haven’t ordered it. There’s only one place that stocks this limited edition shade and that’s Cult Beauty. I do want to order it… BUT I don’t really wear lipstick anymore… 😦 I might treat myself to it soon enough though.

ANOTHER manga and it’s also another Miss Kobayashi one… It’s also one I’ve pre-ordered. 😛 The Kanna’s Daily Life series is adorable and I really do love being able to read more about the baby dragon of the family. This is only volume 2 and I cannot wait to read it, like I said I really do love this series.

This is the final item on this months wish list, purely because I want her so damn much and she’s now available to buy. Nana Ebina is from the anime Himouto! Umaru-Chan and is school friends with Umaru and in turn is my favourite, so when I saw they’d announced a Nendoroid for her I was so excited! She’s an anxious character in many ways but she’s so sweet and adorable. I didn’t realise she came with the blue and white cuddle pillow cat from the show either but apparently she does! I’m hoping deep down that for our anniversary Dane has bought me Nana Ebina… I’ll report after our anniversary! 😉

So that was my wish list for June! I’m sorry it wasn’t anything too exciting, I’m rather boring lately when it comes to buying things. 😛

What’s on your wish lists for June? Make sure to let me know in the comments down below.

Until next time, I hope you’ve had an amazing weekend!