Guys we are officially into 2020 now and I can’t believe it’s already February! January flew by for me due to being in Japan for 2 weeks but even so, still can’t believe how quick the month went by!

January’s favourites are going to be a bit odd due to being away in Japan, but at the same time they’re going to be good, I know they are! I’m not changing how I write my favourites at all. I’ll still be sharing 5 beauty related products I have been loving as well as my favourite TV show(s), movie(s), book(s), music and game(s). 🙂

I hope the start of 2020 has been great for you guys, my readers and I hope it hasn’t been rough at all.

On with the favourites! 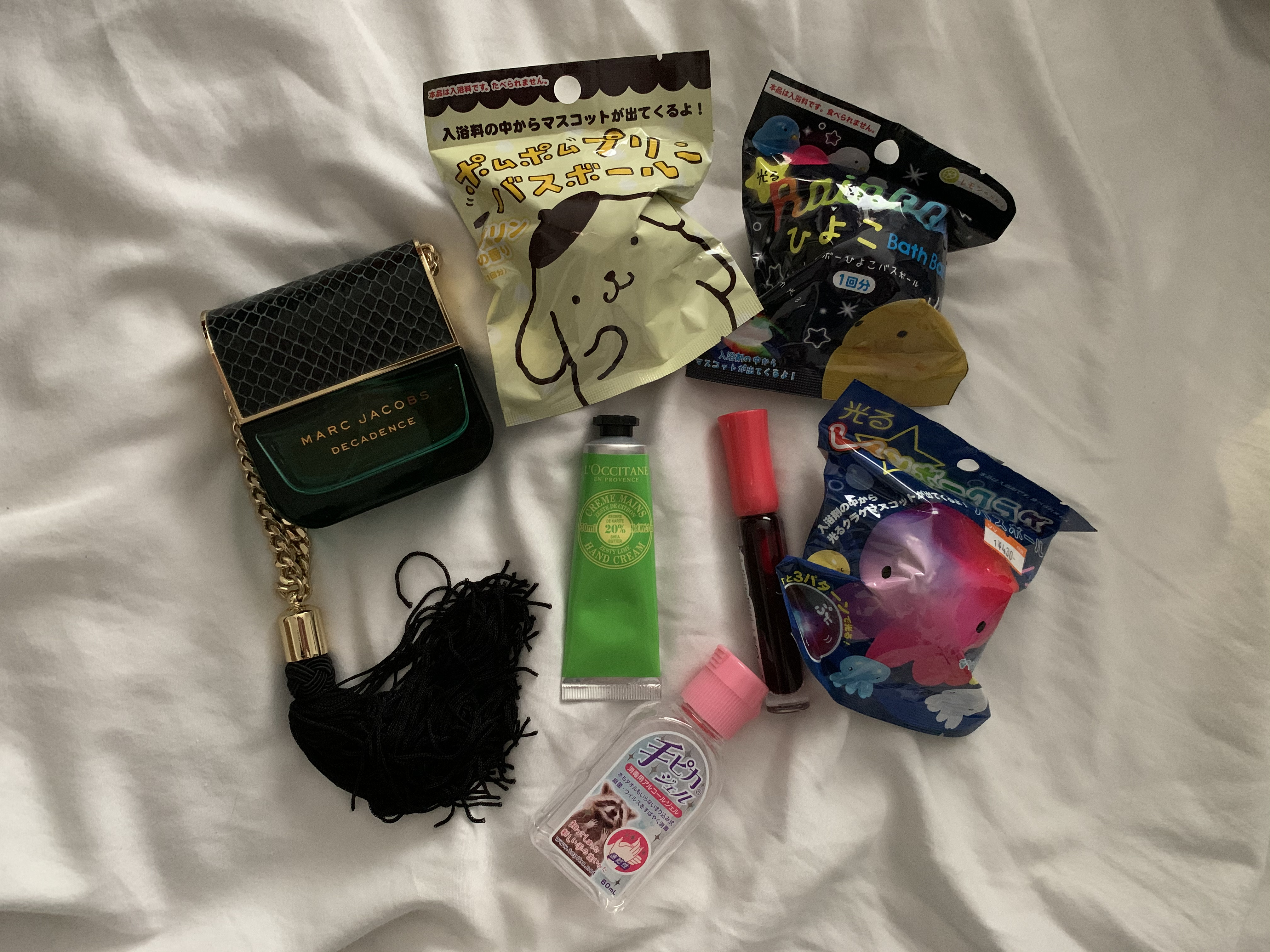 Whilst I was in Japan I used quite a few of the character bath bombs they had for sale in the shops. They didn’t cost much (Between £2-£4 depending on the character and store) and were really nice to have handy in the hotel room if we’d had a long day of walking and needed a soak. Dane actually used and had more baths than me, which was a massive shock! We’ve brought loads of these back to the UK with us, as we loved them so much. They often come with the characters inside that is on the cover. For example I picked up a shiba dog bath bomb and hence got a little white shiba dog inside, so cute! These weren’t bad for the price and one bath bomb was definitely enough to feel pampered. I felt soft and smooth after using one of these in the bath. I honestly recommend them if you’re in Japan! I feel like they’re better than Lush to be honest with you… 😉

I bought this lip tint whilst I was out in Japan and I honestly regret not buying more! It’s a gorgeous dark red shade I have had my eye on for years! It wasn’t expensive either, which was even better. Aside from my Laneige lip bar, this lip tint (review here) was my go to lip product the duration of my holiday! It’s really easy to apply and a little bit of this product goes a long way. I mostly like to use it to give a bitten look to my lips, which wasn’t easy to do with this lip tint at first, but the more I have done it, the easier it has gotten. I will be writing a review on this lip tint, as it’s too good not to share on my blog!

I haven’t used this hand cream for quite some time, which is mostly down to using up other hand creams first! This is a gorgeous thick hand cream that smells of limes, yummy!  I remember stocking up on loads of these during my MA in 2015 so I have a lot to use up! I decided to take one with me to Japan to use during the day and it really was a treat to use in the mornings before we ventured out for the day, as well as whilst we were out and about. I’ve stopped using it since we got home, but this really did help my hands when they were feeling dry and sore. I was recently diagnosed with having a form of dermatitis on my hand, which kept flaring up during the trip. This hand cream really did help it on bad days, alongside my dermatitis creams.

I know this is a strange one to add this month to my favourites but I just need to mention it for so many reasons! First of all look at the packaging… It has a cute little happy raccoon on it! Due to this me and Dane called this the “happy raccoon” whenever we wanted to use it. Aside from the cute raccoon on the front, this was also really good because it didn’t smell overly alcoholic, was gentle on my eczema skin and the packaging was handy for how you get the product out… I feel like that last part didn’t make sense! Either way this stuff is amazing and I honestly need to try and figure out a way to ship some over to the UK!!!

This is a perfume I keep reaching for at the moment and it’s the one I took with me to Japan too. The scent is perfect for any time of year and any occasion. My brother bought it for me quite a while ago now and it was so funny how this perfume came to be my gift. Just before Christmas in 2015 I went to Fuerteventura with my dad for a few weeks. This perfume was quite new so I decided to give it a try and see what I thought of it. I loved it and was close to buying it… But instead me and my dad went to a bar for some drinks. Just as we sat down with drinks my brother called my dad and said, “I’ve given mom Nat’s Christmas present.” Fast forward to Christmas Day… My brother bought me Decadence… Which I had nearly bought! How crazy is that?! So yeah, this is one of my favourite perfumes and I always wear it when I fancy something unique and different. I also love the bottle is comes in, which is in the shape of a handbag, strap included… 😛

I actually watched this documentary towards the end of December but thought it was worth a mention as I really enjoyed watching it. What you think is a documentary about a cat killer, actually turns out to be a human murder. I remember Dane telling me about the murder not long after we got together, so when we discovered what the documentary was about, we were even more interested whilst watching it! This documentary is very triggering in various ways and upsetting due to that. I love watching stuff like this, so I really enjoyed it. Definitely go and watch on Netflix if you can!

Favourite Movie – Once Upon a Time in Hollywood.

I watched this film on the flight home from Japan and it was really good! I don’t recall if me and Dane wanted to go and watch it in the cinema when it came out here, but either way we got to both watch it for free! It’s about an actor and his stuntman, as well as some other characters throughout. It’s all based around true events, as well as fictional characters. Whilst it’s a great film, I did start to wonder halfway through, “Where’s this going? What’s the point?”. This was quickly answered however, in such an amazing way! I honestly recommend you watch this film if you get the chance to! It’s not the best from Quentin Tarantino, but it’s still decent. 🙂

I didn’t read anything as I was on holiday… This was not a holiday where I could lounge around and read… I swear I am going to start reading more now I’m back from Japan. I have so much manga to catch up on. I need to make a monthly list of which series/volumes I plan to read!!!

Favourite Album – My Chemical Romance – “Welcome to the Black Parade”.

With the announcement of My Chemical Romance coming to the UK for 3 dates in June, I have been listening to them loads both during my time in Japan as well as when I got back home. I tried to order tickets to the first 2 shows My Chemical Romance announced, but was unsuccessful, which sucked. I was definitely in a sulk about this… UNTIL my friend Claire brought it to my attention that they had announced a third show! I managed to get tickets which I was SO HAPPY ABOUT!!! That day I did nothing but listen to My Chemical Romance during my shift at work. It was bliss and I loved every moment of it. 😛 I’m so excited for June now, I’ll be going with Dane too and it’ll also be the third time seeing them live… YAY! I know this game is only a demo at the moment but I have been LOVING it so much! I played both of the original Mysery Dungeon games this one is based off of and I was beyond excited to give the demo at go. I played a little of it on my way to Japan on the plane, but I played more of it on my way home whilst we waited to board out flight, as well as on the plane. It looks amazing and plays really well. I’ve already pre ordered the game and cannot wait for it to arrive! I’m going to finally be kept busy on my Switch again in March and I am beyond excited for that!

So my first favourites post of 2020 is complete! I cannot believe it is already the start of February. Can you guys believe how quickly 2020 is going by already?!

How was the first month of 2020 for you guys? Make sure to let me know in the comments down below, as well as what your favourites were this month!

Until next time all, take care and have an amazing weekend. 🙂