I wanted to originally have this January wish list as a birthday wish list, but alas it wasn’t put up quick enough and to be honest I didn’t have a clue what to put on this list that I hadn’t put on my December 2017 wish list (which you can read here).

This list isn’t anything special this month as I’ve just had my Christmas AND birthday presents so a lot of gifts I received would have been items I’d have added to my list. FYI I will be doing a post about what I got for my birthday as soon as I can!

Anyway, I hope you enjoy this wish list, I’m sorry it’s nothing special this month. 😛 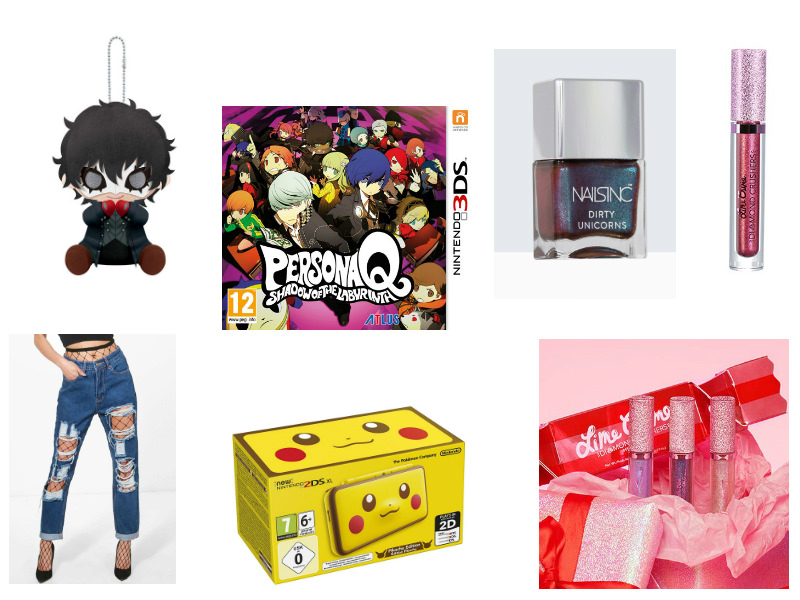 I’ve always been iffy about trying Lime Crime products due to all the bad talk about them in the past but I can’t deny that I really love the look of their Diamond Crushers and as you may be able to tell on my list above, I have another bunch of these to talk about at some point too! If there is one product I would like to give a go it’s definitely these. Heirloom is a pinky red glitter that you apply to either bare lips for build able colour, or over lipstick to give a 3D effect. Seriously need some of these in my life!

I heard about this 3DS Persona game a while ago and at one point I even found it in CEX for the shocking price of £45.00! I don’t mind paying the cheaper price on the Nintendo eShop to be honest. I’ve heard some good things about the Persona Q game and it’s definitely something I’d like to pick up as soon as possible whilst it’s at a decent price! I’m getting through the Persona games so quickly now that I just want to keep playing them. 😛

I know I don’t need a new 2DS… Mine works fine and even so I don’t play it as much as I used to. BUT how cute is this bloody Pikachu 2DS XL?! I missed out on the Pikachu 3DS and was absolutely gutted, but I’m all for the 2DS over the 3DS anyway due to the 3D hurting my eyes. I’m going to keep my options open with this as I would love to get it at some point but at the same time this isn’t the cheapest item in the world and I really want to save my money if I can. This is a wish list however, so I can lust after it all I want! 😛

Since starting to work in an office I have rekindled my love of wearing nail polish! I love changing my nail colour up twice a week and especially when I have sparkly polish on, it just brightens my day a little bit. I really would like to get some new nail polish though as well, now I can! My favourite polish to wear at the moment is the unicorn ones by Nails Inc so when I found out they had the Dirty Unicorn shades out I had a good look at them. There are four altogether but Shake That Tail is my favourite! It’s a colour shifting polish and is described as, “Shake That Tail is a rainbow at twilight – a multi-flip spectrum of shades ranging from pink to blue to gold.” which is why I really like it!

When I was in Fuerteventura I saw a lot of jeans with this style and I really like the look of them to be honest! I haven’t really seen much like that over here in the UK but when I’ve had a search around the internet I have come across some pairs of jeans similar. The only ones I have really found that are decent are these mom jeans from Boohoo. I’m not a massive mom jean fan but I’d love some new jeans soon so these are more of a “target” of what I want to get for when the summer is here!

This is something I REALLY want and have done since before Christmas. I’m a massive Persona 5 fan and when I saw that these had been announced I got really excited and went to order, but when I saw the price as well as the size of the plush itself, I let out a massive sigh. I can’t really part with that sort of money for something so small! Maybe £15.00 due to it coming from Japan, but not £25.00! That’s crazy! Look at how cute he is though! Fuck he’s melting my heart so badly. 😦

This is the other Lime Crime item I was talking about earlier and is the one I want the most out of the two, as let’s face it you get 3 mini Diamond Crushers for the price of one full size. That’s not bad if you just want to try out some of the shades and the formula of the product. In the unicorn box you get Unicorn (lavender/rainbow sparkle), Unicorn Queen (electric violet) and Black Unicorn (black rainbow). I would love to order these right now but I just can’t… I need to watch my monies right now until I get paid next. 😦

So that is my January wish list and the first one of 2018! How exciting, eh?

What items do you have on your wish lists? Make sure to let me know in the comments down below!