It’s almost been nearly a year since I last wrote a Lush review on my blog and I’m not in the slightest bit surprised (FYI it was this post). After Lush declared they would no longer hold their Boxing Day sales online I was a bit (very) pissed off. Not just for myself, but for people out there who can’t make it to the stores to grab themselves some bargains. It sucked and it was more than just that that annoyed me. Their scents are all the same lately (Le sigh – citrus) and the way their company has been lately it just put me off supporting them anymore.

On top of all that I just haven’t really been bathing as much as I used to. I think in my old job when I finished work at 1.30pm I’d come home and had a hot bath to relax myself after a shit morning at work. Now I get home around 5.30pm and cook dinner, chilling out and then sleep. 😛 Baths just aren’t fitted into my chilling out time lately due to a mixture of that time being taken up with playing games or blog writing.

However, since going to London in November that’s kind of changed. I went into the Oxford Street Lush and picked up some of the Christmas range for 2018. I LOVE some of the bits I picked up, but as of yet I haven’t actually used them… Oh dear.

I forgot to check out and pick one item up though that I was interested in, which I was gutted about. I don’t really go into Lush anymore as Dane doesn’t particularly like it and none of my friends are really arsed by it either. When me and Dane went Christmas shopping at the start of December he wanted to pop into Lush to look for some present ideas for people and I decided to pick up that one item I wanted to try!

I didn’t get chance to have a smell of it as the store was HEAVING! It wasn’t good really. The Birmingham store has now moved to a much bigger store (which is apparently bigger than Oxford Street!) so when we went shopping it was their tiny store. I just feel like the staff should have had a queuing system for the store as it was crazy packed. There were also members of staff standing around talking and to be honest, getting in the way of customers trying to look at items. I ended up barging past them all after saying excuse me so many times. We wanted to grab our items and get out of there. 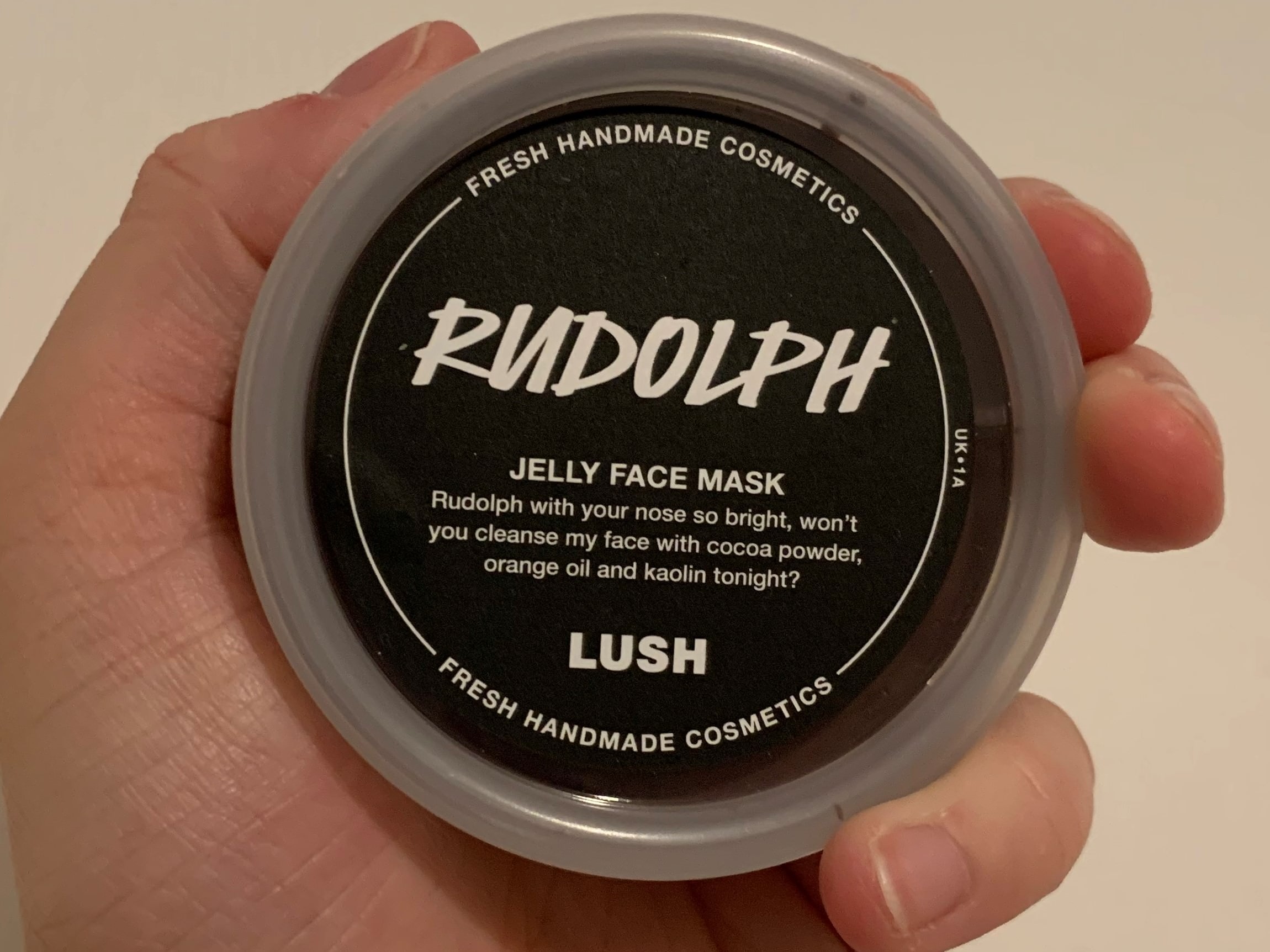 The item I picked up, as you’ll see from the title is the Rudolph Jelly Face Mask, which I was inspired by Steffie over at My Lush and Stuff to pick up this jelly face mask as she made it sound so amazing! I may have gone off of Lush, but I’m all for a face mask that will do my skin wonders, whilst smelling amazing! 😛

Rudolph is a limited edition jelly face mask for Christmas and I already want it to stay around forever, I know I’m not the only one who feels this way. 😛

Although I’ve only owned it for a couple of weeks I’ve found that this face mask really has helped me after use and I KNEW I just had to write a review for it on my blog, especially with Christmas right around the corner. 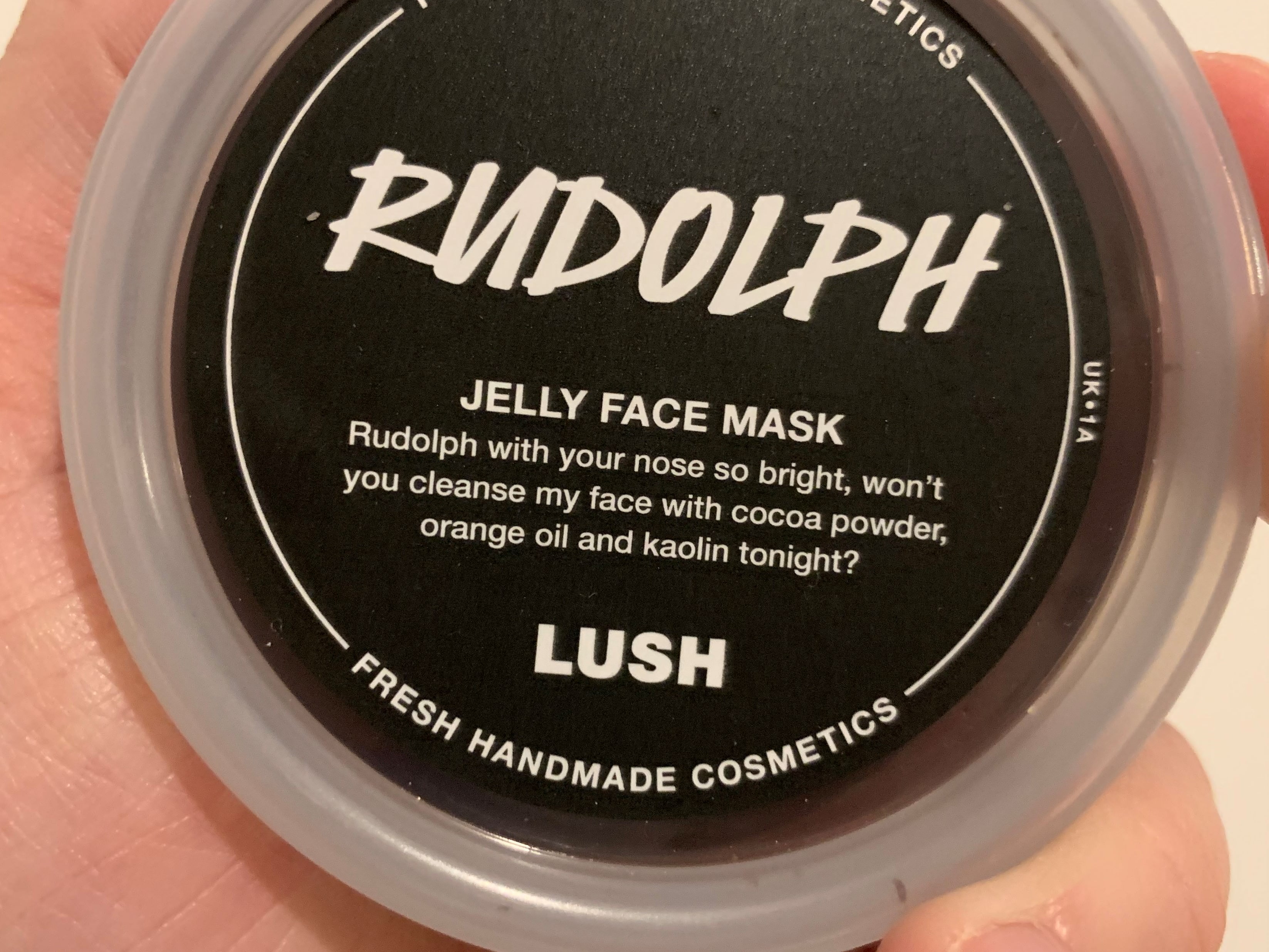 As you can see from the image above it’s described as, “Rudolph with your nose so bright, won’t you cleanse my face with cocoa powder, orange oil and kaolin tonight?”

Oh the cringe, gold stars to whoever wrote it. 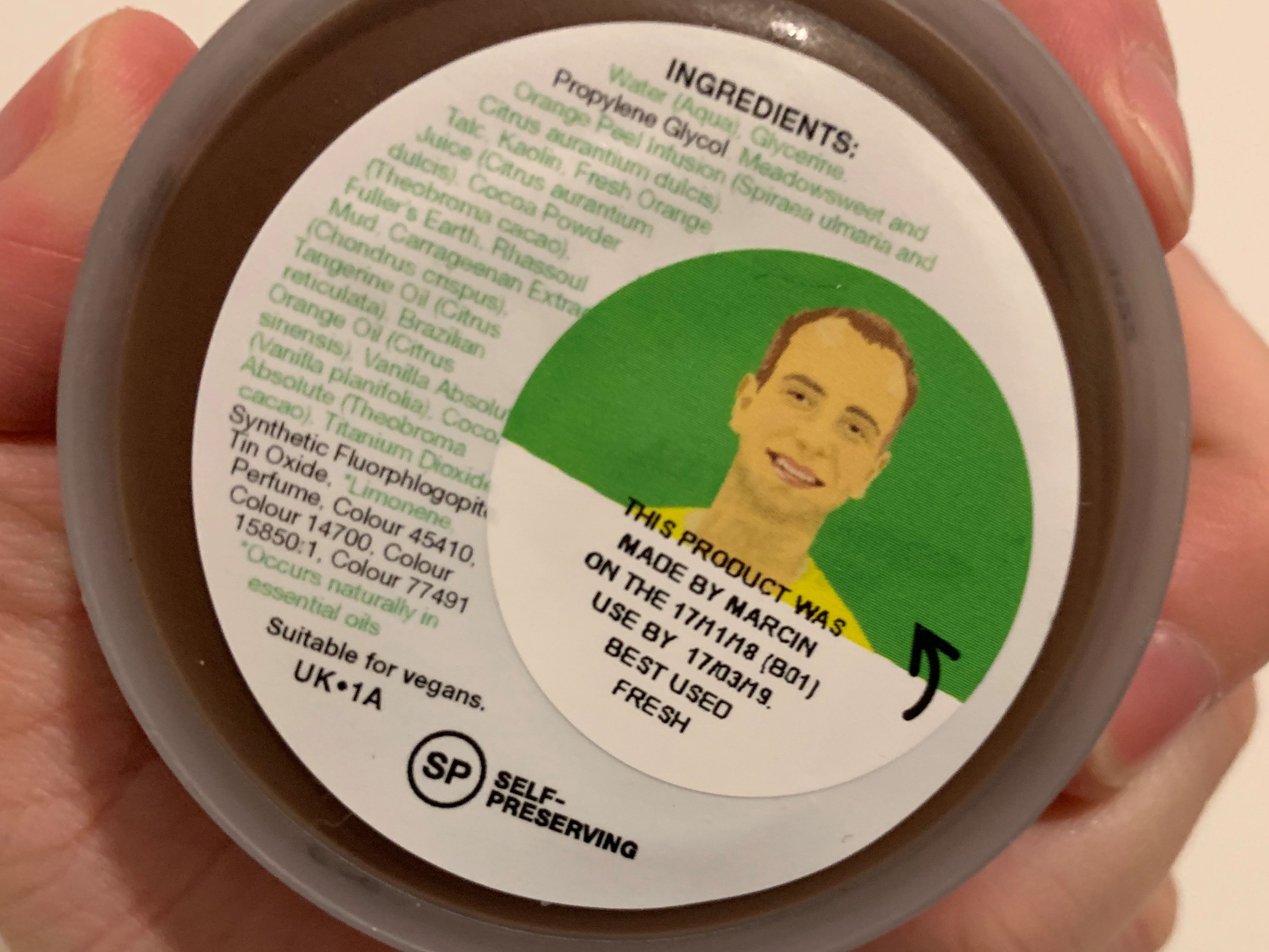 The jelly face masks come in smaller tubs than the fresh face masks do. They come in 65g tubs and costs £7.95, which to me isn’t cheap to be perfectly honest with you. This being said they’re not like the fresh face masks where you need to use them sooner rather than later and also need to keep them in the fridge. The jelly face masks don’t need to be kept in the fridge and have a long shelf life. The one I picked up has a 4 month shelf life on it, which is amazing! 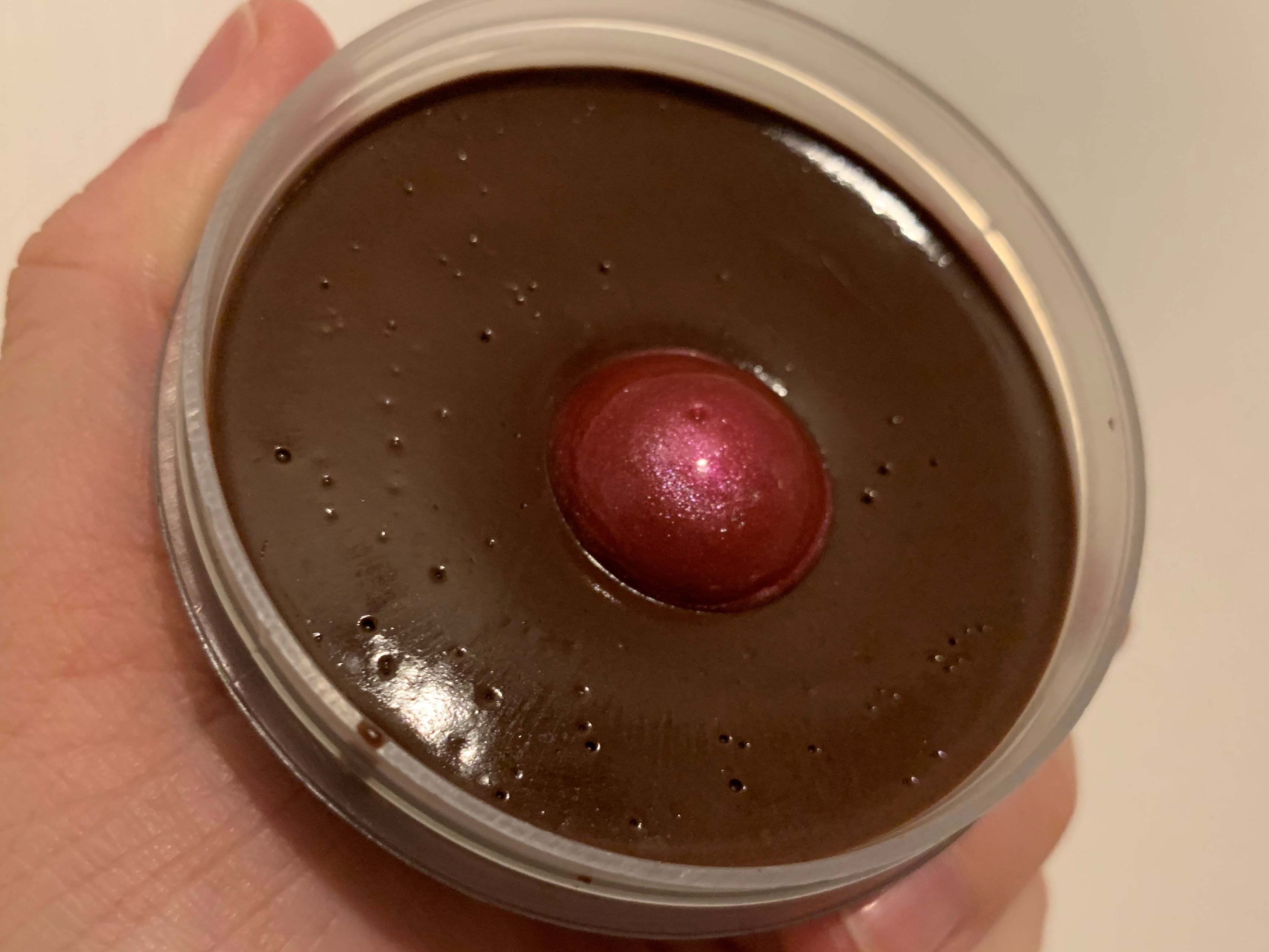 The product itself reminds me of a chocolate mousse in both sight and scent! It smells so chocolately that I’m surprised I haven’t read of someone trying to eat it yet! It smells more rich chocolate scent, but due to the fact it contains orange oil you can get a hint of that. Either way it smells amazing! Of course the colour of this product is brown. 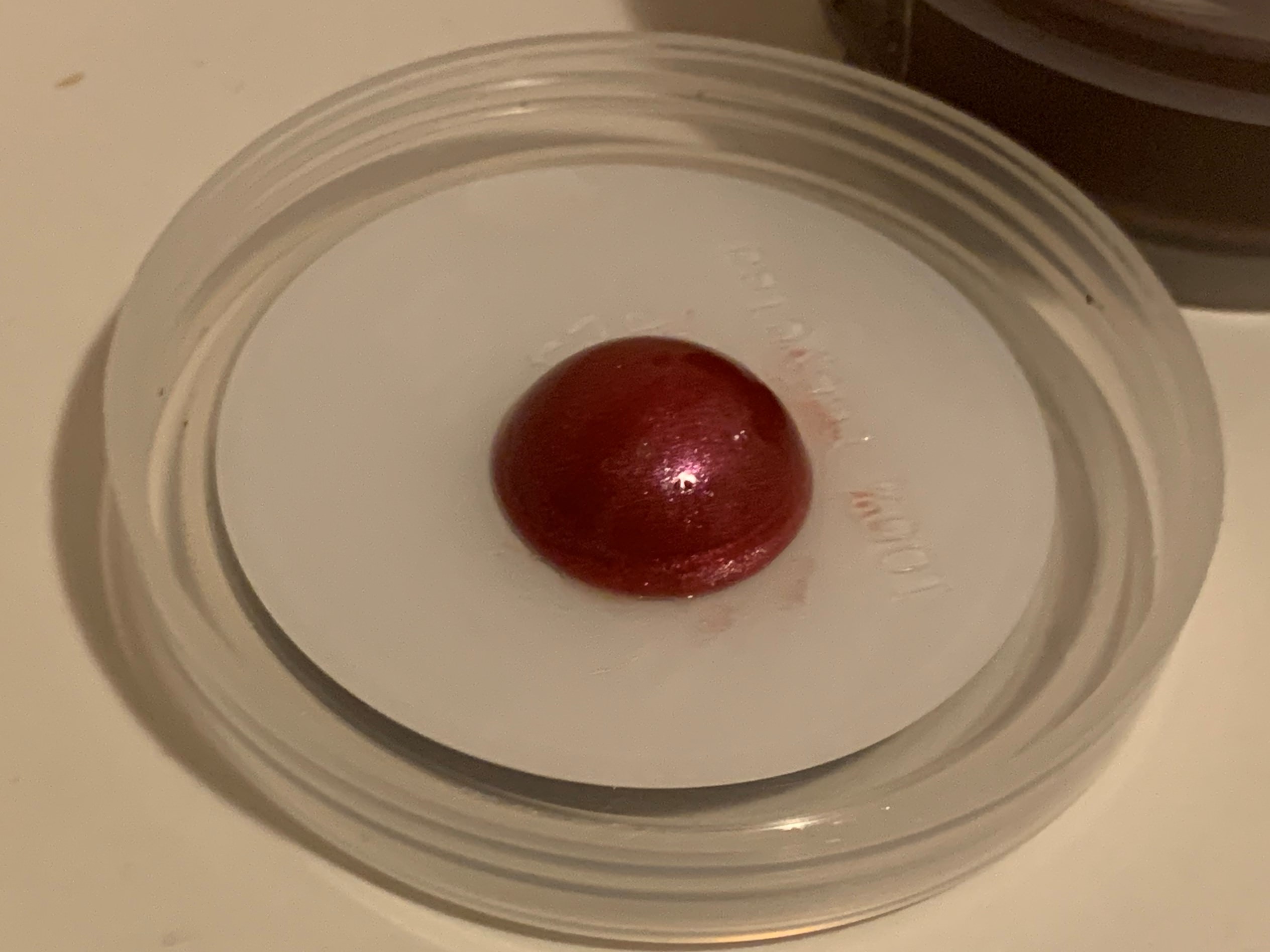 The look of the mask is clearly a jelly and when you push down on it it springs back. It reminds me of blancmange. In the middle is a cute little red shimmer piece of jelly, which is suppose to be Rudolph’s nose! I know you’re meant to pop it onto your nose to look like Rudolph yourself, but honestly I do not have a clue what else to do with it! 😛

This mask is said to be good for people with oily skin and also dry skin, so this sounds like it’d be perfect for combination skin to be honest. I haven’t been able to really find anywhere so I can go only go by the ingredients what this jelly face mask will do to your skin!

Kaolin clay is great for absorbing excess oils on the skin and also cleans out the pores and cocoa powder helps to soothe and moisturise the skin. This to me states how it is perfect for combination skin, which is my skin type. This would make a great gift for a teenager as obviously it smells amazing and will help them with their troubled teenage skin.

This is my first time trying a jelly face mask and it was definitely a bizarre and odd experience the first time I tried it. I wasn’t quite sure HOW to use it, well I did as I’d seen YouTube videos in the past, but I mean in the sense of how much I needed to use. I popped into a Lush store recently and noticed for their samples and DIY jelly face masks they’d cut the mask up into chunks inside the tub, which I think is a great idea! I wish I’d thought to do that before I’d started using it. 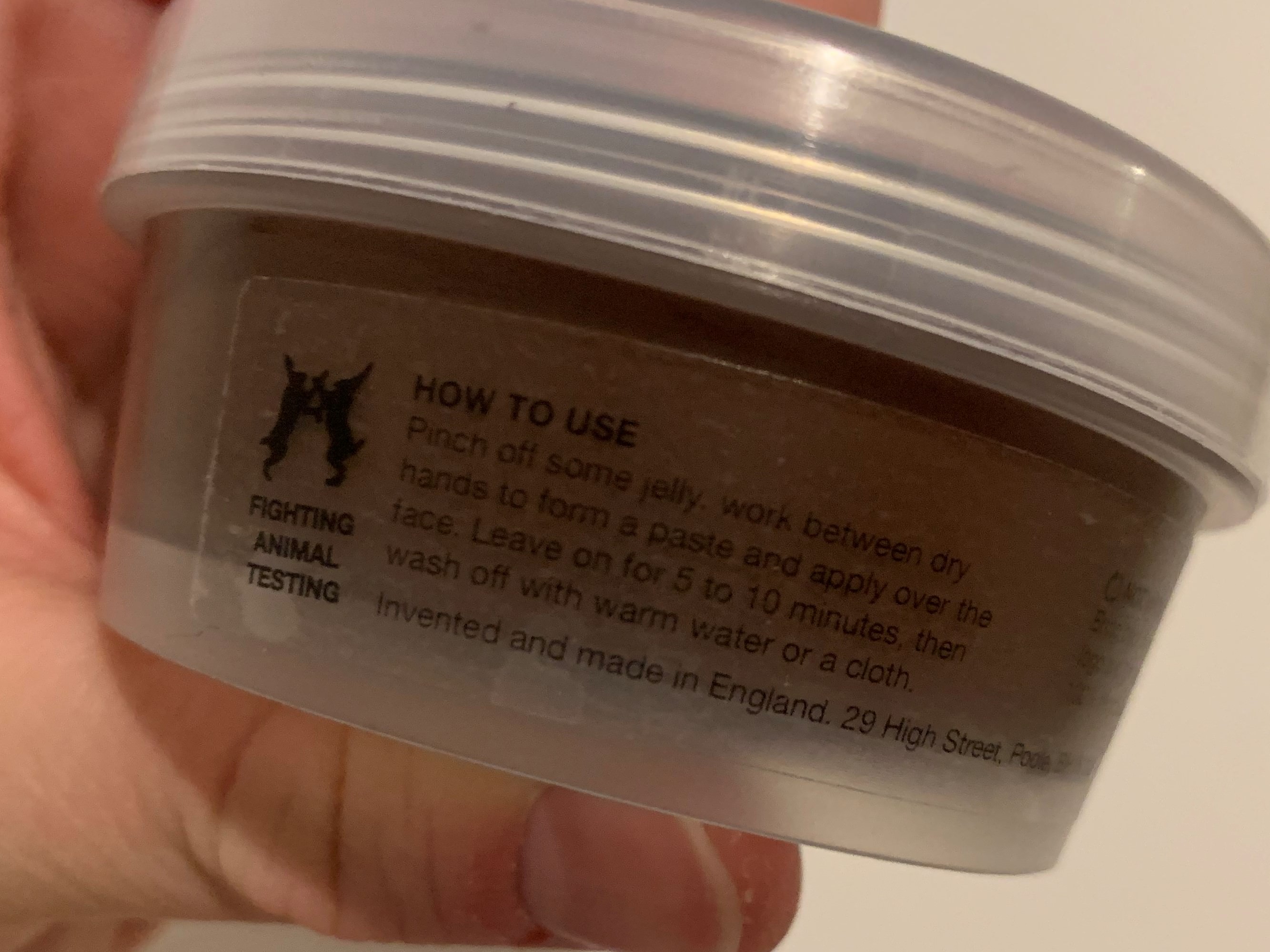 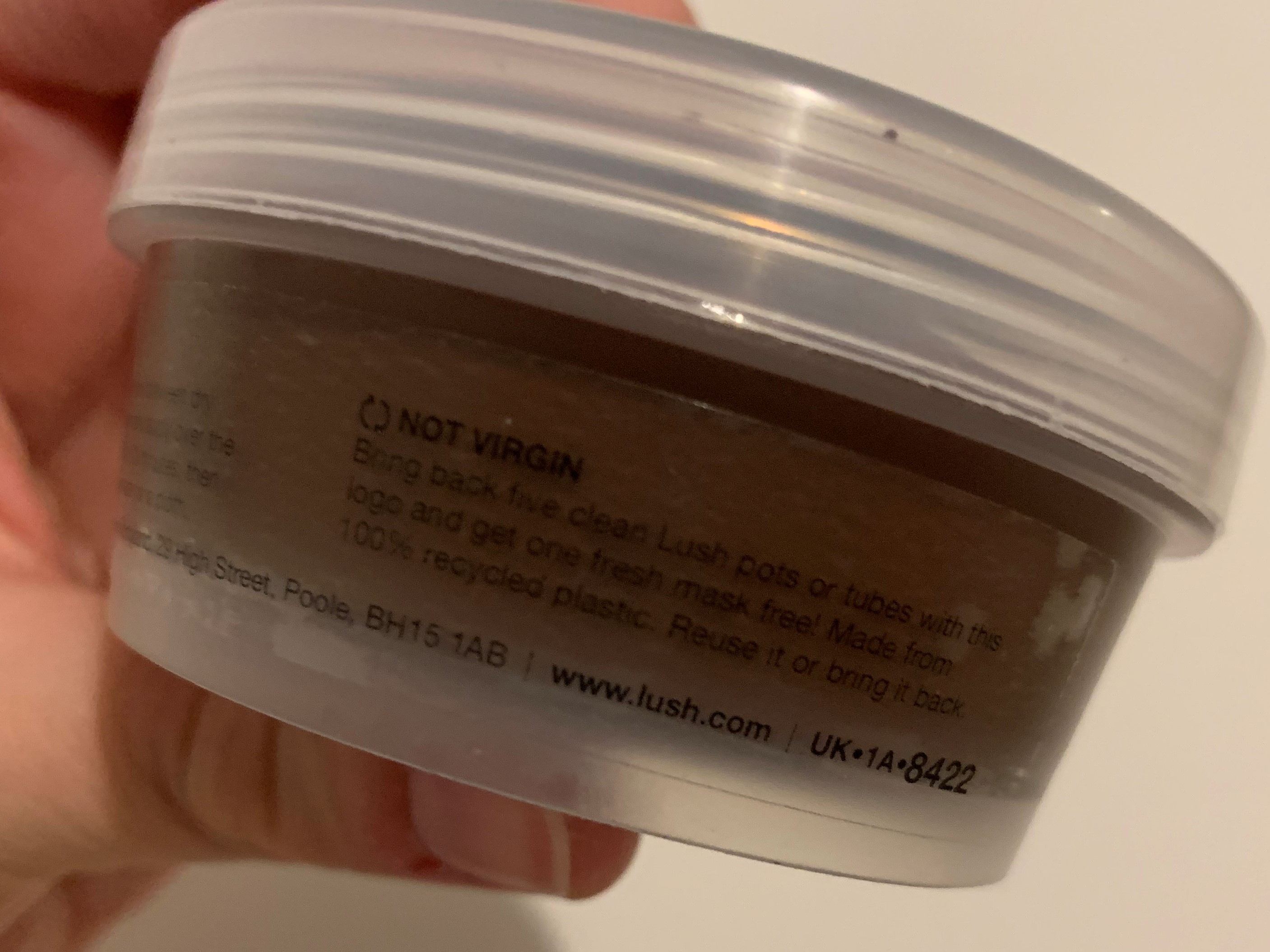 The one thing I really hate about the packaging for this face mask is the stickers around the packaging. You can read any of the writing! Why would you put black text against dark brown? Surely you would change to white writing so we can read the instructions and such properly? Alas this isn’t the case and whenever I want to read the side of the pot I have to get the torch on my phone. 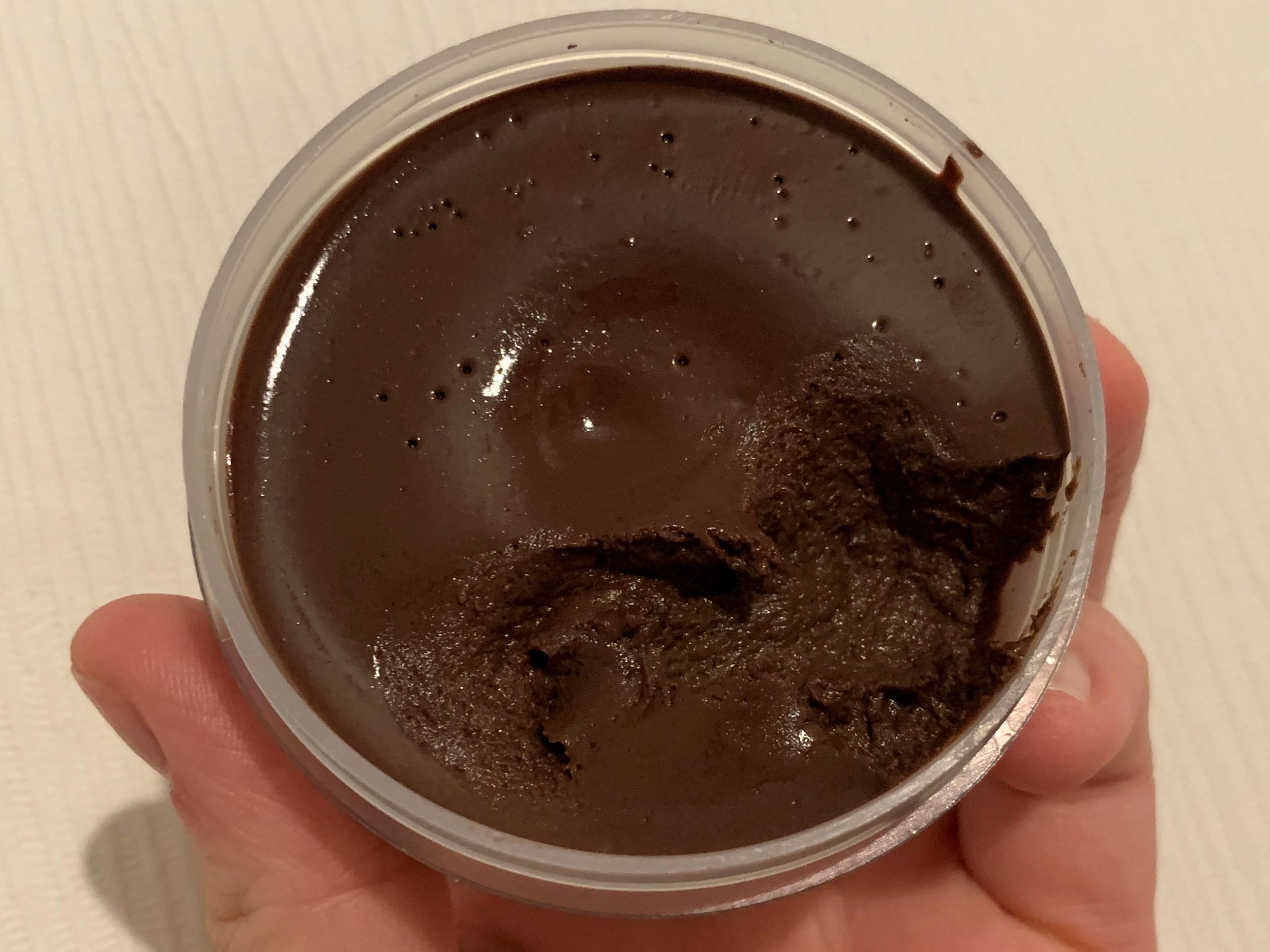 How the jelly face masks work is you grab some of the mask out of the tub and with dry hands rub the jelly between your hands to create a paste. Apply to your face and leave for 5 to 10 minutes and rinse off with warm water or a cloth. 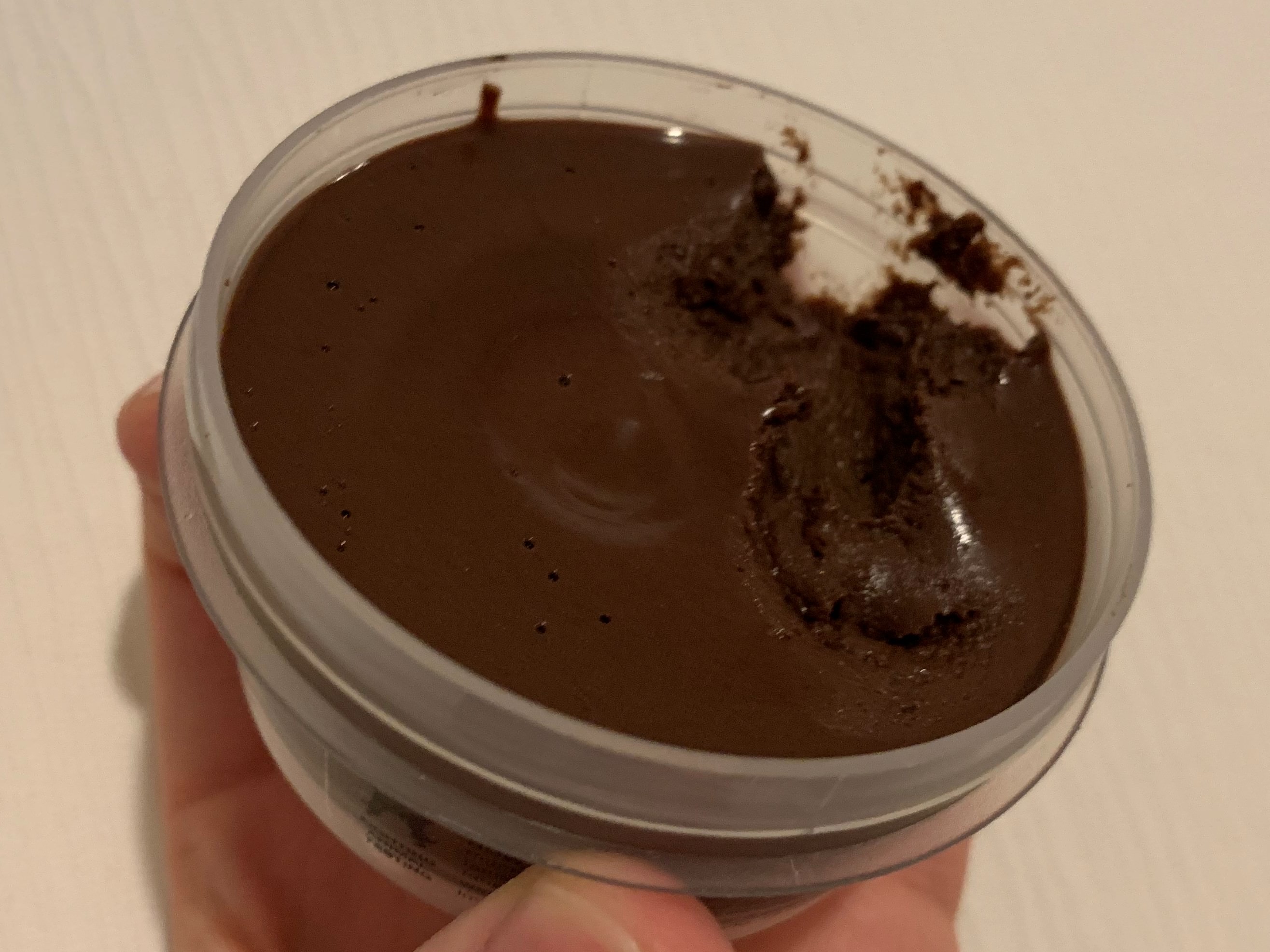 I don’t know if the first few times I used this I just didn’t use enough or what, but it’s such an odd product to work with, but not in a negative way. I grabbed (what I thought) was a big enough chunk to cover my whole face, rubbed it between my hands to make a paste and applied it to my face. The more I applied it onto my face and massaged it into the skin the more it seemed to move around and build up into jelly chunks, instead of smoothing my face evenly. It’s rather odd and I don’t know if I like it.

I gave up moving it around my face after a while and just settled with it on my skin. I love to use face masks in the bath 9 times out of 10 as it’s so much easier to rinse them off than it is in the sink. The shower is great too, but having a soak in the bath with a face mask on is definitely relaxing. 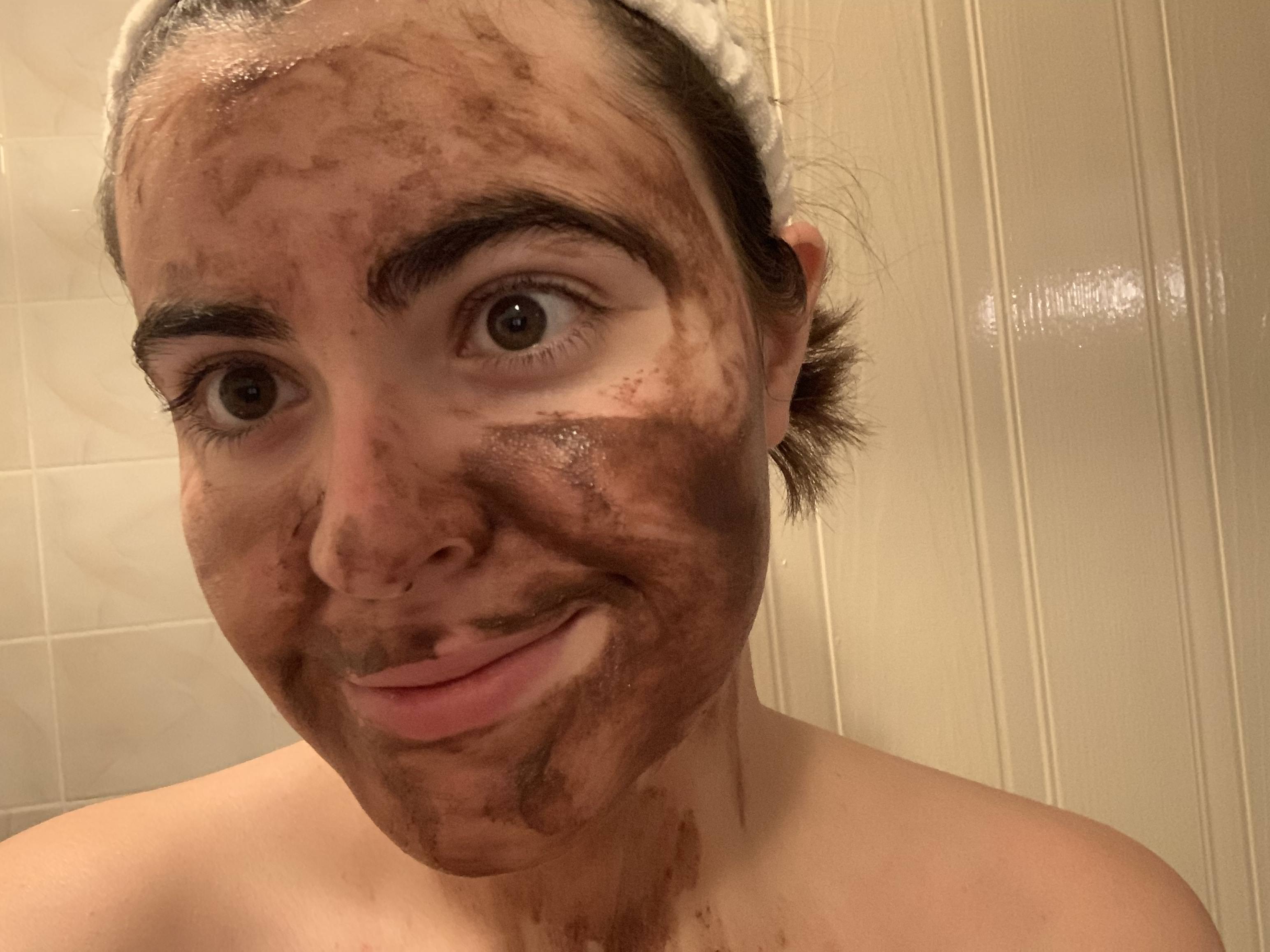 I thought it would be hard to wash off due to the jelly but it’s actually pretty straight forward and after going over with a flannel, the mask is off and my skin feels baby soft to the touch!

I apply some moisturiser after I get out of the bath just to make sure my face is as soft as it can be!

I do rather like this jelly face mask and would like to try the other ones in the future, but at the same time the others don’t really appeal to me all that much. This one is amazing and I wish Lush would make it permanent as it reminds me of the Cupcake face mask and I CANT STAND IT! The one time I used it it caused me to break out really badly. 😦

Don’t forget this is a Christmas limited edition product so it’ll only be available until (probably) Christmas Eve and then it will be gone!