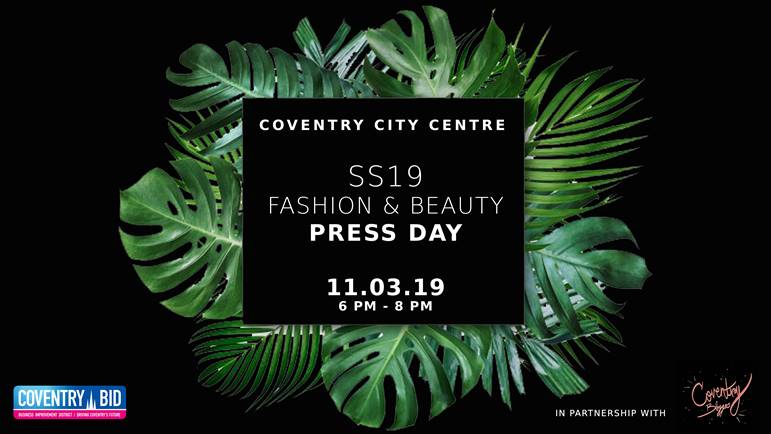 Almost a month ago I got the chance to go to the SS19 Fashion & Beauty Press Day in Coventry and it was so much fun! I’d booked the day of work especially for the event, which in turn was also the day I found out I’d been offered my new job! Definitely a day for celebrating!

The event was organised by Coventry Bid, who partnered up with Emily who runs Coventry Bloggers (and also her blog The Emily Chapters).

Me and Amy (Writing into the Ether) decided to meet up before the event to go for something to eat and then head to the event together. It was a lovely early afternoon eating Japanese food together and talking about all sorts, from her weekend down in Brighton, to working together on blog posts.

We ventured over to the event and it was much bigger than I thought it was going to be! I’ve only attended one fashion style event before, which in turn was the first blog event I ever went to and by far one of the worst! We won’t go into that though now… 😛

The event was held in The Old Grammar School, a gorgeous church like building that was the perfect location for this event and as you walked in the main section was filled with various high street fashion retailers, some recognisable and some not.

As well as fashion there was a small beauty section located in one of the rooms, which was great but to be honest too small for how many people were at the event. This being said it was amazing for networking! I saw some old and new faces and spoke to loads of bloggers, which was lovely.

We were given a drink upon arrival and after a little introduction to the evening and what it entailed, we were let free to venture around and look at all the clothes coming out for spring and summer 2019!

There were various people there including Milk Vintage Clothing, Marks & Spencer, Topshop, Yours Clothing, Debenhams and more.

I was really disappointed that I never got to have a look at Topshop and what they had on offer. They left early due to a launch/sale the next day. I did go over to the stand to look at what was on offer, but everyone was swarming the area so I couldn’t really get a chance to look, which was a shame.

I have to be honest and say my two favourite stands were Marks & Spencer and Yours Clothing. Now I’m not a plus size lady but I LOVED all the styles that Yours Clothing had on offer for plus size ladies. It’s great that they make fashionable pieces that are up to date with the catwalks but they don’t charge loads for pieces because “they have to use extra fabric”. This is an excuse that most stores out there use and it pisses me off. It’s just bogus and I don’t agree with it at all.

Marks & Spencer were amazing and they were by far my favourite. I actually used to work there for a couple of years and I was always so frustrated at the clothes range and how they’re aimed at older women. They’ve taken a lot on inspiration from massive brands, the one that stands out the most being Chanel. They had some gorgeous pieces that really stood out alongside the other stands in my opinion.

They had a mannequin that was dressed perfect for the office, or an evening out with friends or a partner.They also had a gorgeous tea dress that would be lovely to wear during the later spring months when the weather is starting to get warmer, as well as summer when the weather is gorgeous and an evening in a beer garden is a must!

The piece I loved the most on their stand is their leather slingback shoes which shout Chanel! They had the nude pair on show and I would love to pick them up for work now. They’d look perfect with the tea dress I mentioned and a nice black or navy blazer.

Finally another stand that kept drawing me back to it time and time again was Milk Vintage Coventry. When I was in my early 20’s I was obsessed with vintage clothes and was always down at Cow Vintage in Digbeth. These days that isn’t so much the case, but I do rather like to flick through vintage finds as and when I get the chance to.

I loved the variety of vintage pieces they had on show, but I particularly loved a tartan skirt they had on show! I love wearing tartan trousers (in various colours… Not just the standard red!) which I thought this was when I first saw it. Everyone was commenting on this piece though and I think if these had been on sale at the event, it would have been snapped up straight away! A geeky black tee or a band shirt and some Vans trainers or Converse would look amazing with this in the summer!

Me and Amy ended up going our seperate ways on and off during the event but I walked around with Gemma (Just Gem) who is such a sweetie! I love her so much and she always makes me giggle when I’m in her company. 🙂

However before I lost Amy, we had a good nose around the beauty section and I watched Amy get her makeup down by the gorgeous girls at Benefit. She looks beautiful in the photos I took of her! 😀

I would have had my makeup done by Benefit, but as my readers know, I’m not a makeup wearer. They made all the girls look stunning (even though they did previously!) and gave them a bit of colour with their Cheekleaders Mini Bronze and Mini Pink palettes!

Me and Gemma ventured over to the Clarins section of the room, where they were talking about some of their new skincare, which we also got to take home samples of! I still need to give them a go, I’m really excited for them. 😛

Sadly I can’t remember names, but the woman at Clarins was so thorough about everything and the even tried both of the products on the back of mine and Gemma’s hands. 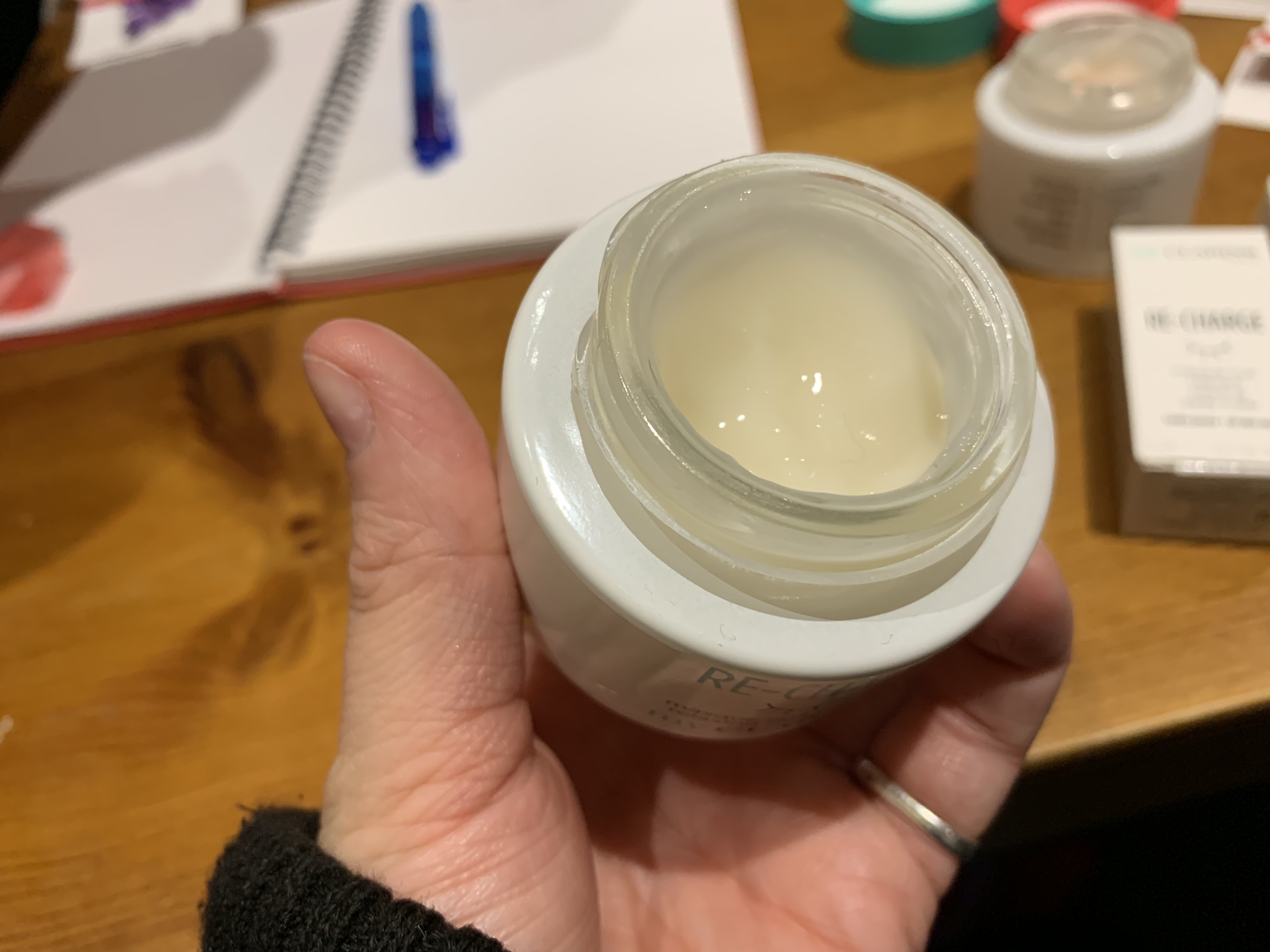 We got to try the Re-Boost day cream and the Re-Charge sleep mask. They both feel really refreshing and hydrating on the skin and as I said previously, I’ve got some samples to try but as of yet I haven’t give them a go. I will do very soon though and when I do if they feel lovely on the skin I might treat myself to one of them. 🙂 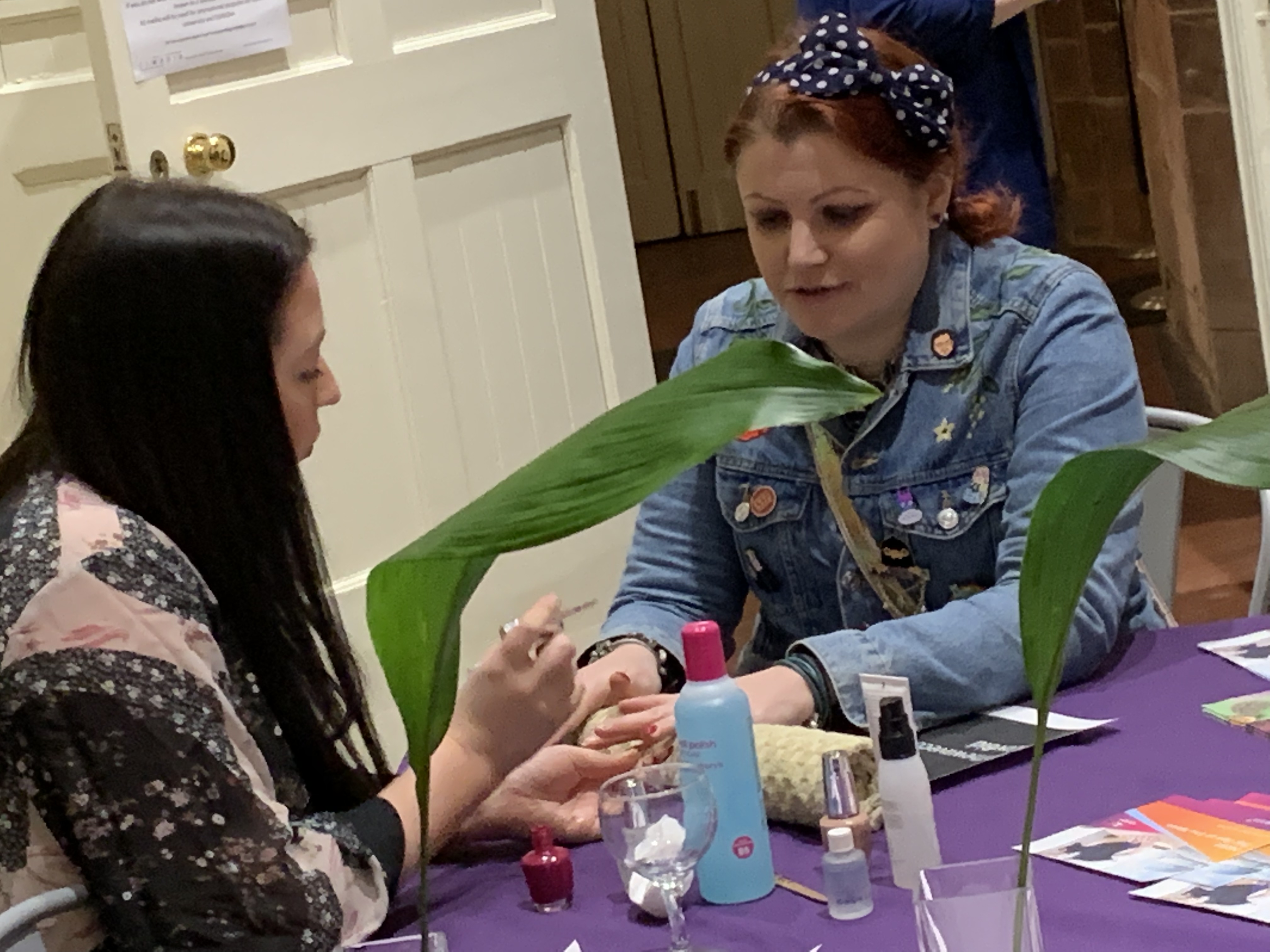 I wanted to get my nails painted as well but it was so busy I just left it in the end, but Amy and Emily (Coventry Life) got their nails done and they looked gorgeous! 😀 They both went for a raspberry pink colour.

We all sort of gathered together as we waited for Amy to get her nails painted and then ventured over to the last beauty stand, which was Dior. This area was incredibly busy and me and Gemma never got the chance to ask what they were talking about and showcasing at the event. However, later on the lady who was in charge of the stand noticed that she hadn’t yet spoken to us and said how she felt bad for missing us. Even though she had packed everything away at this point, she still went out of her way to go and get both me and Gemma a goodie bag with some little bits and pieces in! We both had a sample of their Joy perfume, as well as a mini sample of their Dior Addict Lip Maximizer. I’ve used this product a couple of times now and it’s lovely! It’s nothing to write home about, but it’s good and does me for work. 🙂 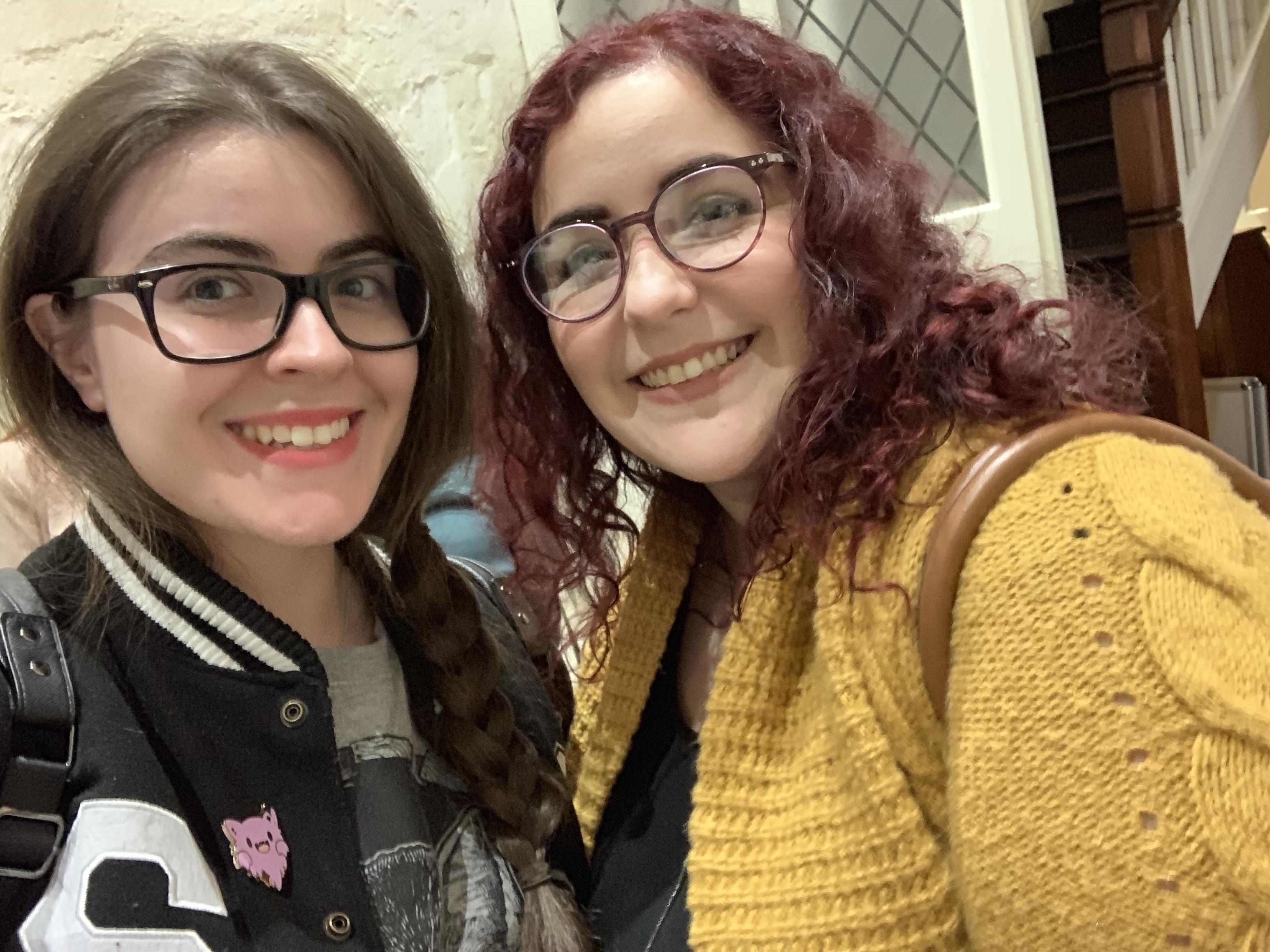 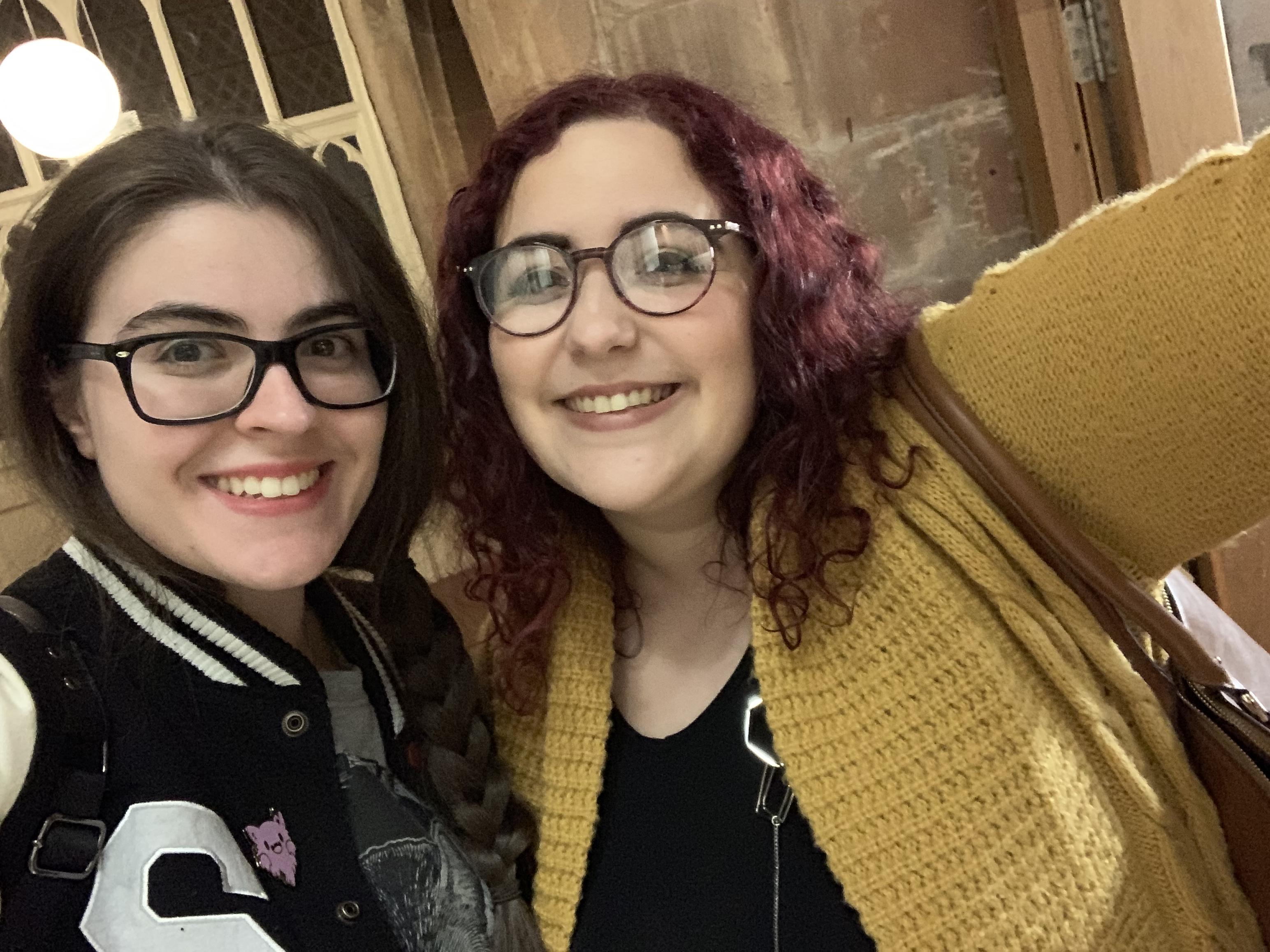 Before we all headed home after the event we had loads of selfies! I loved seeing Emily as I hadn’t seen her since before Christmas! She’s such a great person to talk to and always so honest in her blog writing, as well as just her in general. I also love that she collects pin badges like I do! 😛

Overall I had such a fun time at the event! I’m not the most fashionable in the world anymore and I don’t really do much in the world of beauty either, but most of all I loved seeing my blogger girls and just having a good natter with them all!

March was such a crazy month for me and I feel like this event (as well as the news I received earlier on in the day) was just the beginning of the crazy. 😛

Do you love fashion? If so which trends are you looking forward to this spring and summer?

Make sure to let me know in the comments down below!

Until next time all, take care and I hope you had a lovely weekend.