I still can’t believe it’s November already, let alone the end of the second week! This month is flying by and before we know it, it’ll be December. I need to start planning what I’m going to buy people for Christmas and whilst this year doesn’t seem too bad for ideas, I do feel like I’m kind of out of ideas(?).

This months with list was pretty hard for me to put together as I really struggled! Four of the items on this list are either items I’ve order, or already pre-ordered. I think I struggled due to Christmas coming up. I’m not really buying a fat lot right now, I need to keep items available for potential Christmas present ideas for Dane.

This being said, some stuff on this list (that aren’t orders/pre-orders) are things I’m hoping to buy at some point this month… We’ll see. 😛

Anyhoo, I hope you enjoy this months wish list hopefully shows off some items you guys may want to pick up too! 😀 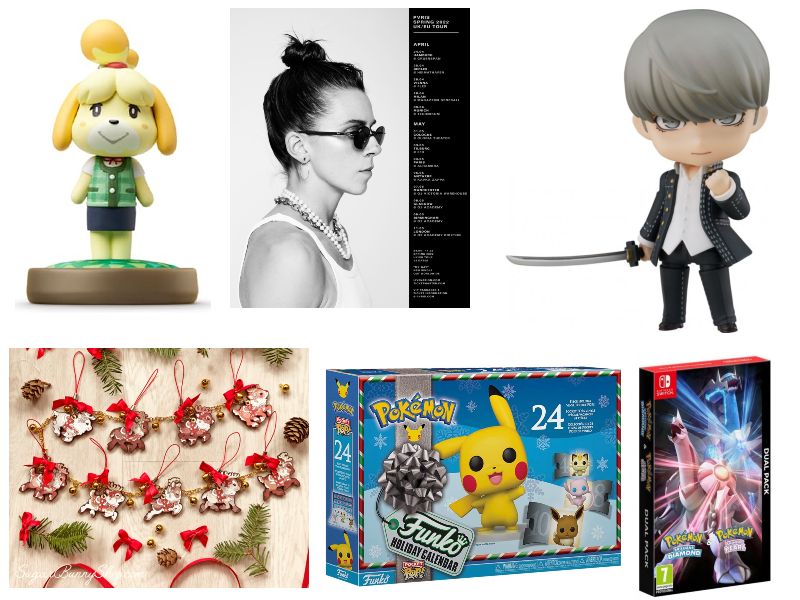 The first item on this months wish list and unfortunately… This is really hard to get hold of now. Putting this out there now for anyone who may ask later. This advent calendar was announced back in August and shortly after Pop In A Box UK popped it up for pre-order, which I jumped on before going to bed. When I woke up, Emily (Totally Emily) had mentioned that the advent calendar was no longer on the website… I was a bit worried and decided to drop an email to Pop In A Box UK to find out if my order was going to be cancelled. I’d not received confirmation of it, so I could only assume my order was okay. Later I found out that my order was safe, but the advent calendar had been taken down from the website due to how quickly it sold out! I’m due to get this in the post this month and I’m honestly so excited! I do love the Pokemon Funko Pop! figures, but I don’t want them at the same time. I only own the Mew Funko Pop! and that’s enough for me. With the little mini versions however, these will be cute to pop in displays in our office living room and bedroom, as well as stick on top of my desk monitor. 😛

This is a Christmas ornament I really wanted to buy last year, but never did due to the price of it. Christmas was expensive last year as I not only spoilt Dane, but myself with buying loads of stuff from American independent artists. This year both me and Dane have decided to do the house up as much as possible this year for Christmas, including popping some more lights up! Seeing as we’re thinking of doing the house up more Christmassy this year, a part of me wants to actually snag adorable AF reindeer wooden ornaments. I’d pop them on our fireplace, potentially with some battery operated fairy lights.

I’m always excited for Nendoroid releases, especially when you’re counting down the months from pre-ordering. I’m a massive Persona 5 fan, and Persona 4 Golden is still a game I’m playing at the moment. I got stuck on a boss and I’ve been debating whether or not to restart that game… ANYWAY I couldn’t resist pre-ordering Yo Narukami, the hero in Persona 4/Persona 4 Golden. He won’t be going with my Persona 5 collection, but he’ll go in mine and Dane’s game Nendoroid section of our collection! I’ll make sure to show him off on Instagram when he arrives at the end of November. 😀

This is something I ordered last week when I ordered my Animal Crossing series 5 amiibo cards! As some of you may know, I’ve been collecting the Animal Crossing amiibo figures since the summer now and currently I only have two/three left to buy, Timmy & Tommy and Kicks, as well as Smash Isabelle if you want to include her. On places like CeX they’re selling the Isabelle summer outfit amiibo for £15.00, whereas the official Nintendo UK store sells this one for £10.99… So go figure. 😛 I waited to see if the series 5 amiibo cards would land on the Nintendo UK store, which they did so… Yeah I popped her into my basket too. 😛

I AM SO EXCITED FOR THIS!!! November is an amazing month for games and I honestly cannot wait for this to come out next week, I just wish I was off work to play it all day. xD This being said, I’ll be spending all the weekend it’s out playing it. I bought both Diamond and Pearl, just so Dane can play Diamond if he wants to, but so far he isn’t fussed… Which is fine, I can keep Diamond for myself to grab any special Pokemon for Diamond, as well as the starter Pokemon. PLUS, if I wanted to stream myself playing one of the gen four remakes, I’d be playing Diamond. Pearl was my gen 4 game of choice (as well as Platinum) back in the day and I loved it so much, so I’m already excited about the nostalgia I’m going to feel again. 🙂 ALSO an FYI, I’m planning on writing next week about all the games that have come/coming out this month that I’m excited for and loving, so make sure to keep eyes peeled for that!

Finally, we have a random wish list item… But one I would really love to snag. When I moved to my current role at the start of 2019 I discovered PVRIS through listening to Kerrang! Radio during the working day, as well as driving to and from the office, and since then I’ve been in love. I missed seeing them in the UK when they did an intimate tour in 2020, so I’d love to finally go and see them next year! Why haven’t I ordered tickets then? Well, because I’m anxious. I’m anxious due to COVID and I don’t really know what the future holds? I’m seeing My Chemical Romance in May 2022 (just weeks after the PVRIS gig) but as I booked that back in January 2020, (when COVID wasn’t such a big thing) and how heart-breaking it was to get those tickets, I’m not willing to cancel the tickets for MCR. Thinking of it logically, I’d hate to get COVID from the PVRIS gig and then not be able to attend the MCR gig so… I doubt I’ll buy tickets unless it’s last minute, we’ll see.

So, there we have it guys, my wish list for November! I know it isn’t anything amazing, but with it being so close to Christmas, November is usually quite quiet.. Which is fair in every circumstance.

To think, the next wish list I’ll be writing will be for Christmas now! I seriously can’t believe how quickly the year has flown, it’s scary in a way, isn’t it?

What do you all have on your wish lists for this month? Make sure to let me know in the comments down below, I’m always intrigued at what people have on their wish lists too. 🙂

Until next time guys, I hope you’ve have a lovely week and take care!