Dayum have I really been M.I.A. the past week? I’ve been so busy this past week with being off work, as well as Dane being off work too. Everyday I kept saying to myself, “Nat you REALLY need to get some blog work done!” to then reply back, “Yeah… After this level on Lego Star Wars.” That level ended up turning out to be THE WHOLE GAME! Seriously fuck my life, and fuck you Lego! 😛

BUT me and Dane finally moved our arses after I got paid on Wednesday and took ourselves out for some very much needed retail therapy on Friday. We were like big kids that day too… I’m sure you can already see why!

We decided to go to one of our local shopping centers and this is actually a good little hail for me considering I am meant to be being good, and I’m after a new casual dress and some skirts/denim shorts so I have been on the warpath! Not a successful one mind. Onto the haul (by the way I apologise that the pictures aren’t super duper crisp and magical! I wanted to get the pictures taken quickly so we could play with the Nerf guns! :P)!

There’s a Yankee Candle store in the place we usually go shopping and it is amazing! They have all the exclusives in there, as well as some great two for offers. We always go for a mooch every time we visit as it doesn’t hurt to have a sniff on what candles you may buy next. We weren’t going to go in this time, but I’m glad I did as I picked up Candy Cane Lane, one of my favourites! It’s from the Christmas line, but the Christmas scents are by far the best in my eyes. This one came out a couple of years ago now and Dane was good enough to buy it me when it first launched. I’m coming to the end of that jar now and I refused to burn it anymore until I picked up a new one. This was in the sale for £10.99! A bargain for a large Yankee Candle. I won’t lie, I wish I had bought two of these. 😛

Now I have a bit of a complaint/back story about The Body Shop! I saw that they were doing 30% off of everything on the website so I thought sod it I’ll order those tea tree goodies I want! I ordered, paid with PayPal and at first I got two emails saying the payment had gone though and everything was fine. Then the website told me it hadn’t gone through and there was a problem… I got an email stating the same as well. BUT The Body Shop STILL took my money! I think it has been put back after me complaining etc. But what if I had assumed anything? I would be £16 down! This isn’t this first time this has happened with The Body Shop online and due to it happening again I refuse to use their website now… I’m sorry but The Body Shop is a big company and they should have this stuff sorted by now. It’s  been going on for years, very disappointed guys!

Phew rant over, onto what I bought. I picked up their tea tree ranges three step cleanse, tone, and moisturise kit. A girl I work with (hey Rhi!) has told me that she loves the tea tree range and said how good it is, so I thought I’d try it. So far it’s pretty good, but it has caused my skin to break out a bit… Think this is meant to happen but I don’t think I like it. The foaming cleanser is lovely and cleansing and is fun to use! It reminds me of when I was a teenager and use to use the Simple foaming cleanser. The toner is the real “wow” factor of these steps. If you have sensitive skin then this probably isn’t for you. It’s very strong due to the tea tree and due to that it does sting the skin when applied. I was stupid enough to go over my eyes with it. The burn, oh the burn! Now the moisturiser is great but it’s probably my least favourite part of the kit. Purely because it states that it will matt the skin… Bollocks it does no such thing! Wasn’t surprise to be honest. Other than that it is an amazing light weight gel based lotion that really does wonders for my skin… Just doesn’t matt it like it says it will. The set cost £14 BUT as I had a £5 voucher on my Body Shop card it only cost me £9. What a bargain eh!? Even at £14 I think this set was a bargain as the cleanser and toner are both £5.50 each, and the moisturiser is a shocking £9! I’ll definitely pick up this set again for the money though.

Random but this is something I picked up with Dane when we popped into The Range for some home ware goodies. I’ve spotted it in loads of shops but never been bothered to buy it. Dane pointed it out to me due to the fox on the cover, and at £6.99 I thought meh why not pick it up! Give me something to do when the weather is nice and I want to sit out in the garden. I haven’t yet given this a go but bloody hell it’s going to be fun to do once I get started! 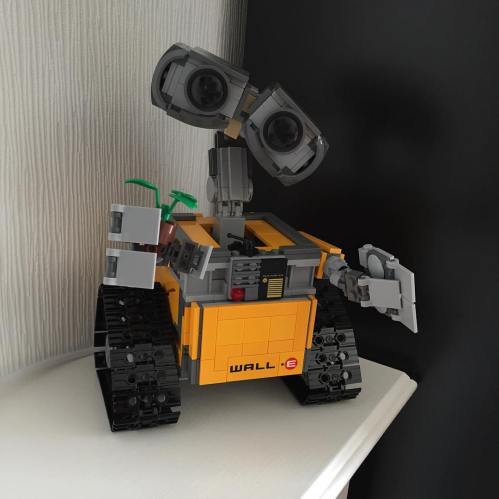 This little guy has been on my wish list since before Christmas when I spotted him in Forbidden Planet. Since then I have asked and pestered Dane to let me buy him, or him to buy it for me but each time he has said no. I get why as this wasn’t cheap at £39.99! You know what though? Totally worth it! We visited two Toys R Us stores to get our Nerf guns and in the first store we picked this Lego Wall-E up. That evening we put on some Kevin Smith and Clerks and built this little guy up. We only got half way and went to bed as it was getting late, but when I woke up the next morning Dane had finished him and popped him on our fireplace. He’s absolutely gorgeous and really is a nice piece to add to our living room.

The one thing that Dane was after when we went shopping was a Nerf gun… Well guns, one each. We had said about a year ago how when we finally bought our first home and were settled we would buy ourselves Nerf guns to play with in the house. Well now we finally have some, as well as some extra ammo! Dane always wanted the Stormtrooper blaster and after finding one in a second store he decided to get it. It cost a mean £39.99 but it’ll be great for cosplaying a Stormtrooper in the future (something we both want to do). I couldn’t settled on something however, and I constantly ummed and ahhed at the bow and arrows, as well as various different guns. I eventually said, “Meh I may as well match you and get a Star Wars one.” and as I reached for the Han Solo gun, I saw that they had made one for Rey! Perfect! So low and behold I picked up a Star Wars gun too. Mine cost £24.99. The extra bullets were under £10 which was pretty reasonable if you ask me.

Finally we have my favourite item on this haul (apart from the Wall-E and the Nerf guns because come on! Nothing better than being a big kid! :P) which is my new Killstar jumper. I didn’t get this from the official website, but instead I bought it from someone on eBay. It was brand new with the tags on as she had only tried it on to see how it would fit on her. So for £25.00 (inc P&P) I thought I would snatch it up before someone else could! This is of course still available to buy from the Killstar website, which I have linked here for you! I haven’t worn it yet but I’ve tried it on and it is so damn soft and comfortable! I want to team it up with some denim shorts or thick black leggings and Dr Martens boots or brothel creepers. It’ll probably end up being one of my staple pieces for autumn and winter this year. CAN’T WAIT!

But yes that was my short pay day haul for August! I’m meant to be being good so yes there are a couple of treats in here but I am trying to be good and watch my money at the moment.

What have you been buying yourself this pay day? Make sure to let me know in the comments!

Until next time take care all and I hope yo had a lovely weekend.