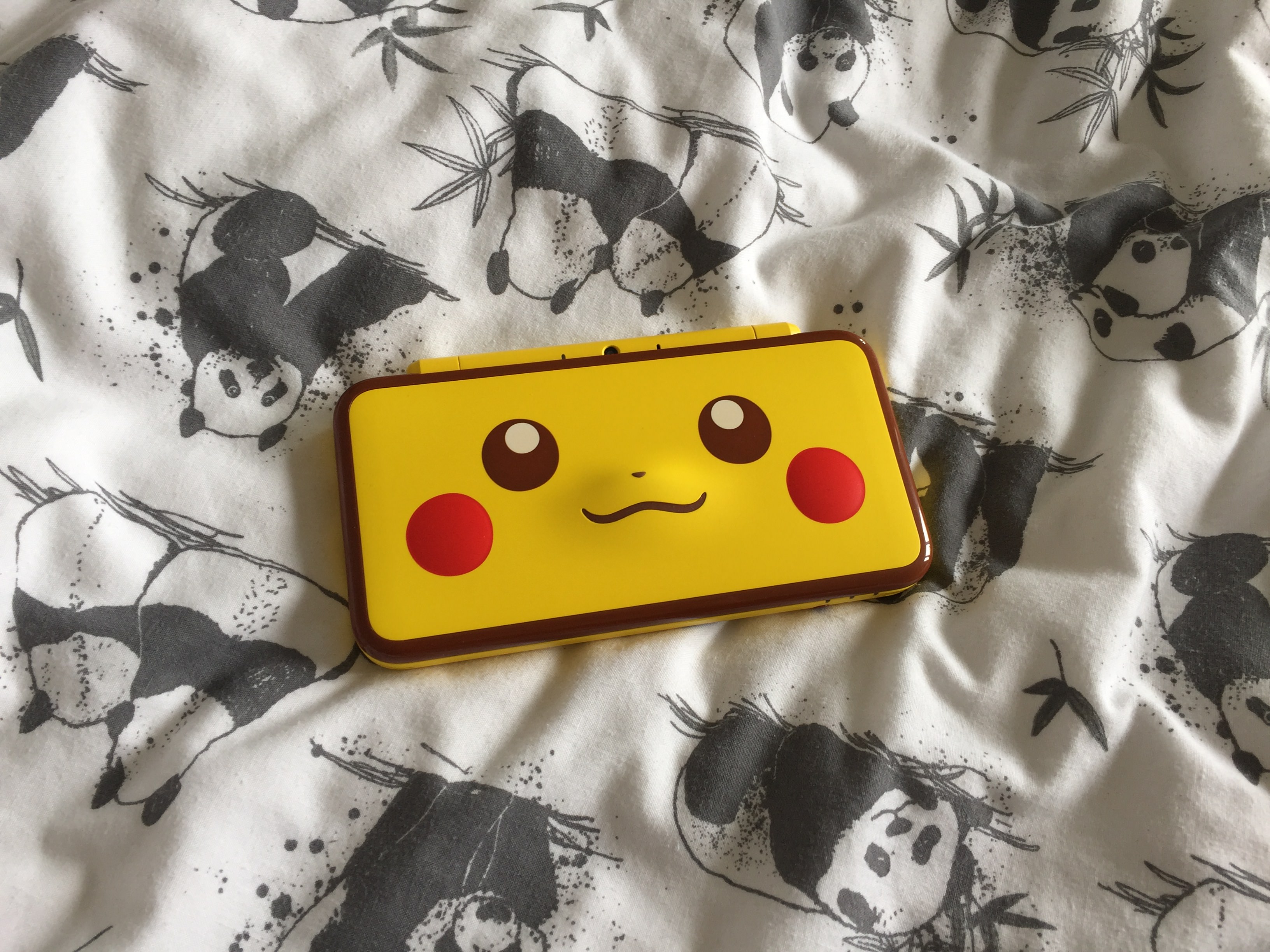 I’ve wanted to write this review for the past month now but sadly I’ve been too busy to get around to it and in all honesty, I wasn’t sure if my readers would be interested. I put a poll on my Twitter account (@maybeecoffee) recently and out of all the items I mentioned I was interested in reviewing, my Pikachu 2DS XL was the one that everyone wanted!

I cannot wait to share this awesome handheld console with you all. I was so excited when I got it and I still love it 2 months down the line.

I got this in March as a massive treat to myself and I’d wanted a new 2DS for ages as I was getting fed up of my old one. I hadn’t played my old 2DS for ages due to the screen size and how uncomfortable it was to hold. I missed playing my games and it was around the time Dane wasn’t home due to work, so I wanted something to keep me occupied/busy whilst he was away for a month. FYI he was back during weekends. 😛

So I took the plunge and bought my Pikachu 2DS XL from Smyths Toys, which you can still buy here if you want it yourselves. Wow this sounds like a sponsored post, it isn’t. 😛 Smyths Toys is just one of the cheapest places around for gaming stuff, so I always recommend it to people!

I’ve never written a review for anything like this before, so please bear with me. I know it’ll be boring and such but I want to try and talk in detail as much as I can about the handheld.

I remember seeing the Pokeball 2DS XL and wanting that, as I didn’t think we would get the Pikachu version in the UK. I’m glad I waited though as I would have ended up regretting that purchase very fast if I’d have made it.

Enough about that now, I’ll talk a little about the handheld itself. I’m going to do comparisons between the original 2DS and the New 2DS XL. 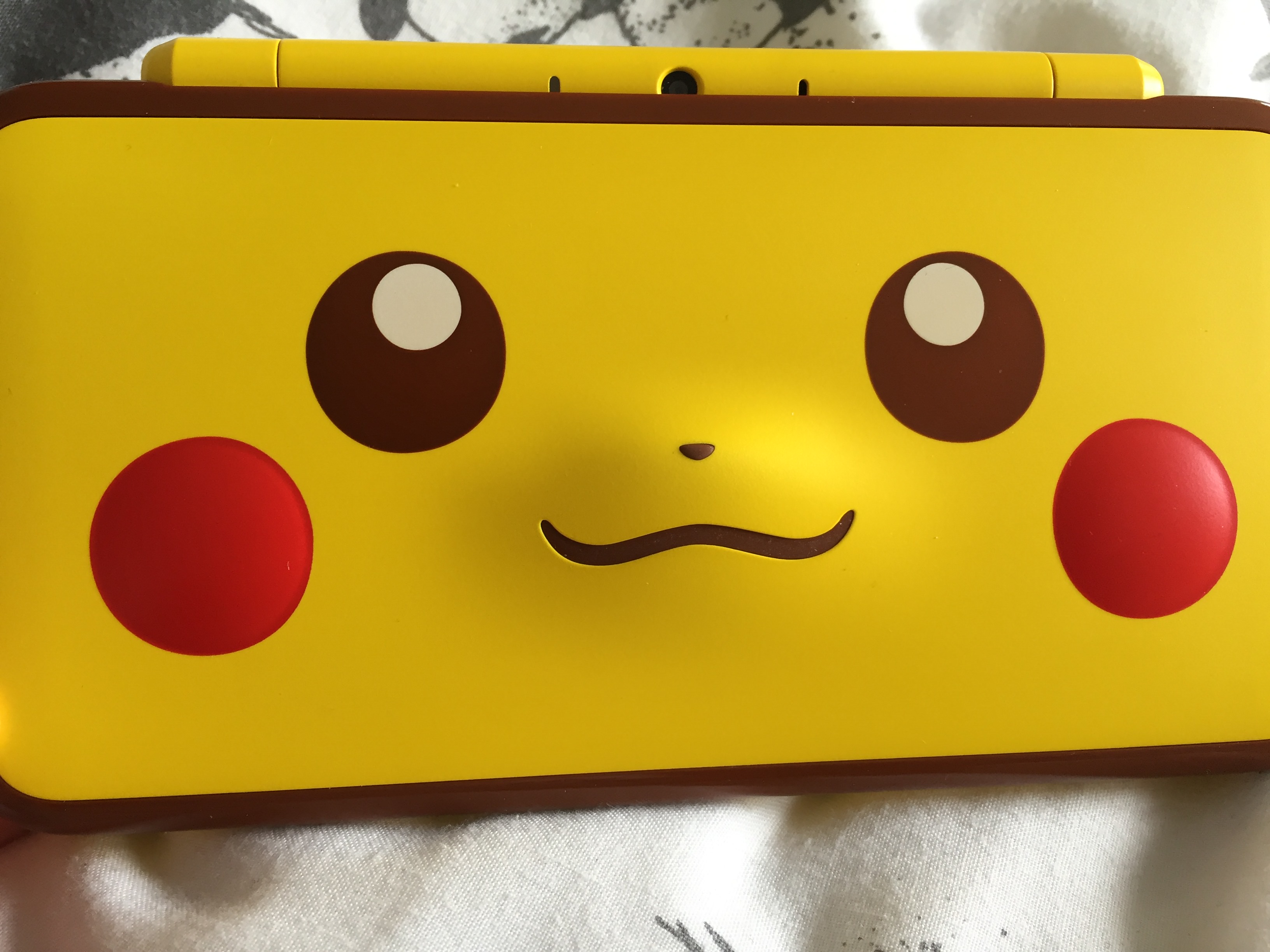 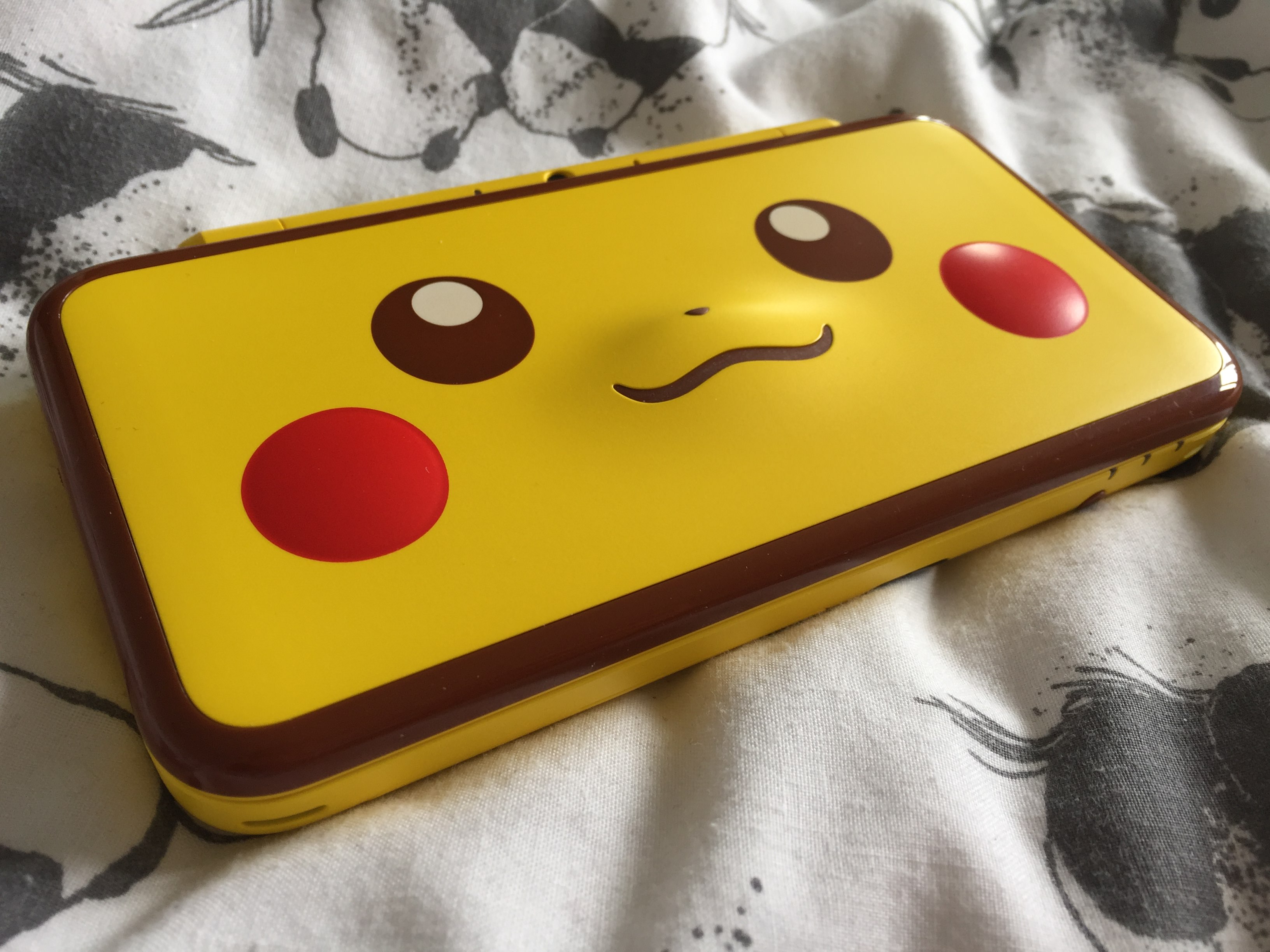 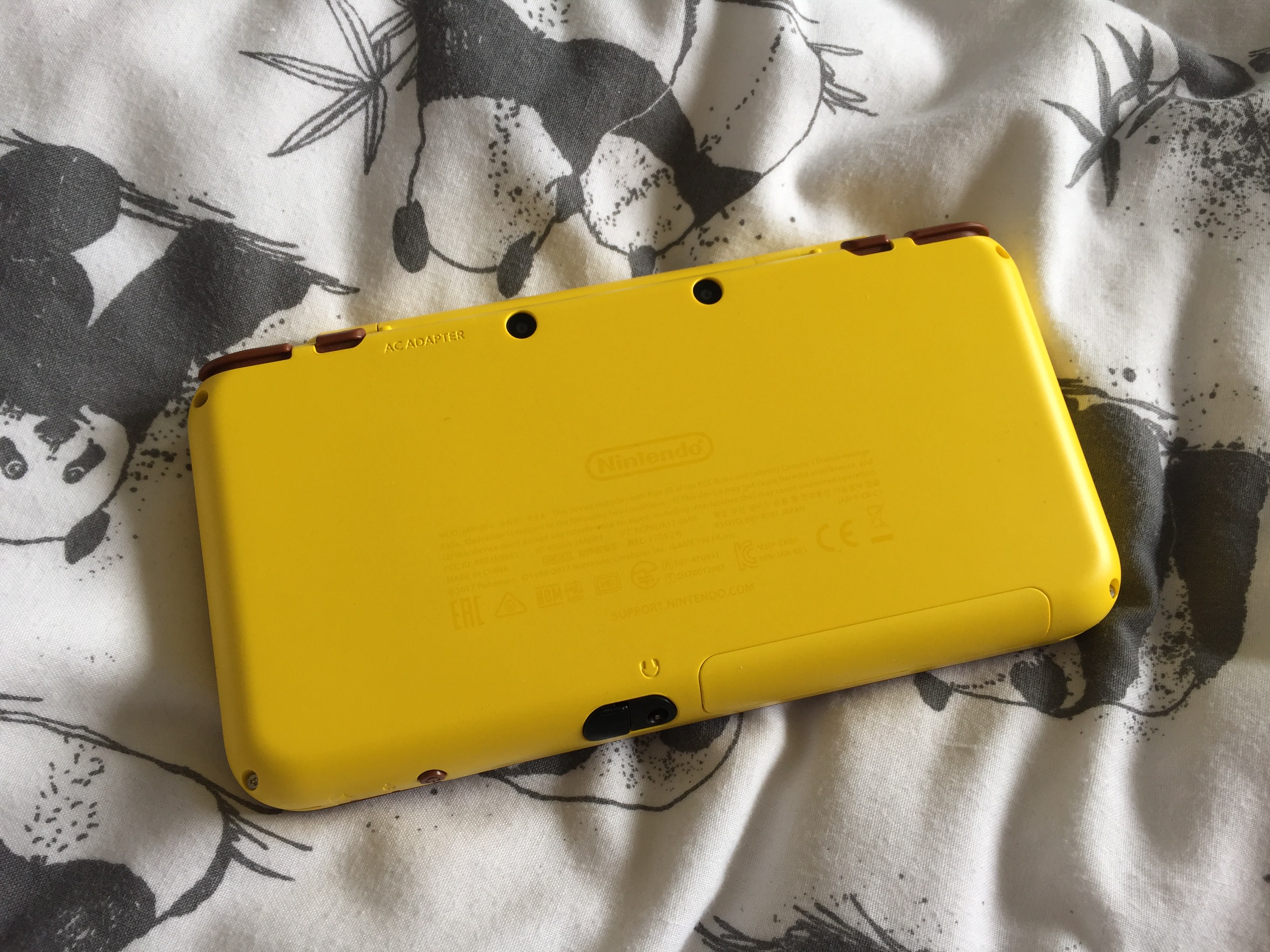 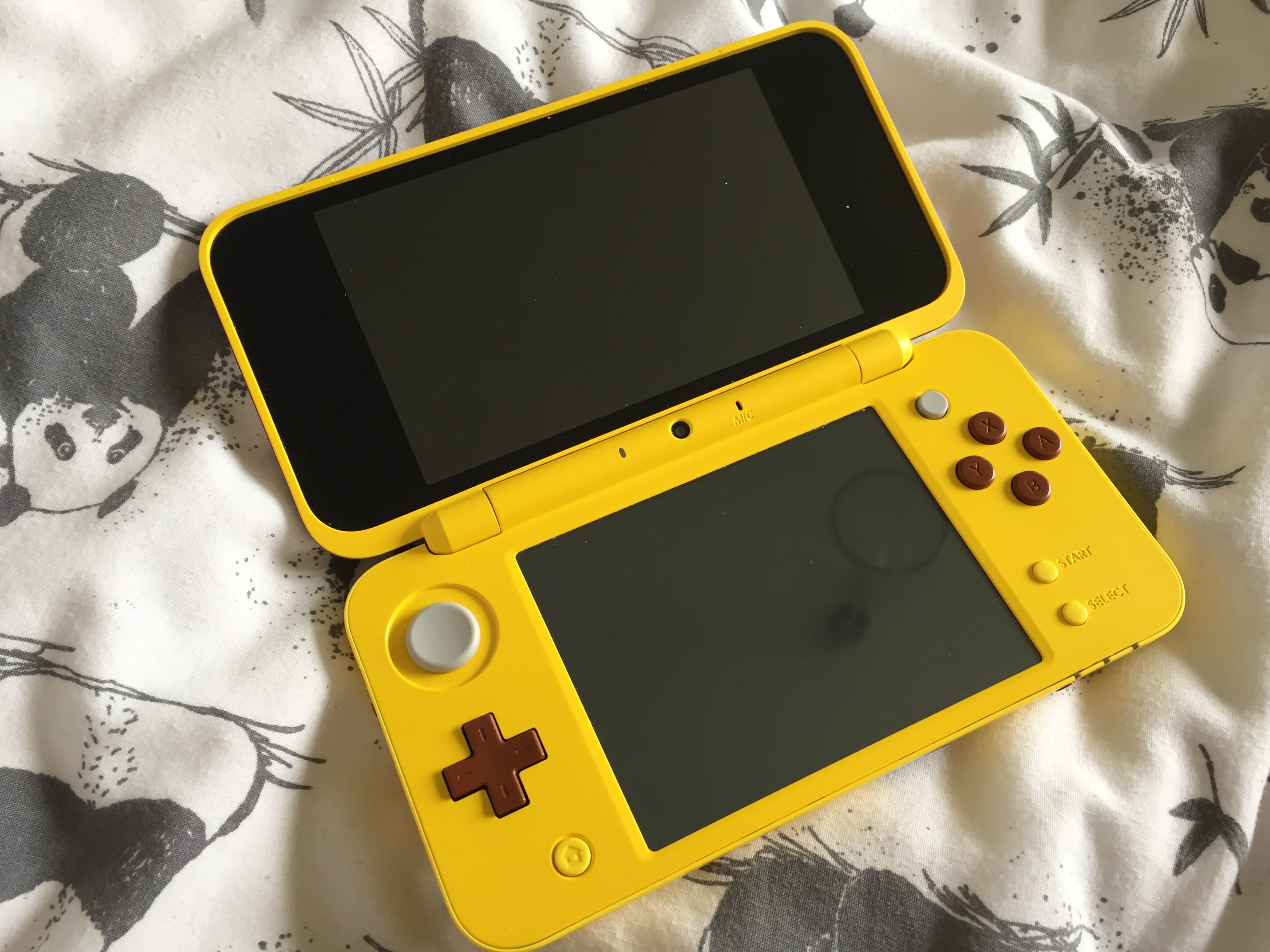 When you open the 2DS you’ll continue to see the yellow and brown colours, the brown being on the D pad, as well as on the X, Y, A and B buttons. The screen sizes are HUGE and I felt a little overwhelmed by them to be perfectly honest. I love it though! The screens on the 2DS XL are exactly the same size as the New Nintendo 3DS XL, which is pretty awesome. 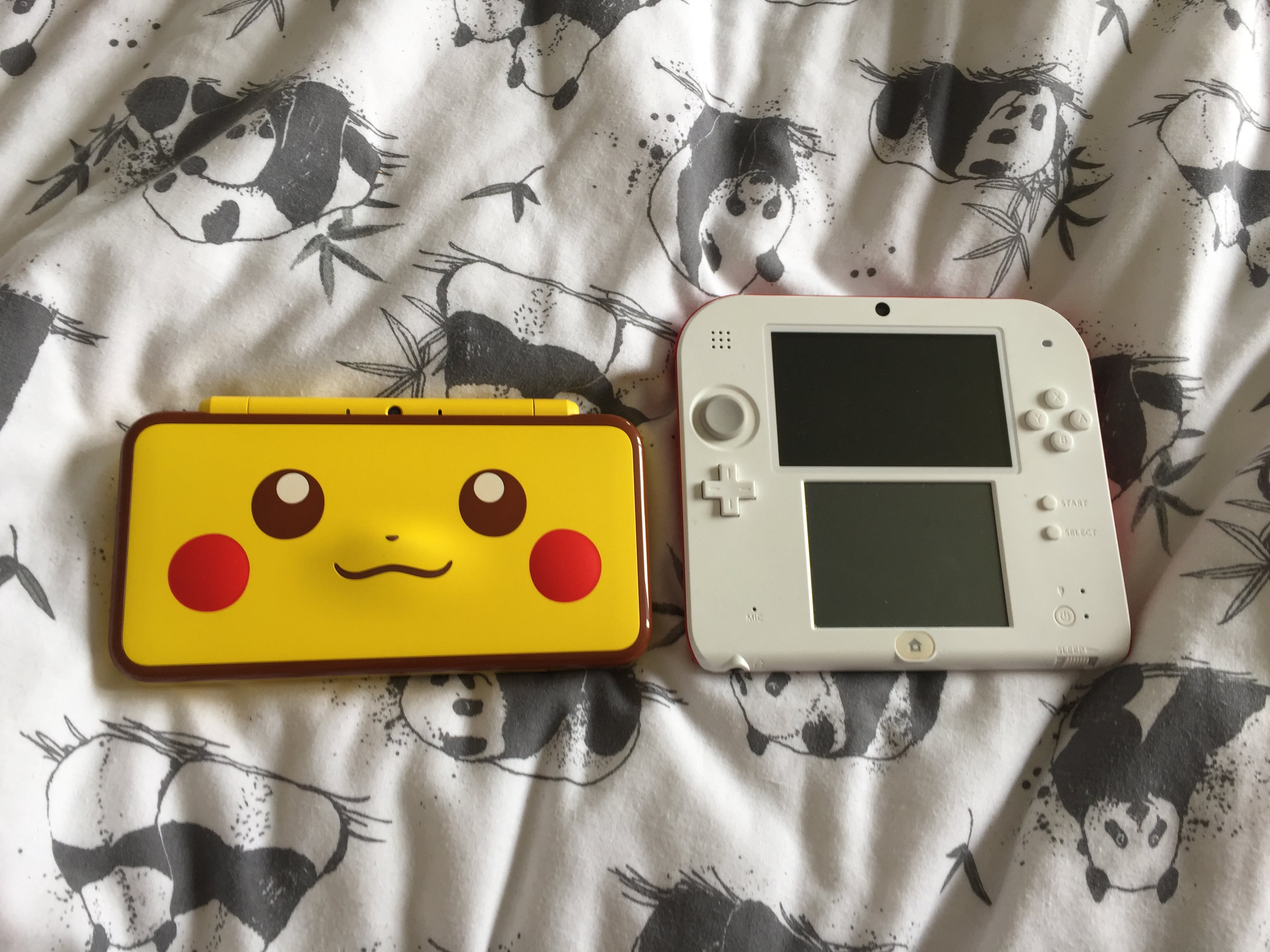 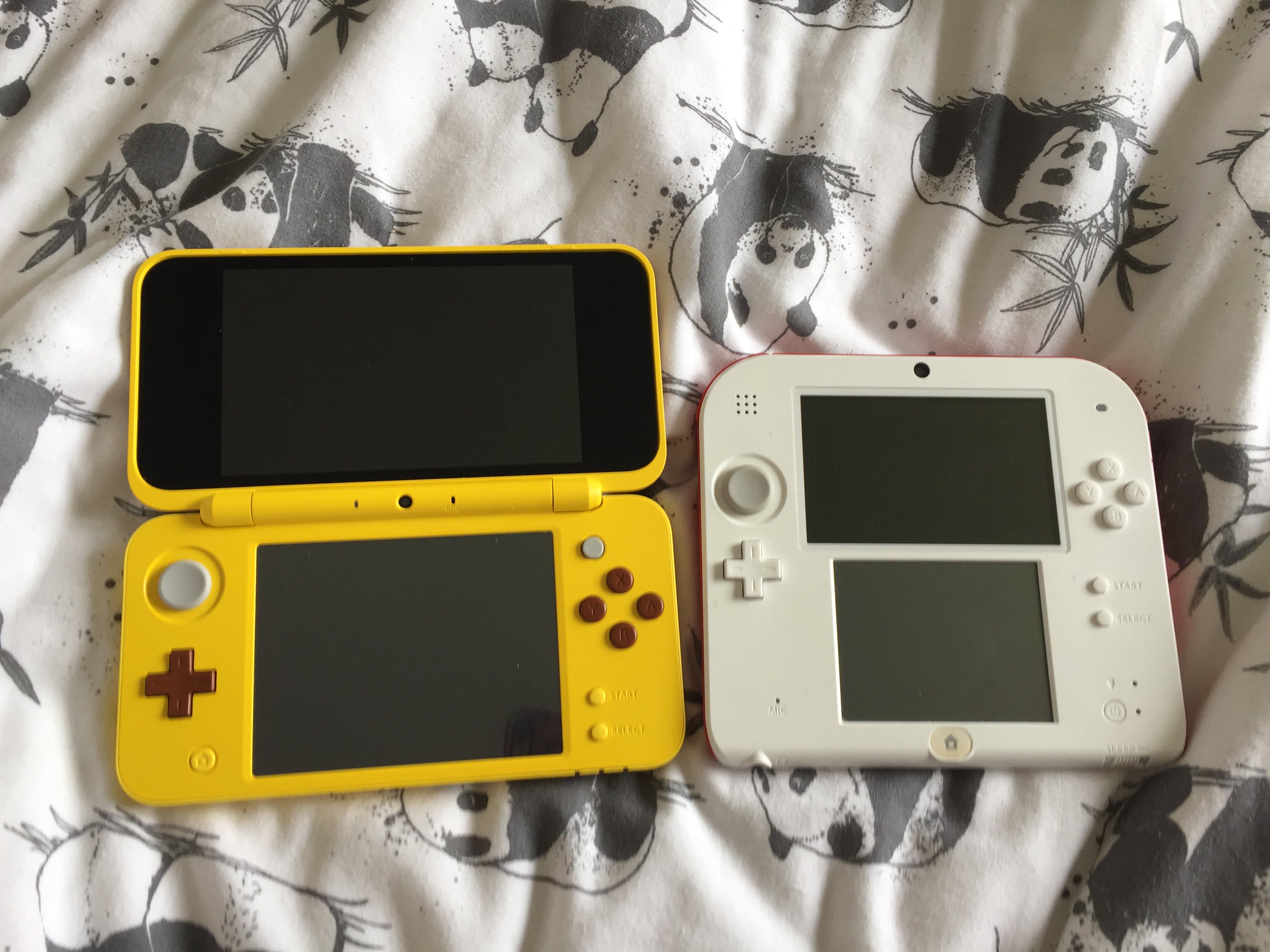 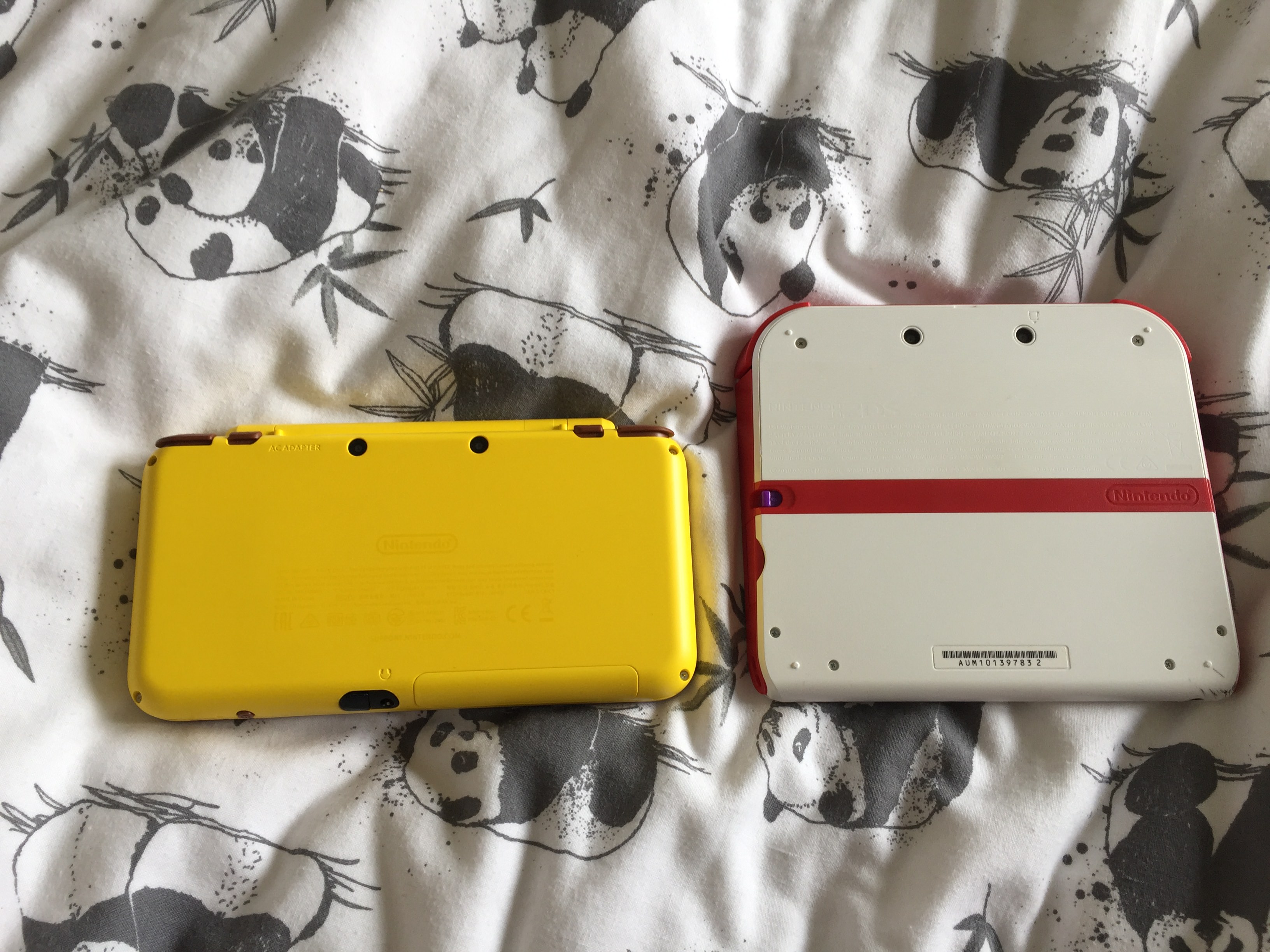 You can see the difference in screen sizes above where I compare the original 2DS to the New 2DS XL. 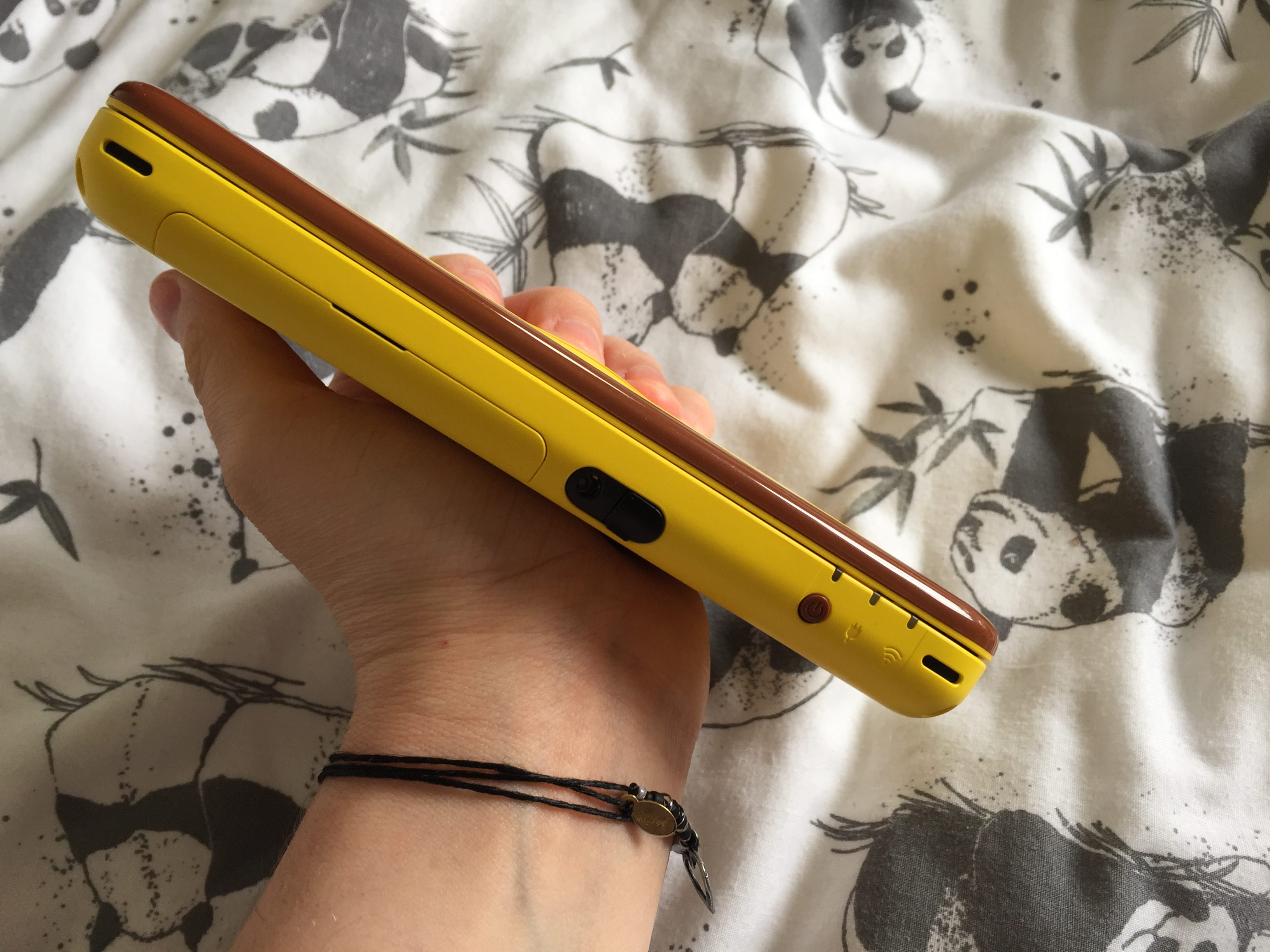 Along the bottom of the 2DS you have the space to insert your game catridges, as well the micro SD (which you get with the console itself) which is then closed off to keep safe and I suppose “hidden” away. I really like this feature, although I’ve seen a lot of people complain about it. I think it looks better.

Next to that you have the headphone port, as well as where the stylus is kept. This is the only thing I dislike about the 2DS XL. I’m so used to a longer stylus with my old 2DS that this shorter, stubbier and in my opinion hard to old, as well as uncomfortable. Due to this I don’t use it as much as I could. In future I’ll definitely invest in getting something else for it.

Then finally you have the power button, which is brown too. Next to that you have the “on” light, the “battery” button and finally the “wifi” light. 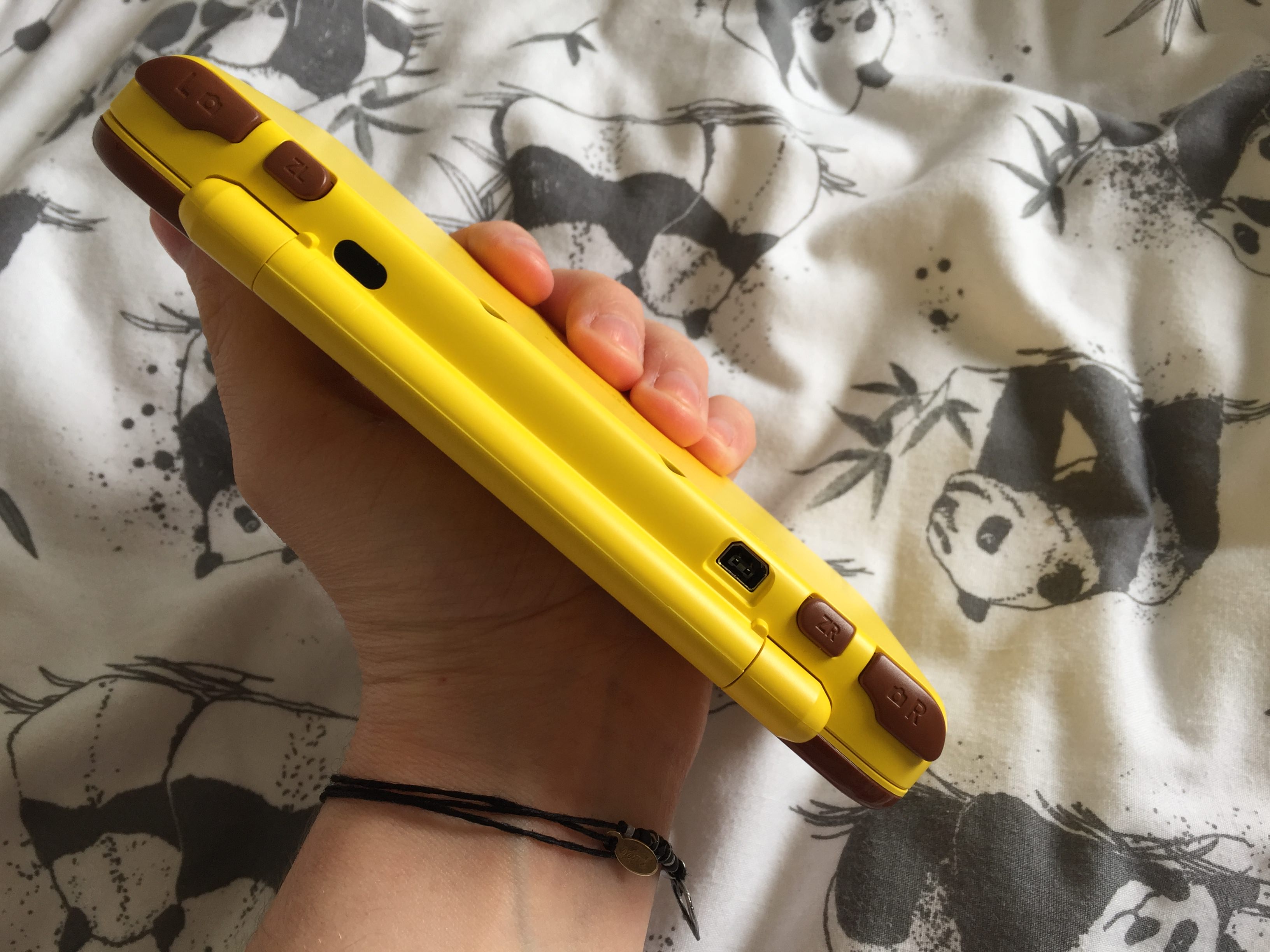 On the top of the console you have the AC adapter port for your charger. I was used to this being on the bottom with my old 2DS and at first the port area felt a bit stiff on my Pikachu 2DS XL, but I think that was due to it being new. 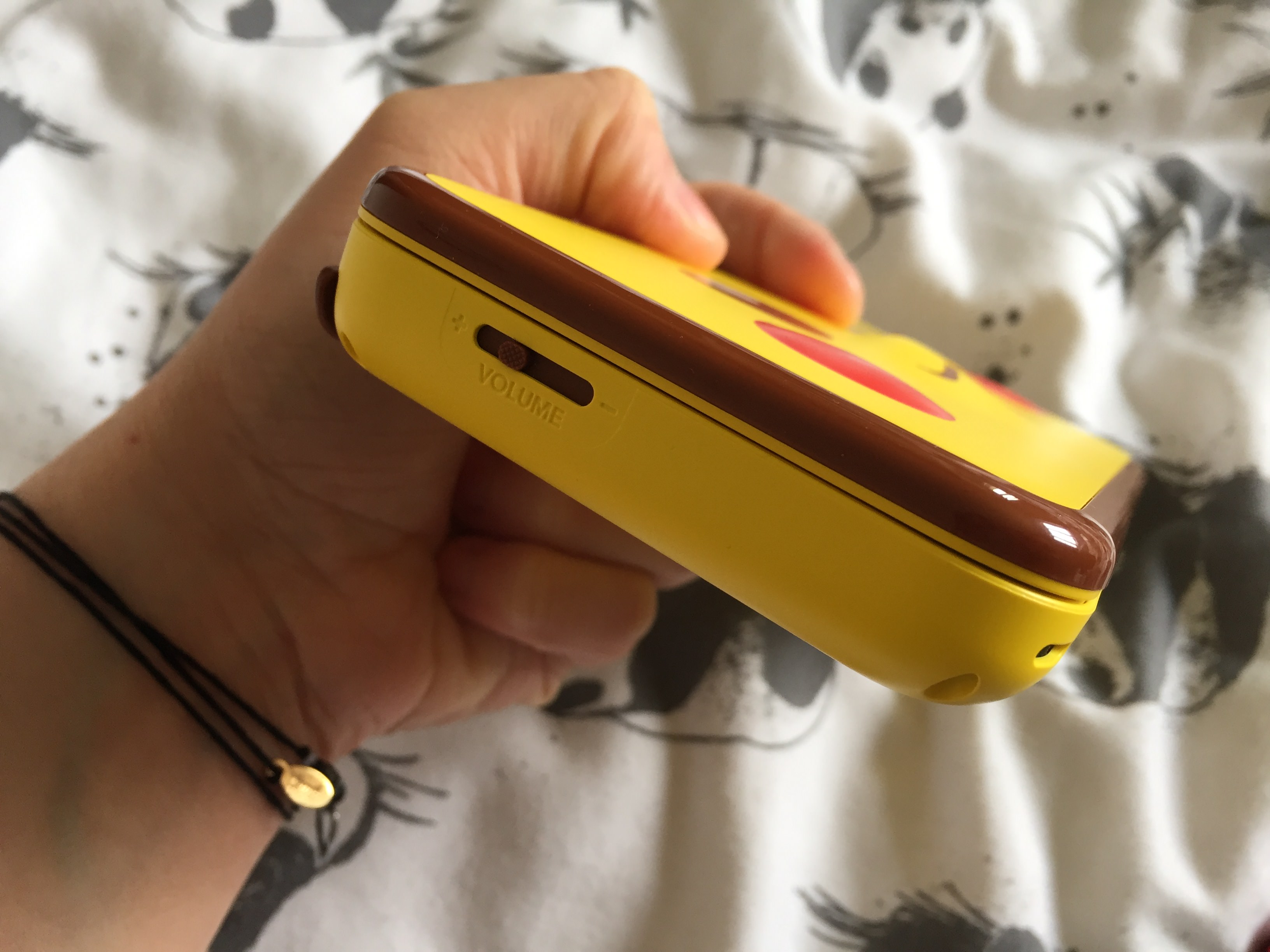 On the left hand side of the console you have your volume controls, which are in brown. it’s really easy to adjust the volume and let me tell you, you don’t need the sound on high, as the quality of it is amazing!

Overall as a whole the Pikachu 2DS is gorgeous and definitely aesthetically pleasing to look at.

When turning this on, the screen is so vivid and bright, it’s amazing! Of course this isn’t 3D, hence the name and I love that. I remember when the 3DS first came out and I had a go on a demo in HMV. Me and my old friend were really sick after. Never again!

The original 2DS has a sleep button so you can pause a game for a while if you have to, whilst saving the battery life. However on the newer 2DS with the screen you flip up and down, you just well… Close the screen and it’ll sleep. It’s so amazing and I already love that feature to death!

The top screen can be put into three different positions, the last one making the 2DS flat, the middle one and the closest one to the gamer. I always opt for the middle one.

I have an Animal Crossing theme on mine that I bought AGES ago on my old 2DS, but I love it so much! My Isabelle icons for my page I won on the Nintendo Badge Arcade, WHICH YOU NEED TO GET! It’s a free game where you can win badges to customise your theme with.

Anyway back to overall…

I LOVE my Pikachu 2DS XL so much and if anything it’s just encouraged me to play my 3DS games even more, as well as get some new ones. I’ve recently ordered and started playing Detective Pikachu, which I am loving by the way!

If you’d like to watch a video to hear and see more comparrisons that I may have missed out on, please watch it! I did before buying my Pikachu 2DS XL!

So, what do you think of the New Nintendo 2DS XL Pikachu Edition? Would you buy it? If you love playing Nintendo 3DS games, which ones are your favourite? Make sure to let me know everything in the comments!

Until next time, take care all and I hope you’re having a lovely bank holiday!