I cannot believe we are officially over halfway through 2019! The year is flying by, but I feel the past two months really have flown since I’ve been at my new job. It’s been amazing so far and to be honest with you the end of May and start of June have been amazing for so many reasons!

After years of wishing to go, on Wednesday me and Dane FINALLY booked our trip to Japan! I still cannot believe it’s happening and the sooner it sinks in, the better. I’ll be writing all about this in June at some point. 🙂

I’m off work next week which I’m really excited for as I haven’t actually had any holiday since my birthday in January. Me and Dane have loads planned, including going to Manchester for a few days and even going to see The Book of Mormon there! 😀

Anyhoo, I’ll try and give a massive life update post soon on my blog instead of using my monthly post to give you guys TOOOO many updates.

On with the monthly favourites! 😀 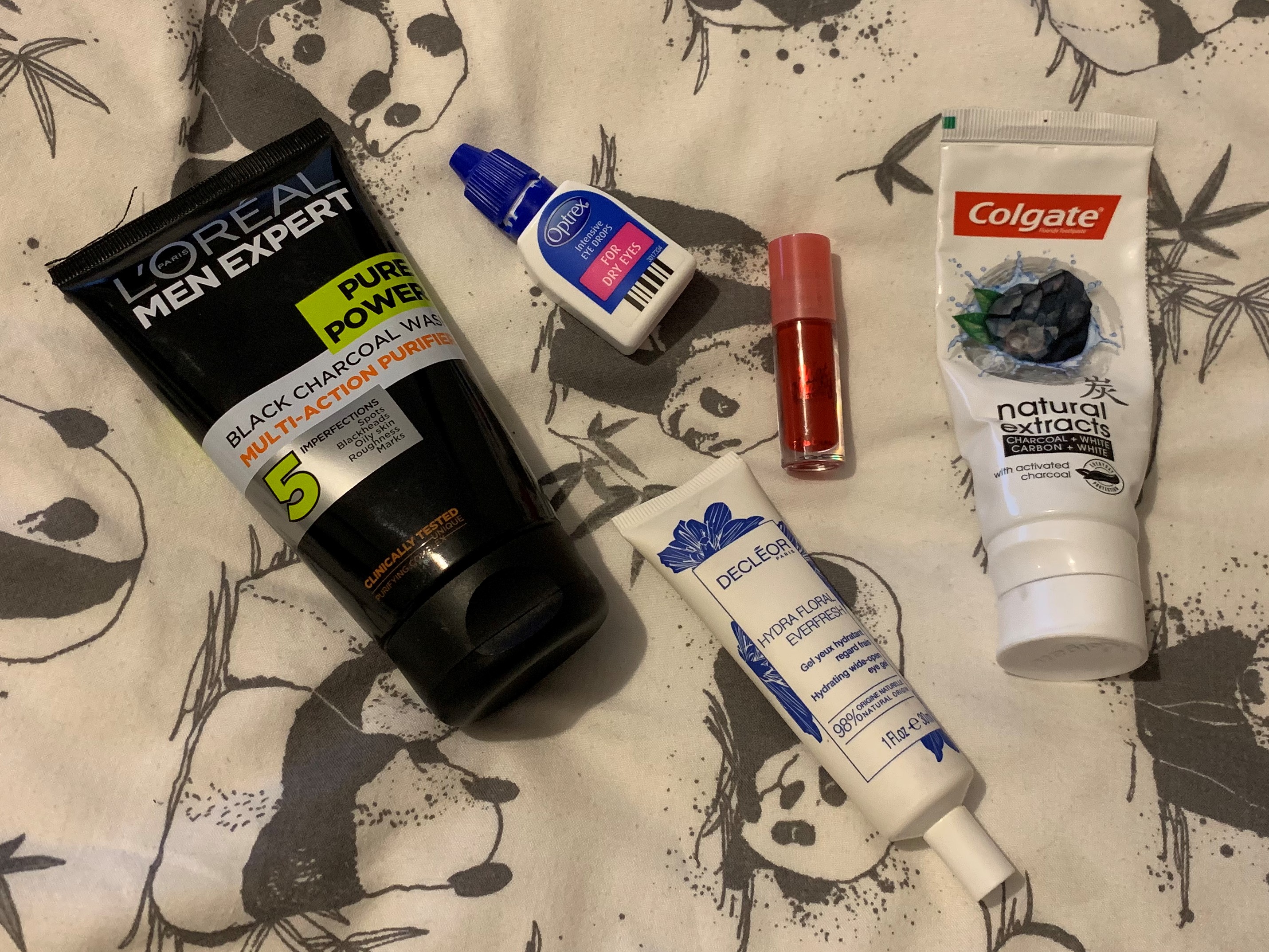 If there’s something I love, it’s a toothpaste that tastes sweet, foams loads and leaves my teeth and mouth lovely and clean. This is a new charcoal toothpaste by Colgate so on a food shop at the start of May I saw it was on offer so decided to pick it up. Well, I picked a couple of these because I do love a charcoal toothpaste. Since buying it I really do love using it morning and evening. If anything, it’s a pleasure to use. It doesn’t go black when brushing with it, which is fab! I know some people don’t like that when it comes down to charcoal toothpaste – this is nothing like that!

In the Easter sales I ended up grabbing some bargains, including the Lime Crime best of red lips and this was one of the four products inside of the set. Out of the four this is definitely my favourite to be honest, which took me by surprise! I’m not going to lie – whilst I thought the wet cherry glosses looked amazing, for £16.00 I thought they were a rip off for something you could pick up on the high street for half of the price and less! I’ll admit it. I’ve now eaten my own words, these lip glosses are definitely a game changer. They’re so light, not sticky and so much more pigmented than I thought they were going to be. If I fancy a bit of colour, but don’t wish to wear anything heavy I’ve been reaching for this. The wet cherry glosses also smell AMAZING! They remind me of the Yankee Candle Cherries On Snow and I can only image this is what an American cherry pie must smell like.

Since I started my new job, I’ve been seeing my mom more – which is so lovely. We tend to pop to the shops together after I finish work or relax. On one of our shopping trips I picked up a new eye gel for myself, that isn’t this one however. The one I bought was anti-aging and BURNT MY SKIN! It was horrible and I was beyond gutted in so many ways. My mom gave me this eye gel as she knew how I was after a new one. So far this one has been amazing and I haven’t had any issues. It’s a lovely cooling gel and even though I’m sure it isn’t anti-aging but I feel like it does help with brightening my eyes a tad.

I really do love using eye drops, especially during he cold and hot months especially. Depending on the type of eye drops I buy, depends whether I repurchase them again or not. I don’t feel like I’ve ever really enjoyed eye drops as much as I have with the Optex ones. I find these work really well for me, especially as the hayfever season has officially started. These really help my eyes first thing in the morning to wake me up, as well as refreshing my eyes. I make sure to use these daily to keep my eyes from drying up whilst the weather is on and off of what it wants to be! 😛

IDGAF is this is a product for men, I’m still fucking using it! 😛 It it works for blokes, it’ll definitely work for me. 😉 If you know what I mean! This is actually Dane’s face wash, which he loves to bits! He’s had this since about March/April now and around the time he first got it he recommended I give it a go to see what I thought of it. I LOVE it! A little bit of it goes a long way and it goes REALLY creamy and with loads of lather. It gives a lovely cooling feeling on the face, which is great when the weather is really warm. I give this a go once a week to once a fortnight and it really does give my skin a bit of a boost.

I was so happy for Attack on Titan to be back for the rest of season 3 at the end of April and weekly me and Dane have tuned into Crunchyroll or Funimation to make sure to watch the latest episode. We’re caught up so far at the moment and each episode has me on the edge of my seat and by the “to be continued” at the end of the episode, I am already craving more! Dane knows what’s happening throughout the series at the moment as he’s all caught up on the manga – so he’s always one step ahead of me in regards to what’s going to happen… Which sucks. 😛 One of the episodes recently was really emotional for me and I really need this weeks episode soon!

I have been so excited for Detective Pikachu since it was announced months ago so as soon as tickets were released for this film at my local cinema I made sure to get our seats booked! It was an awesome date night out to be honest with you and I couldn’t have been any happier as I left the cinema after watching this. It was everything I wanted and more and I would love to go and spontaneously go and watch it again. I played the 3DS game of this and it was completely different with the story line in various ways. I honestly enjoyed the film more, because whilst the game had more information about Tim’s father and clue searching the film had more about what happened to Tim’s father. Recently Nintendo announced that there is going to be a sequel to Detective Pikachu on the Switch, which I am SO EXCITED FOR! 😀 Honestly if you haven’t been to watch this film yet, go and see it before it’s gone from cinemas.

I love this manga series so much and I was so scared that volume 4 was actually the last volume in the series! Thankfully this isn’t the case, but this volume was really emotional and it really tugged on my heart strings. I’ve mentioned this manga series on and off in the past on my blogs monthly favourites, but it’s about a polar bear who falls in love with a seal pup. Of course polar bears eat seals so the love is seen as strange, especially by the seal who at first is constantly scared that the polar bear is going to eat him. Along the way they start to travel together and even make some friends along the way. This manga has been turned into a mini series, which I really need to watch more of! 😛

If there are three songs I couldn’t stop listening to this past month, it was definitely the three shown above. I discovered all these thanks to listening to KERRANG! Radio during the week at work and I’ve fallen in love with them all! “Bow Down” has some screaming singing in there, as well as some normal singing. I love the combination between the two singers and it works really well! I love singing along to it on my way home from work, as well as in the evenings when I’m chilling out. PVRIS are a band that I feel I’ve discovered too late! I now really want to get their albums to listen to, as I really love their songs, especially this one. It’s so damn catchy and I always find myself singing along to it, especially if it comes on when driving. Finally we have Grimes “We Appreciate Power”. I’ve always listened to Grimes on and off over the past 7 years and I do rather like her music. Another artist whose music I need to download and listen to more!

This is a game I have not been able to stop playing whenever I have a moment to pick up my phone to play it. I play it in the morning when I wake up, if I have a spare 10/15 minutes before work, during my work break and then in the evening on and off after work. I don’t know how I have suddenly grown so addicted to it, but I have and I’m loving it! 😛 Even talking about it now, I’m going onto the app to see if there is anything I need to do! I am so excited for Animal Crossing to come out on the Switch and I’m keeping fingers crossed that Nintendo will announce information at E3.

So those are all my favourites from May! Again, I cannot believe it’s June already. The start of June is always a busy month for me and Dane, including celebrating when we bought our house as well as our anniversary. We’ll be 6 years together this time next week and it’s crazy how time flies when you’re having fun. 🙂

Until next time, take care all and I hope you have an amazing weekend. 😀