It is officially September and I am already loving this month. I already feel like I have some awesome stuff planned, which I’m excited about. I’ll be attending a couple of blog events, which Dane will be at as my plus one. I love going to blog events with Dane. I feel like we can really have a date afternoon/evening together.

As well as that we also have loads planned with friends from gaming days to Dungeons & Dragons.

However, it is that time again guys where I show off to you the things I want to buy this month. I feel like we are already into the second week of September… I blame the bank holiday myself. I feel like the August bank holiday always comes up at the last week of the month, not the week before last. Is that just me?

Anyway, I feel like I’ve wanted loads of stuff this month, but at the same time I haven’t due to saving money. Saving money is something I am trying so hard to do as Japan IS looming! I want as much spending monies for there as possible without stressing about not having any/not having a good time. To be fair, I’ve already treated myself to a few things this month, but sod it! I’ve already earned a little treat… Or two! 😛 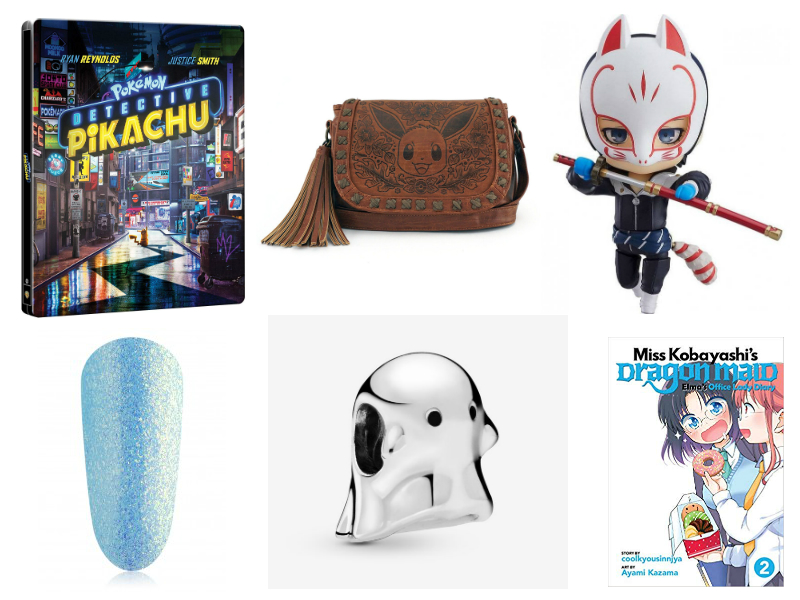 I swear the recent drop from Pandora was AMAZING! I haven’t seen a collection for years where I fell in love with most of what they were offering and you know what? I wasn’t the only person either. I’ve fallen in love with two charms in particular – the You Are Magic Dragon Dangle Charm (which I bought over the weekend) and the one I will be talking about on this post. Years ago, Pandora came out with a ghost charm, which I adored but never bought. It just never happened and sadly that charm is LONG GONE now! To be fair, I don’t regret never getting the little ghost charm now, because this Boo the Ghost one is so much better. It’s such a cute chubby ghost and I honestly need him in my life. I’m not going to lie, I’ll probably end up buying this when I’m paid next! What do you think of this little cutie?

I actually own the matching wallet (which you can see here) for this Loungefly Eevee bag, which I adore and have no regrets buying! However, I now REALLY want the bag to match. I have done for years to be honest with you so now that Bazaar Bazaar have now begun to stock it, I think eventually I’ll need to pick it up! My only issue with the bag itself is it’s tiny for the money and it doesn’t close with a zip, just a magnetic button which I dislike. I would want to stitch in a zip so that I had some extra “security” on the bag itself. This being said, this bag would be perfect for evenings out, as well as my holiday in Japan! Maybe I will pick this up if it’s still available at the end of the month. 🙂

This is a Nendoroid figure I pre-ordered MONTHS ago through YY Kawaii! I think I was quite late to pre-ordering, but either way I’m so excited for him to arrive now. As regular (and possibly new) readers will know, I LOVE Persona 5 so when they announced each and every single Phantom Thief, I KNEW I had to have them all in my life. As soon as one is revealed and YY Kawaii has one up for pre-order, I make sure to get my order in straight away. Eventually I hope to show off all my Persona 5 Nendoroid babies, but until I get them all, this won’t be happening. 😦

I am SO excited for this film to come out in less than a few weeks now! I remember going to see it at the cinema the day it came out and how excited I was. I think I was a bit TOO excited, but I don’t care. Pokemon and Ryan Reynolds in the same franchise? I’ve not heard something so great since Ryan Reynolds was confirmed for Deadpool. That was music to my ears! 😛 I already have this pre-ordered, so the day it comes out I’ll be looking forward to putting it on, having some yummy food and watching it again with Dane, cuddled on the sofa. I’ll be making a real couples evening with it.

This is a manga series I love so much and I can’t get enough of it and same can be said for the anime too! I have only just started reading the Elma’s Office series and I love it so much already. Elma is my favourite character from Miss Kobayashi’s Dragon Maid so when they announced she was getting her own manga series, I was so happy! Of course Kanna received her own series, she blew up in popularity after the anime aired. I’ve ordered this volume now, but let me tell you, it wasn’t easy to obtain. I don’t know what it is but Wordery (who are my go to place for cheap manga) didn’t have this in stock and Amazon went from saying 1-4 weeks to 1-2 months! I’ve ordered it through another book retailer similar to Wordery, which is good.

I don’t know what it is, but I really want to start wearing gel nails again. Last summer I bought everything you need to start creating your own gel nails at home and I really loved it… However, the cheap polish I picked up from Amazon is just shite. I recently painted both mine and my mom’s nails and within 2 days they were peeling off for us both. If I’m going to paint my nails with gel myself at home, I would at least link a gel that is GOING to last on my nails and not peel off within a few days… Whilst I want to check out the brand Candy Coat, I also want to check out The Gel Bottle too, as I’ve heard nothing but good things about them. When I had a nose on their website, the first colour I saw on the product list was this gorgeous blue mermaid shade called Blue Hawaiian. It’s gorgeous and I’d definitely love to give it a go myself with this polish. I need to really look into it, as I would like my nails to be done with gel polish for my holiday to Japan. 🙂

So those are all my items from my wish list this month! I semi struggled to get stuff on the list this month. Sometimes I go through phases of I either really want loads of random shit, or hardly anything at all. That is one of those months… A lot of stuff I wanted from last month, I’d still like this month, but of course I’m not going to re-add stuff to my wish list, because that would be boring! 😛

Until next time, I hope you’re all having a great week so far – the weekend is so close! 😀