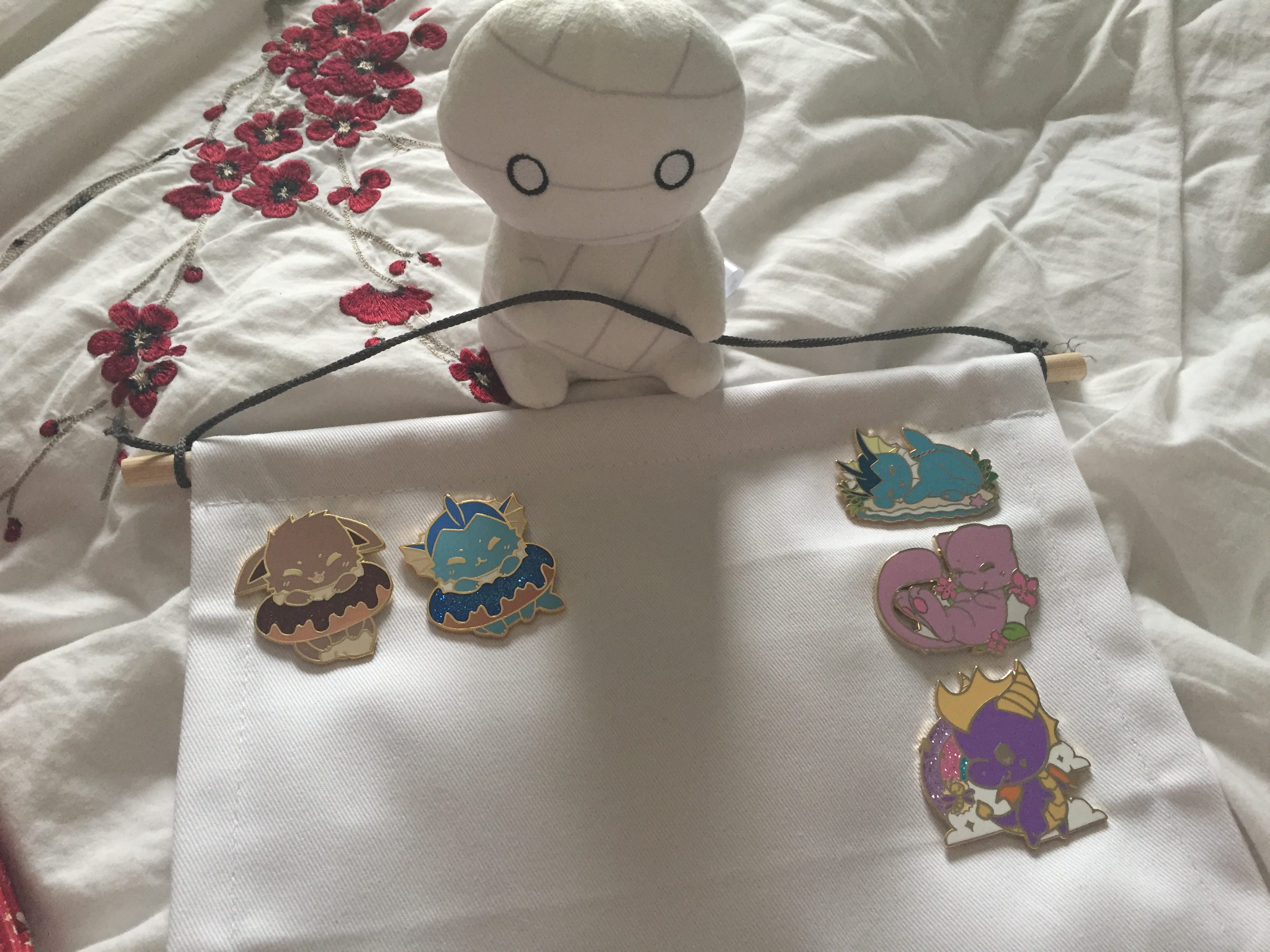 Now in this circumstance I have been meaning to talk about Ohayou Clothing! in general for YEARS now and I honestly mean that! It’s taken me so long to write about this brand and Chrissy the amazing owner because I’ve wanted to make sure what I write and post about her is exactly spot on and be perfect.

I have finally decided exactly how I want to talk about Ohayou Clothing! on my blog and I am so bloody excited to be honest with you! I’ve been working on this blog post mentally for months now, since the Eeveelution Kickstarter launched in March.

Instead of talking about any of the clothing I own by Ohayou Clothing!, I thought I would start on my ever growing pin badge collection and at the moment Ohayou Clothing! is dominating my pin flag… Soon enough I’ll have to get a separate pin flag purely for her marvellous pins.

ANYWAY enough chin wagging, it’s time to FINALLY get on with my first (of I’m sure many) Ohayou Clothing! post!

When Ohayou Clothing! announced her Sleeping Eeveelutions Kickstarer campaign I was so excited and made sure to back her campaign as soon as I could! She had a few issues with her Kickstarter due to copyright issues with Nintendo and Pokemon and it had to be frozen for a while. However, it was all sorted in the end and her Kickstarter continued and it did so well. I’m so proud of how much she made with the campaign! It’s definitely a Kickstarter I’ve had a pleasure being a part of. 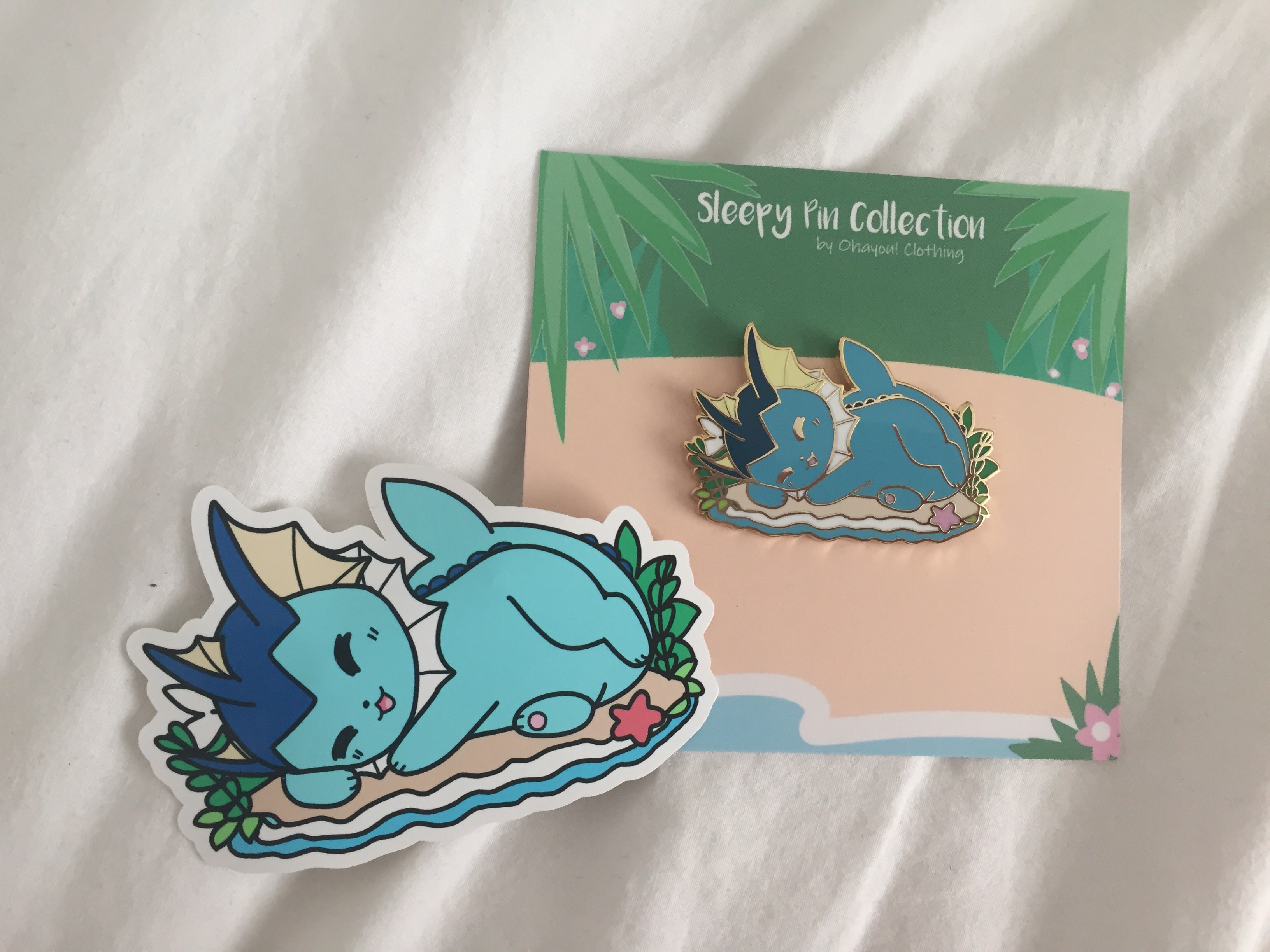 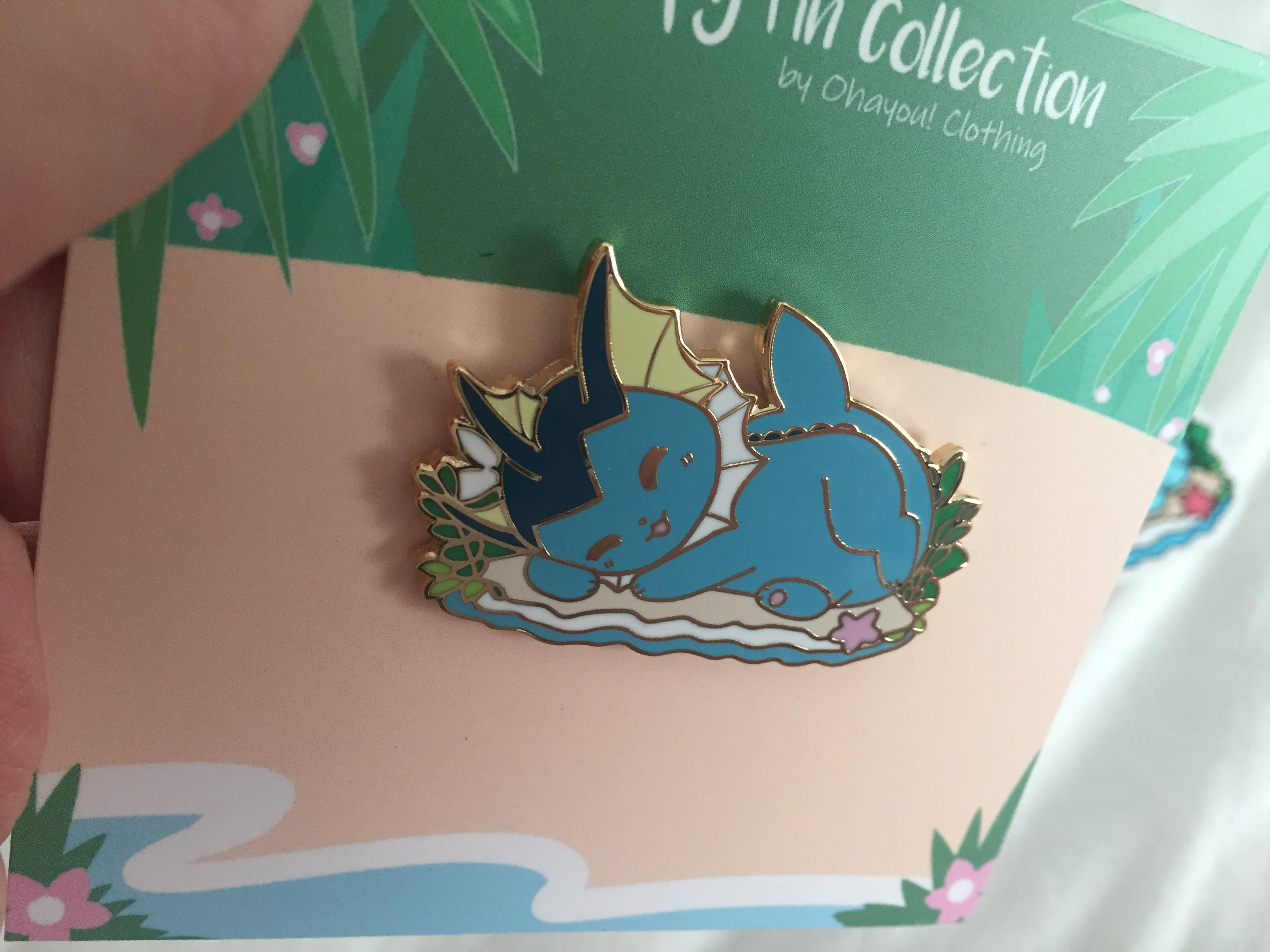 When the campaign came to an end, it was time to decide which pin design you wanted and the one I settled on (after a bit of a struggle) was the sleeping Vaporeon pin. It’s so adorable and cute! I love how all of the sleeping Pokemon pins have themes based on their type. Of course Vaporeon being a water Pokemon it’s sleeping on a beach. It was tough to be honest having to pick just one pin as my reward (I only opted to back one as my pin obsession was pretty nonexistent then…) only allowed me to have one pin. I just love Vaporeon though and the beach scene reminds me of Fuerteventura, which is my second home.

After these pins were released and sent to their new owners, Chrissy opened up a secret shop on her store for people to come and buy brand new sleeping Pokemon pins, as well as seconds pins.

Seconds pins are pins that have been sent with issues, such as wrong colour, marks on various parts of the pin and basically just anything wrong with the pin that you can think of! 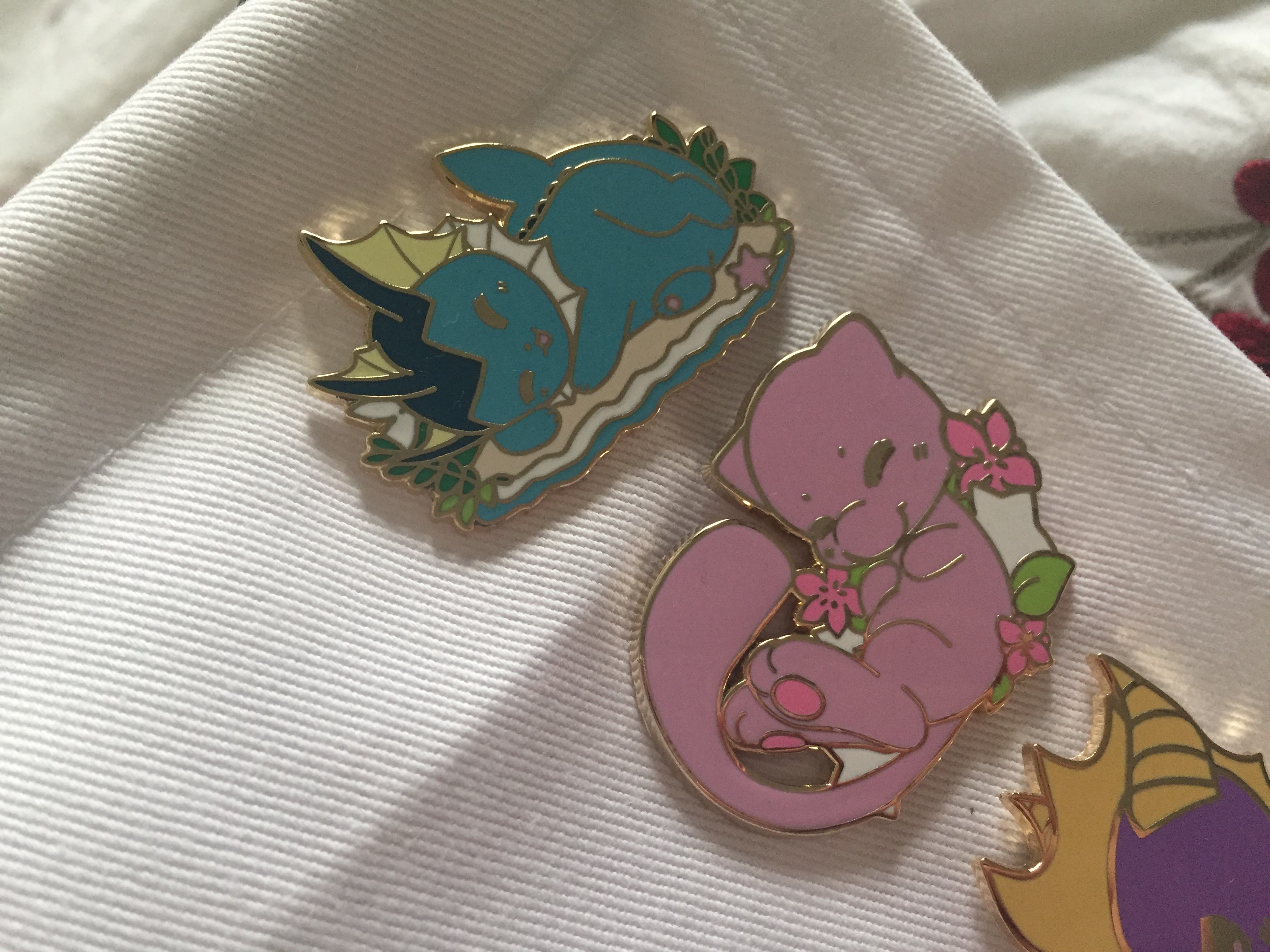 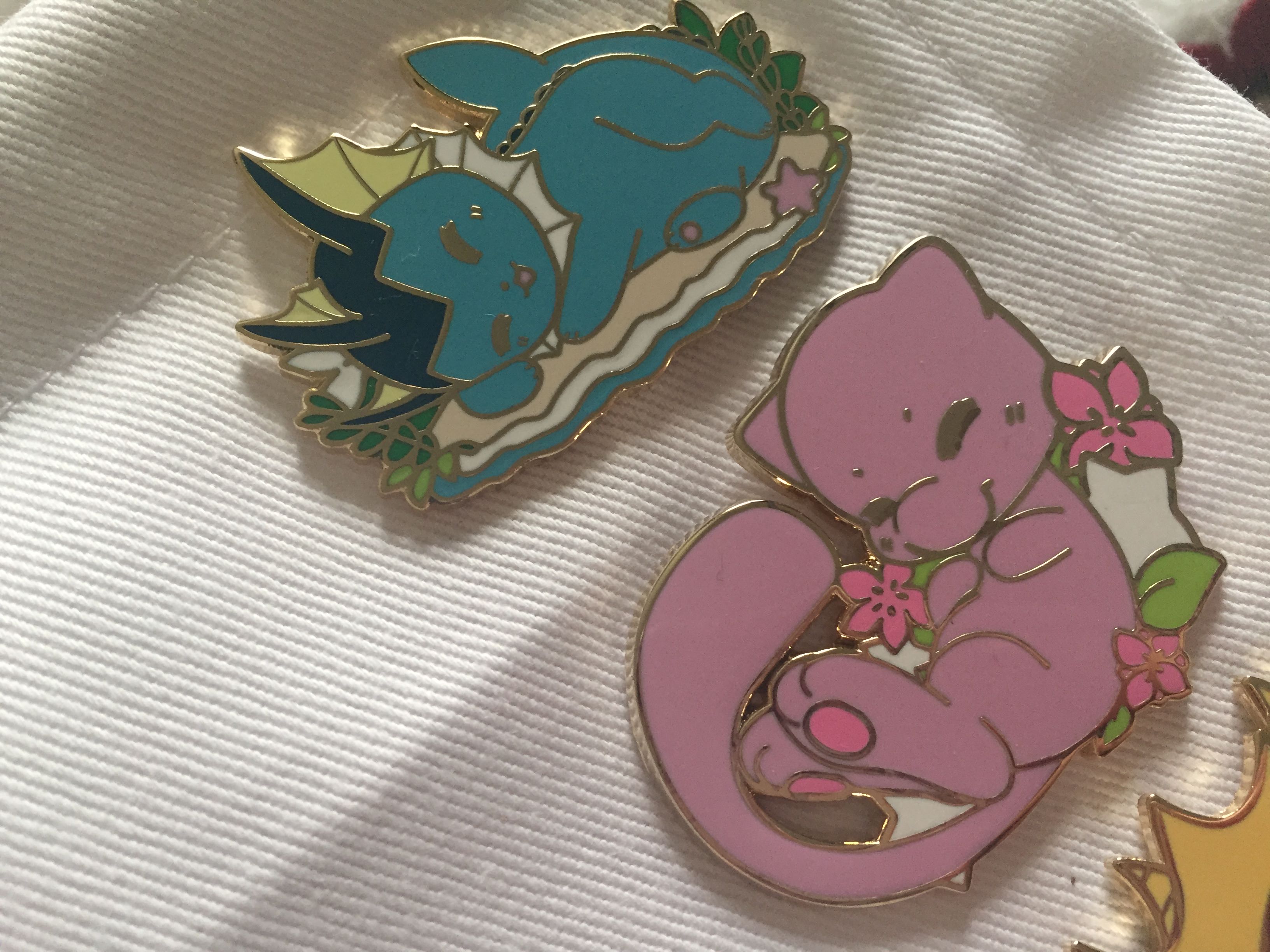 Although I had my heart set on the Vaporeon pin all along, I did fall in love with the Mew pin that was brought out as the first unlocked reward. So when Mew came out as a seconds pin, I knew I had to order! It recently arrived in the post and I have to say, I wouldn’t even think it was a seconds pin! It looks just as good in quality as the Vaporeon pin, as well as some other pins I own by Ohayou Clothing! The one thing I love about the Mew pin is that it’s surrounded by Japanese sakura (well it looks like that to me anyhoo! :P) and it’s just so cute! I can’t wait to wear it throughout winter to be honest with my cream jumper. 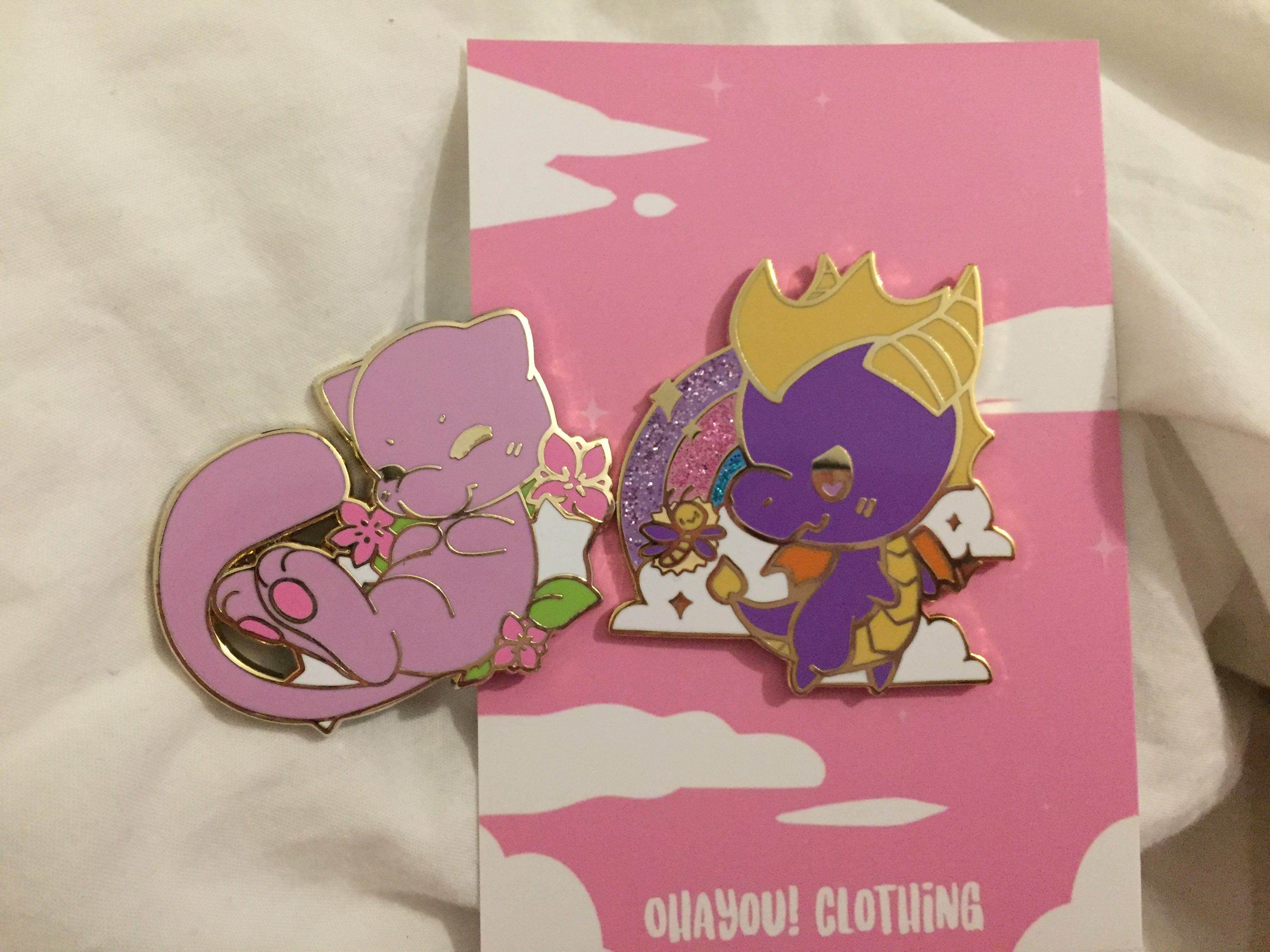 When I ordered my Mew pin I decided to order the Spyro pin that Ohayou Clothing! designed recently. I wasn’t going to to be honest as the smart adult in my brain was saying, “No Nat, you don’t need that!” whereas the nostalgic youngster in my knew she had to have it.

Spyro is a massive part of my gaming life as I used to play it when I was younger during the summer holidays with my cousins. We’d take it in turns to go around each world and attempt to complete them 100%. I loved it! 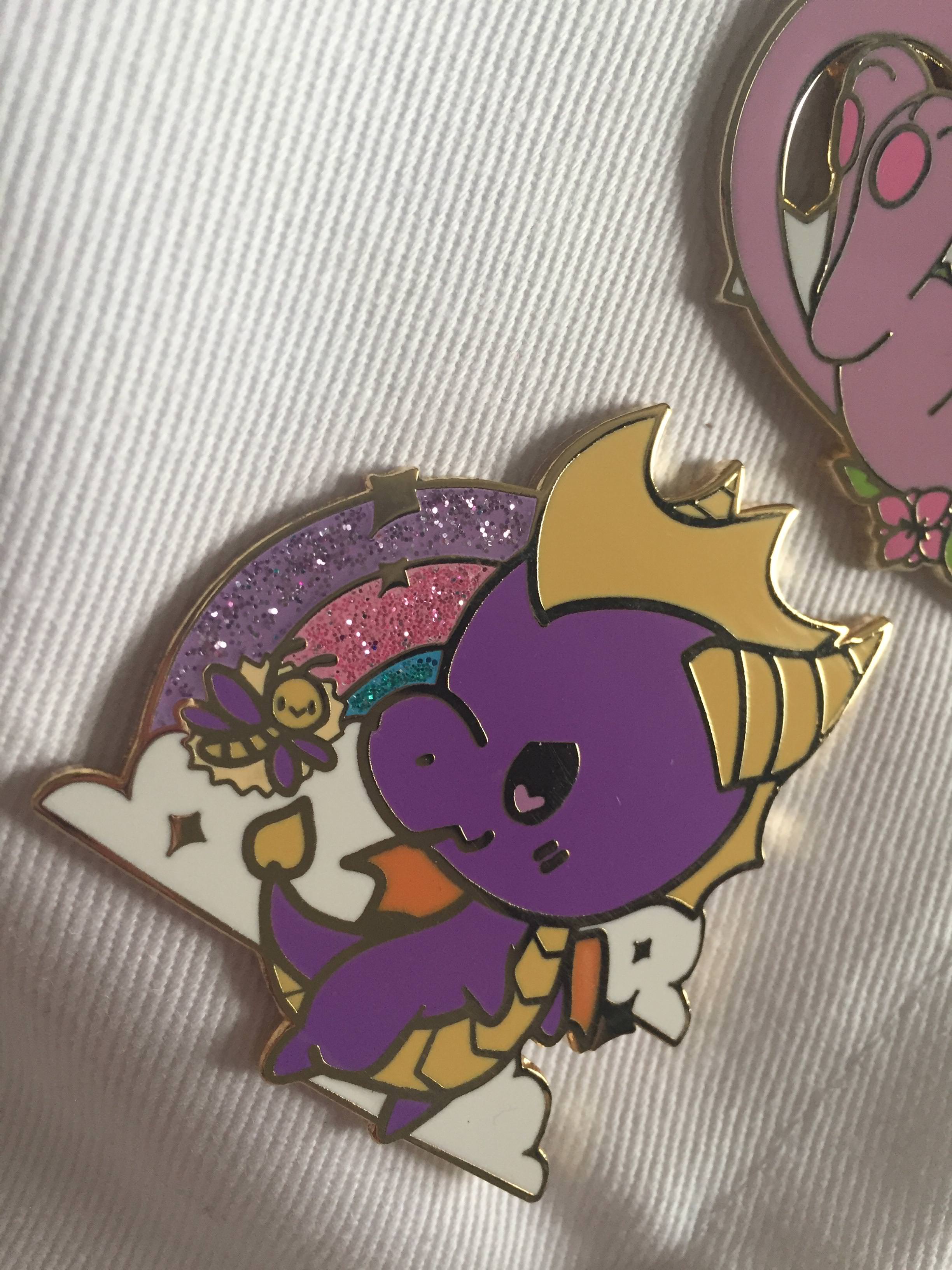 So I knew I needed the Spyro pin badge in my life! It’s so adorable and I cannot wait to wear it over the summer and winter months for work. The remastered Spyro games are out in September so I’ll be rocking this pin on jumpers throughout that month for sure.

The thing I love the most about this design is how much of a rebel Spyro STILL looks, whilst giving the pins design a cute kawaii feel. Also, look at that glitter, it’s so fabulous! 😀 I know not everyone knows what half of the Pokemon are anymore who are out, but everyone who was around in the 00’s will know who Spyro is. 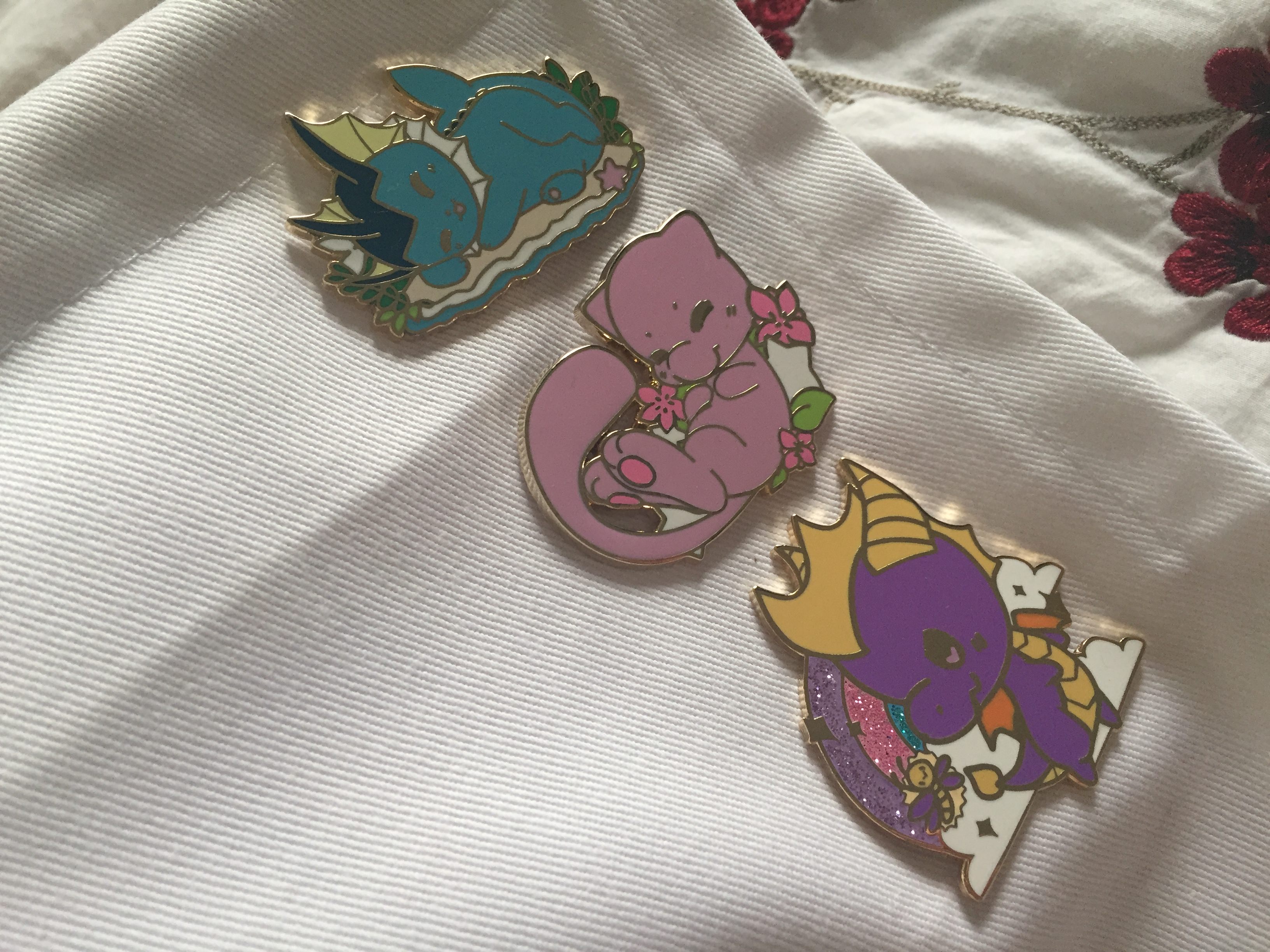 Like when the Kickstarter was around, Nintendo and Pokemon have got to Ohayou Clothing! again and told her she has to stop making and selling Pokemon designs. I am gutted to be perfectly honest with you. Due to this, the Vaporeon pin will be the last Pokemon pin for the Pin Dream pins. I was so excited for the rest of the Eeveelution doughnut designs to come out, but that aside I’m angry on behalf of Chrissy. There are plenty of other people out there who are inspired by Pokemon and their designs to create their own designs and images of certain ones. There are loads of Kickstater campaigns out there that are producing Pokemon inspired pins, as well as hundreds of Etsy stores and even Redbubble. So why is Ohayou Clothing! getting it and no one else appears to be? Well, yet anyway.

Either way I will continue to support Ohayou Clothing and Chrissy with her store, as well as with her future Pin Dream designs! 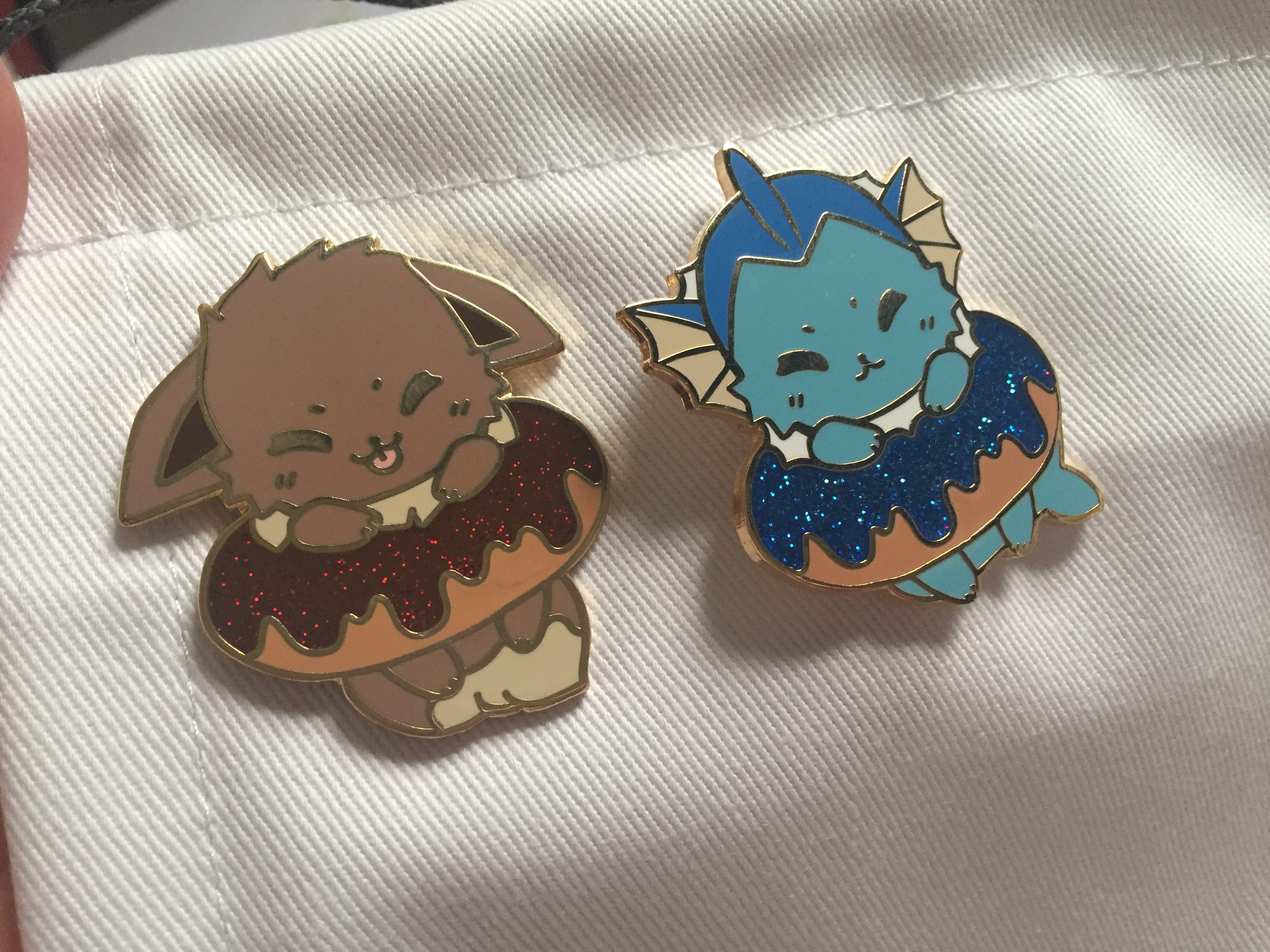 For now though, I will talk about the first two pins she came out with for her Pin Dream Patreon. They’re both Pokemon pins and I love them so damn much, as I said, I’m just gutted I won’t ever be able to own all 9 pins. 😦 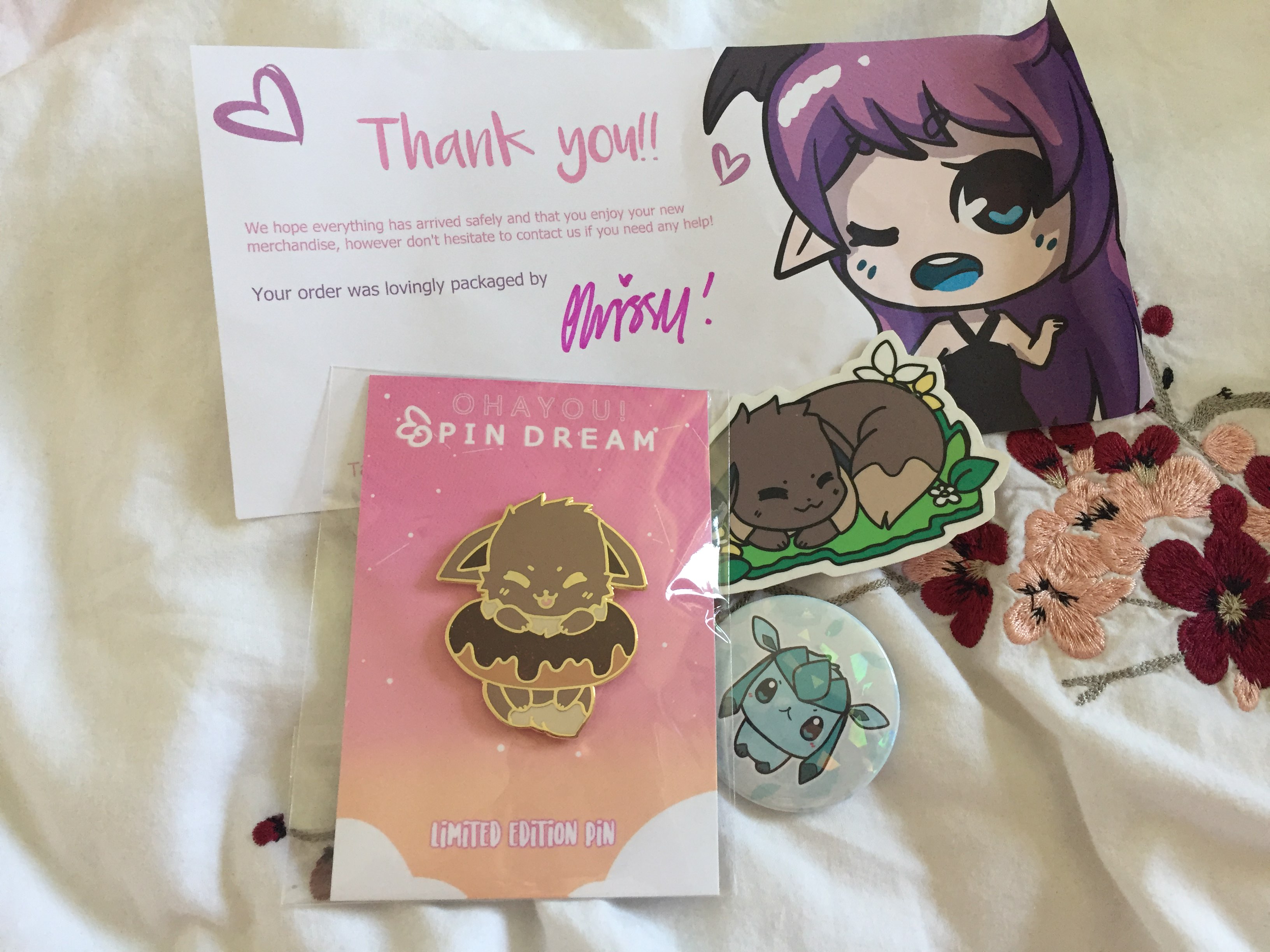 The first pin was an Eevee doughnut pin and I knew I wanted it so much! The design of it is adorable, from the sparkly brown doughnut, to the fluffy tail dangling down, and the adorable little tongue that Eevee is sticking out. There is nothing wrong with this pin and it definitely ticks all the KAWAII boxes.

Chrissy always packages all her parcels perfectly and with the Patreon Pin Dream’s you get a couple of little extras too as a thank you for supporting her. With the Eevee doughnut I got a sticker of Eevee sleeping as well as a Glaceon badge. 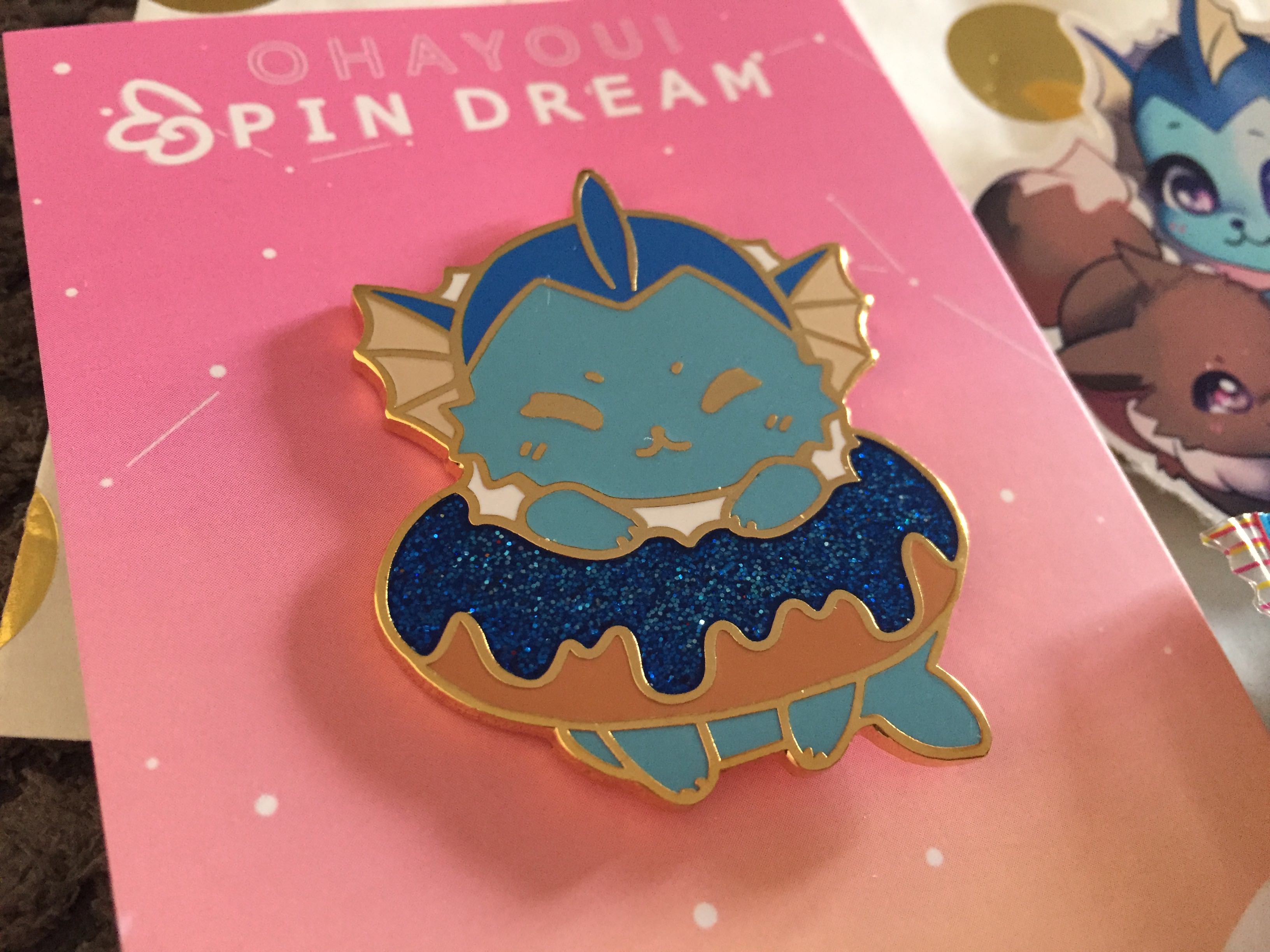 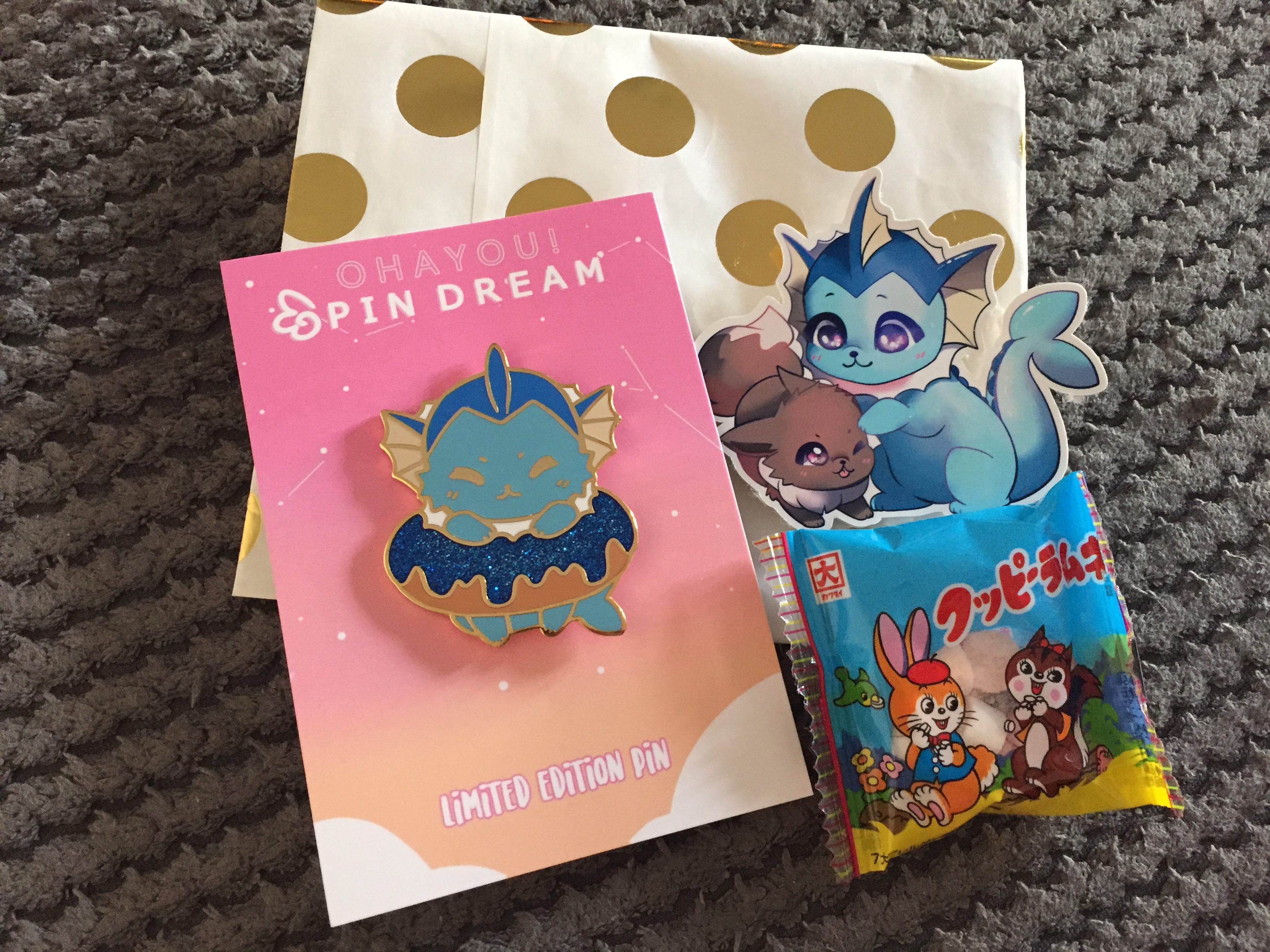 The second Pin Dream is the Vaporeon doughnut and sadly I haven’t had the chance to wear it and show it off yet. This only arrived recently but I’m sure I’ll wear it at some point soon for work or in general. This pin is just as gorgeous as the Eevee one with the blue glitter doughnut this time. Not going to lie the Eevee pin is definitely cuter than Vaporeon, but the blue makes up for that! 😀 This will be lovely to wear on my red coat during the winter season.

Like with the Eevee pin (as well as all of her packages to be honest…) the Parteon package for Vaporeon came with some lovely little extras again, including an Eevee and Vaporeon sticker, as well as some Japanese candy, which was really yummy. 😛

So, that’s my pin collection from Ohayou Clothing! so far.

I am gutted about the whole Pokemon palava with Chrissy, especially considering she had so many cute ideas coming up with Pokemon, including Cubone and Dragonite, which I was excited to get during her designing stages.

I really hope in the future that Nintendo and Pokemon chill out and allow Chrissy to continue being amazing. OR they could just offer her a job to designs some new merchandise for the Pokemon Centre in Japan. 😛

What do you guys think of Ohayou Clothing’s! cute pin badges? 😀 Which do you like the most? Maybe you already own some of her merchandise! She doesn’t just design pins, she designs clothing, as well as homeware. I live in my Eevee and Umbreon varsity jackets when it isn’t hot! 😀

Let me know in the comments what you think of Ohayou Clothing! AND if like me you don’t agree with how Nintendo and Pokemon are treating her, then join me in talking about it online on Twitter and Instagram.

Oh by the way, do you guys like my little Mii Kun that has recently come into my life? 😛 I’ll be talking about him properly soon, but I love him so bloody much! He’s from the anime How To Keep A Mummy, which you should watch if you love cute anime series. 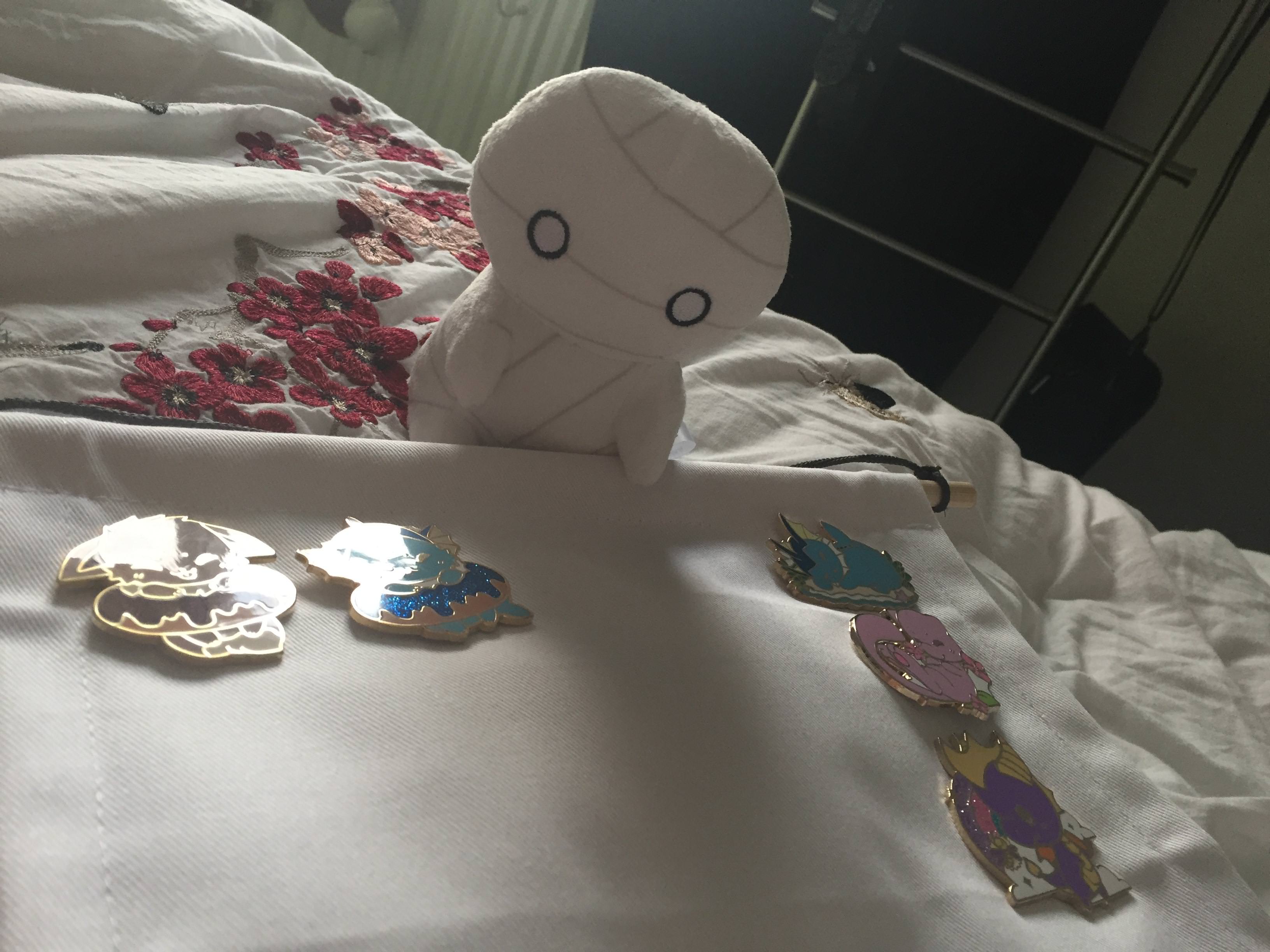 He looks so realistic here. I love the plushie so fucking much and I really hope to feature him more when it comes to talking about anything kawaii and Japan related. 😛

Anyhoo, until next time I hope everyone had an amazing weekend!