I know I say it every month, but how are we already into April? Especially the first proper week of April too! Before we know it, it’ll be May and I’ll be repeating myself all over again. 😛

I’m not going to lie, I really did struggle with my wish list this month due to just not feeling like there’s a fat lot I want to buy? I’m still trying to be really good with money and with Dane’s birthday next week, I’ve been focusing on spending any monies I have like that, on him. That being said, I did manage to get some items to talk about this month with a mixture of pre-orders, items I hope to buy at the end of the month, as well as a special item I’d really love and will speak about at the end… 😛 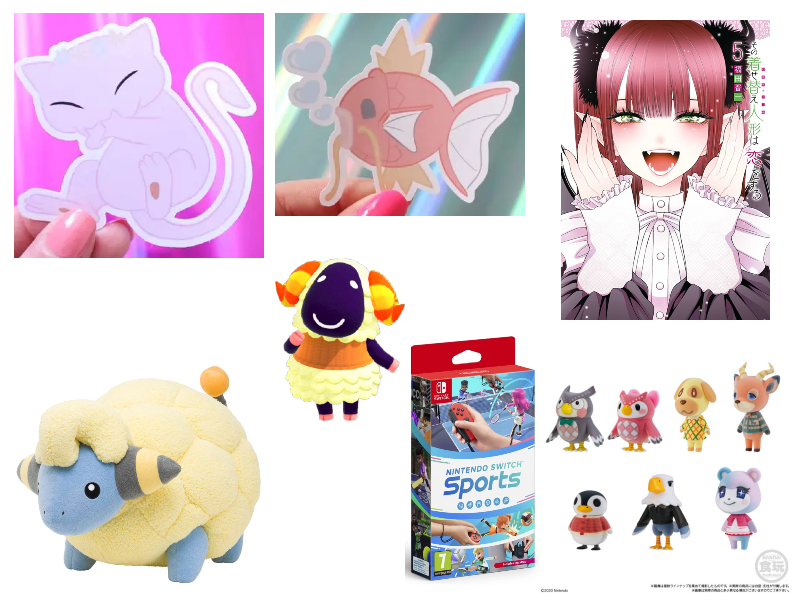 The first item I’d like to talk about on my wish list is my friend Emily’s sticker store, Totally Emily Designs. Currently she’s only stocking glossy stickers and sticker sheets, but I wouldn’t be surprised if she has more ideas for the future! This being said, I definitely have some stickers from her I’d love to get to decorate my water bottle, but especially Magikarp at the moment! It’s such a cute design and would work perfectly on my water bottle for sure! 😀 Also to add here, Emily isn’t just a friend but she’s also a blogger like me! Make sure to go and check out her blog Totally Emily.

First and foremost, I pre-ordered these back at the end of November 2021 and the past four months since then have really flown! You know when you order something you find yourself saying, “Urgh that’s going to take an age to wait for!” and then before you know it, the item is due! 😛 Edit, that being said literally 24 hours before this post was due to go live, I was told these won’t be out until May now… 😦 Anyhoo, I’m super excited for volume 3 of the Animal Crossing friend dolls to arrive, especially as they’re the cutest volume yet! However, I’m not looking forward to finding out how much it’s going to cost to ship the cuties to me! If you weren’t aware, currently Japan has suspended Airmail due to the war between Russia and Ukraine, which is fair. This being said, surface mail is still available, which is the cheapest but also the worst! You’ll be waiting up to three months for your goodies to arrive. Thankfully there is the DHL/FedEx option, so I’ll definitely be going for this and this is where my original however came in. I’m just hopeful it isn’t going to cost me a bomb! This being said, I’m so bloody excited for these to arrive! Goldie and Judy are definitely my favourites.

As regular readers will know, My Dress-Up Darling has really grown on me (you can read how and why here) and I really adore it as both a manga and anime. I pre-ordered volumes five and six a month ago and according to where I pre-ordered, volume five is due out at the end of the month, which I’m really excited for! I feel like I can’t get enough of this since the anime’s first season concluded at the end of March. I’m waiting for all the dubbed episode to release so I can binge watch them all. xD Sad? Yes? Do I care? Not really.

This is something I’m planning to treat myself to as soon as April payday comes around at the end of the month. I own one piece by Nooks Needles Co already, my Cookie sweater and I adore it! I own an Animal Crossing stitched t-shirt by another designer and wear it to work often as it isn’t obvious it’s Animal Crossing. Due to this, I’d love to get another! This time, I’d like to get a navy t-shirt with Vesta the sheep villager on the left hand side. Vesta is one of my favourite villagers, even though I don’t shout about it! She was the first sheep villager I met and personally I love her. I never invited her to my New Horizons island as Dane had her on his, so instead, Eunice (also a sheep villager) came to live on my island instead. This all said, I really wanted to pick up the t-shirt sooner, but I’d rather spend that monies on Dane. I can wait. 🙂

Okay, raise your hand if you loved Wii Sports… Most of you probably did, didn’t you? I know I did, especially the bowling game. I was obsessed with it growing up and when I met Dane and found out his family owned a Wii, I was ecstatic! Years have passed since I last played it (not going to lie haha) and finally we’re getting the same game (pretty much…) for the Switch! I’m going to pre-order it soon ready for the end of the month when it launches. My dad always loved the bowling game too, and only over Christmas did he ask if we could put it on to play. Now we can easily with it being on the Switch, which in itself makes me happy.

Okay, so this is the item I said I would save for the end to speak about! I would really love the life-size Mareep from the Pokemon Center, and now we have the UK one to buy from, I’ve got even more chance than ever to make this dream come true! However, it is over £400… Which is a lot of money! I’ve decided that I’m going to save up for it over the next couple of months and get it at some point in the near future. In all fariness, I may save up for it, only to change my mind later on, but at least I’ll have some extra savings, I guess?

So, there we have it guys, my wish list for this month! I know it wasn’t anything special and if anything, it was probably incredibly underwhelming, but it is what it is and I enjoyed writing the post.

What do you guys have on your wish lists this month? Anything nice you’ve treated yourself to this month? Make sure to let me know in the comments!

Until next time all, take care and I hope you’re having a lovely weekend!