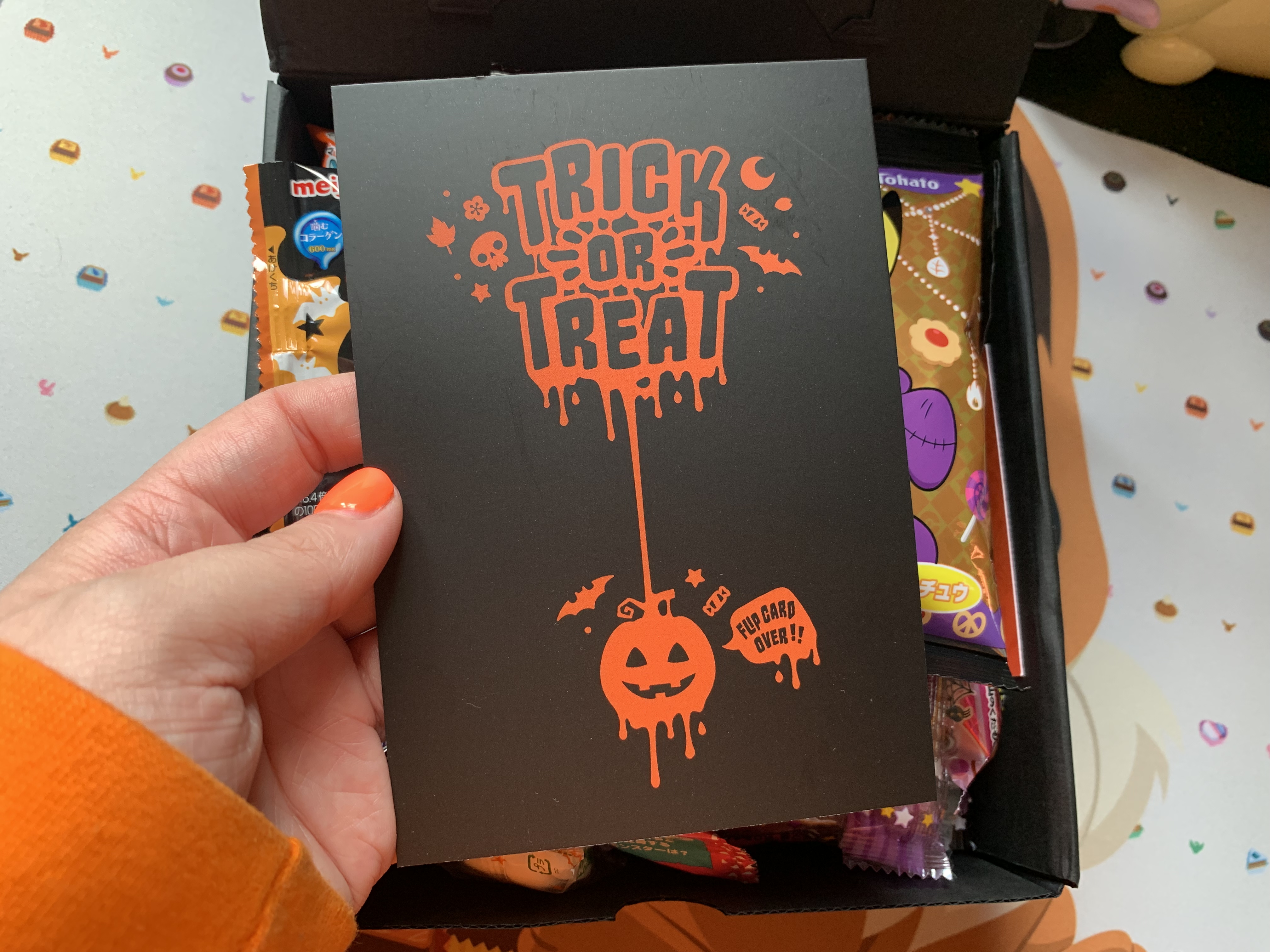 I’ve always meant to share with you guys the candy boxes I pick up from Something Japanese, but me and Dane always end up eating the contents before I can even take photos FOR a post. Alas, that hasn’t happened this time, we’ve held off snacking on any of the Halloween goodies until next week and the weekend of Halloween. So, I really hope you enjoy this post today and look at snagging one of the Halloween Candy Boxes for yourselves.

This year Something Japanese have added more to their Halloween Candy Box than ever before, with over 35 Halloween themed treats inside. The box costs £34.99, but I snagged mine for cheaper due to a discount code. From memory due to being signed up to the newsletter, I have a feeling this is why I received a discount code. So many sure to sign up for the newsletter if you’d like to order any of the candy boxes in the future.

Before I share all the goodies we got inside out Halloween Candy Box, I want to share the monthly Japanese candy box that Something Japanese do! It’s call AmaiBox, which I’ve tried before and is by far one of the best monthly boxes I’ve tried to date. The AmaiBox comes in two sizes, Giga (from £28 per month) and Mini (from £20 per month) and you can choose to order the one month or three month subscription. Depending which box you pick up you’ll receive Japanese candy such as:

Candy bags, which could include Puccho (which I LOVE).

Popular snacks such as Japanese Kit Kat’s, Pocky, as well as Nintendo characters.

Japanese drink (only in Giga), which could range from ramune soda, canned coffee, or maybe even Japanese flavours of Coca Cola or Pepsi.

So if you are interested in that, make sure to check out the link I shared previously!

To add here by the way, Something Japanese don’t just create and sell Japanese candy boxes, they do also sell Japanese products range from food and snacks, anime/pop culture figures and merchandise, as well as traditional Japanese gifts. I discovered them at Hyper Japan back in 2015 and have been shopping with them ever since! So, do make sure to go and check them out if you fancy picking up some yummy Japanese snacks.

Now I’ve gone through the AmaiBox, let’s show off the goodies we got in our Halloween Candy Box! 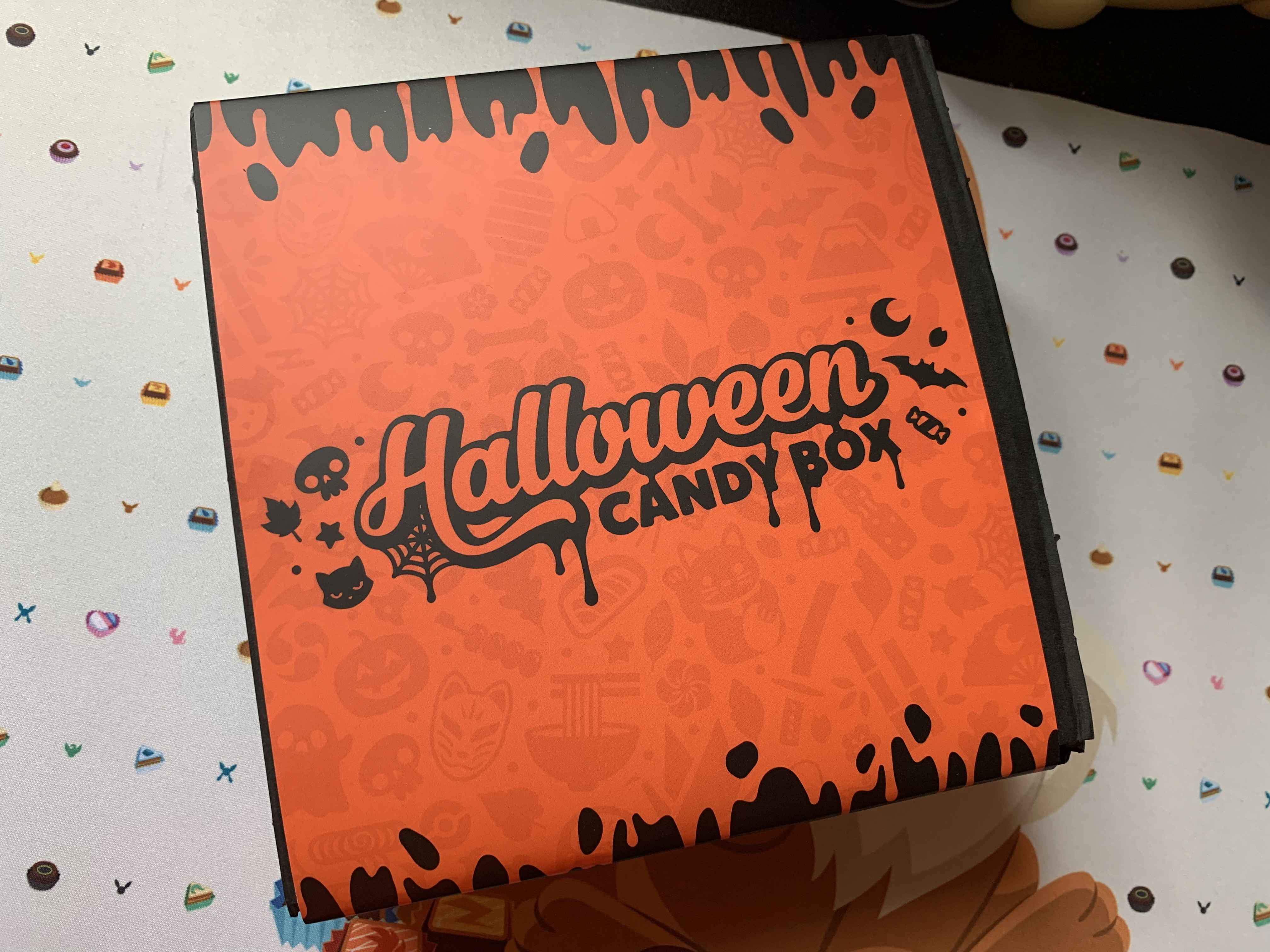 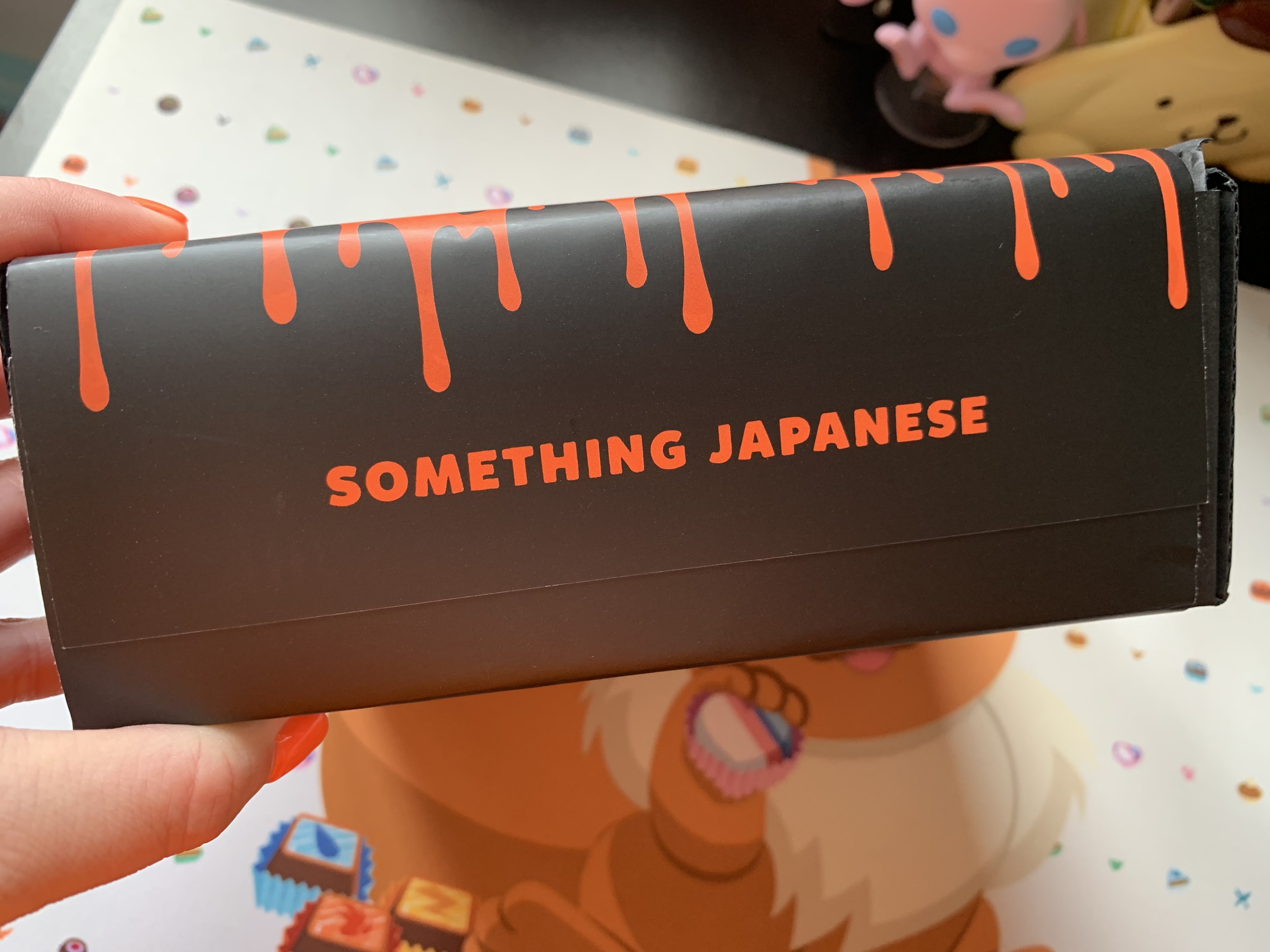 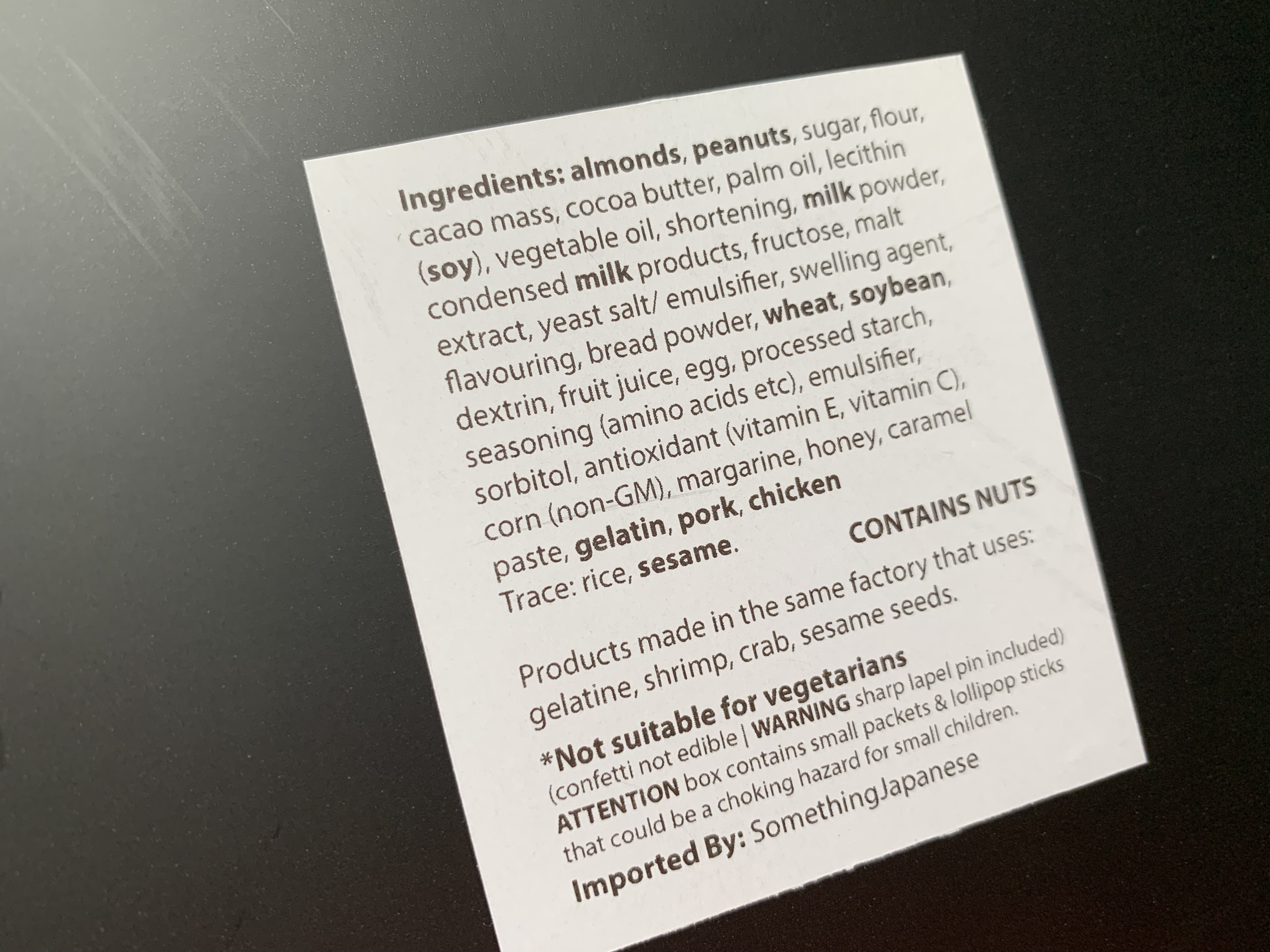 Last year Something Japanese brought it with their box design and this year is no different. The box has a cardboard sleeve around it which is orange and black, with the name of the candy box, as well as the company name on the front and back of the sleeve. I was so excited when I opened the parcel it came in. On the bottom of the sleeve it does give you some ingredients as well as warnings, which I’ve shown above. 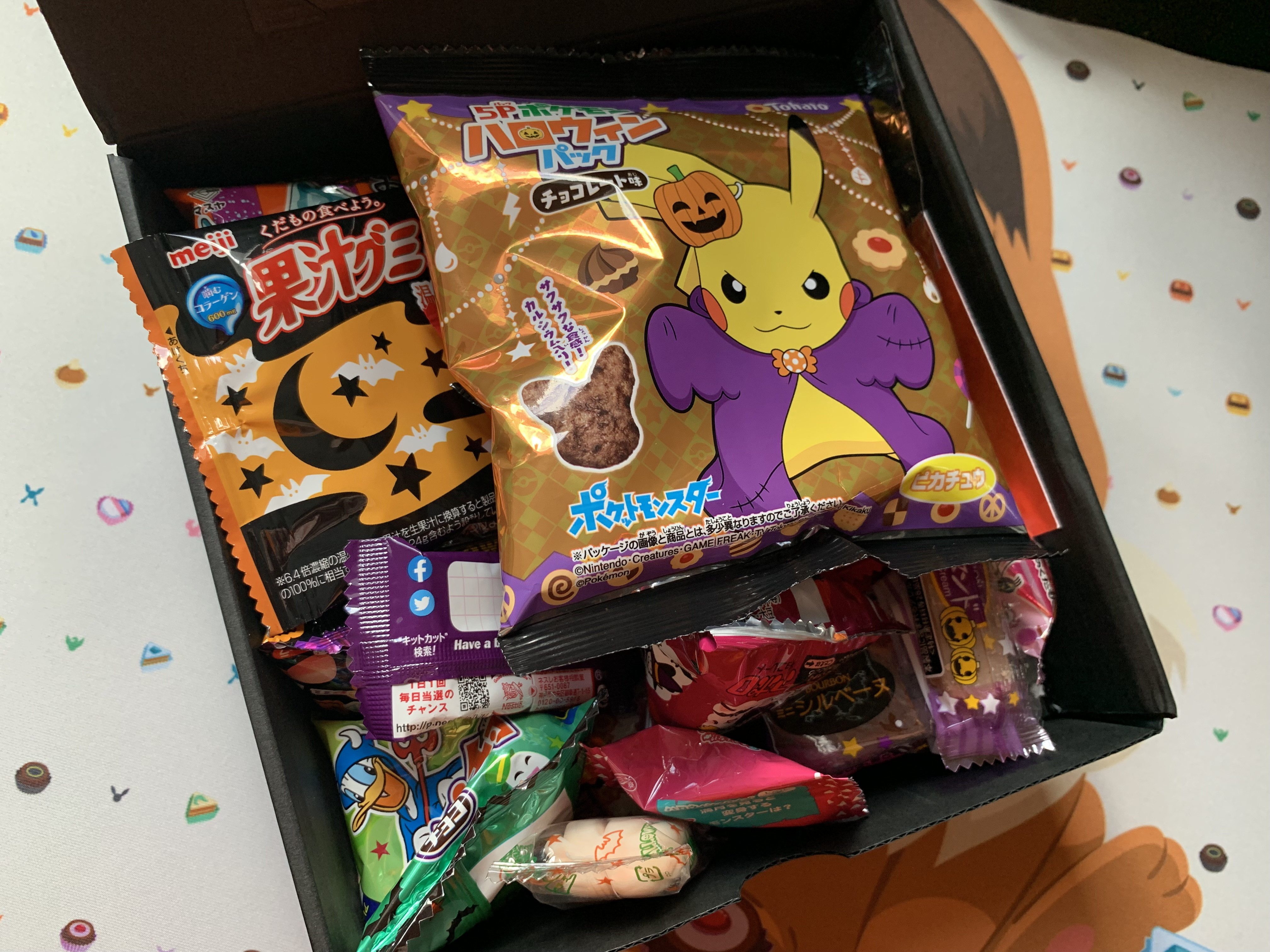 One thing I love about the Japanese snack boxes from Something Japanese is although the box is simple, you open it up and the goodies are displayed nice and neat and ready to eat! Oooft, I love that. 😛 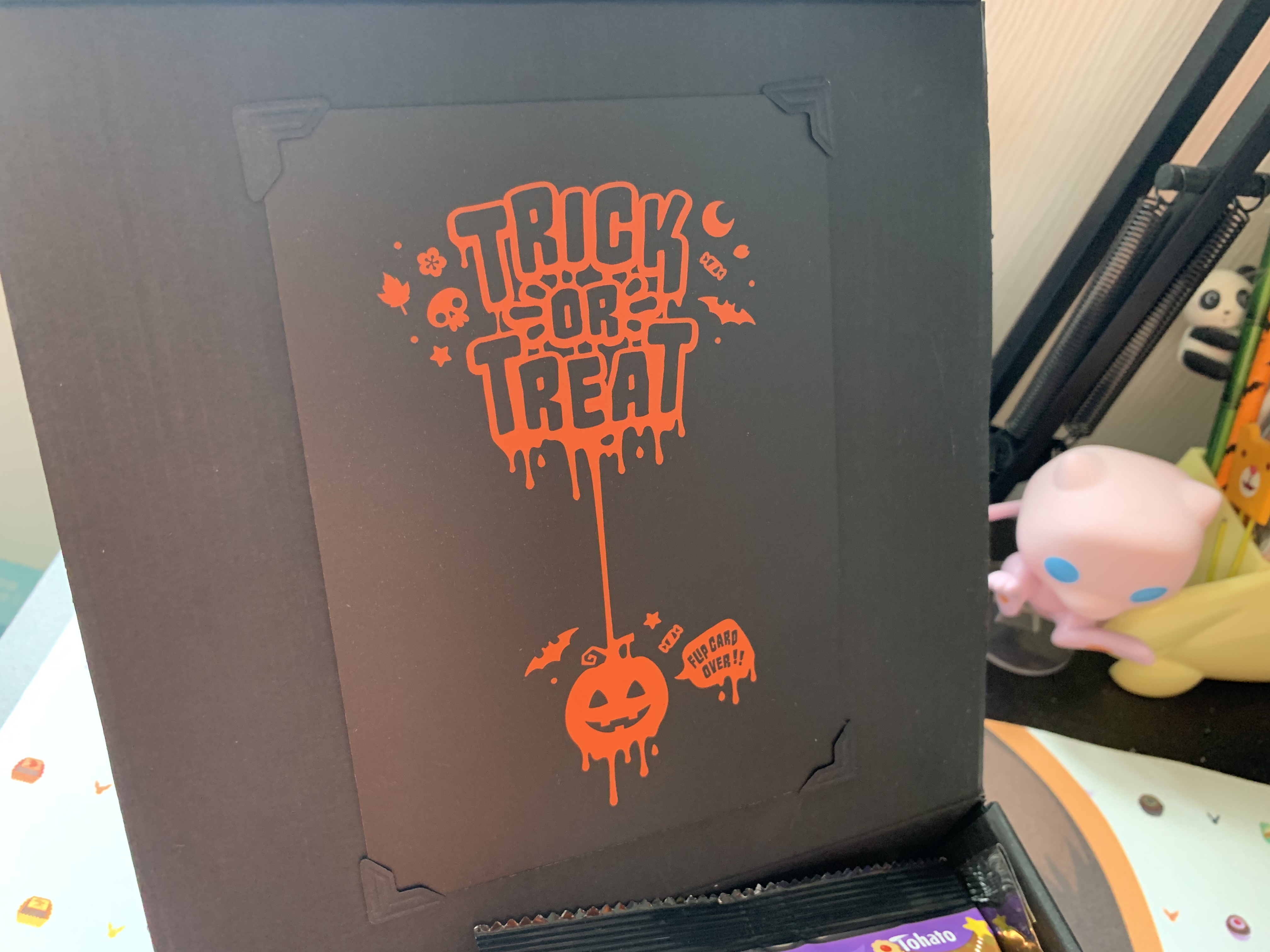 On the lid of the box when you open it there is a postcard, which has a spooky trick or treat logo designed and a pumpkin, which asks you to turn over the card. I won’t show what is on the other side as there is an exclusive discount code for the Christmas Candy Box! I’ll definitely be ordering the Christmas box when it’s released, as I did last year and really loved it. If you guys would like to see me share the Christmas box after reading this post, please let me know in the comments! 🙂

Anyhoo, it’s time to get into the goodies we’re all ready for! If any of these items are available on the Something Japanese website, I’ll make sure to link them. 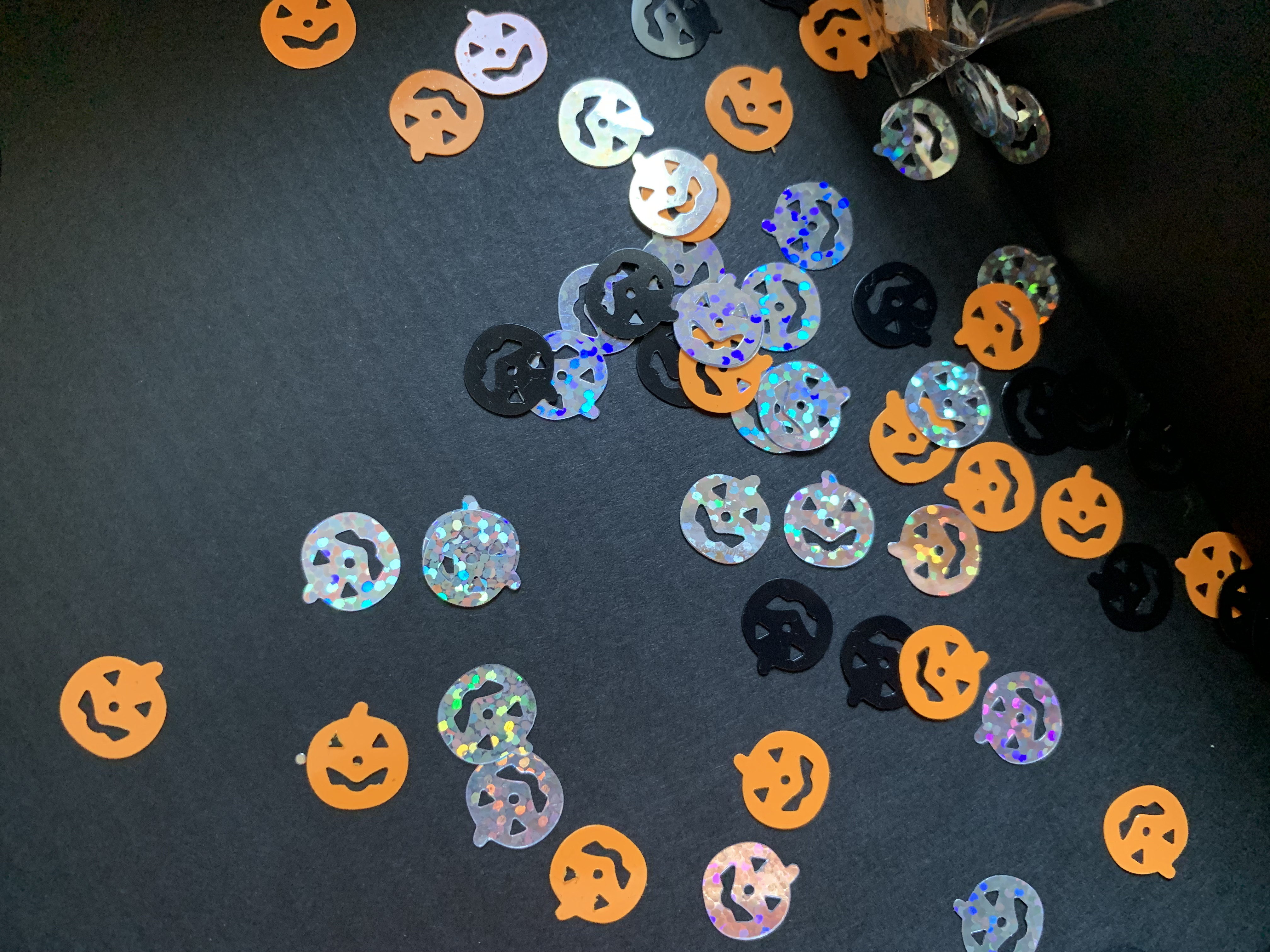 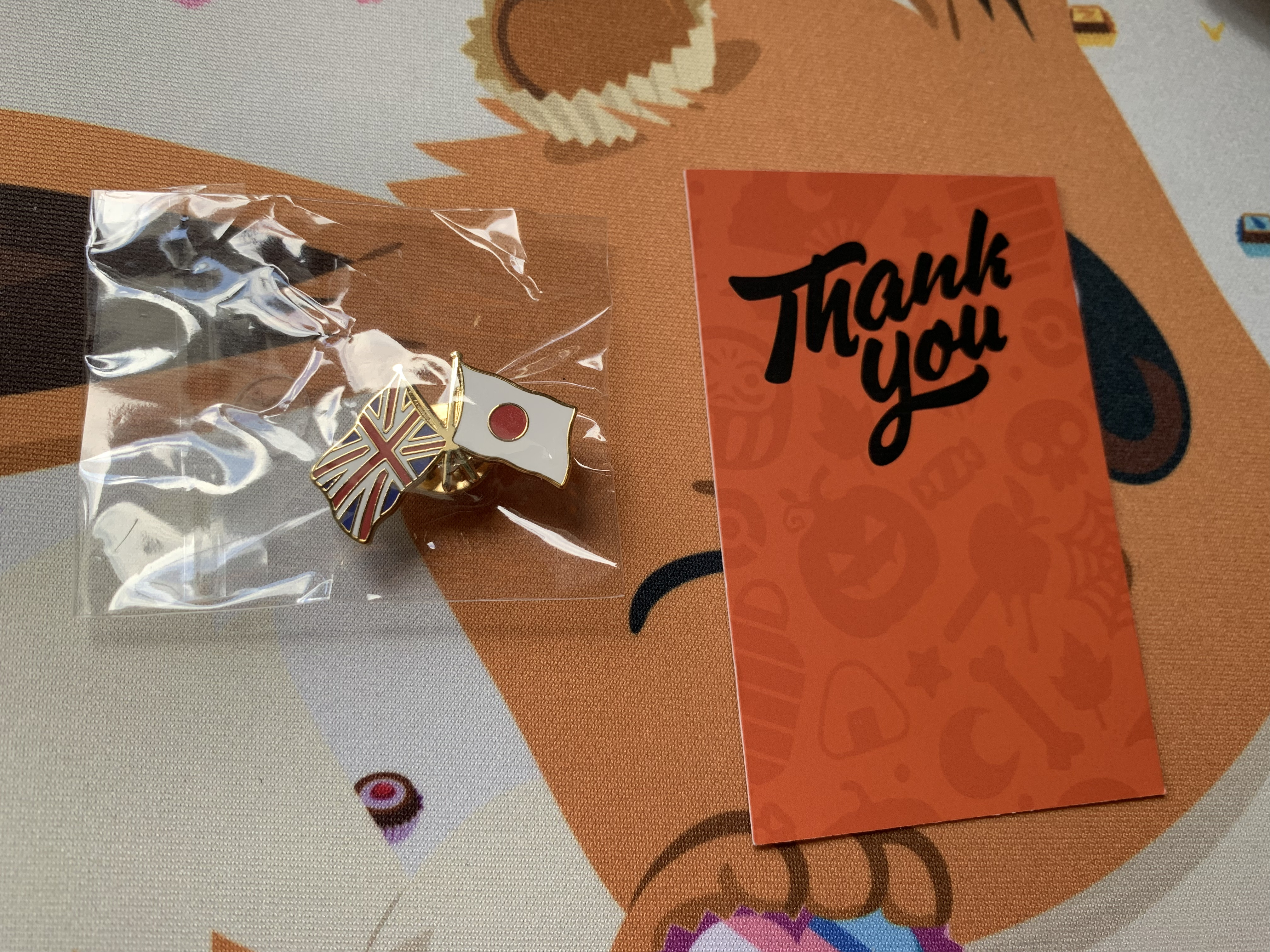 The box itself is FULL of Halloween pumpkin confetti which is so damn cute! I want to keep hold them to use in some crafts, but I probably won’t. 😦 There’s also an enamel pin in here of the United Kingdom flag and Japanese flags together, as well as a special little thank you card. 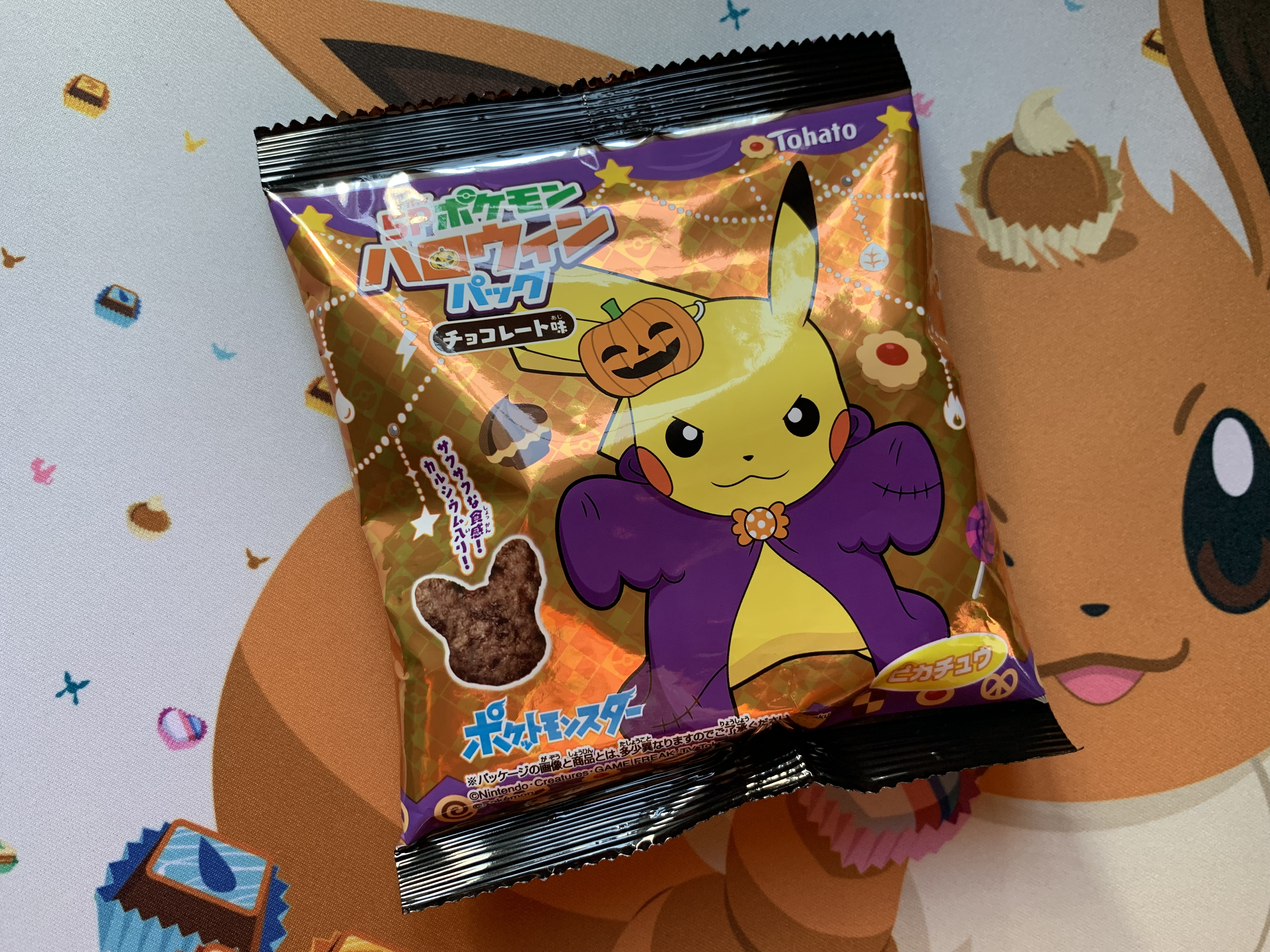 Tohato Pokemon Chocolate Flavoured Corn Puffs – These are available all year around in a standard packaging, but I love that they’re out in a limited Halloween bag too! So cute! 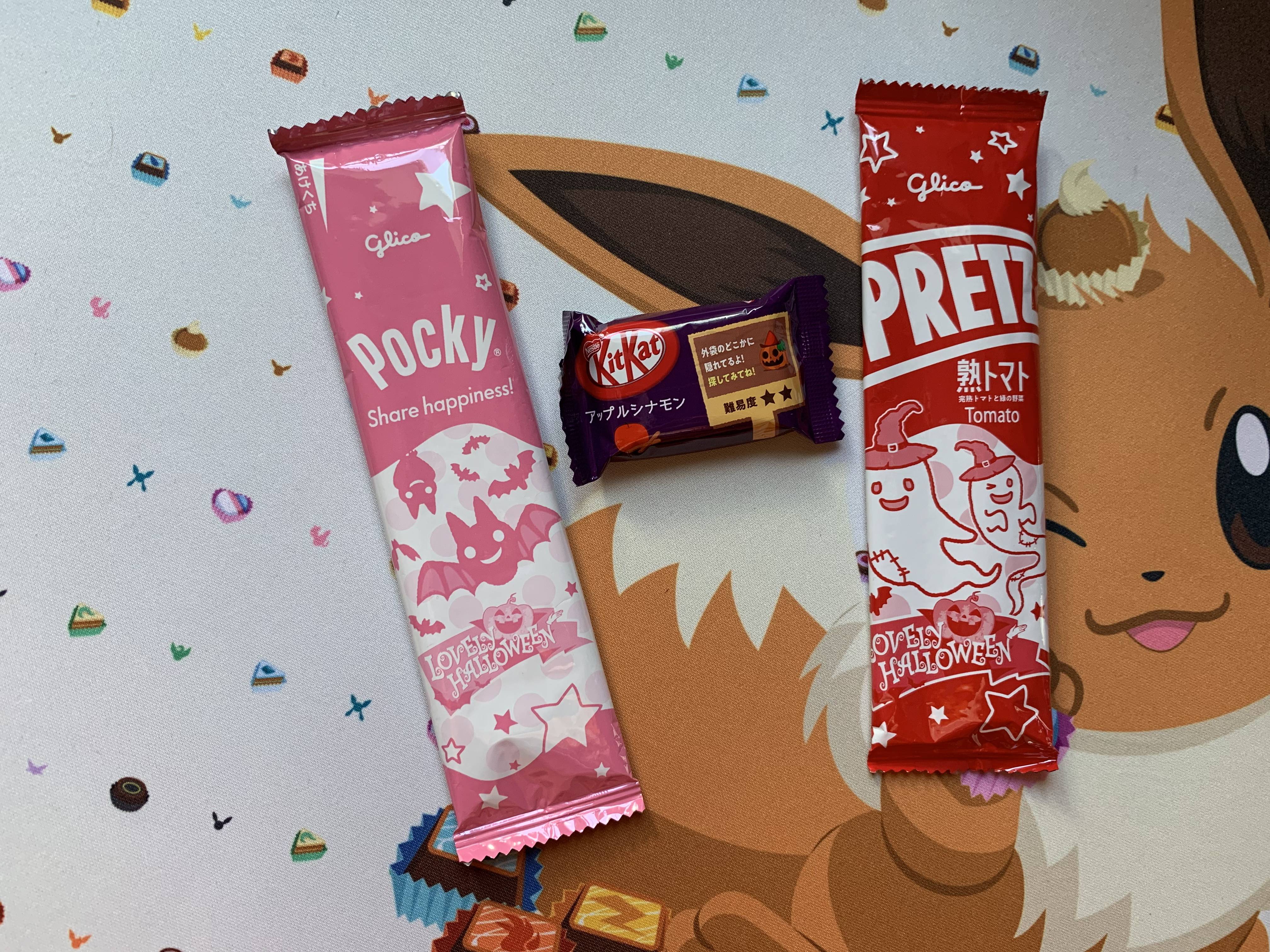 Pocky, Pretz and Kit Kat – You always get some of these snacks in these boxes, which I always love and enjoy! This year it looks like we have strawberry Pocky and tomato Pretz… Not sure how I’m feeling about the latter! We also have cinnamon and apple Kit Kat which you can buy on Something Japanese’s website here and here. 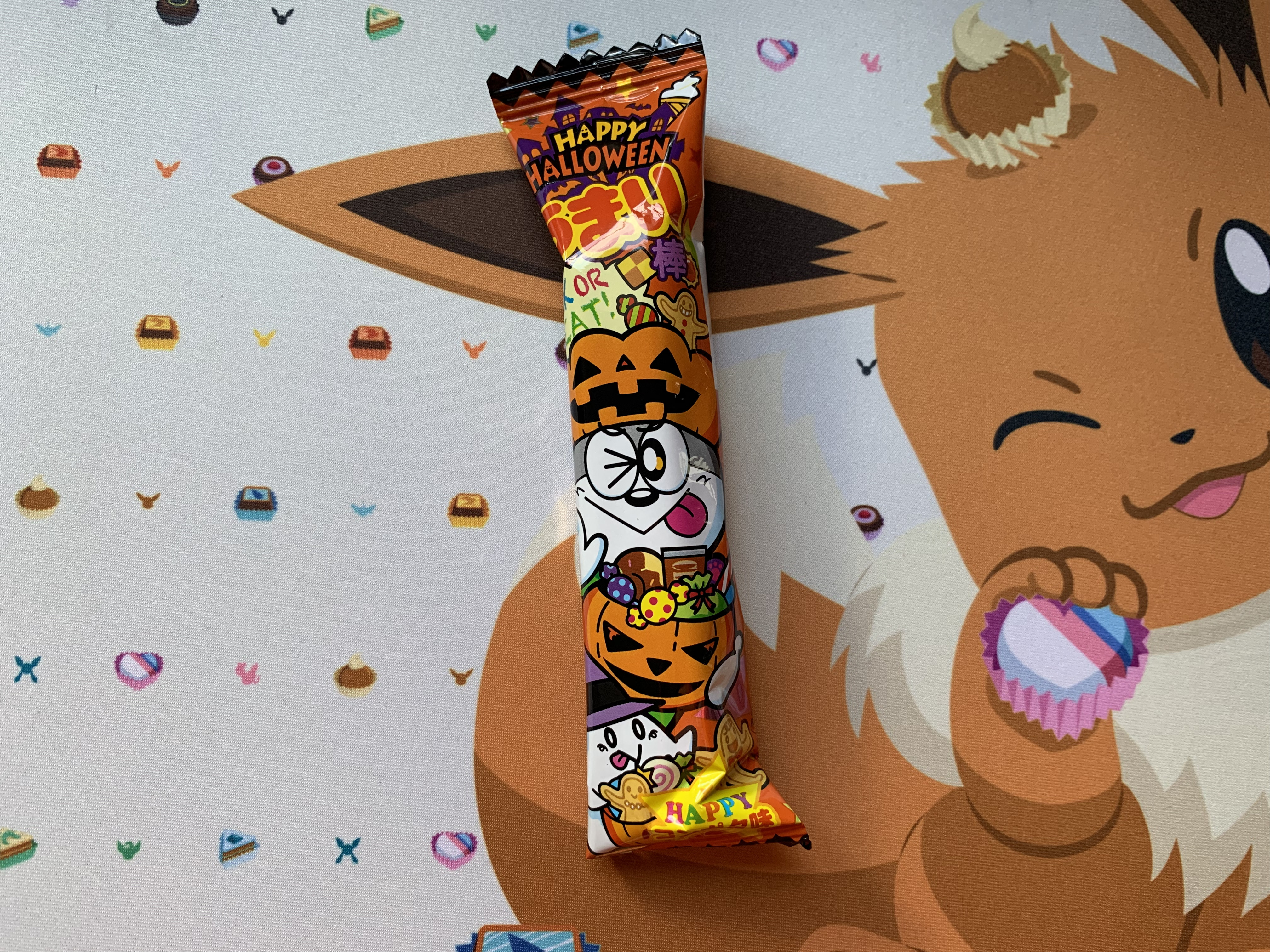 Umaibo Puffed Corn Stick Halloween – I feel every box that Something Japanese send out, they always have the puffed corn sticks in! Sometimes we love them and sometimes we hate them. This Halloween edition is corn potage and pumpkin Umaino. These are available to buy individually on the website but unfortunately are sold out. 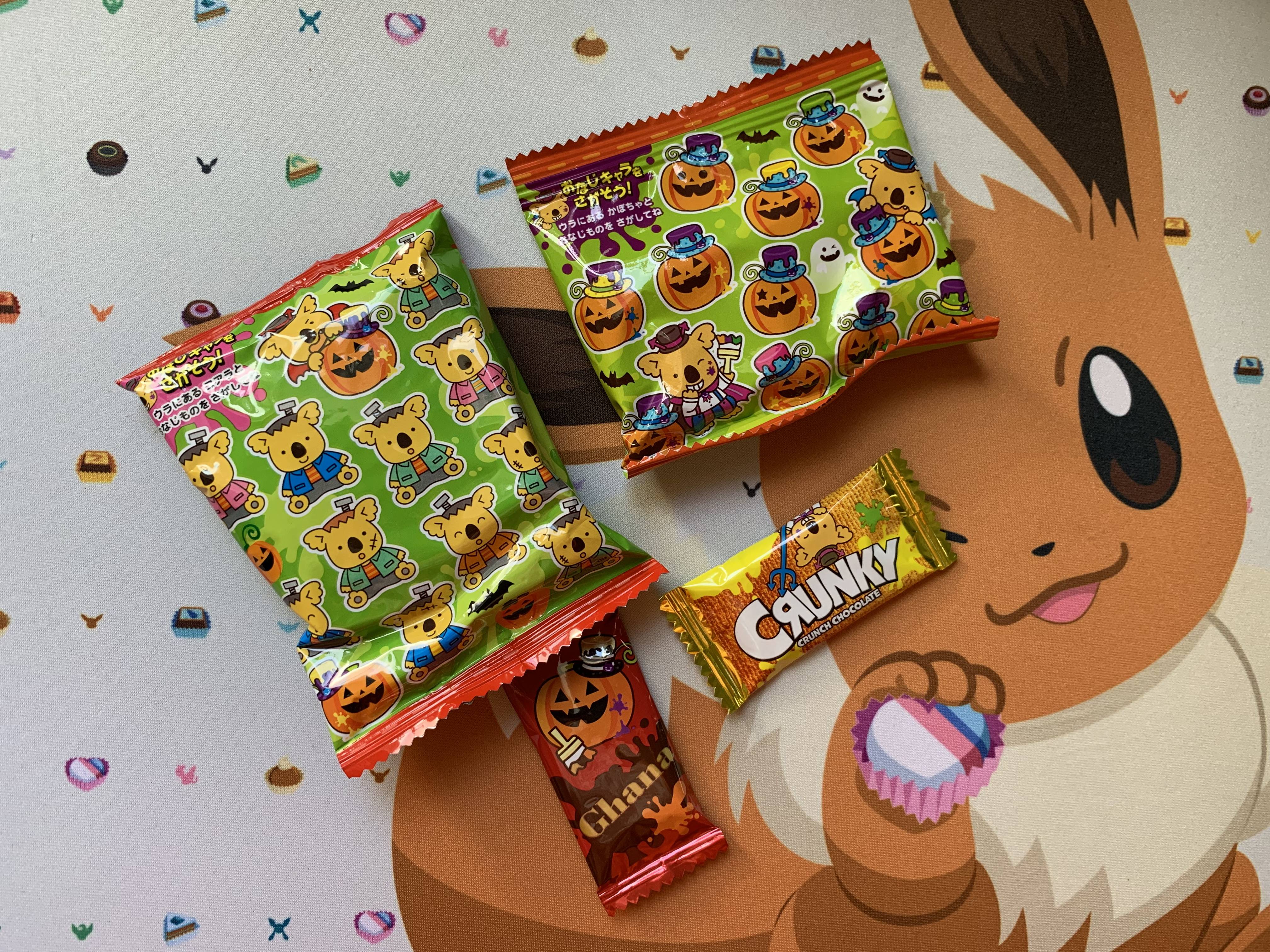 Lotte – We have various snacks here including some chocolates, koala cookies (which you can buy all year around), as well as a chocolate pie, which I’m REALLY excited to have! 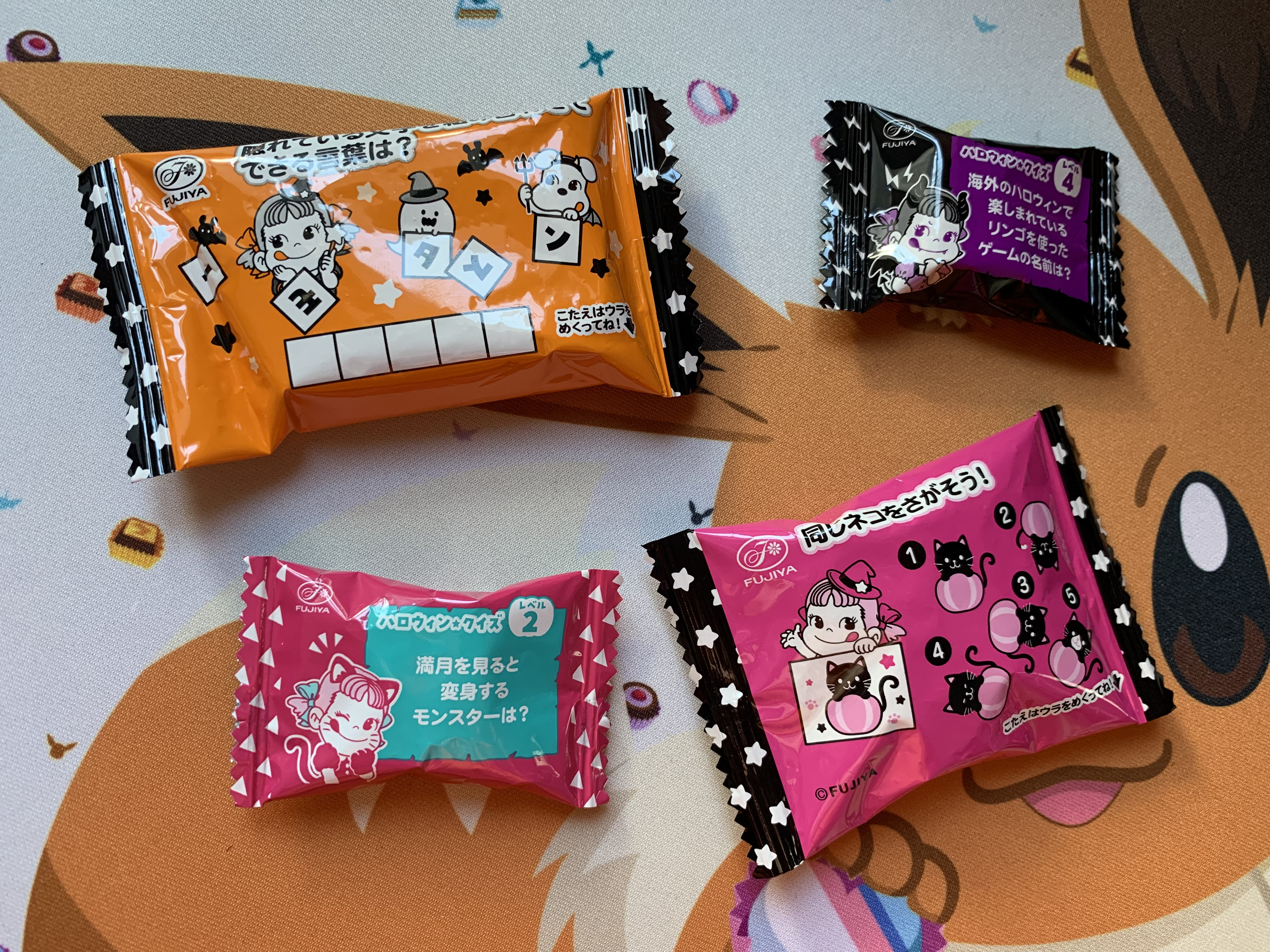 Fujiya – Again, various types of candies here with their character Peko featuring on all the snack packets. It feels like the packets contain chocolates and wafers, which will be really yummy! The bigger packets also have games on them, which are clearly meant for children to do after enjoying the snack. 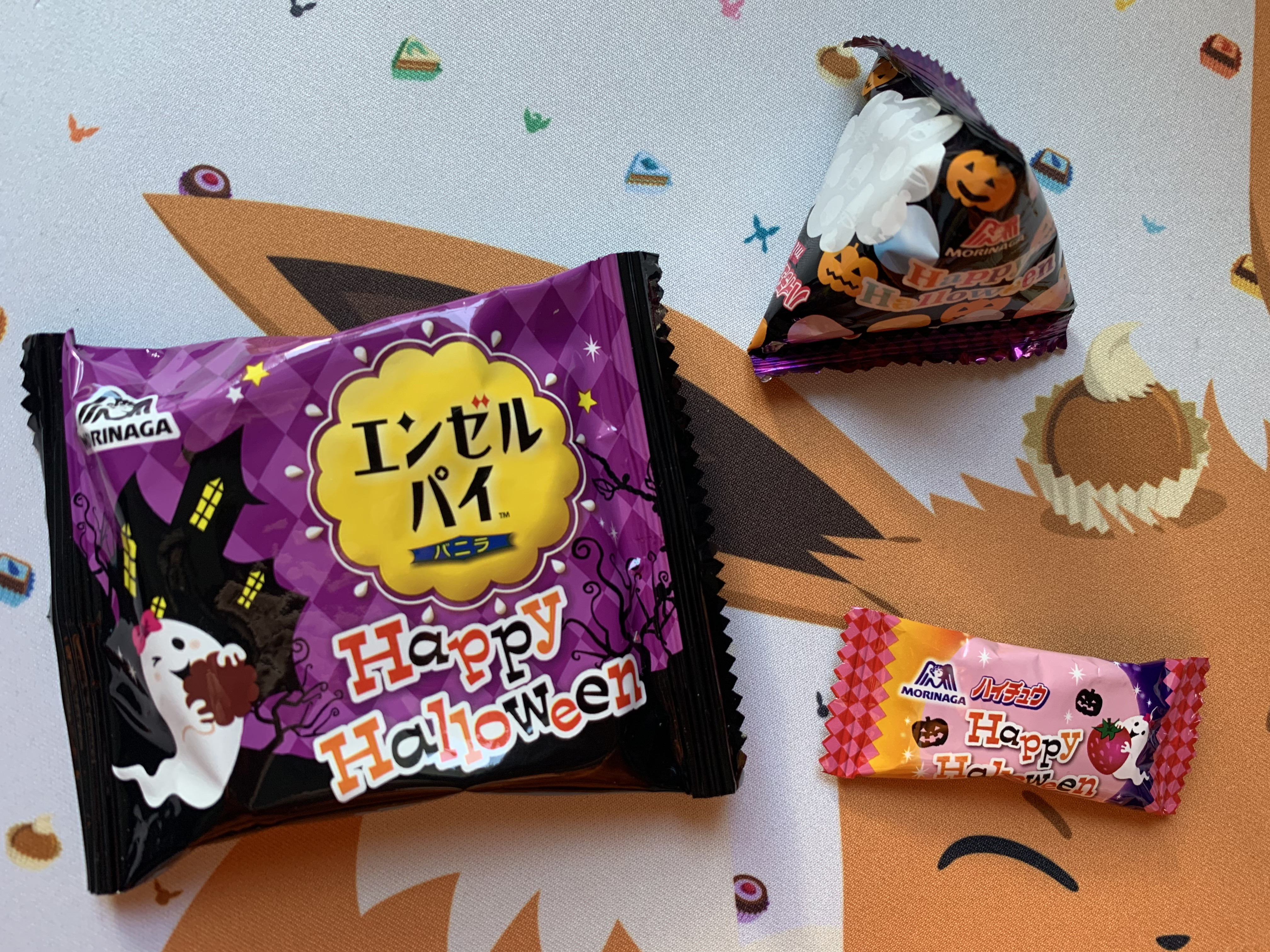 Morinaga – It feels and looks like we have another chocolate pie, AHH! Which means me and Dane can have one each! The other packs appear/do contain chewy sweets, with the one coming from a Hi-Chew candy mix bag that Something Japanese sell on the website. I’m not a massive Hi-Chew fan and much prefer Puccho, so Dane will probably have this sweet. 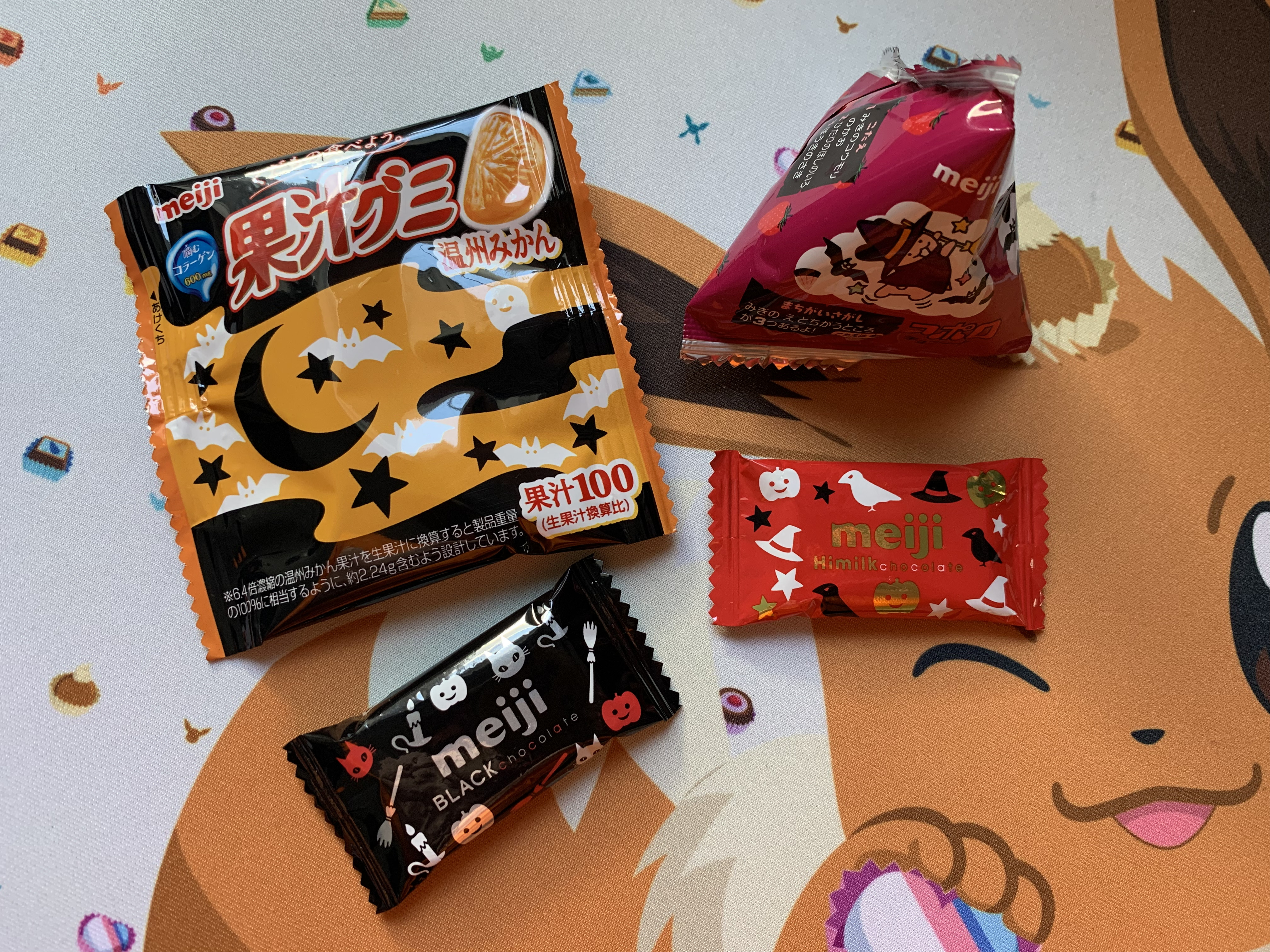 Meiji – My favourite Japanese chocolate! I wish I’d tried this prior to going to Japan, otherwise I would have brought shit loads back with me. You get a couple of little bars of chocolate, ranging from black (dark) and milk chocolate. Alongside that there are some tangerine chewy sweets and by the looks of the packet, some strawberry chocolate. I’m really excited to try all of these! 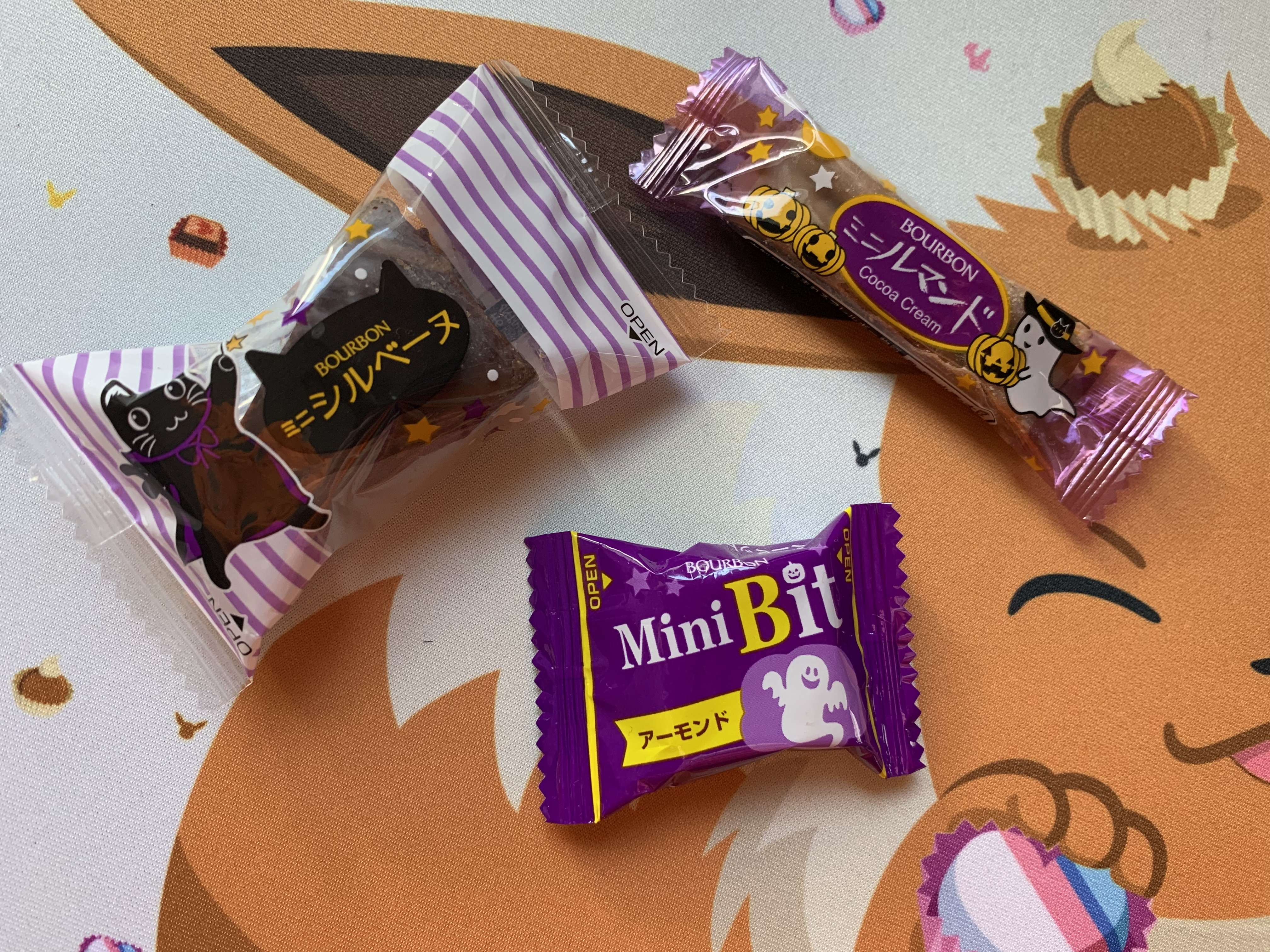 Bourbon – All the Bourbon goods look AMAZING! All chocolate based and yummy, can’t wait to try these, especially the triangle, which looks like it might be cake. 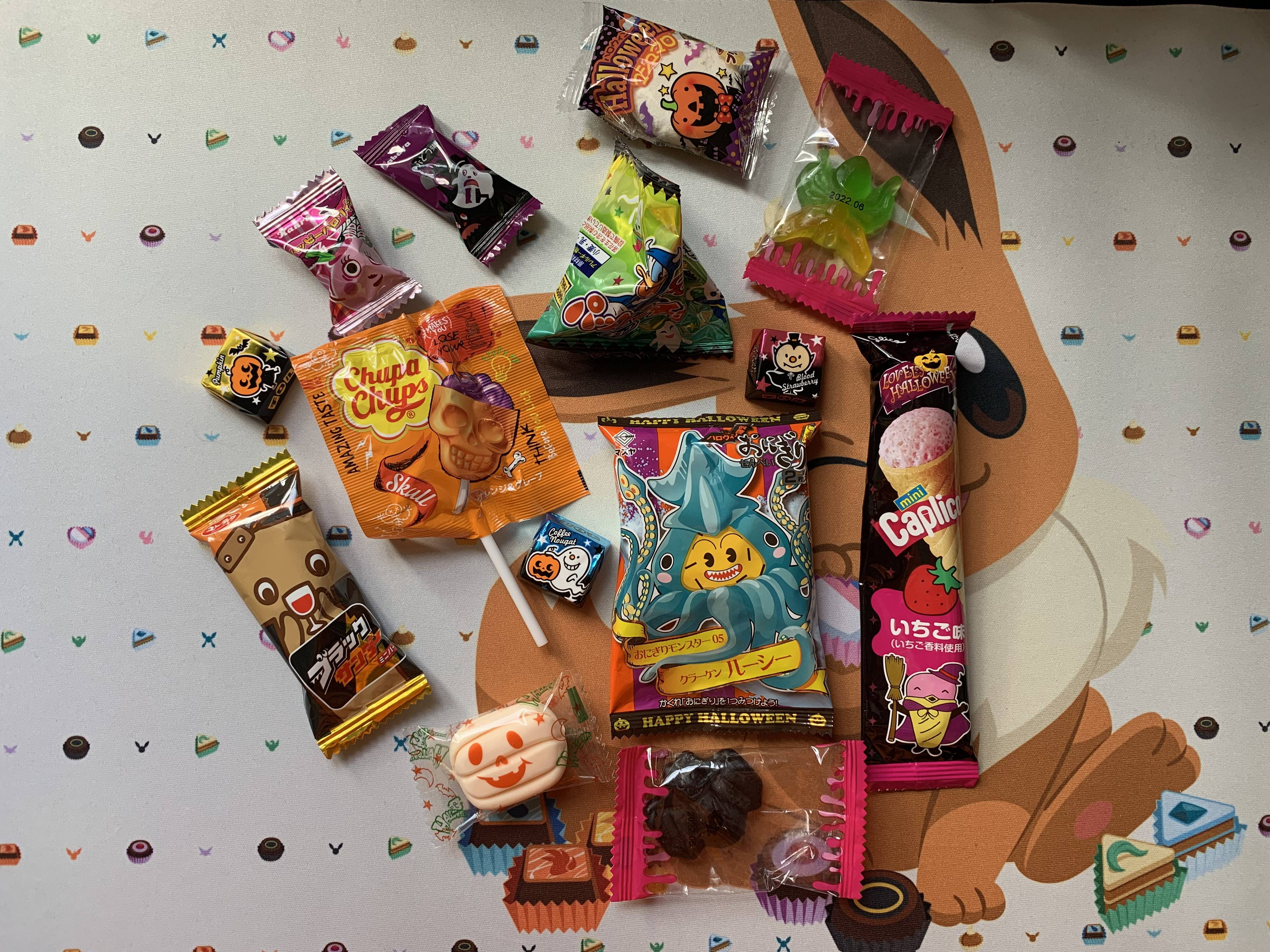 Miscellaneous – Here we have loads of random candy that I lumped into one photo! These range from chewy sweets in the shape of spiders, marshmallows, lollipops, chocolate wafers, chocolate, hard sweets, etc. These will be very much shared and enjoyed whilst watching a scary movie over Halloween.

Overall I am incredibly impressed with the Halloween Candy Box that Something Japanese sent out this year! Whilst I was writing this post Dane kept asking me when we could eat the goodies… Now this post is written and photos taken NOW IS THE TIME!

What do you guys think of the Halloween Candy Box? They’re still in stock, so will you snag one before Halloween next week? Do you already have one? Let me know in the comments.

Sorry to dash, but I’m off to enjoy my Halloween Candy Box!

Until next time though guys take care and have a lovely weekend.