I am SPOILING you guys! Less than a month ago I wrote on my blog about Quirkory and their previous Patreon collection, Baukery. Now, I’m coming to you with their Souls of Nature collection, which released last year through a Kickstarter campaign. 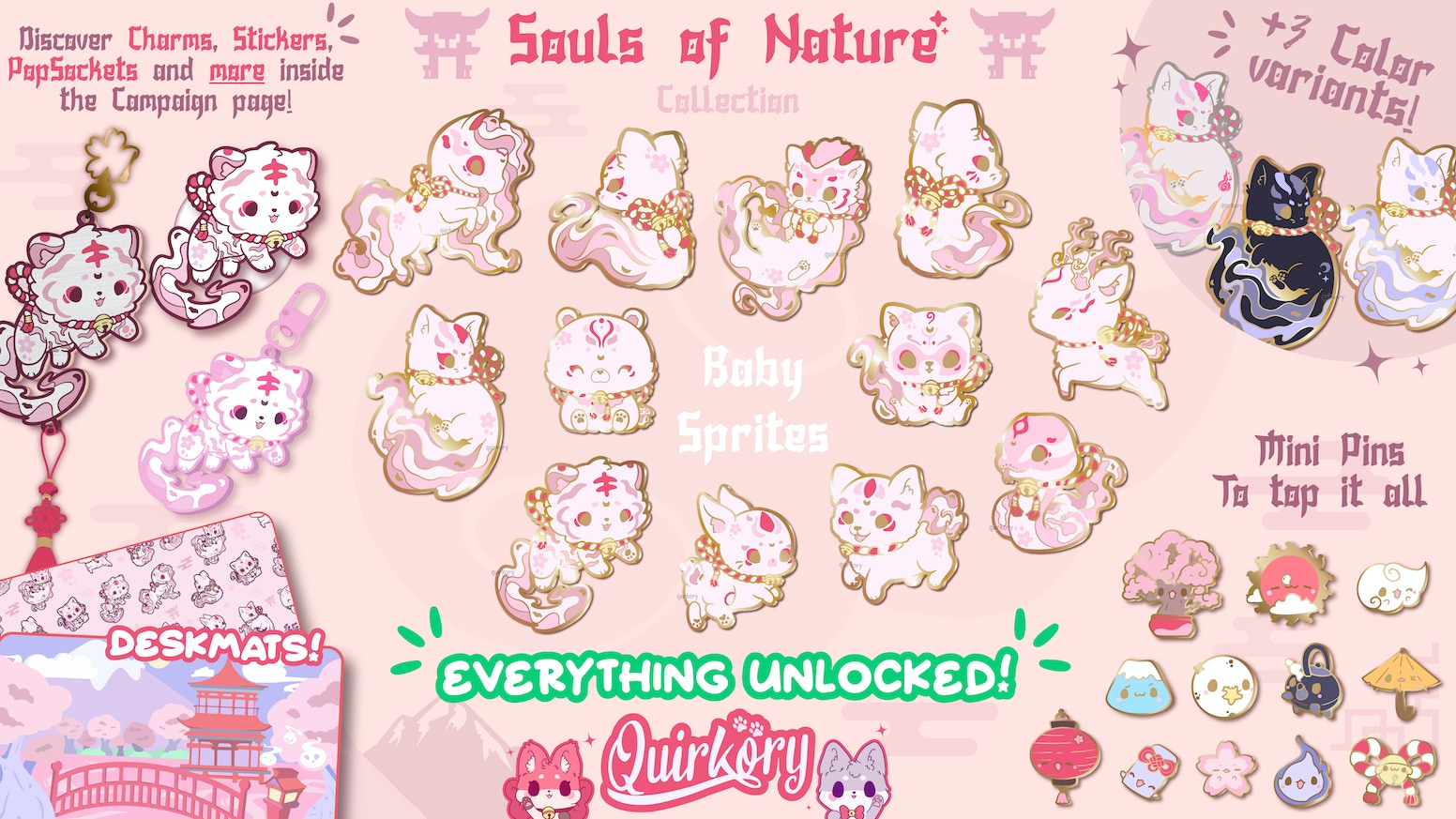 I’ve been so excited to share the goodies I backed through this campaign, but they have taken a while to arrive with me due to some issues Quirkory faced. I don’t know if this upset anyone at the time, but personally I wasn’t fussed, I knew I would get my goods from Quirkory eventually and in all honesty, they were worth the wait!

Quirkory’s Souls of Nature collection had been in the works for quite some time, with original sketches being drawn up in late 2019! The collection itself is huge, alone with a whopping forty four different enamel pin design combinations! 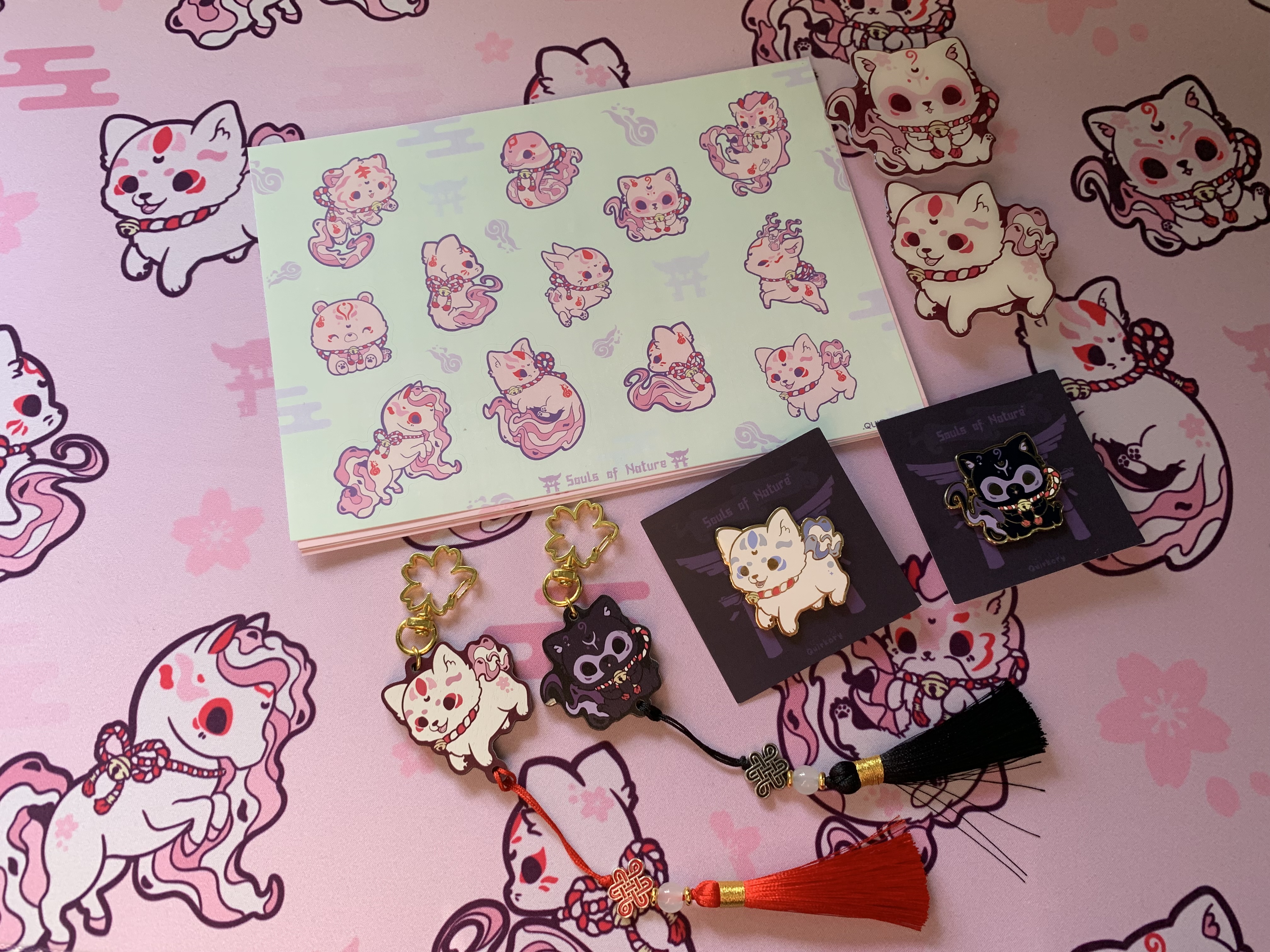 I opted for two enamel pins, as well as a deskmat. Alongside the goodies I backed for, Quirkory also sent me some pop sockets, as well as wooden charms!

So first of all I will talk about the goods I backed. 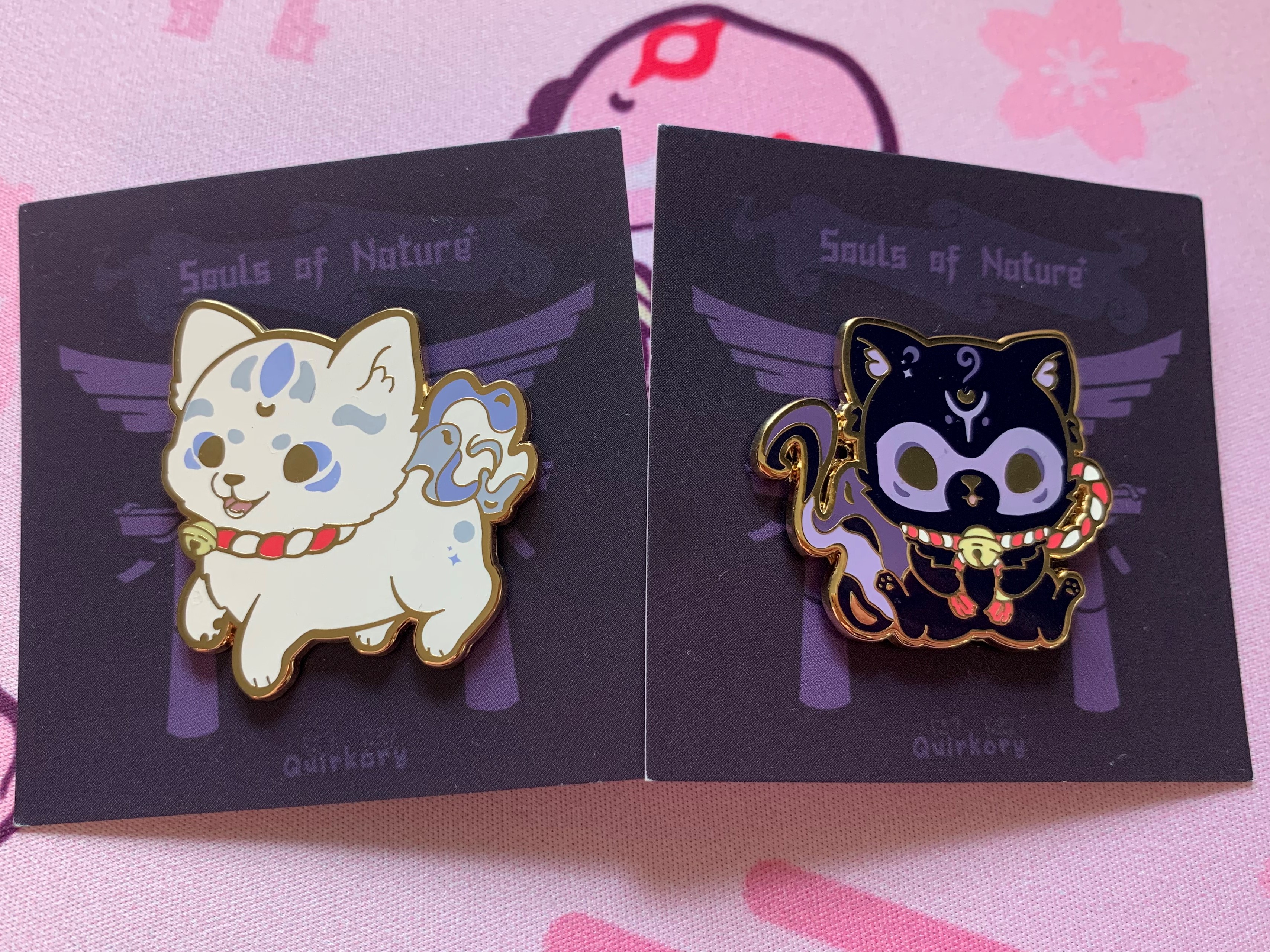 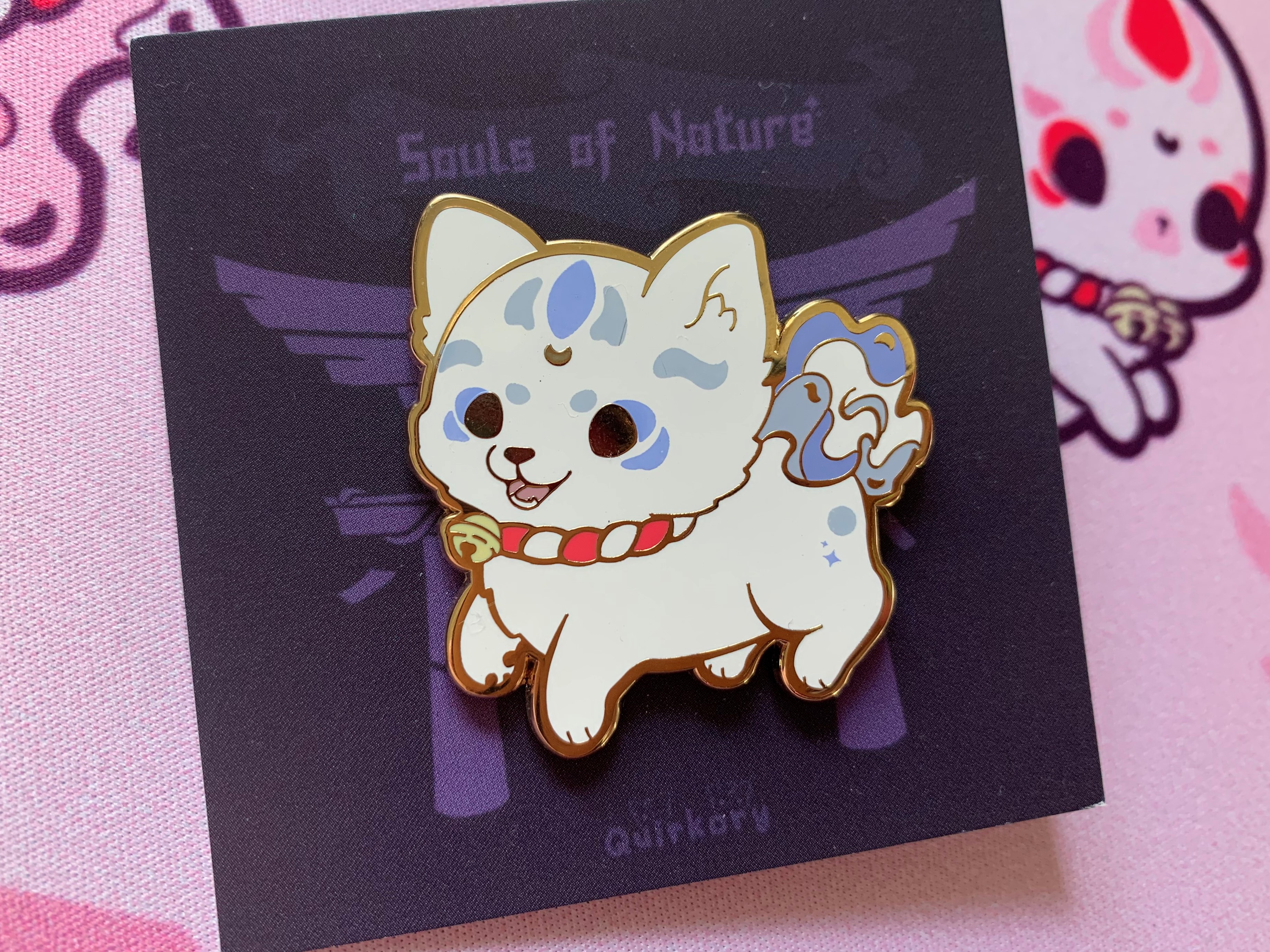 I have to say, this is my favourite design out of he twelve, mainly due to how playful and cute the design is, but I love dogs, alongside foxes, sea otters and raccoons, they’re my favourite animal. The inu design is adorable in itself, with the inu’s design in a running pose. I opted for the light variant for the inu design too as I felt it worked really well with the white body, blue accents and the red bell collar. I wish I’d backed for some of the other colour variants of this enamel pin so I could pop one on a backpack, or jacket. 😛 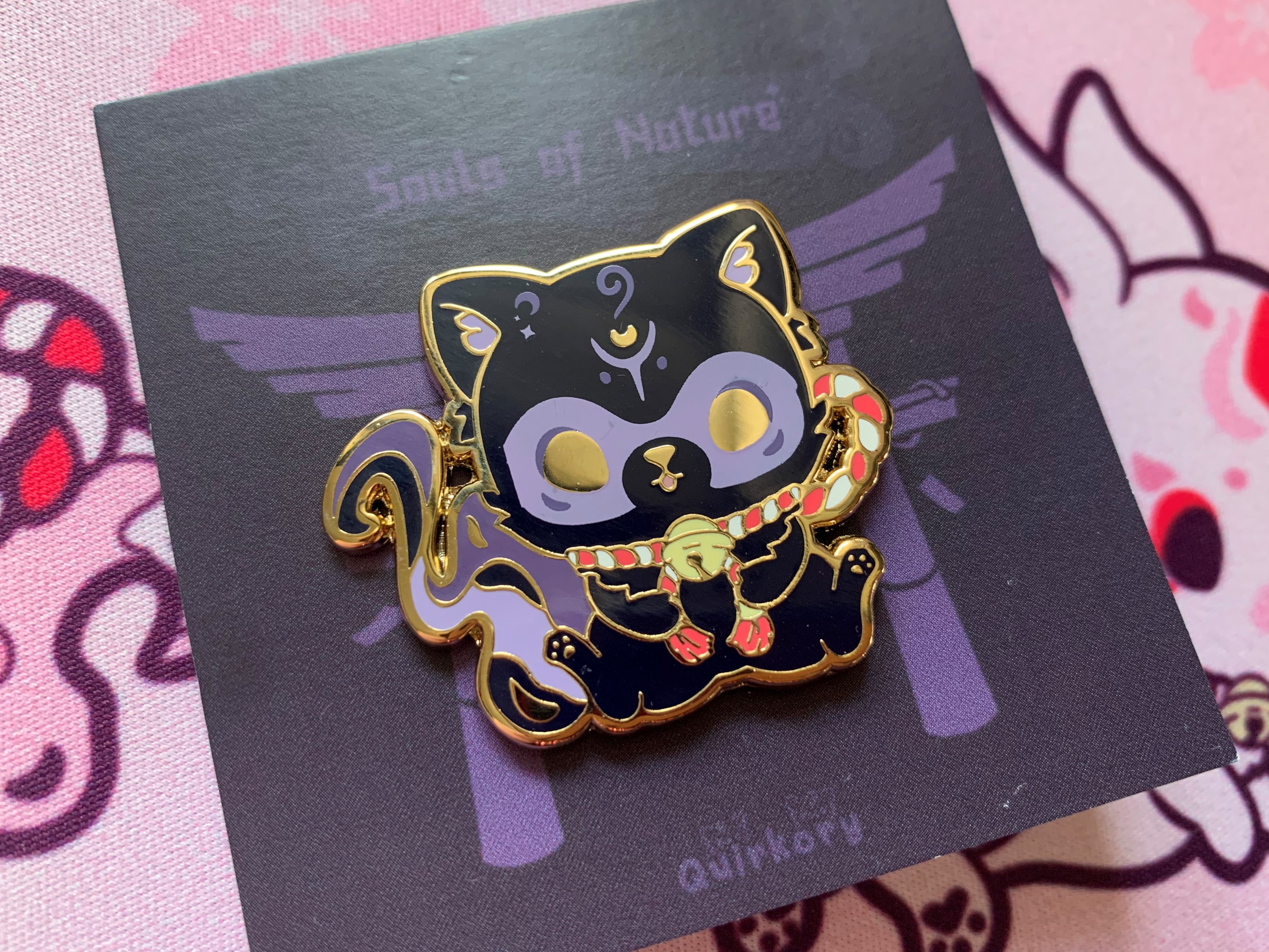 Definitely my second favourite design from the collection, and one I knew from the start I wanted to get in the dark variant! As tanuki are grey/dark grey, it made sense to go for a darker colour. I did like the look of the one variant which would have given the tanuki black and pink accents, but as purple is my favourite colour, the dark variant was a no brainer! 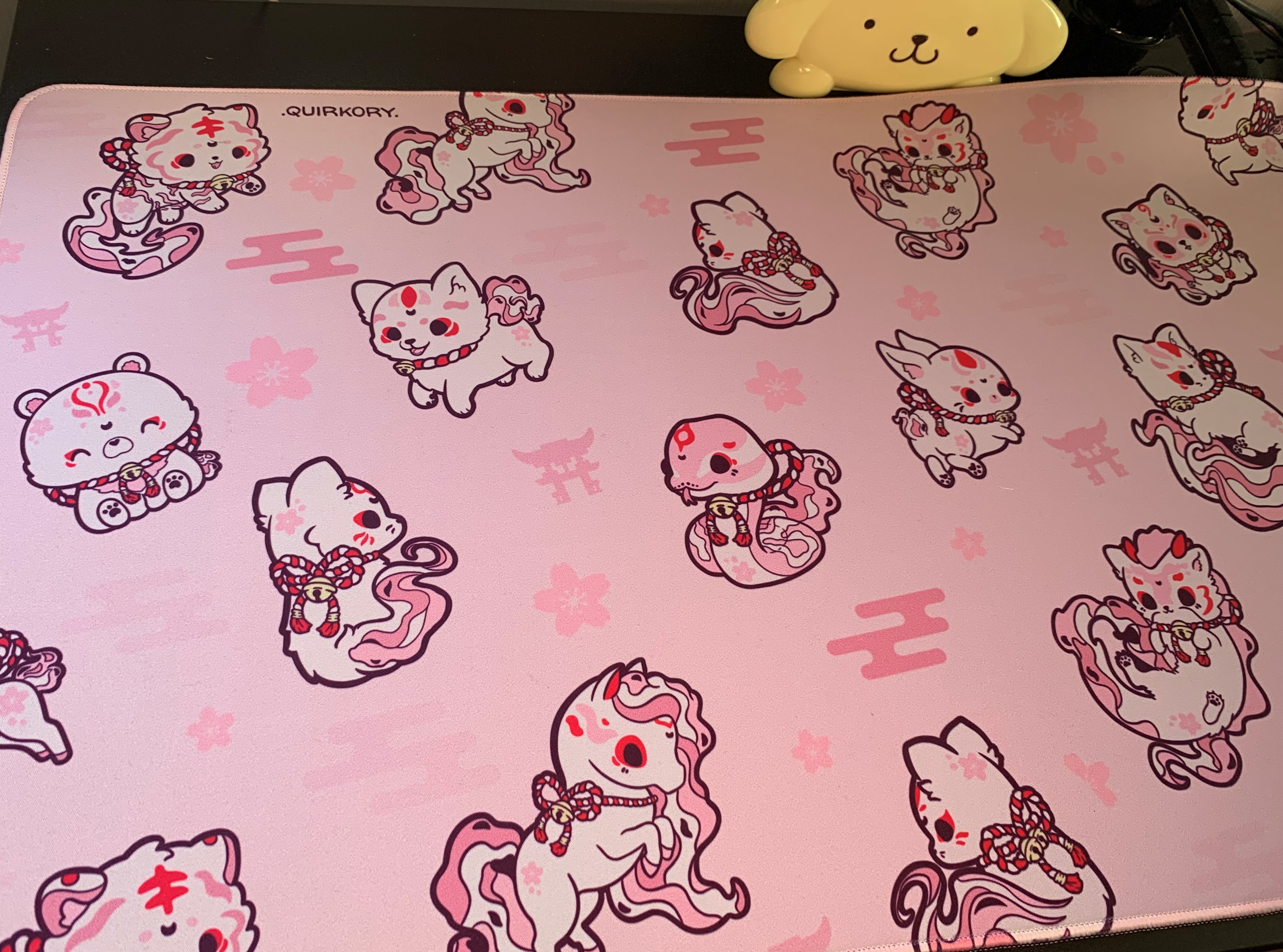 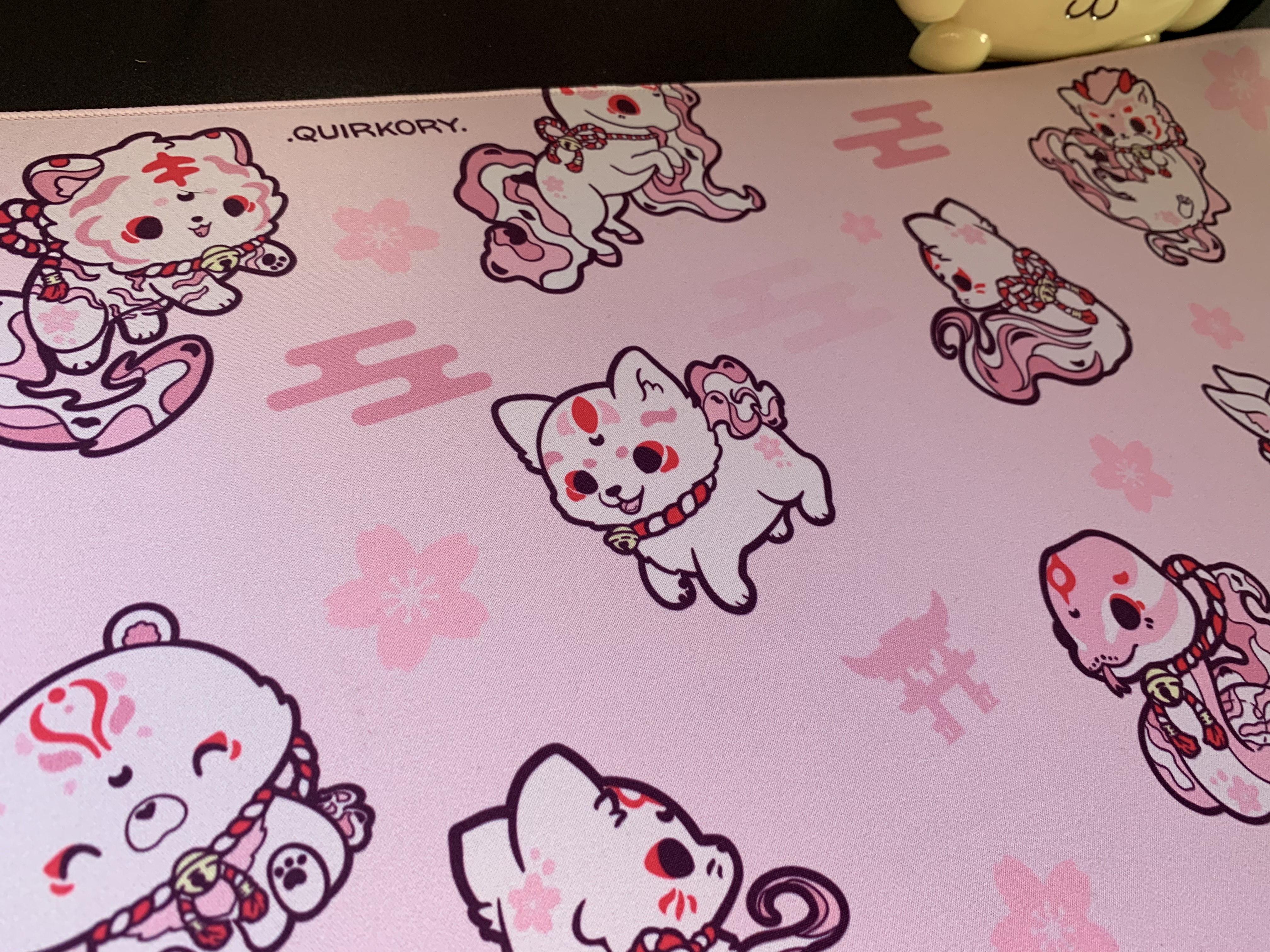 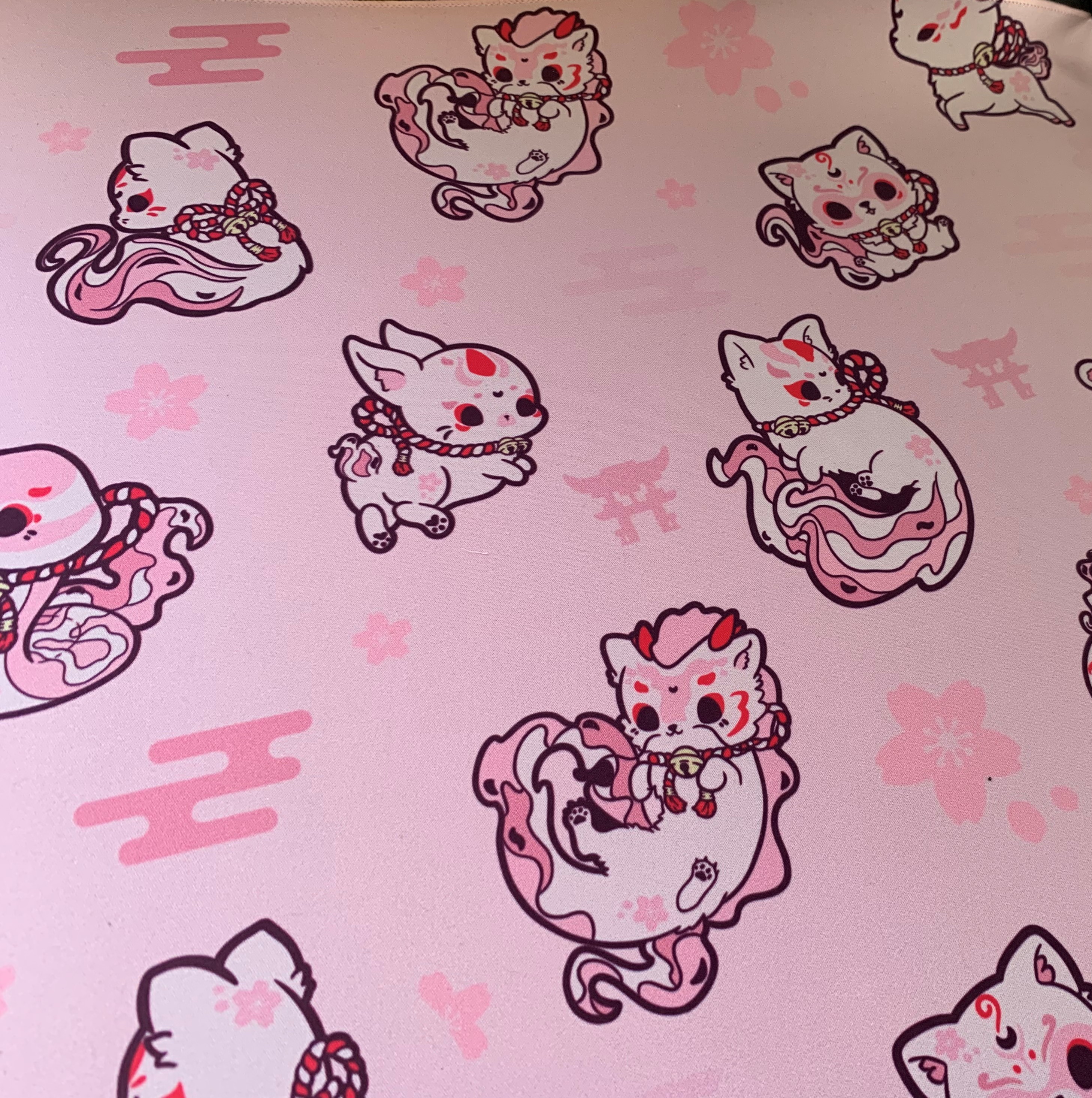 This was probably the item I was most excited for! At the time of backing this deskmat I hadn’t long bought my Eeveelutions deskmat from Japan, so in my excitement I did also back for the Hanami pattern deskmat too. This thing is HUGE, it’s too big for my desk, as you’ll be able to tell on the photos above. It features all of the animal designs, which I think is adorable! It really is bringing a smile to my face whenever I’m working from home, or sitting at my desk. It’s going to be my new flat lay image too, which makes a nice change from the Eeveelution one.

I’ll also share with you guys the items that Quirkory sent me as little freebies! I was not expecting any extra goodies thrown in, so as always, a massive thank you for Quirkory for these! 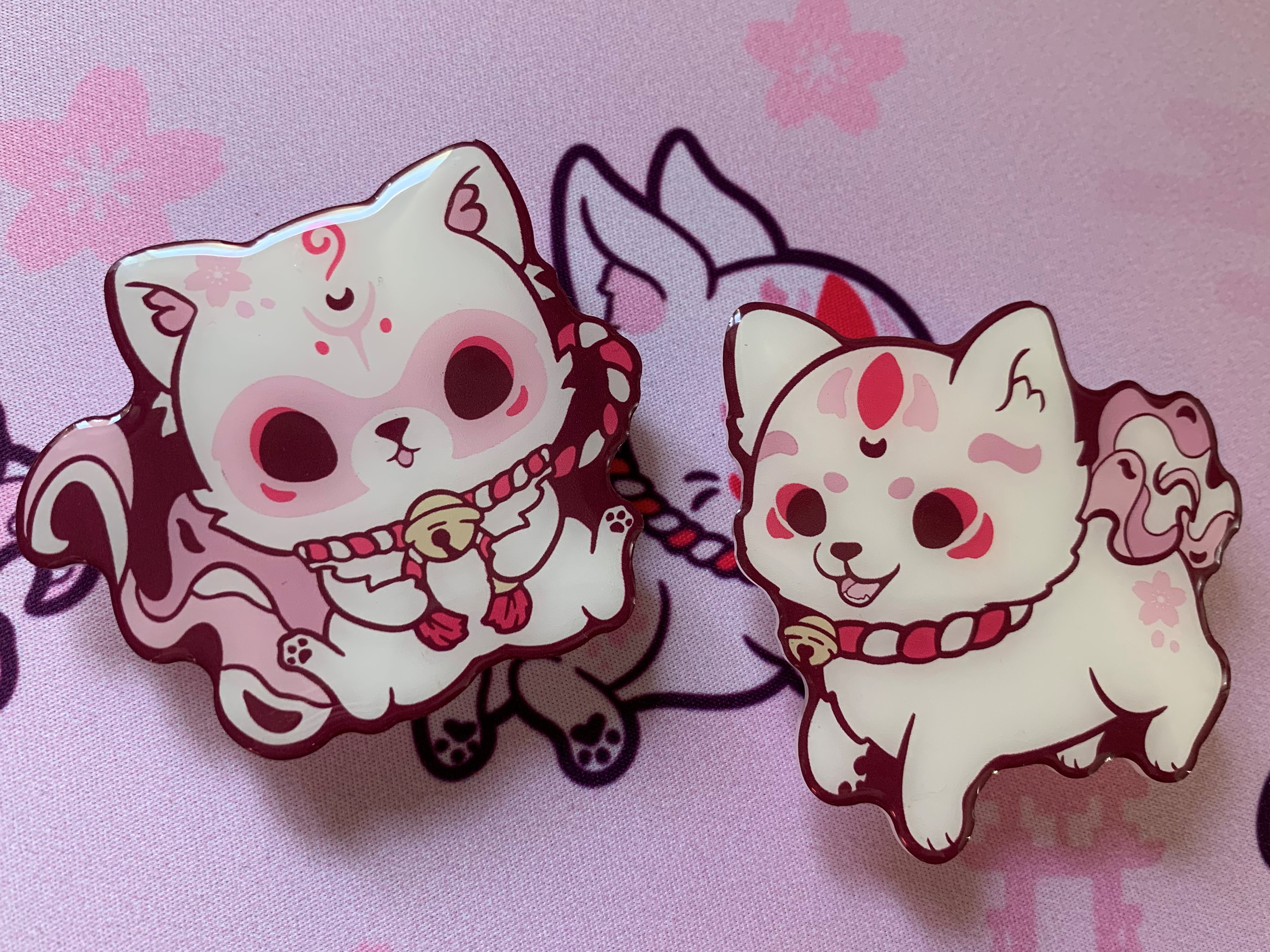 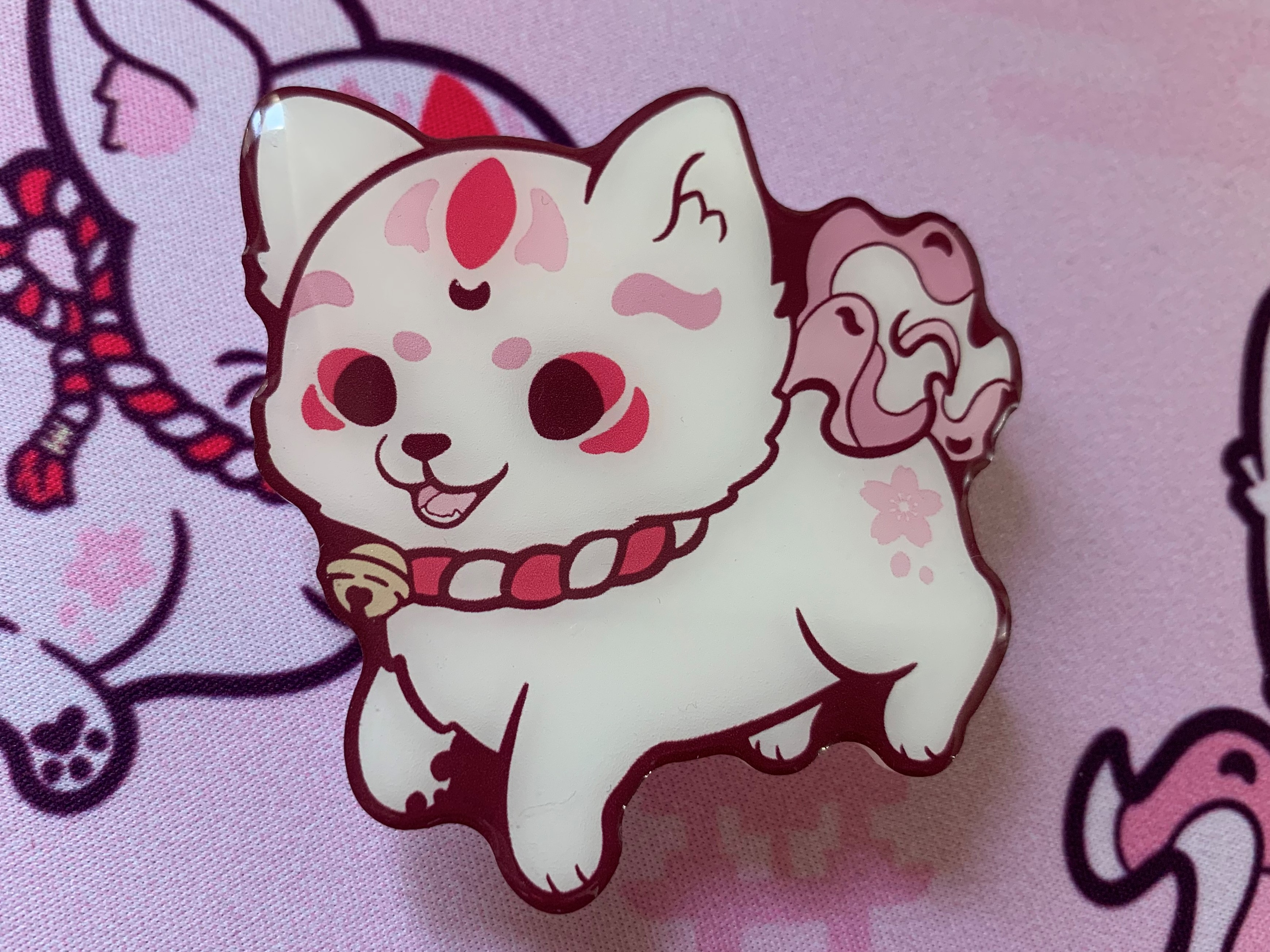 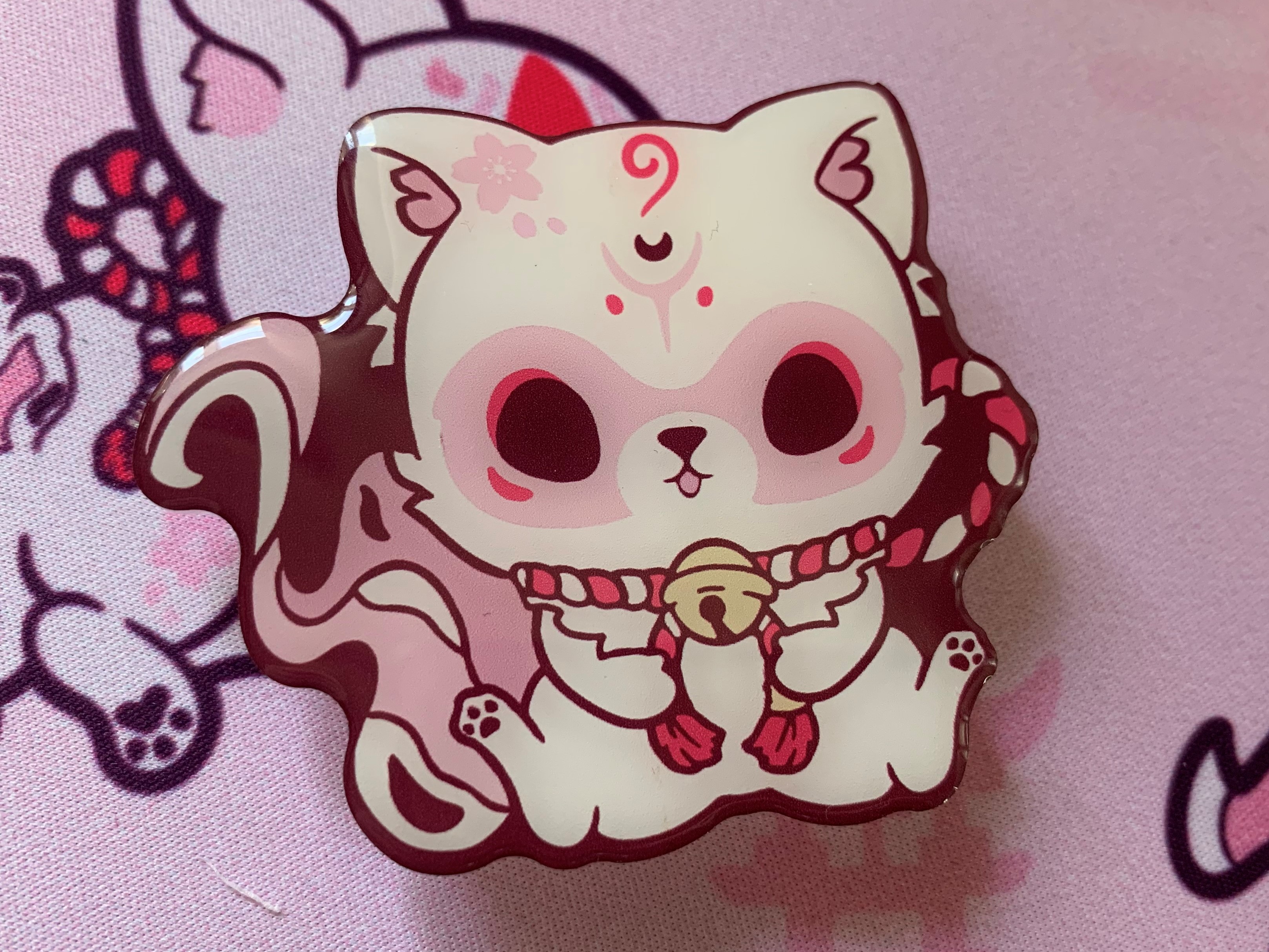 Who doesn’t love a good pop socket, eh? I lived for mine during 2018 and then 2020. These days I don’t use one, but as and when I change my phone, I would like to get a case where I could use one! The two designs Quirkory sent me are adorable, especially the inu, which I can’t stop staring at whilst writing this post! They seem really sturdy and good quality! If I don’t manage to use them as pop sockets for my phone, I may end up using them as little hooks for my plushie cabinet… We’ll see. 😛 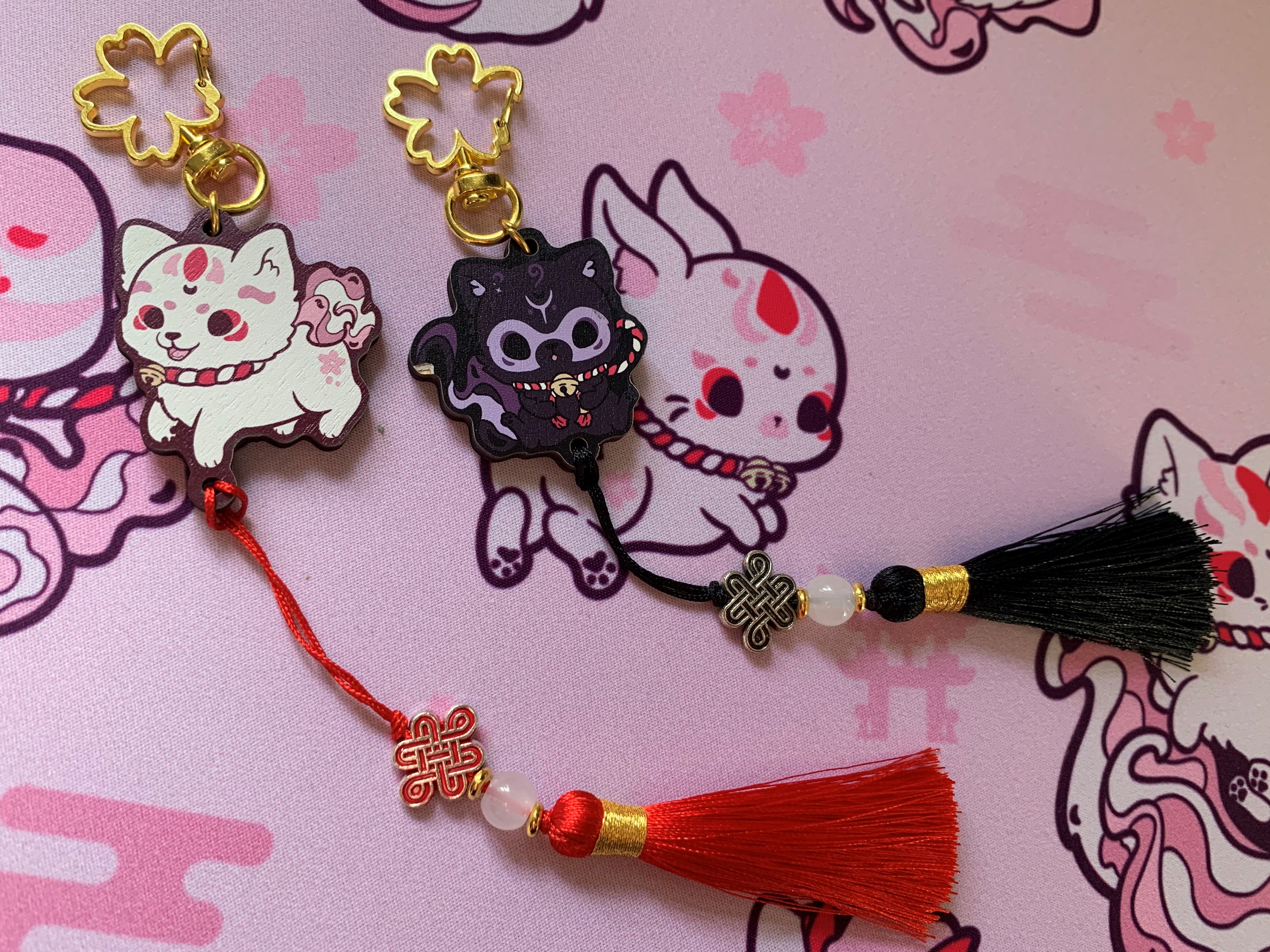 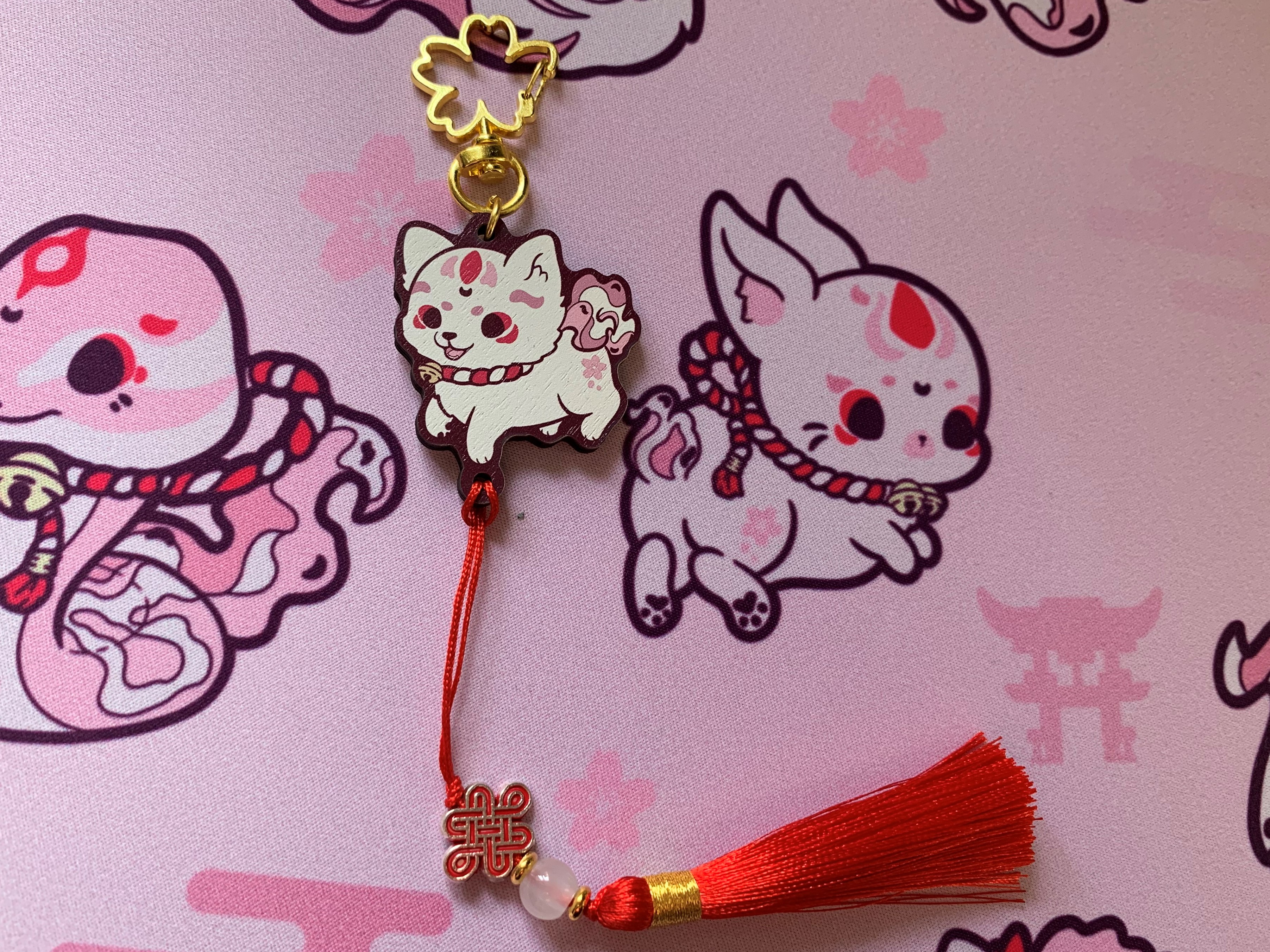 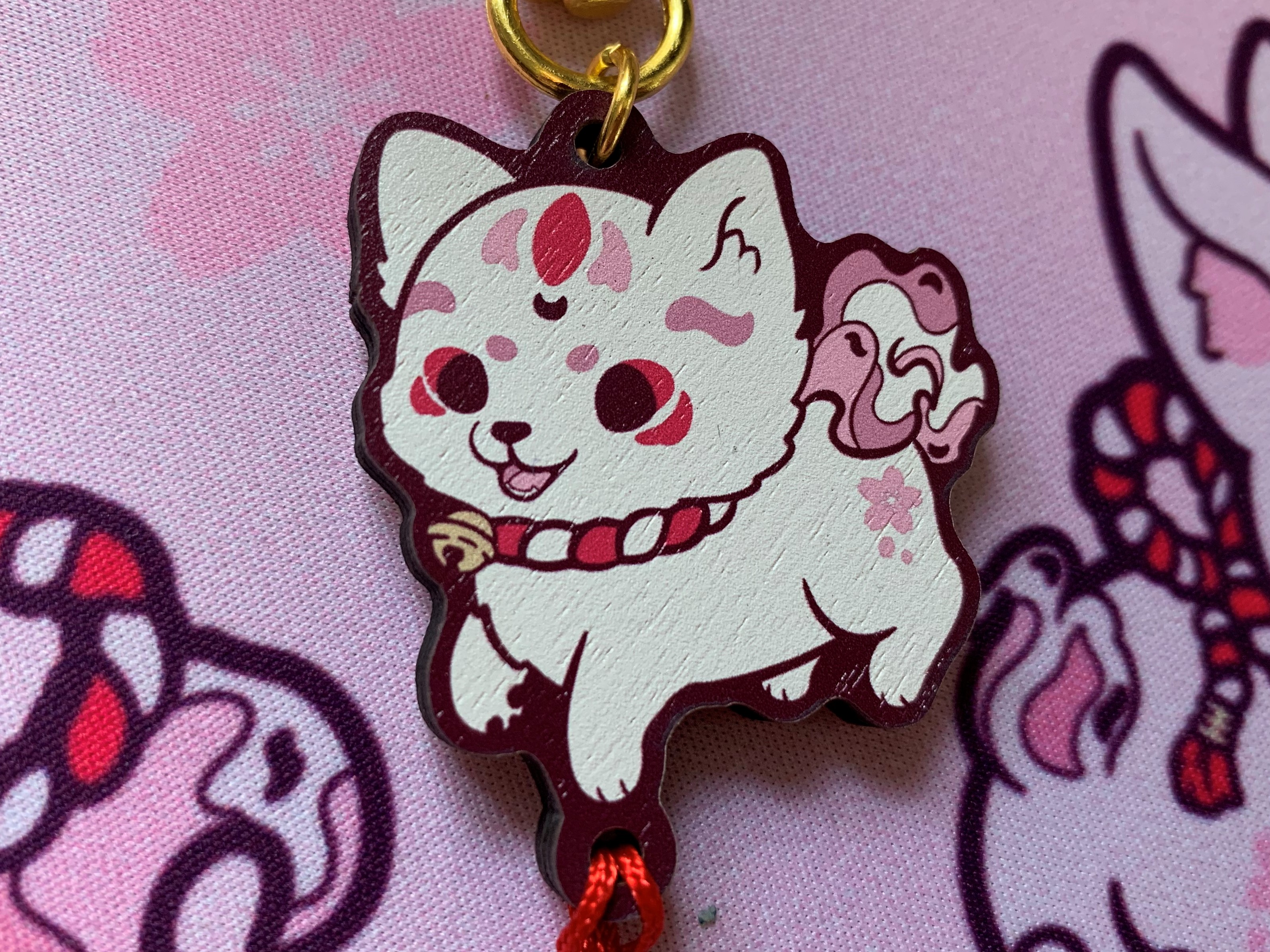 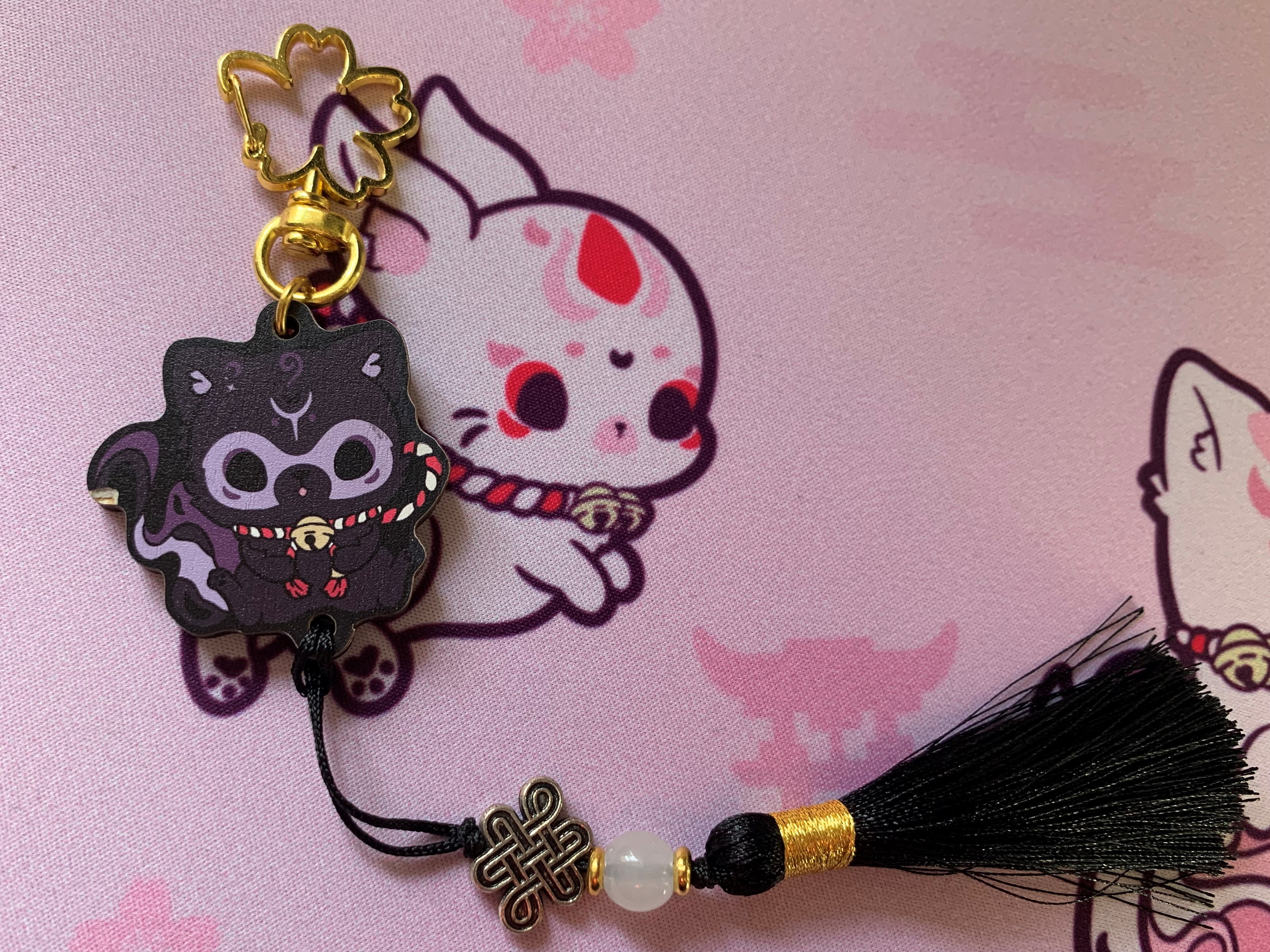 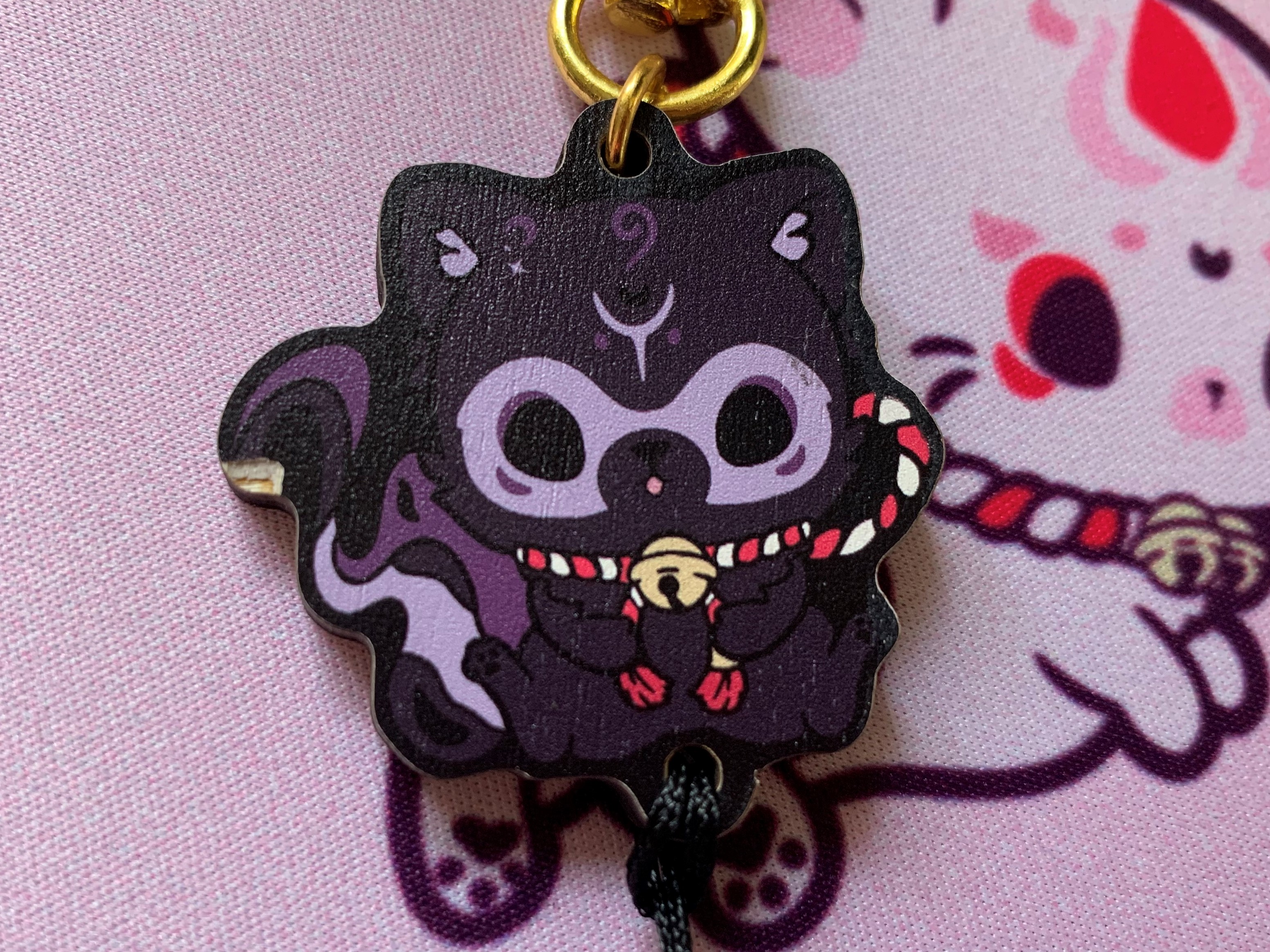 These were a massive surprise to see and to be honest, I’m so grateful for Quirkory sending me these, as I do love charms, especially cute ones! Again, they sent me the inu and tanuki versions, with the inu being a light variant, and the tanuki being a dark variant. The tanuki I received a while before my Souls of Nature goodies arrived, so that’s been hanging with a tanuki windchime I bought in Japan in 2020. I do plan on potentially popping the inu charm on my car or house keys… because why not! I’d possibly take the tassel off however as I’d worry about it getting ruined. 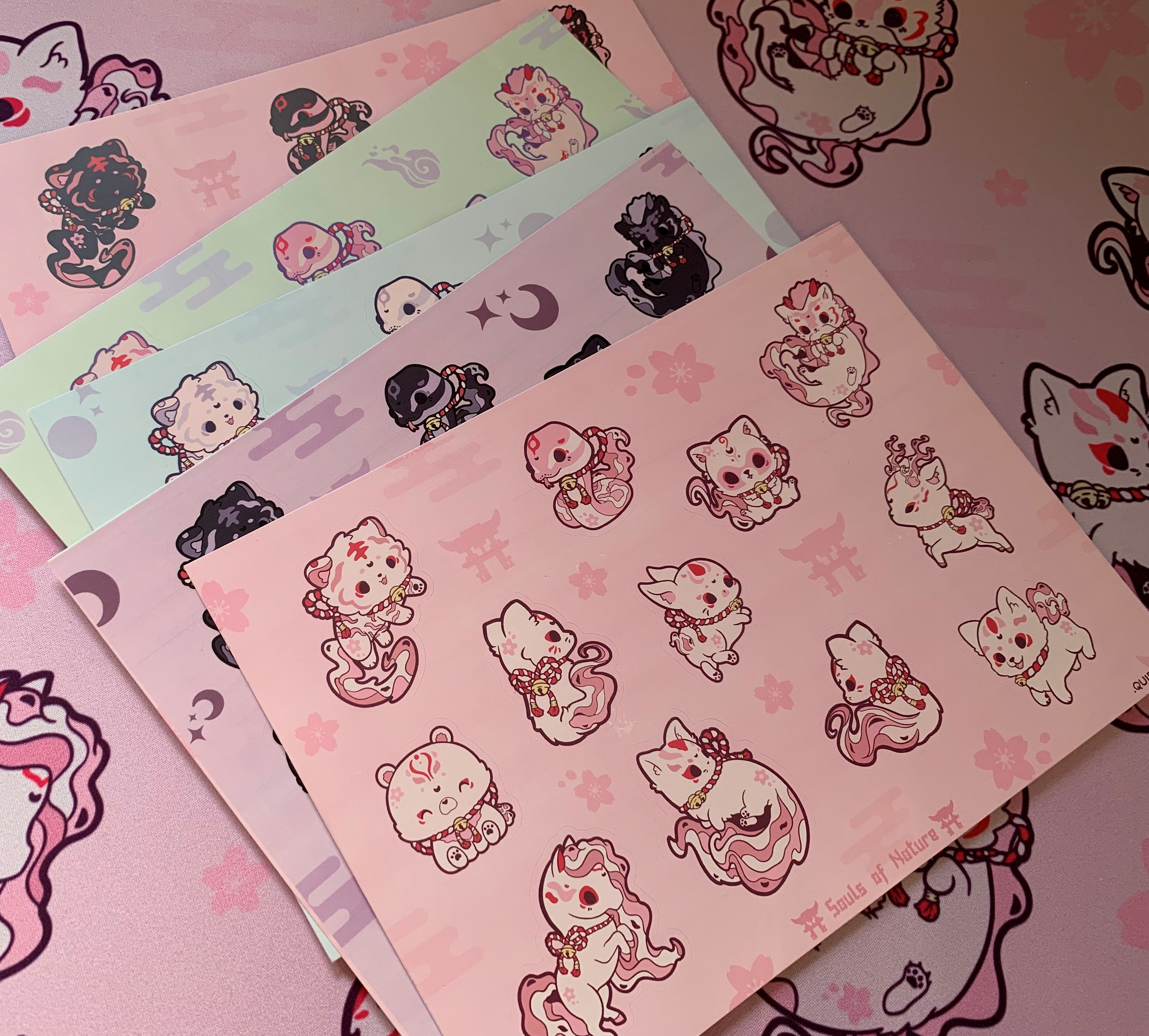 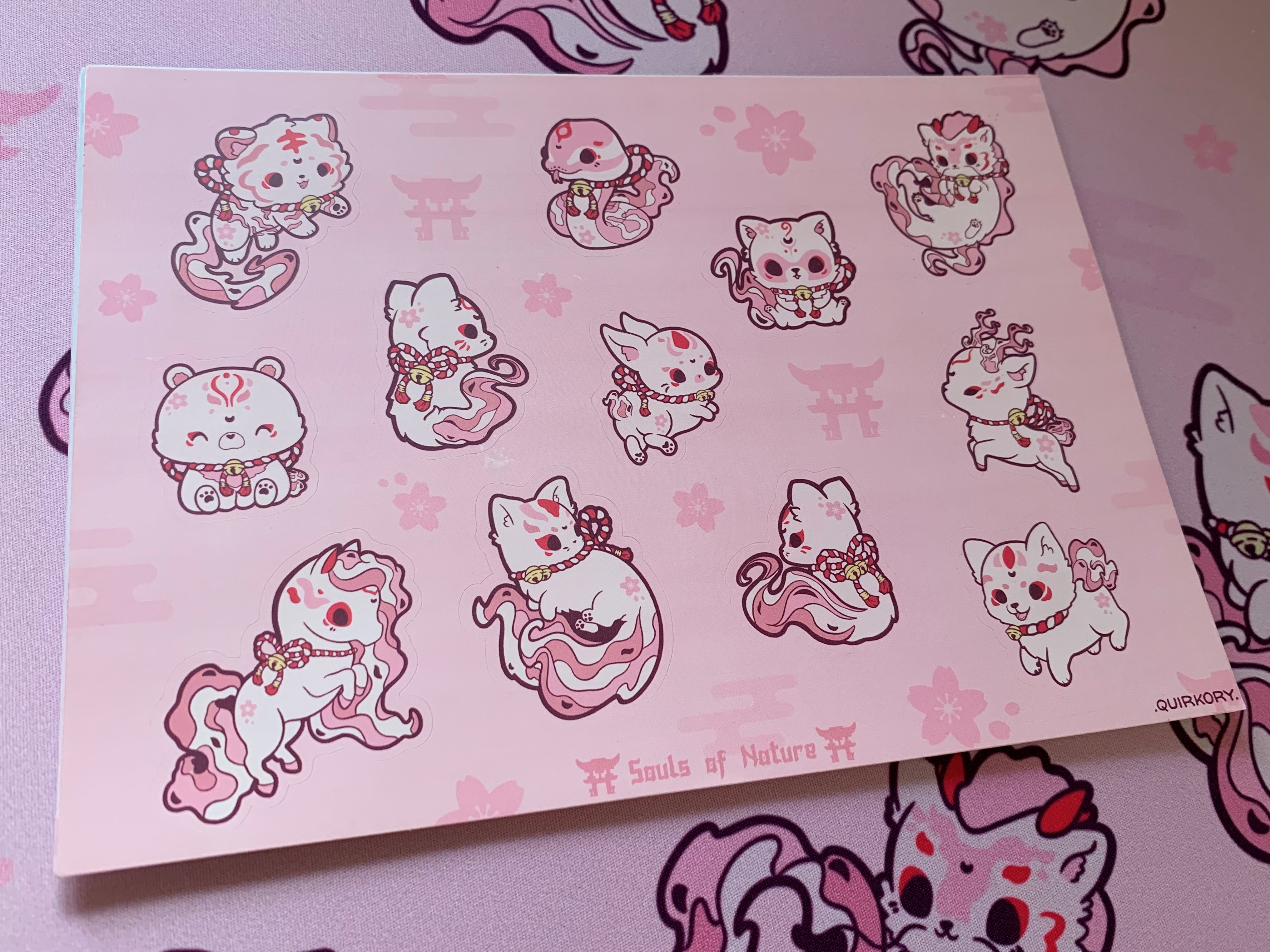 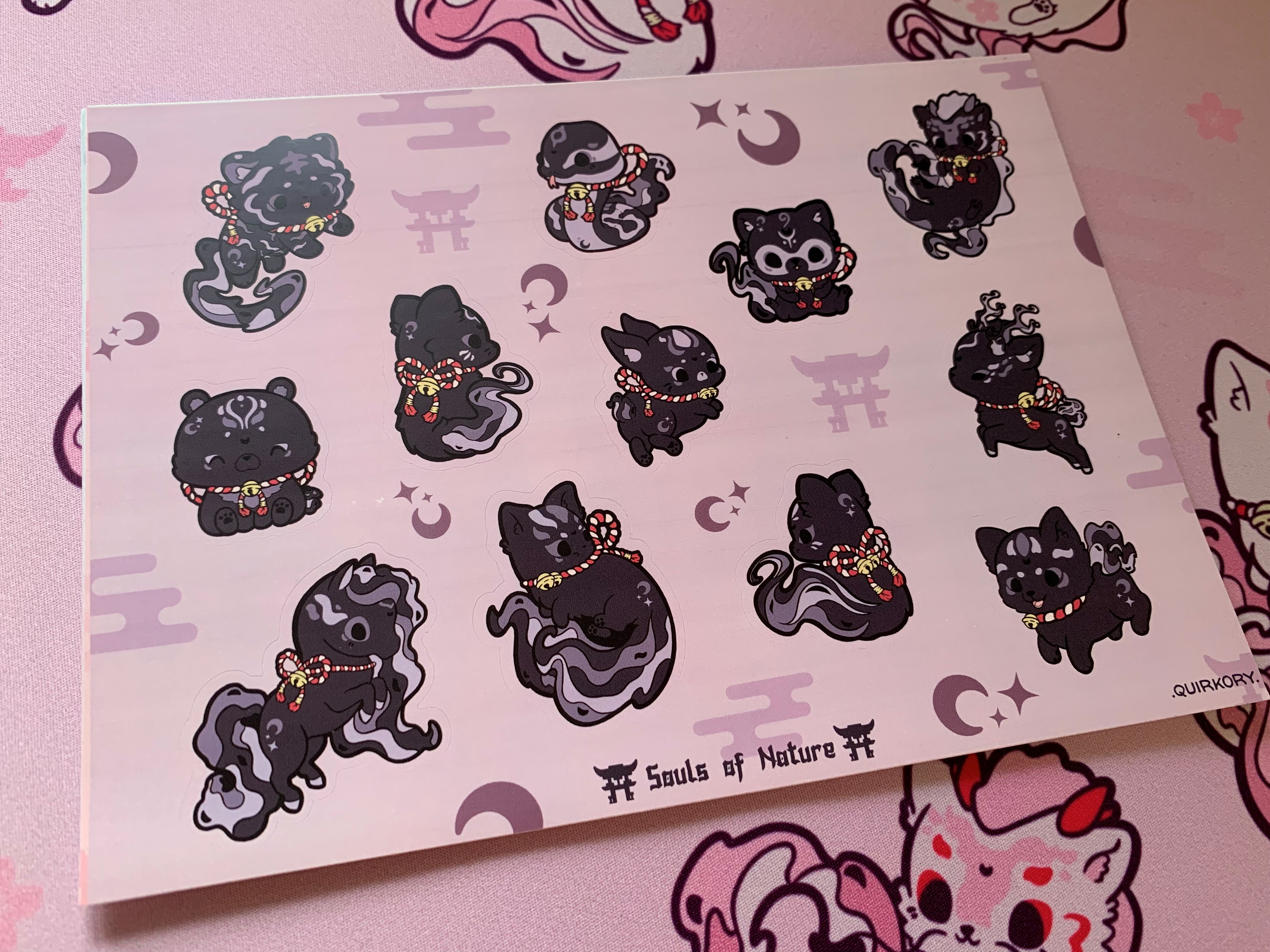 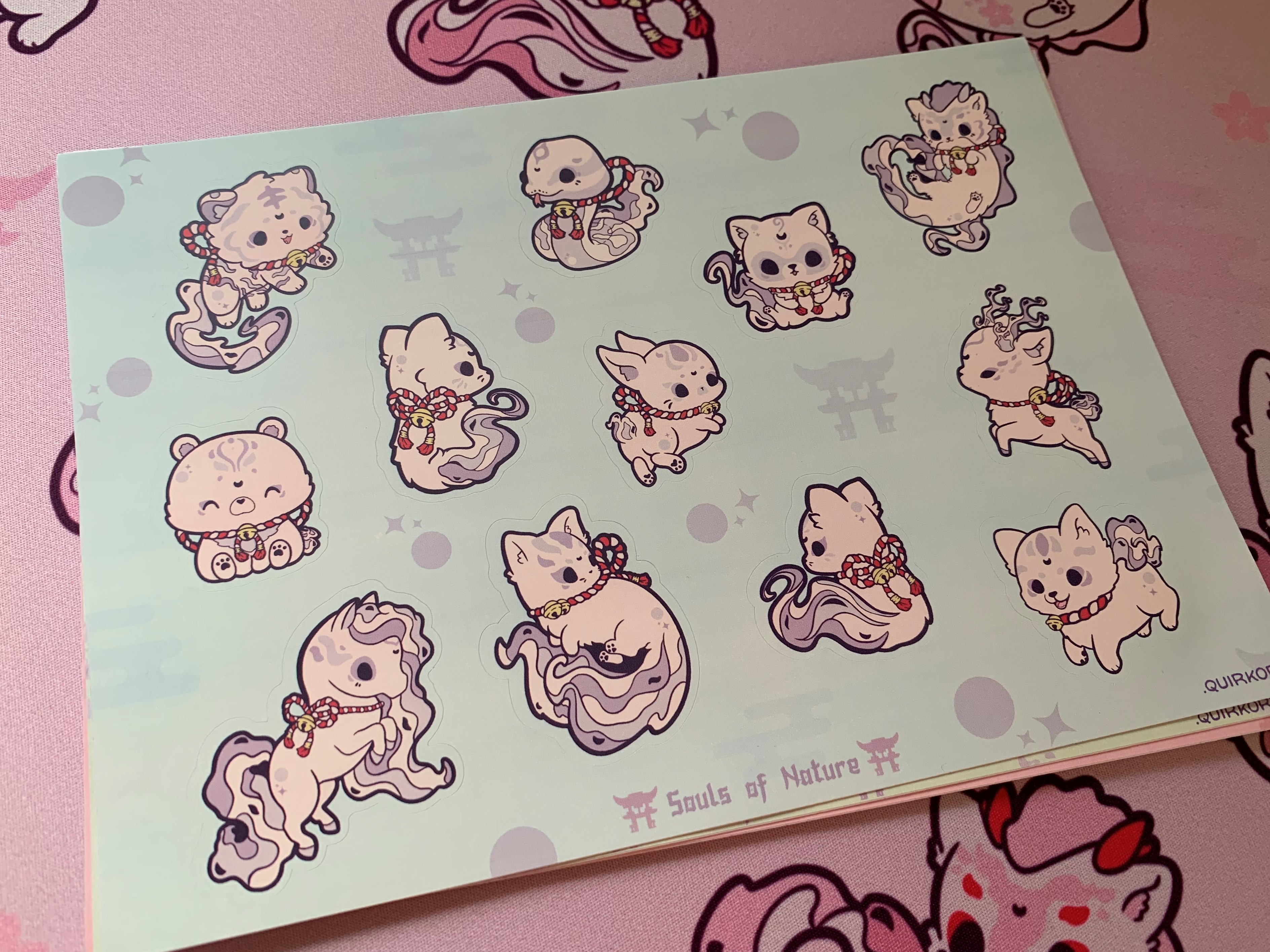 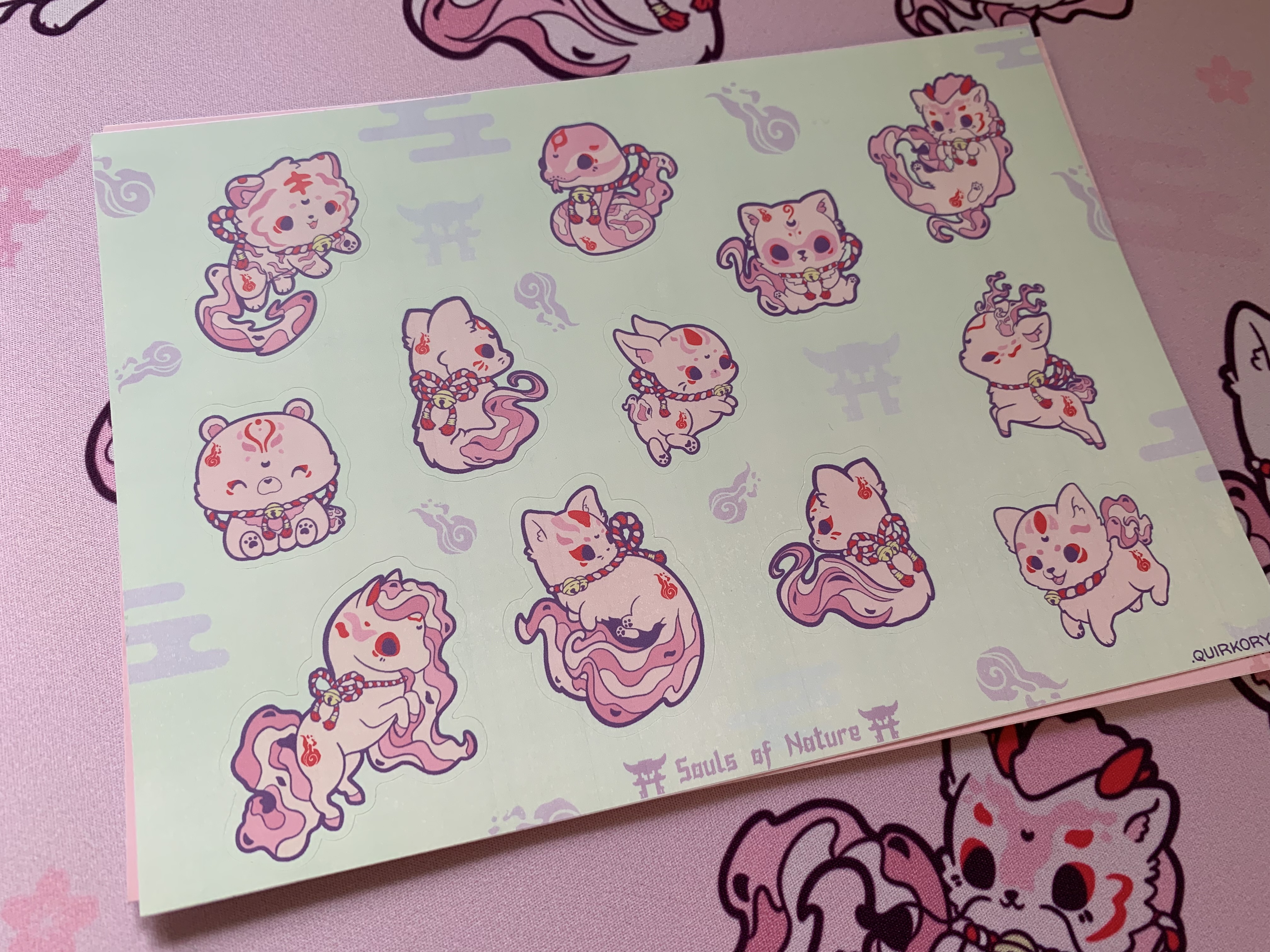 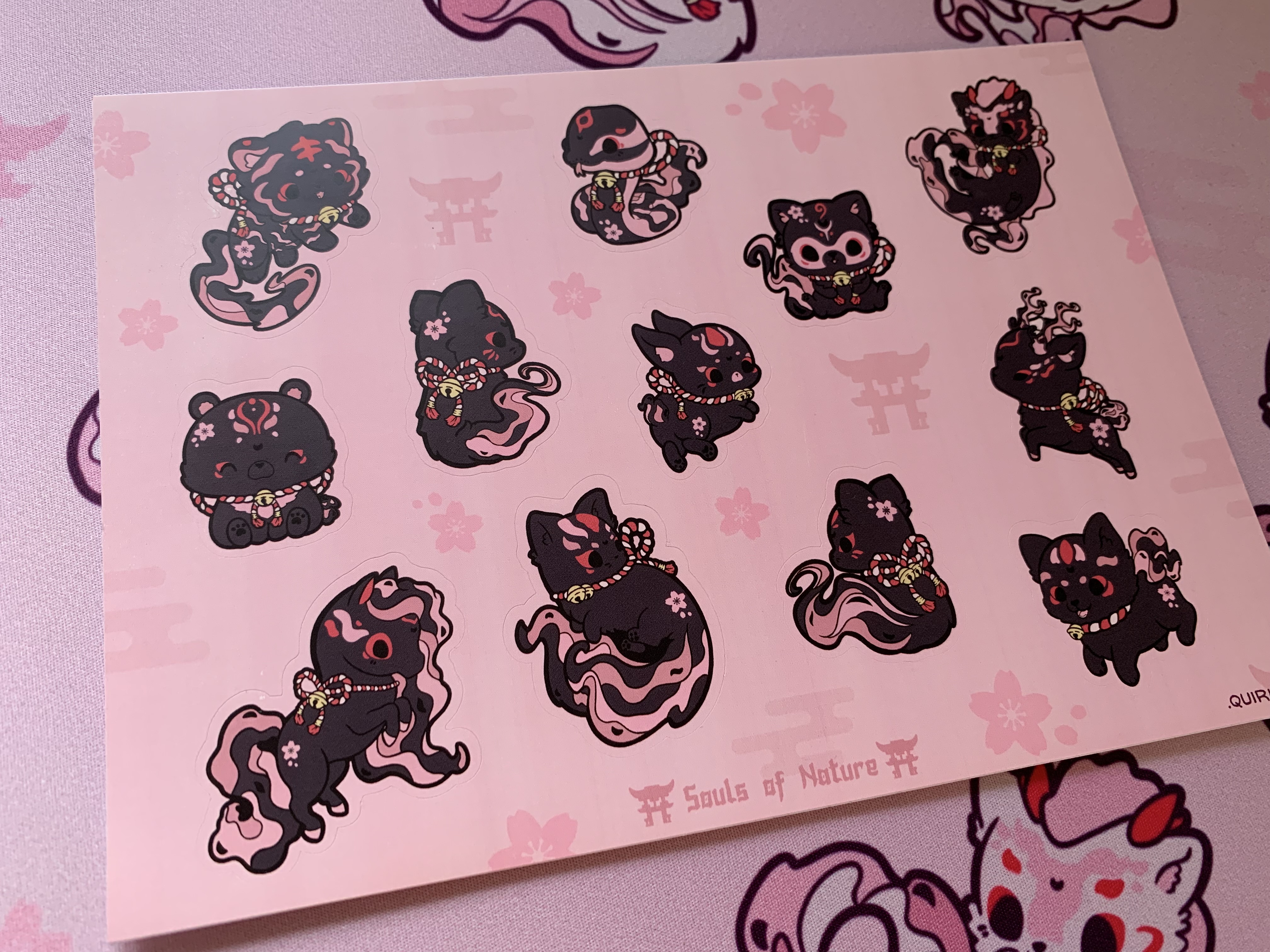 Finally I received not one, not two, but five sticker sheets, with all twelve designs, as well as the four colour variants, and the special colour variant too! I definitely plan on sticking these places soon, which I’m really excited for!

Overall, I really love the Souls of Nature collection! I remember Quirkory giving their Patreon subscribers a sneak peak years ago and I was extremely excited for the kitsune design! I honestly hope they bring these designs to their store in the near future, as they deserve to be and not just a Kickstarter exclusive collection. 🙂

Some of the designs I’d love to own as enamel pins in the future are the kitsune, okami, shika, and tatsu. They’re such gorgeous designs and I do semi regret not getting them previously.

I’m going to add all of Quirkory’s social media pages and especially their store below:

What do you guys like the most about this collection? I do love everything if I’m honest! It was such a gorgeous collection from Quirkory and since then they’ve brought out some more adorable collections, including Delicows and Baukery.

Which design(s) did you like? What colour variants would you put with them? Let me know all your thoughts in the comments!

Until next time, I hope you have a lovely rest of your weekend guys and take care!