It’s well and truly March already and I can’t believe it! 2022 is flying and I’m not ready to be a quarter of the way through the year so soon.

I feel like I said the same last month, but I’m rather excited for March, purely for a new month after how crap the last one was. Don’t get me wrong, February wasn’t as bad as January for being really poorly and skint after Christmas, but with everything that’s happening in the world right now, I think a few of us can agree that February was shite… Especially towards the end.

This being said, we can’t bad mouth the end of February too much and if you’re a Pokemon fan, you’ll know exactly why! We had the Pokemon Presents for the 26th Anniversary and DAMN the ending was amazing and something some of us didn’t see coming. The announcement of Pokemon Scarlet and Pokemon Violet, generation nine in the franchise was announced, with some sneak peaks of the game as well as the three new starters. The generation nine games will launch later this year, which I’m so excited for! I’ll definitely be booking some time off work to play it like what I did for Pokemon Sword and Pokemon Shield as well as Animal Crossing: New Horizons.

Anyhoo, let’s get on with this wish list! I’ve really struggled with it this month as at the start of 2022 I said to myself I’d be better with money and so far, it’s going pretty well, which I’m really proud of! I’ve got to a point however where I go to buy things and instead sit and think, “Do I REALLY need this?” and “What could that items cost get me instead/be used towards?” which has really helped. I recommend it for anyone who is trying to save monies. 🙂 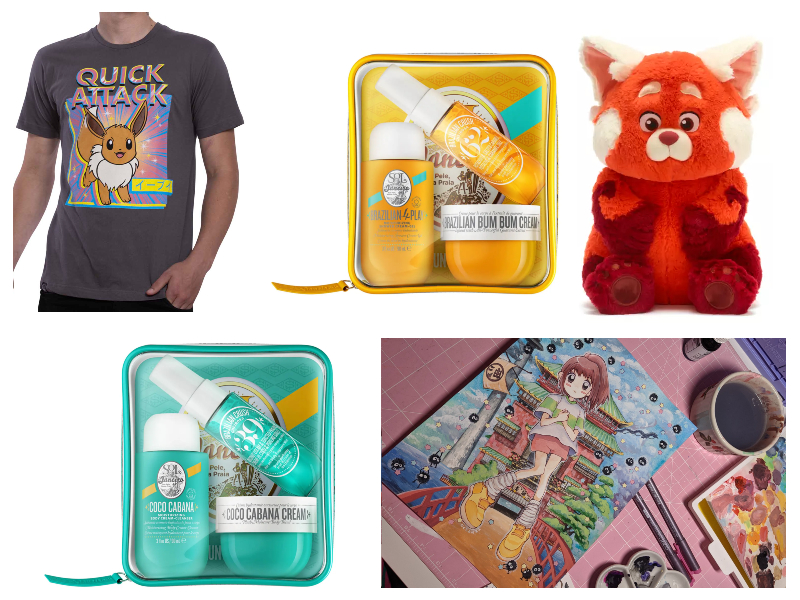 Since the UK Pokemon Center opened online, I’ve kept my eyes peeled every other day for what new items they may add to the website (I have grails I’m hoping to get eventually!), and a few weeks ago I noticed this Eevee t-shirt landed on the website. I love the Eevee design, it’s so adorable and the “Quick Attack” text above it just reminds me of whenever I play with Eevee in my team. This isn’t exactly cheap at almost £25, but it’s definitely cute and official Pokemon gear is always great as well. I don’t know if I’ll pick this up anytime soon, but I would love to snag it eventually.

This is a print I’ve already ordered technically, as I signed up for the Patreon at the end of February. Ocean In Space‘s designs are so beautiful and really are works of art and I adore them all. However, when they announced they would be doing a Spirited Away design with Chihiro, I knew I had to get it! I waited until February payday and made sure to back their Patreon and snag it as soon as I could. I’m honestly so excited for this to arrive already! I already own the Nana print from Patreon at some point last year (which I also wrote about and you can read here) which I adore, I just need to get a frame big enough for it. 😛 I semi regret not backing for the washi tape and stickers now, but meh… I wanted to save money and just get things I’d make use of. I think I’ll look at having this print up in my office by my desk, the same as my plans for the Nana one too.

If there is one thing I’ve really missed having in my shower the past fortnight, it’s a yummy scented shower gel. My bottle of Snow Fairy finally ran out at the end of February and I’ve been after something nice to replace it since. I thought about getting something else from Lush but their shower gels are shockingly priced for what they are, plus, I didn’t like the look of anything. I’ve heard nothing but good things about Sol de Janeiro and their bum bum cream (especially its scent!), so I thought I’d have a look to see if they do shower gel, which they do! 😀 The scent of this sounds divine, as it’s described as being caramel-pistachio. HOLY SHIT GET IN MY SHOWER! I was too busy trying to be good that I missed out over last weekend when offers were flowing. However, as Mother’s Day is coming up and I know my mom wants to try Sol de Janeiro, I decided to grab a couple of the jet set gift bags for us, one each of the Bum Bum and Coco Cabana, making each set less than £20 with the discount codes I had. I’m so excited for these to arrive and I really hope me and my mom love our goodies. I’ve really been meaning to keep on top of my beauty regime now, my body has been struggling and felt really tight and dry. I’ve been slathering body cream on more than ever this week and my body is already appreciating it. 🙂

I’m going to pop my Look Fantastic referral code here. You’ll get £10 off your order if you use the code, but bear in mind you must spend a minimum of £30. Click the link and the discount will auto apply at checkout. 🙂

My friend Sacha on Instagram brought my attention to the fact the Disney Store had released Turning Red merchandise, as well as a HUGE Mei plush! I’ve been so excited for Turning Red coming out, that I vowed to buy one or two pieces of merch when it launched in shops. This plush is large and is something I knew I had to add to my collection. My only worry at the time was, “Where is it going to go?!” I’ve had it a few days now (at the time of writing this post I’d just ordered it…) at the point of this post going live and I adore it. I’ve also found it a home, my office chair. When I’m working on stuff at my desk (work and personal), as well a playing games I can have a snuggle of it to relax me. So far, it’s really helped my anxiety and kept me calm. Ironic really considering what Turning Red is all about, eh? 😛

So there we have it, my wish list for March. I know it’s a little bare this month, but I really am trying to be better with my monies. Some of the items in this post have been ordered/arrived but this makes a nice change, as usually I add stuff to my wish lists and either wait months to purchase and sometimes don’t buy at all!

What do you guys have on your wish lists this month? Make sure to let me know in the comments!