Wow as if it’s October! At this point in time it is now less than 100 days until Christmas… Crazy, huh? I’ll have to start my Christmas shopping VERY soon!

As with my September favourites I’m writing this post before I go on holiday and DAYUM IT’S HARD! I don’t actually know what I have on my wish list right now really… I’m sure I can find some goodies to add to this list, eh? 😛

EDIT – I soon found stuff that I had forgotten were coming out this month! 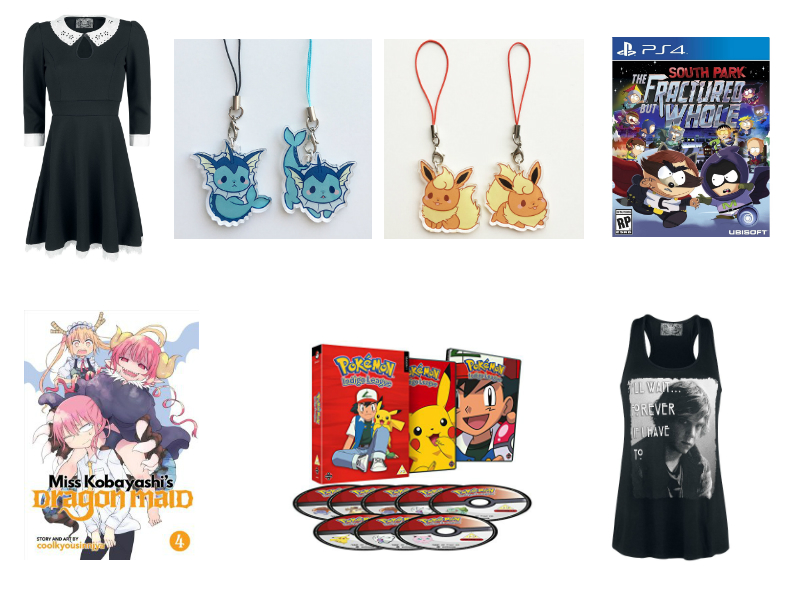 This is a dress I actually wish I had bought before going on holiday, even though I doubt I would have worn it there. I was eyeing up this dress before I’d even started watching AHS due to the cute Wednesday Addams style to it. From what I’ve seen on images and video this dress looks thick and well worth the money! It’s actually a part of the AHS collection that came out exclusively for Hot Topic, but it would seem that EMP have a partnership (of sorts…) with Hot Topic as they both sometimes stock the same stuff. I’ll be buying this when I’m back from holiday for sure! I’ll love wearing it with my Dr Martens boots and my red coat.

This is one of my favourite mangas that I have discovered (thanks to the anime, which I love just as much!) and I always wait patiently for a new volume of the manga to come out. The next one has come out so quickly and it almost feels like it’s crept up really… Either way I’ll be ordering this when I’m home from my holiday. I need to really catch up with my manga!

After writing my blog post about JennifairyW last month I KNEW I had to add these to my wish list this month. I really want to get at least one of these and I can see me swaying for picking up one each of these two. I’ll probably opt for the Flareon which is sitting down (on the left) and the Vaporeon which is standing up (one on the right). This being said I love both the Vaporeon ones equally! I’ll see how I feel when I’m back from holiday. I may end up leaving some of these as little present ideas for Dane… Christmas is lurking and I know both me and Dane like to get Christmas presents ordered as soon as we can… 😛

I know you can watch the Pokemon Indigo League series on Netflix BUT they don’t have all the episodes on there! Well they never when I was watching it anyway… This is a series I have been waiting to buy for years now, so even though I probably won’t pick this up at the end of the month, it’ll definitely be on my Christmas list. 😛 Who can say no to some 90’s/00’s feels? 😀

I mentioned in my September favourites post a couple of days that me and Dane have recently started binge watching AHS and how much we love it. So far my favourite character is Tate from season 1 and to be honest if I can get a t-shirt with his face on, I will! I doubt I’d wear this out though. It’d be for chilling around the house in. I’m not really someone who suits tank tops to be honest. Unless I bought this in a size that’s a bit too big for me and wear it with leggings… Meh I don’t know! We shall see! 😛

This is a game that I have been so excited for since it was announced in 2015. I’ve been waiting an anxious 2 years for this game and I’m sure twice they’ve delayed it because Matt Stone and Trey Parker weren’t happy with it. I’m glad they’ve not just released the game to keep fans happy. It looks amazing to be fair and I’ll be getting it on the PS4. I’ll definitely be binge playing this like I have been with Persona 5 (which I should have finished by the time this post goes live…).

I know my wish list this month isn’t anything amazing, but I find that one month I want loads of shit and then another month I don’t. I would have added the Dr Martens from last months post here but I can’t really put them in again! 😛 After the holiday I doubt I’ll be buying much for a while. I want to try and save some money for Christmas now.

What items do you have on your wish lists right now? Make sure to let me know in the comments!

Until next time, take care all and I hope you’re having a great week so far! I’ll be back in the UK tomorrow… Sad times. 😛