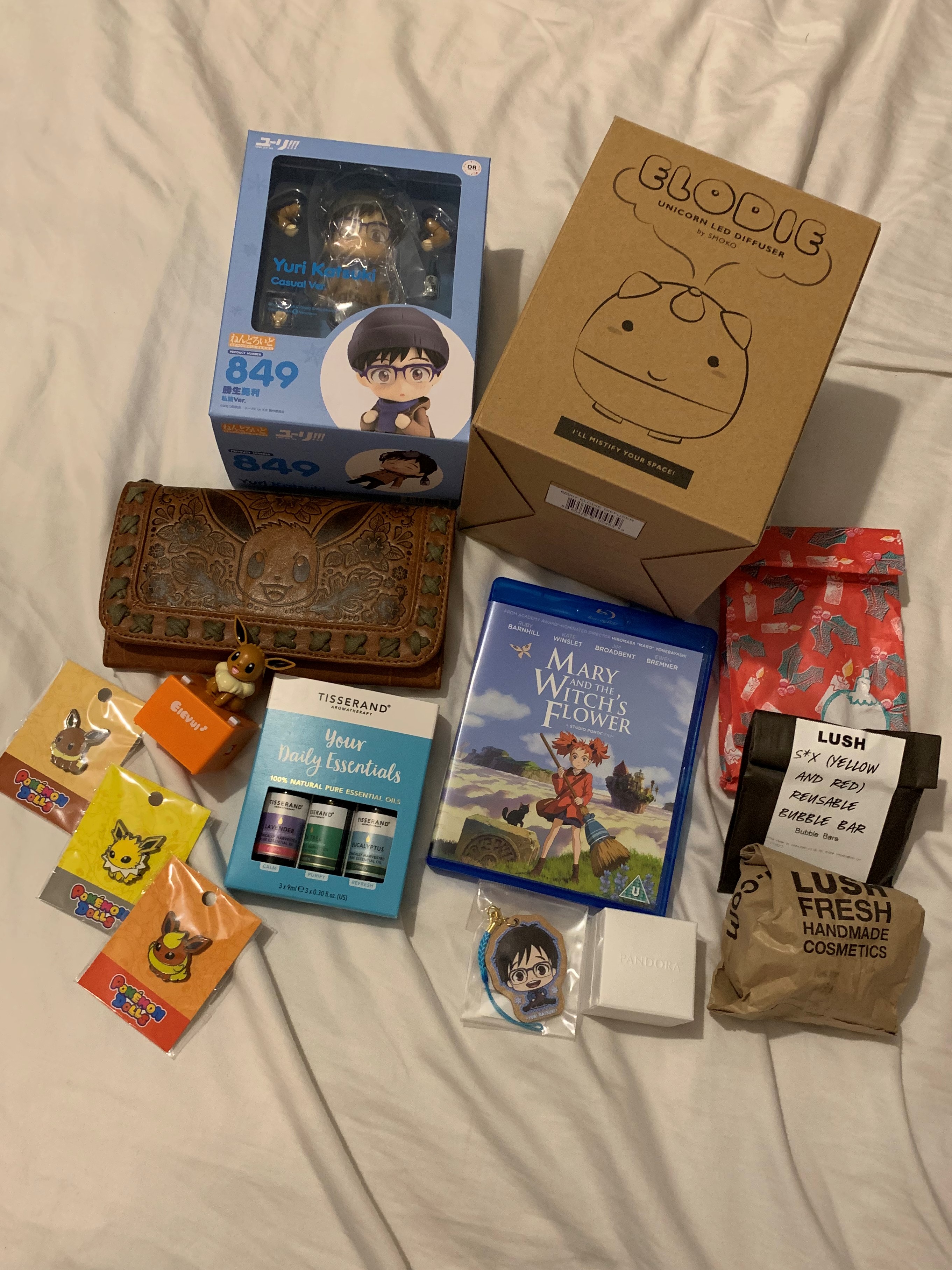 I cannot believe we’re nearly two weeks into January! The month is already going by quickly and I cant say as I like it. 😛

As I always do, I thought I’d write about what gifts I received for my 29th birthday. Like Christmas, I love reading gifts that people receive for both that and of course for birthdays too!

Since the 21st December I haven’t stopped and this weekend I’ll be doing sod all! I just want to relax and not worry about doing anything in all honesty. The only thing I want to do is clean my bathroom and play games. 😛 Nice mixture of adulthood and childhood right there. 😛

Anyhoo, without further ado, I’m going to show you all the wonderful gifts I received! 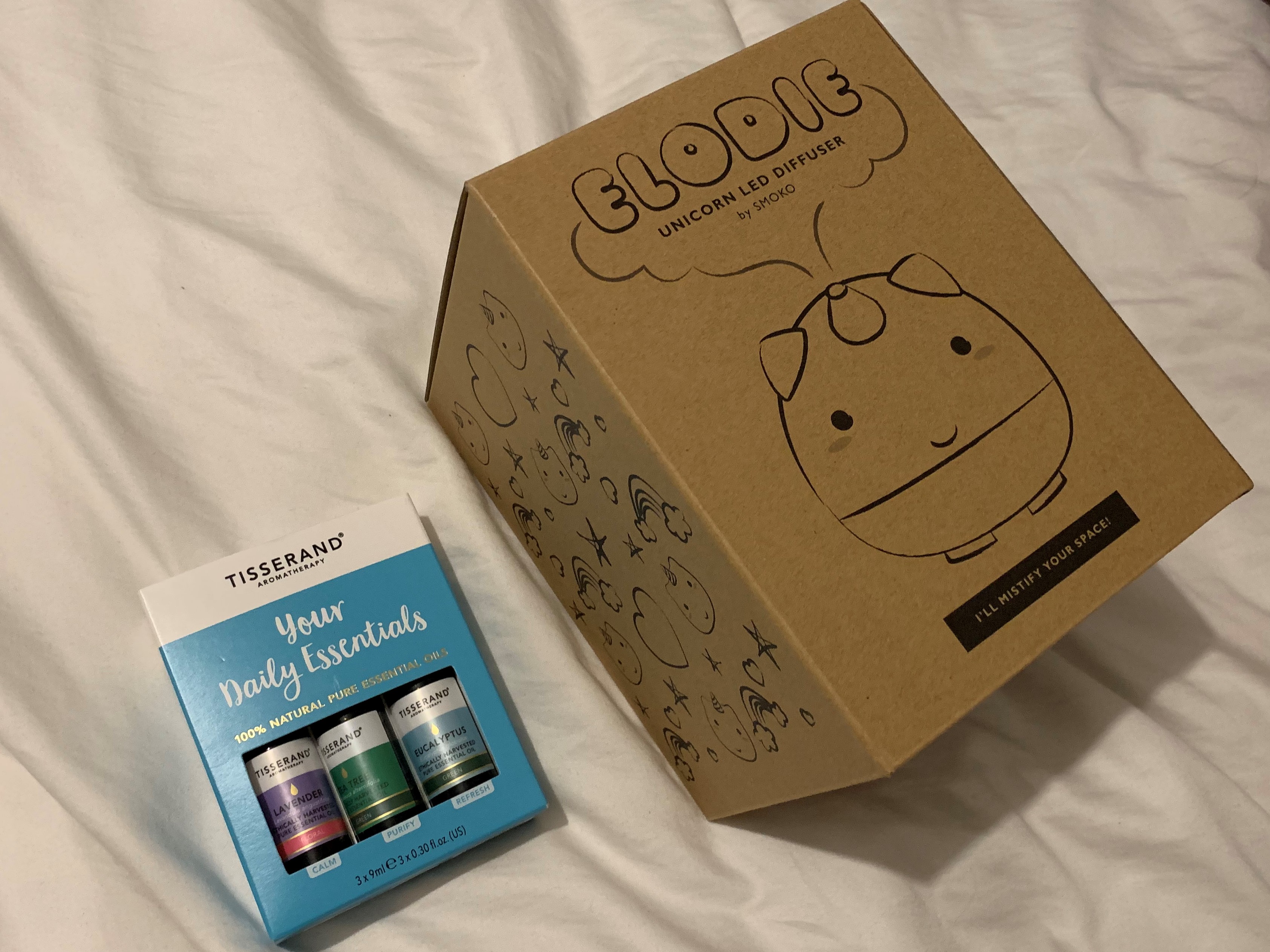 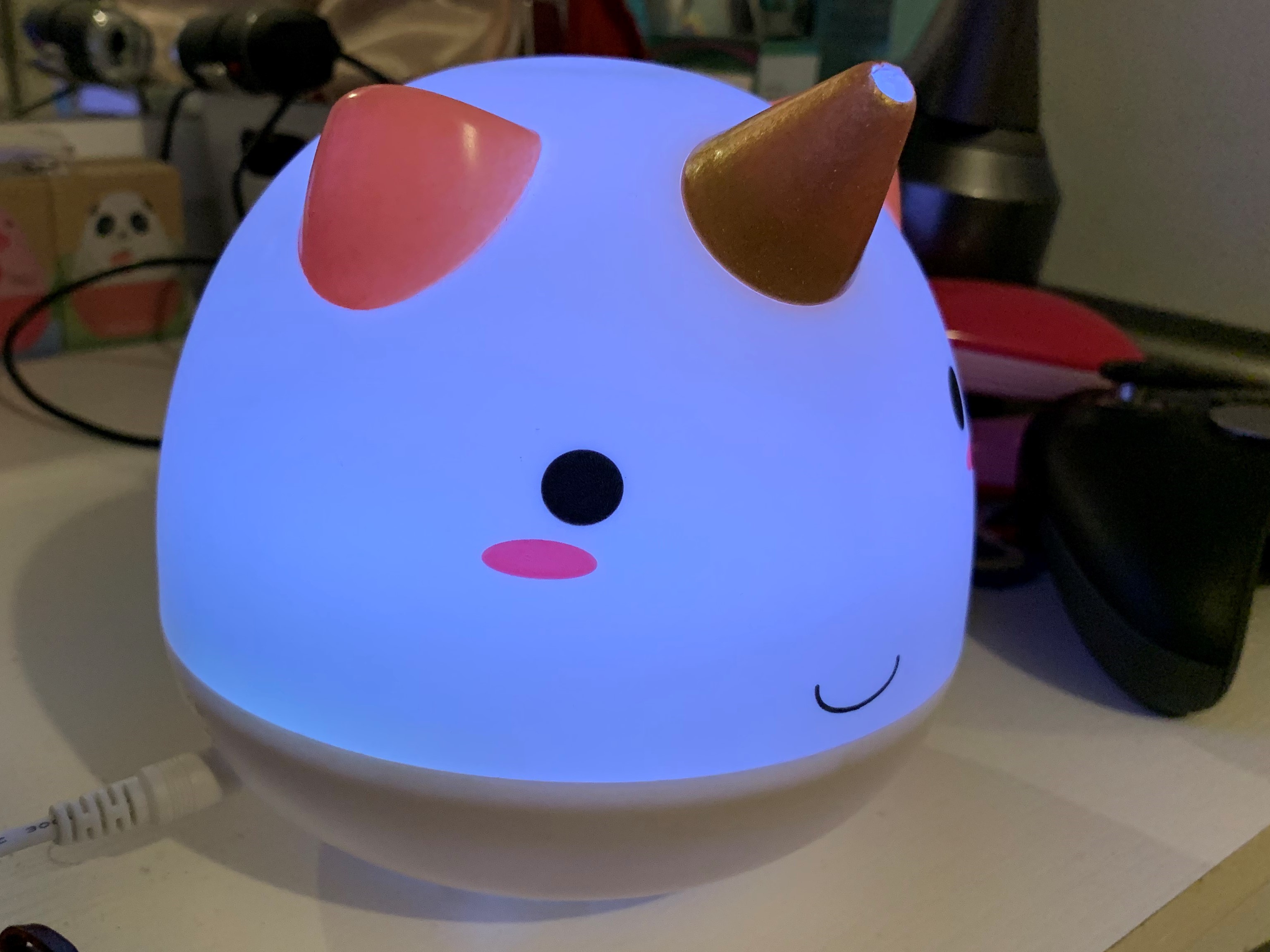 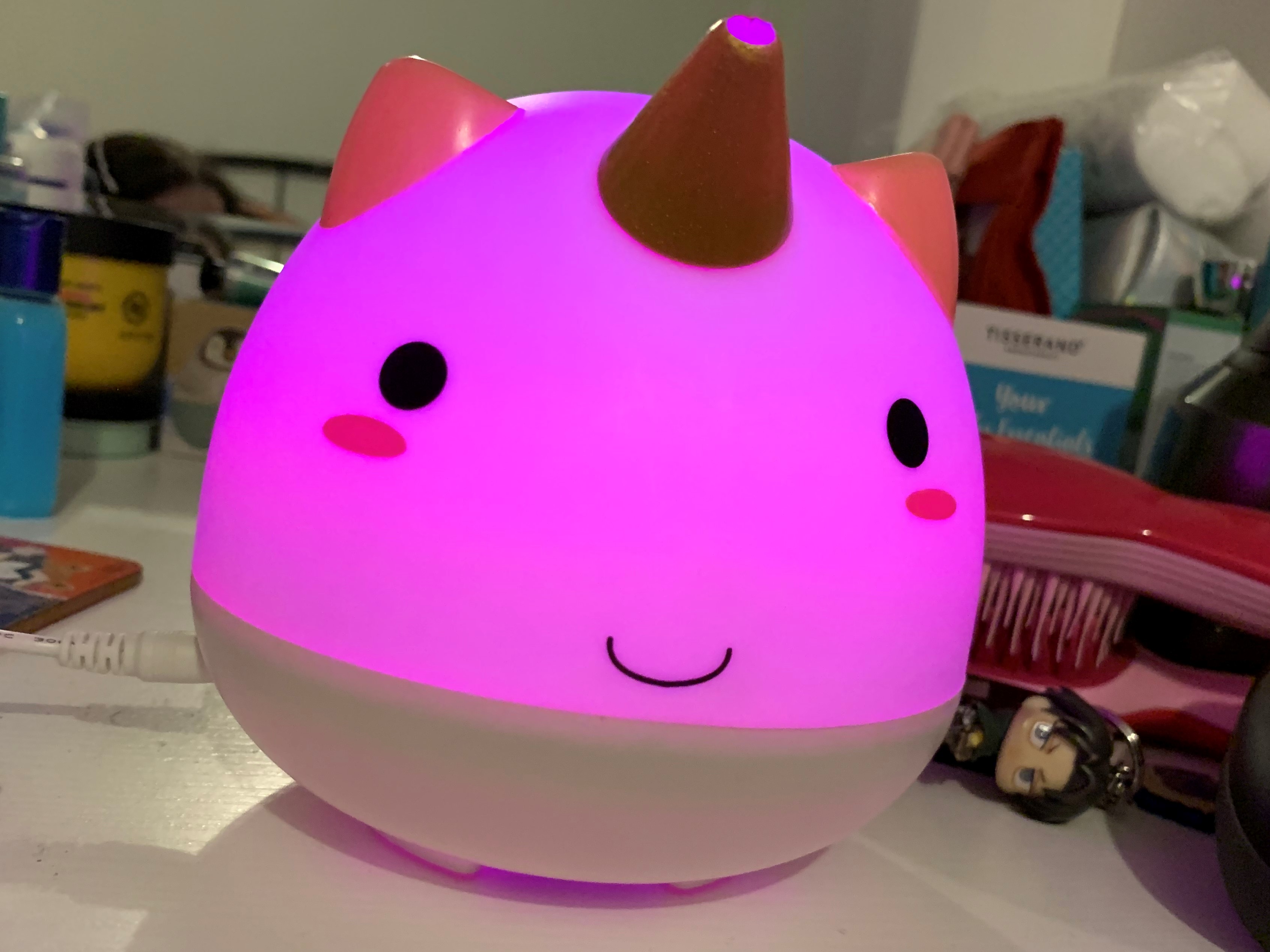 I started off the day by opening with Dane’s parents had bought me, which I was surprised by! I couldn’t believe that they’d not only bought me the Elodie the Unicorn humidifier as well as some essential oils to use with it! There are three essential oils in the box which are lavender, tea tree and eucalyptus. Since Sunday night we’ve been using this every evening whilst we sleep and it works so lovely! So far I’ve used the eucalyptus essential oil as I’ve felt like I’ve had a bit of a head cold the past couple of days and it works so great!

Seeing as this is an Elodie the Unicorn item and I’ve mentioned their stuff before on my blog, would you like me to review this humidifier? Make sure to let me know in the comments! 😀

After opening my adorable humidifier I opened the gifts that Dane had bought me. I was rather excited for what he’d bought as bar one thing, I didn’t have a clue about the others! 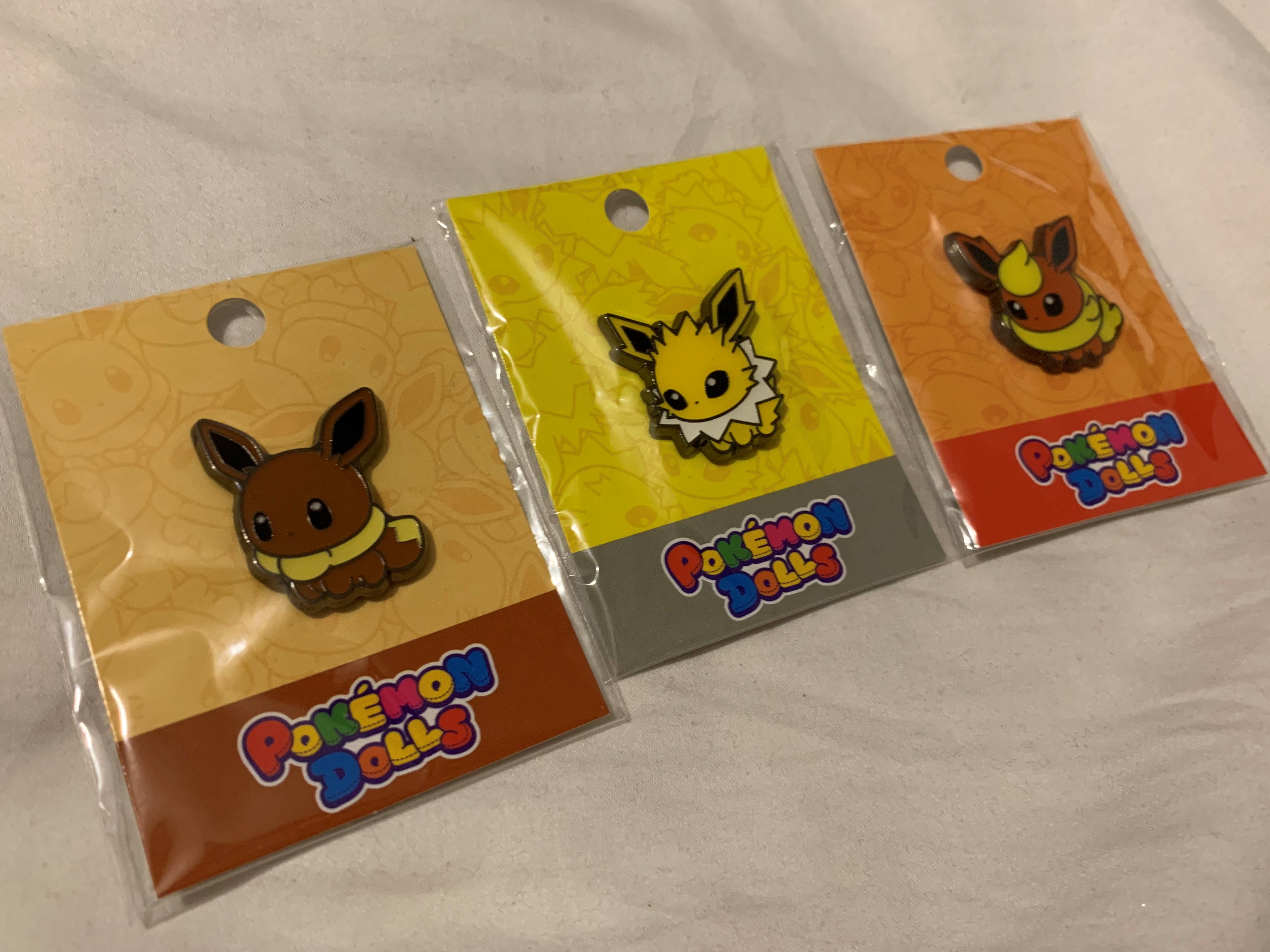 First of all the item(s) I knew about receiving are these amazing Pokemon Center Pokemon Doll pin badges! I started to collect these over a year ago and had been picking them up in dribs and drabs. As there was three I was missing, I decided I wanted to finish off my collection, but that was proving easier said than done considering these seem to now be discontinued. Then I found the three I needed on Asakura-Japan, an eBay and online store me and Dane use whenever we’re after certain things from Japan. I’d asked Dane for these for quite some time whenever he asked what I wanted for Christmas, birthday etc and Christmas he finally decided to order them! However, they got lost in the post and it sucked. He felt guilty and seemed a bit bummed about it as it seemed the Royal Mail had misplaced them at our local depot. He got his money back though and the seller offered Dane a discount so he could reorder them, which he was hesitant to do. However, I really wanted the pins so ordered them myself with a discount code I had myself for eBay. Dane being Dane sent me the money I’d spent on the pins and when they arrived he wrapped them up and popped them into my birthday bag. 🙂 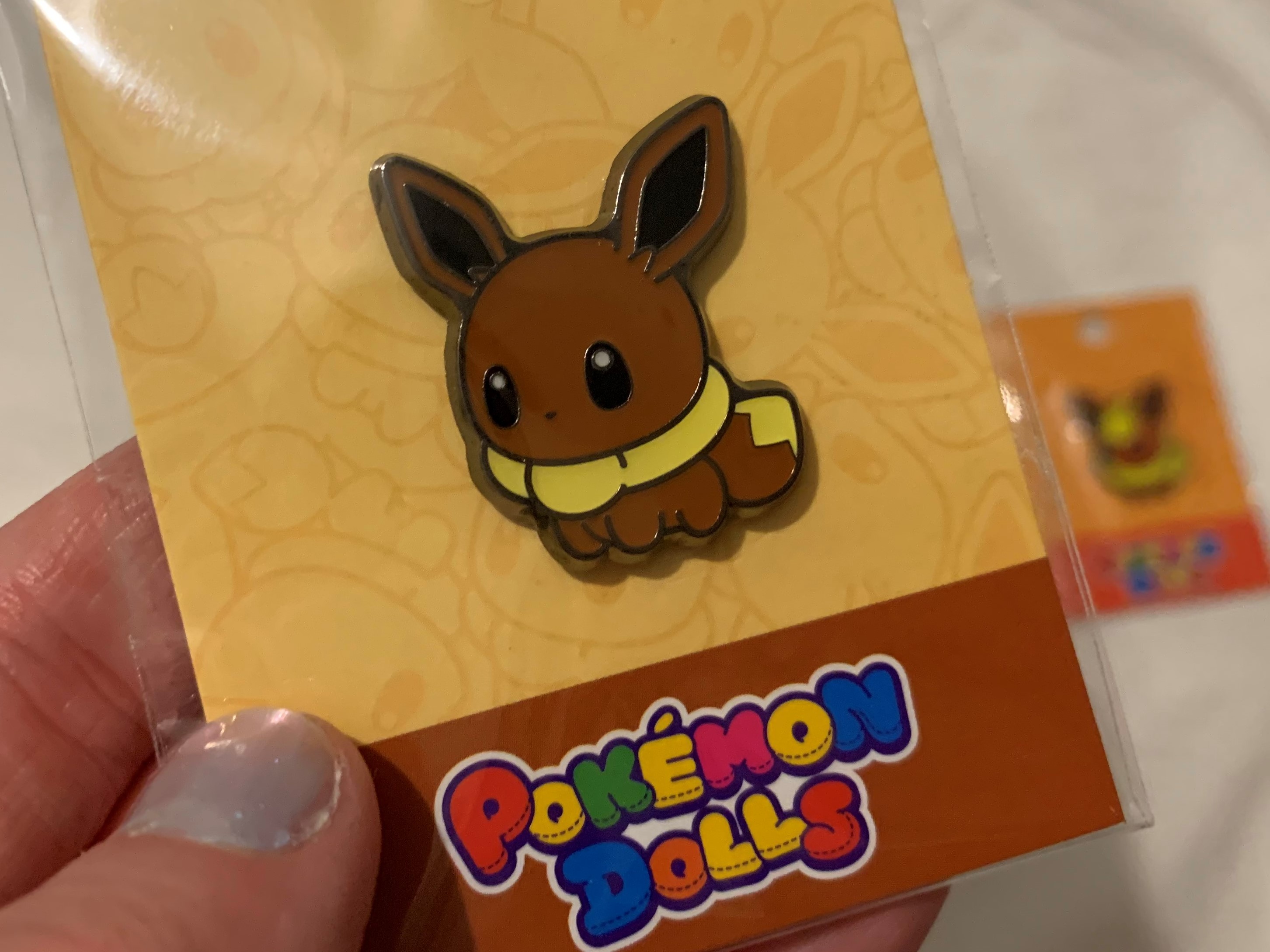 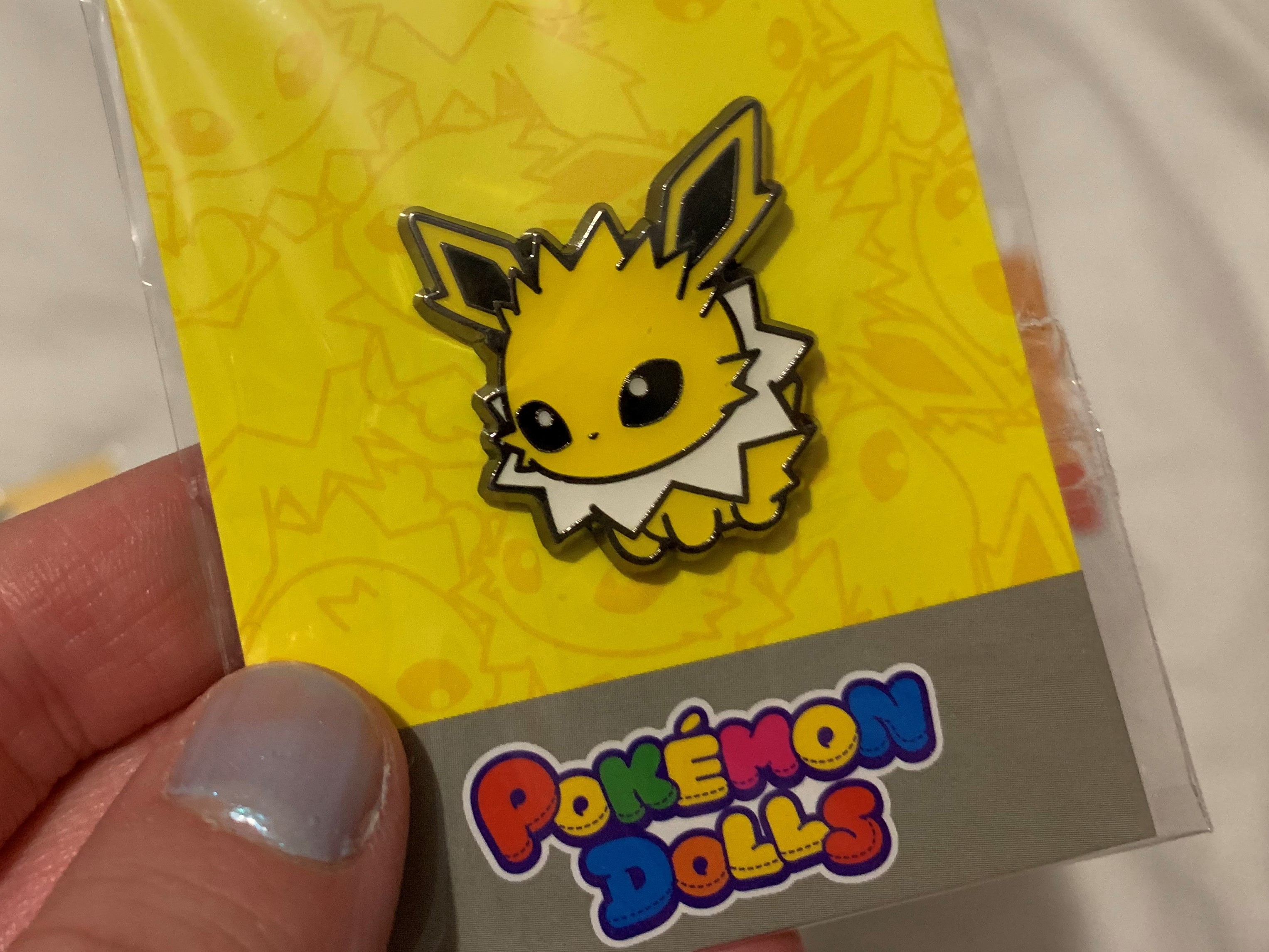 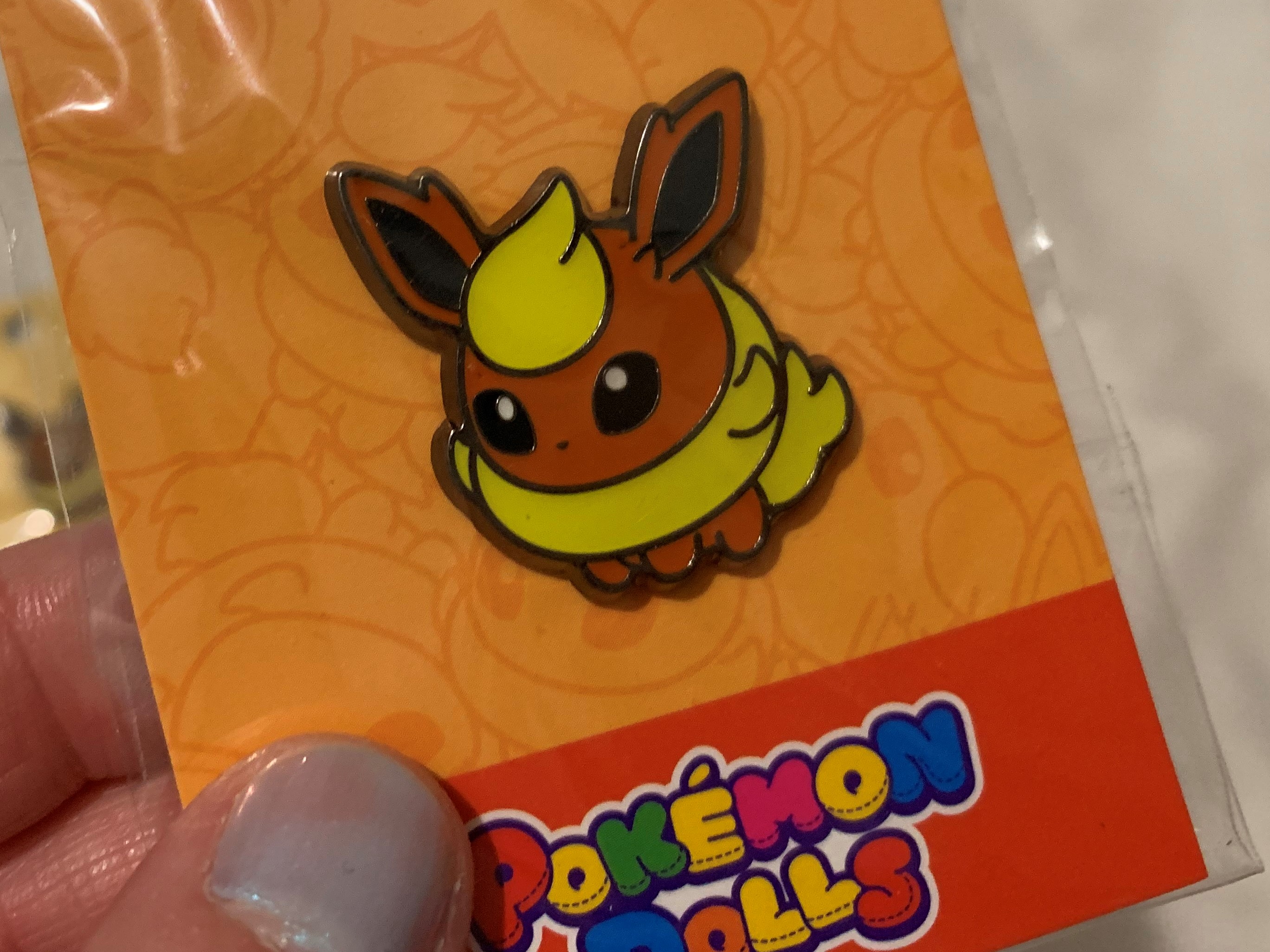 As you can see I have three of the original four Eeveelutions, Eevee, Jolteon and Flareon. I’m so chuffed to have all 9 Eeveelutions pin badges now! I plan to buy a frame and some cork board from IKEA so I can make a nice little frame to hang up in the house. 🙂 I’ll definitely post about the making of this as and when I do it!

The next gift I received I had a feeling was a Nendoroid, but when it comes down to these gifts both me and Dane always open them last as they’re classed as our “big” or “main” presents from one another. I wasn’t quite sure which Nendoroid it would be in all honesty as I know Dane struggled to get me one as most of them I want right now I’ve either pre ordered myself, or are sold out in most places. 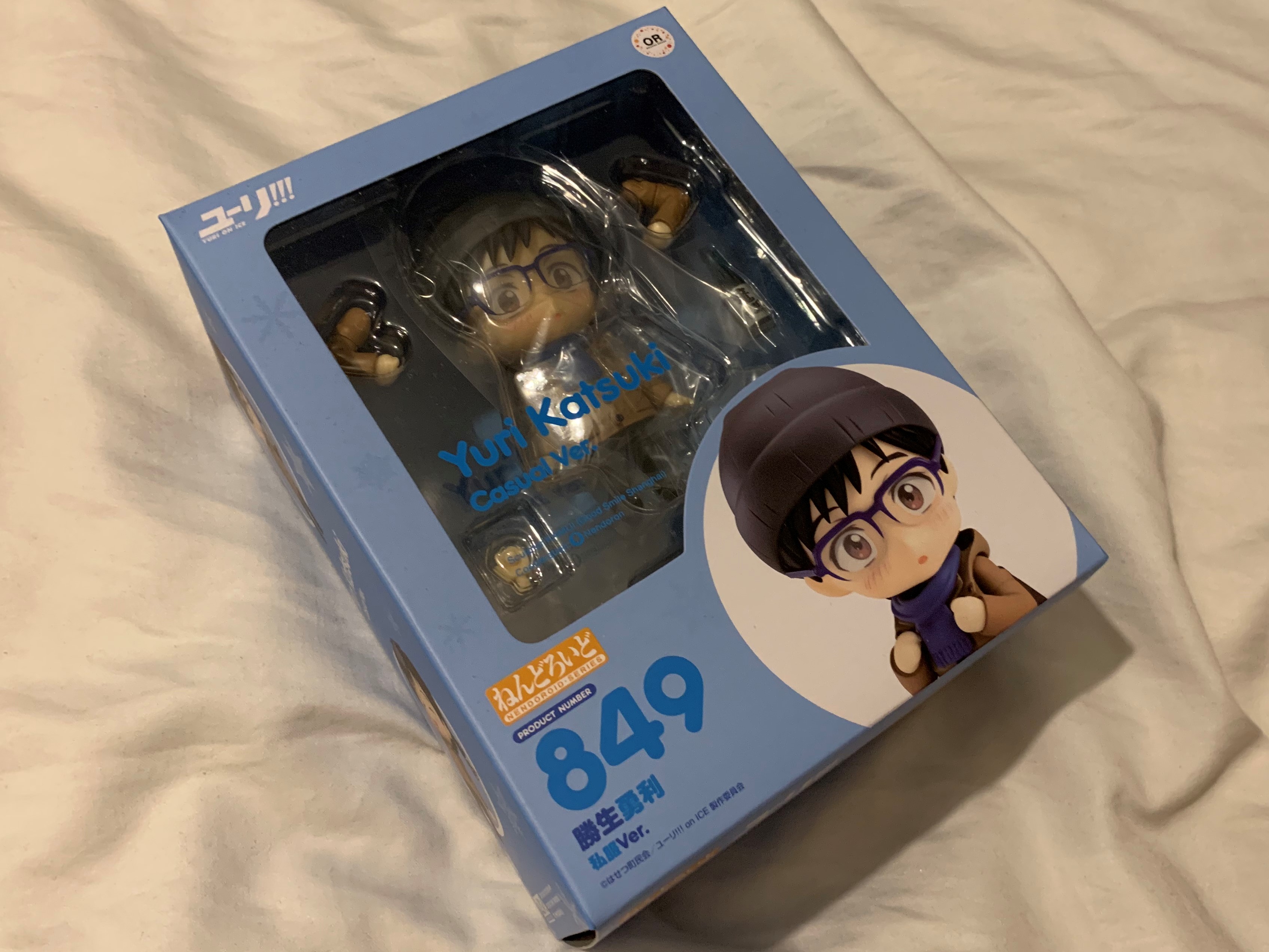 Alas, I opened it to see he’d bought me the casual version of Yuri Katsuki from Yuri on Ice. He’s so gorgeous and in all honesty I worried I would never get it to add to my Yuri on Ice collection. I remember when he was announced, I was so excited for him to come out so now that I have him, I can’t wait to get him into a cute position and pop him with the rest of my Yuri on Ice babies! 😀 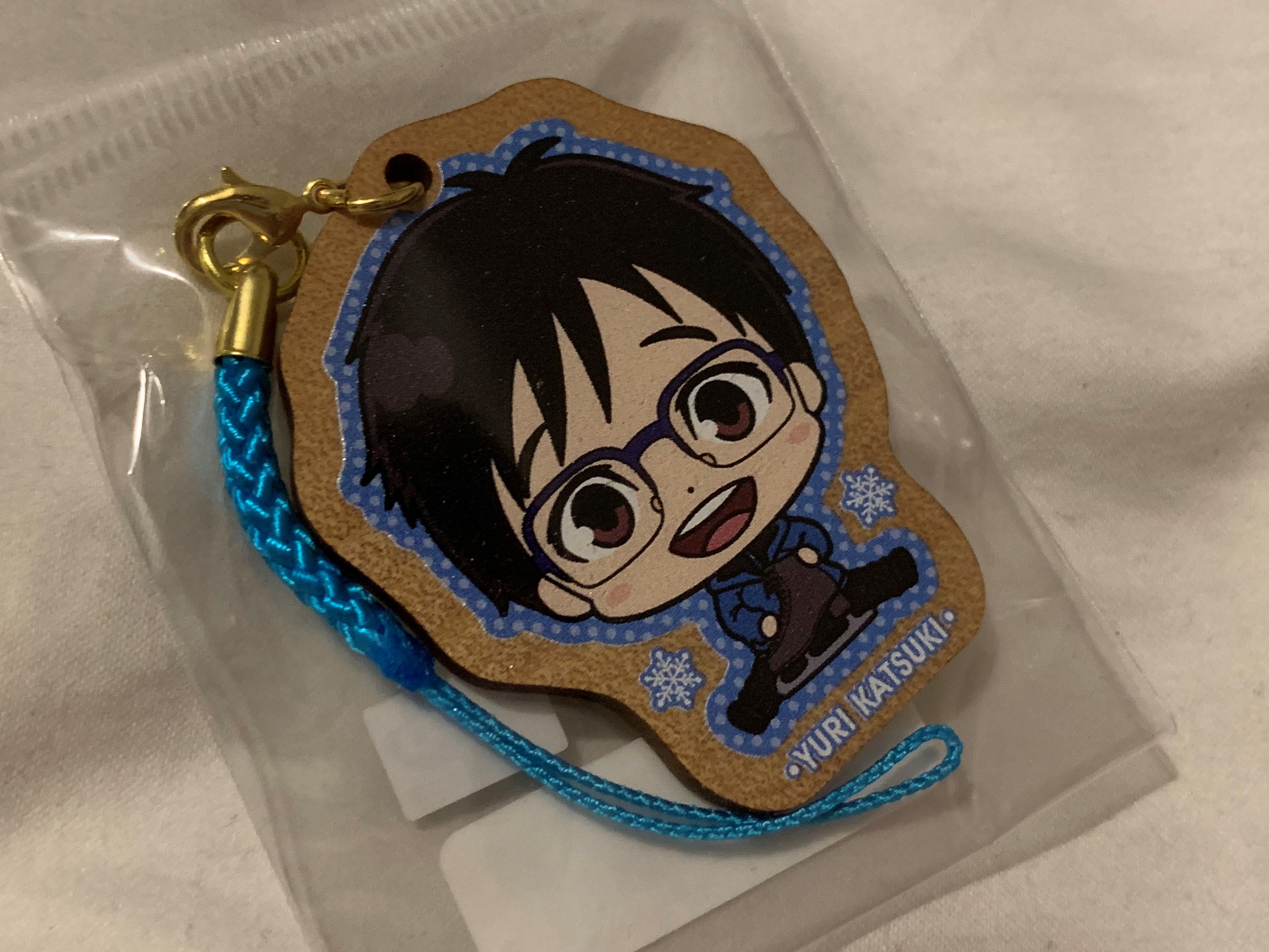 The Nendoroid also came with a wooden Yuri Katsuki charm, which is so cute! He’s sat on the floor with an ice skate in his hands. I plan to keep him on my backpack alongside my Persona 5 Joker charm. 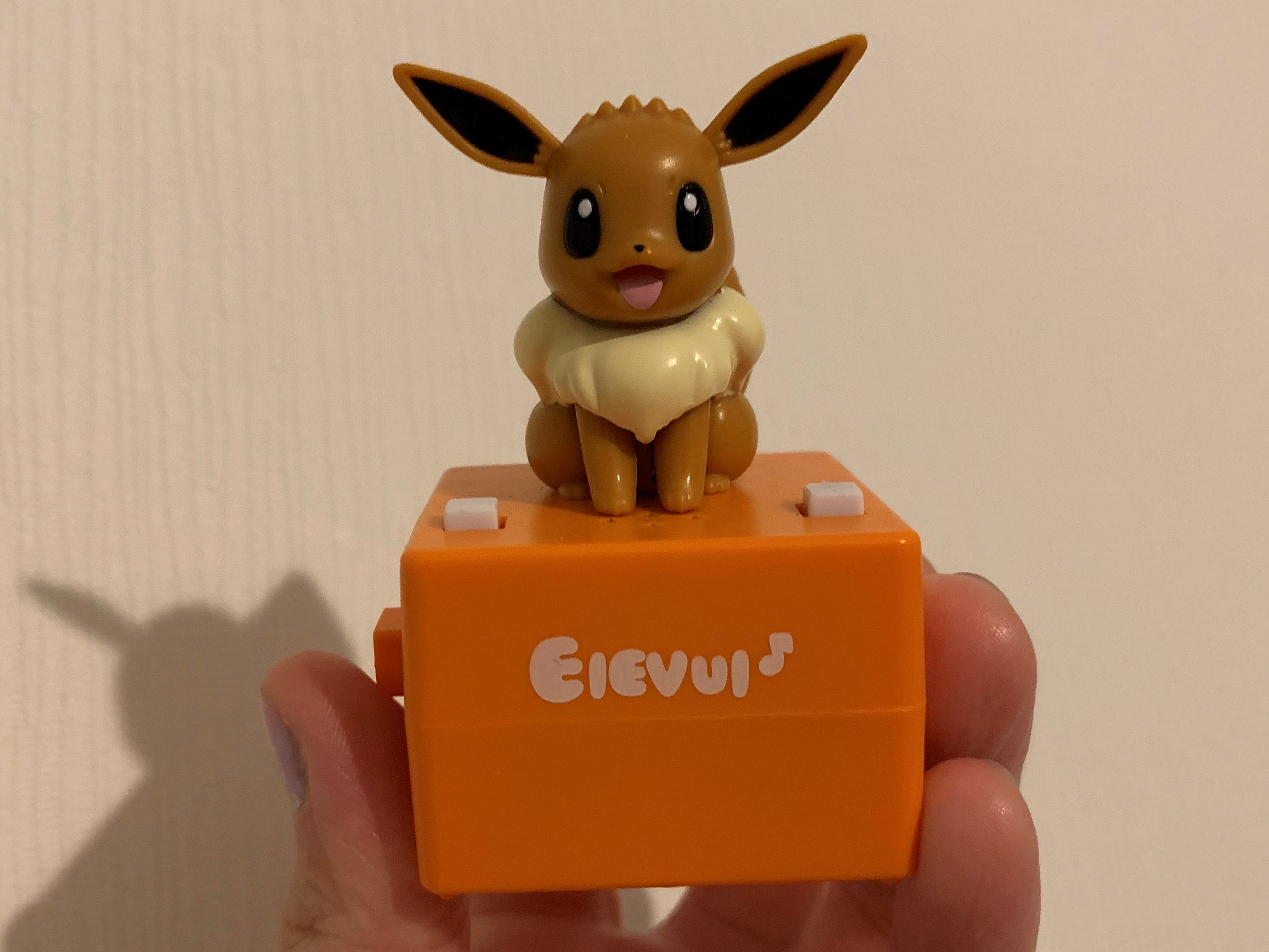 The final present that Dane bought me is by far my favourite gift and one that is so cute and thoughtful. He knew I’d had my eye on the Pokemon Pop’n Step figures for a while now and being the cutie that he is, he found the Eevee one and bought it for me. I actually think with this present he was more excited for me to open it than I was! 😛 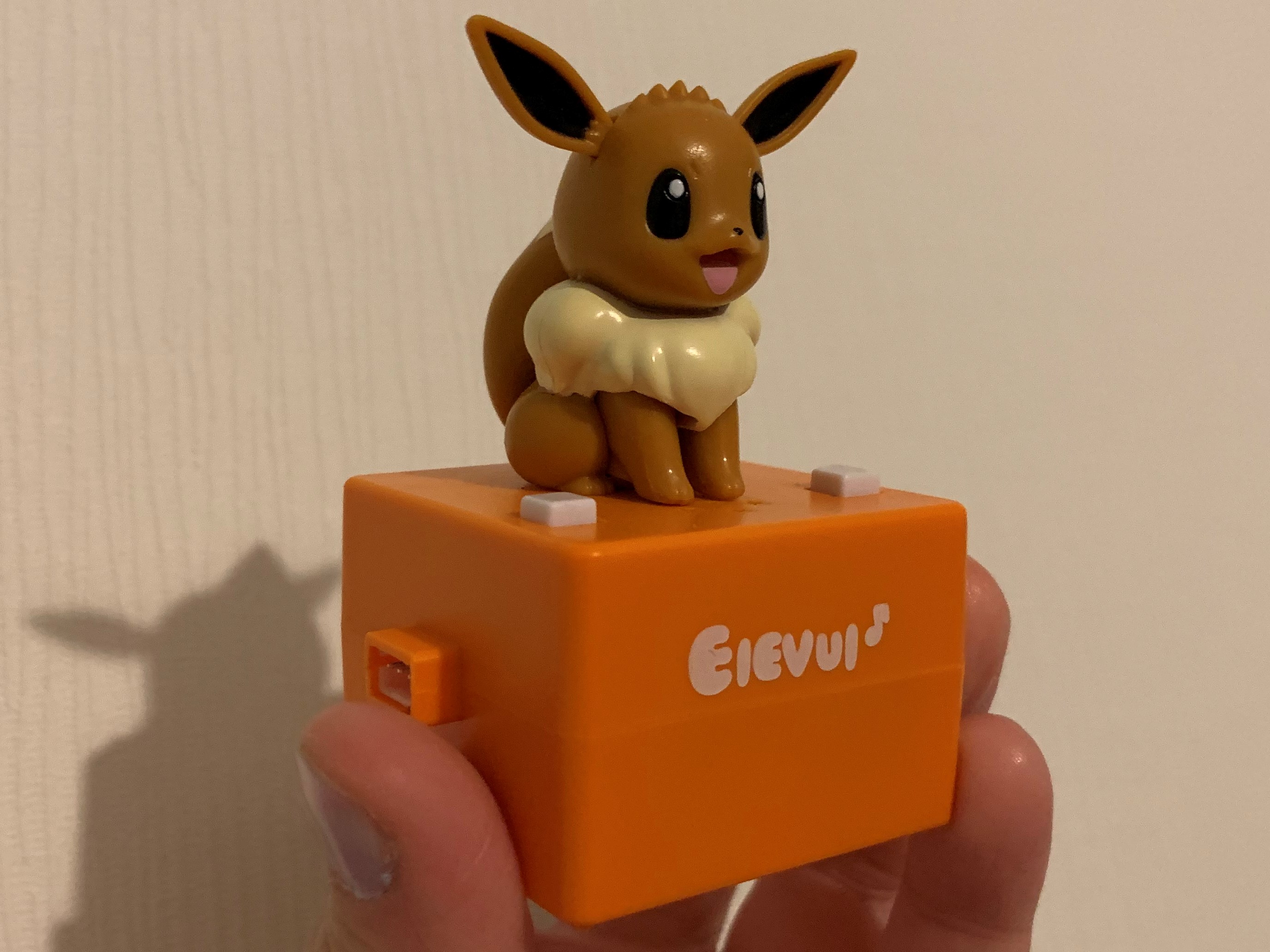 This is amazing though and I couldn’t be happier with it! It plays three songs from the original Red, Blue and Yellow games which is cool. You click the button on the right and Eevee will dance to the music played. If you push that button again it stops the music. The button on the left is the volume, which is muted, low or high. We tried muting the music so you could hear how Eevee dances without it and it’s amazing that you can still tell what the songs are without the music.

I especially love how you can connect these to the other Pokemon Pop’n Step figures, but this is also dangerous because I want them all now. 😛 Honestly though I love this gift so much, it made me so happy for almost an hour the day I received it and the day after. The Eevee’s little face is just so magical to look at whilst it dances. 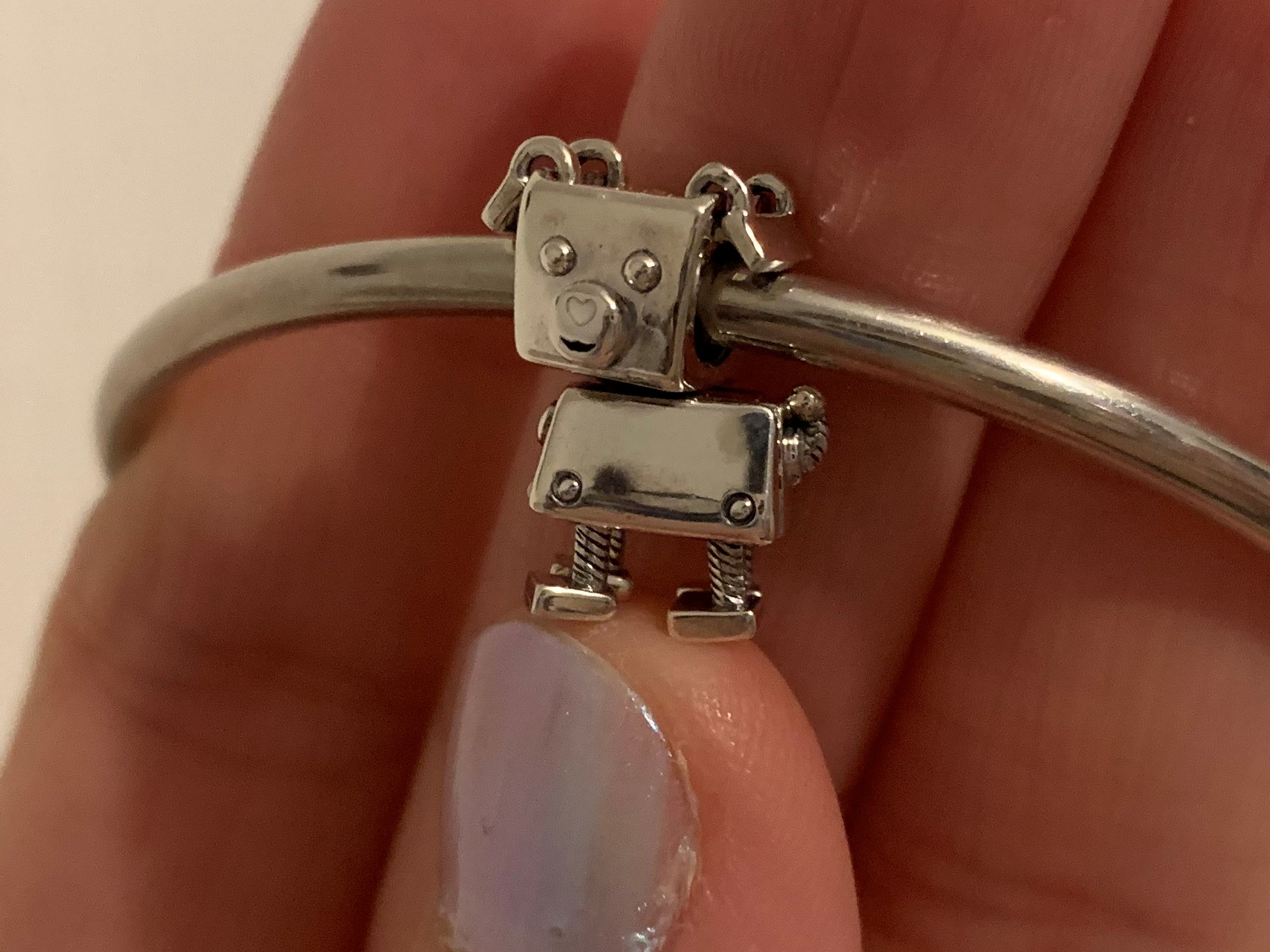 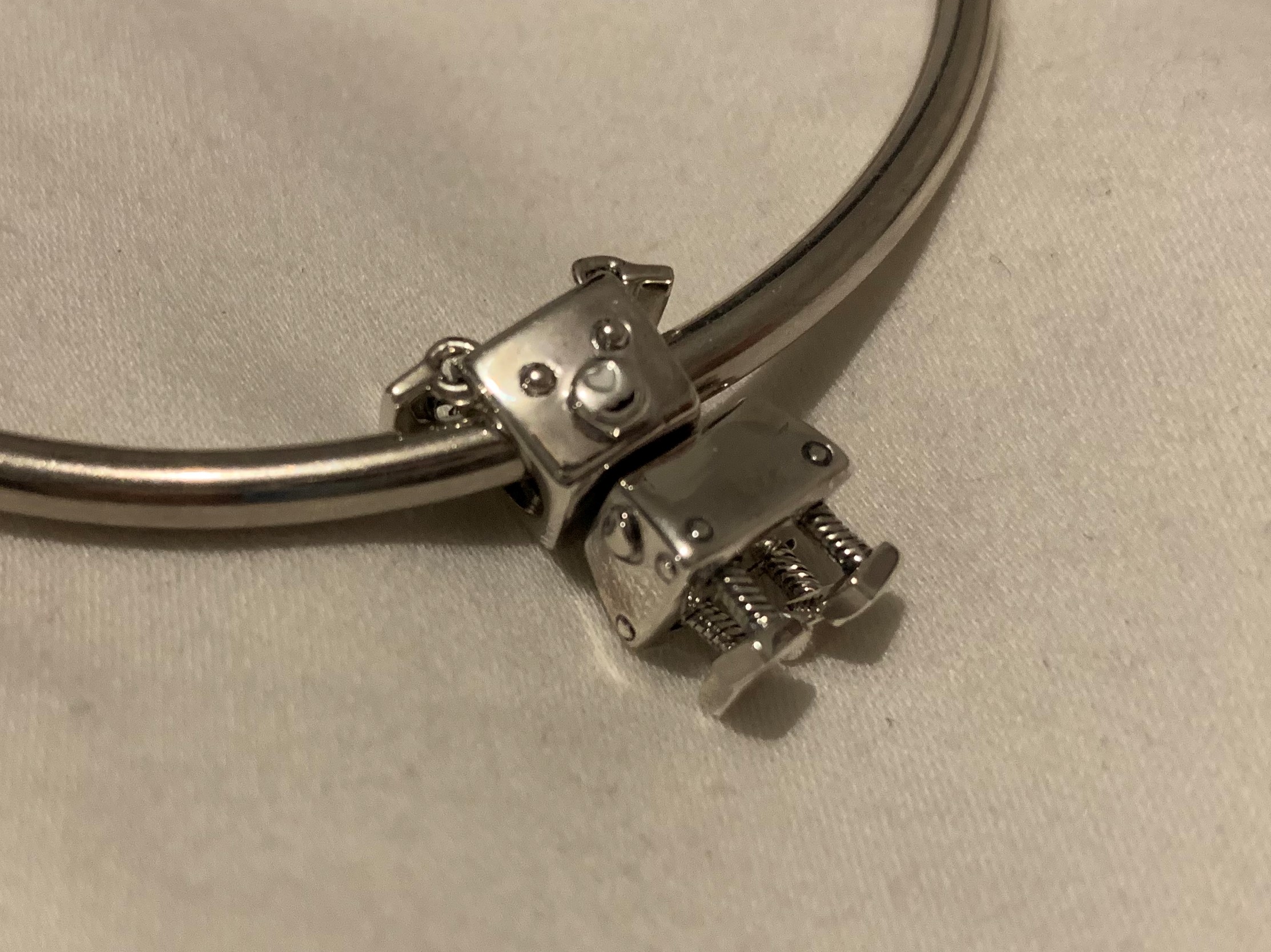 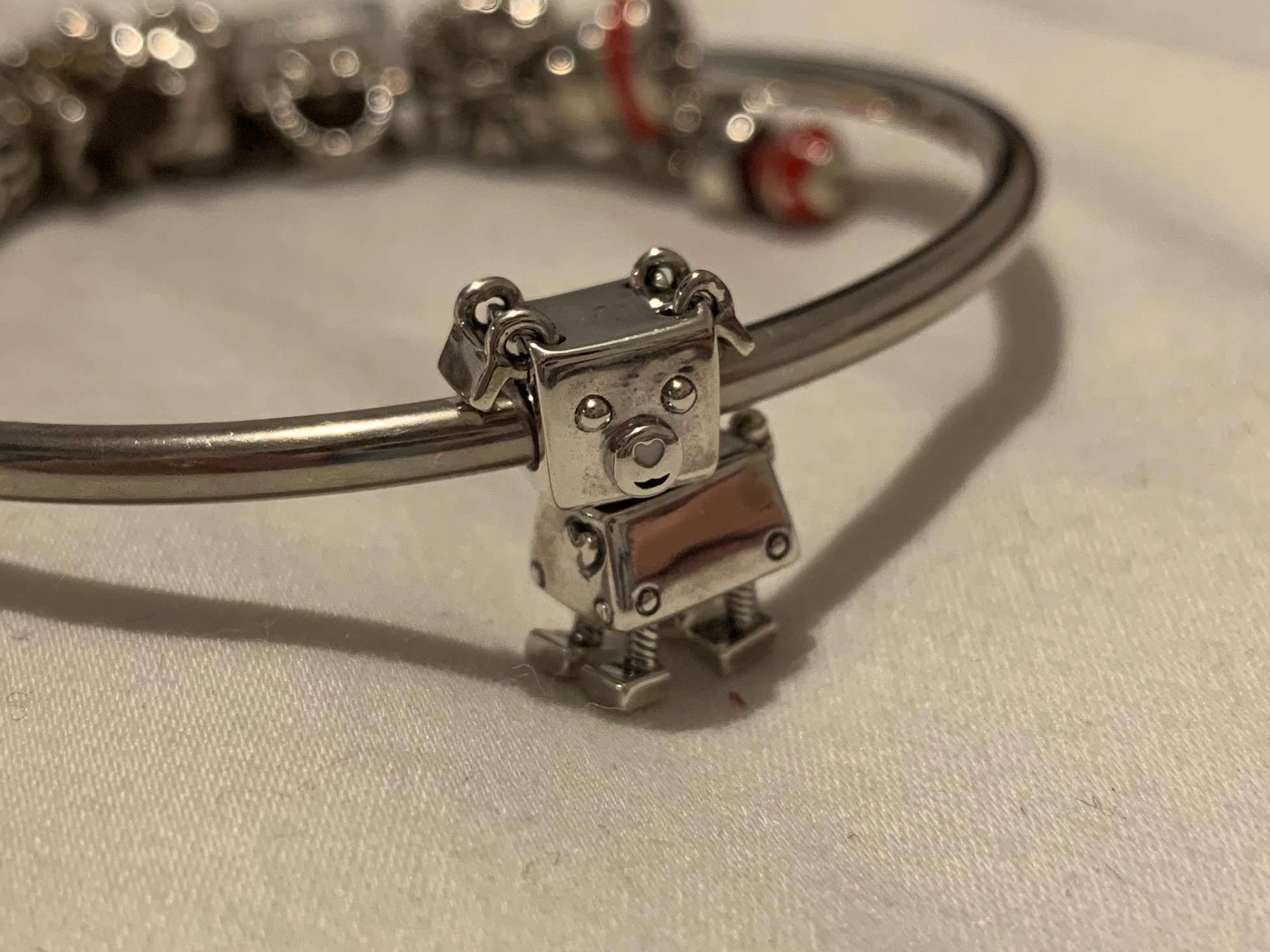 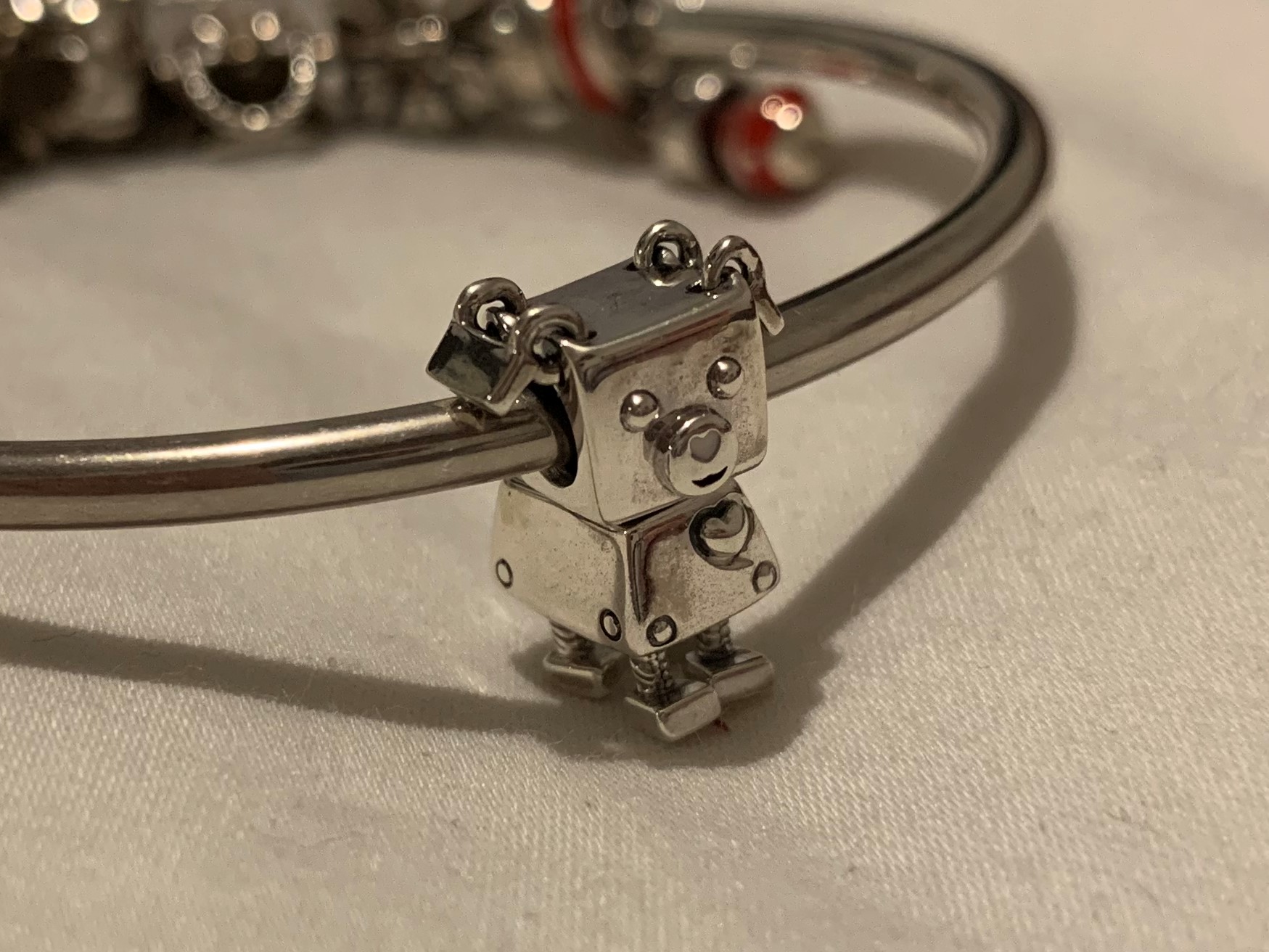 So those are all the gifts that Dane bought for me! I also received some money from family. The money I was gifted from my mom is being saved until I’m paid next month, so for now it’s saved for a rainy day. The money my dad gifted me went towards a new Pandora charm for my bracelet, this charm being the Bobby Bot Dog charm that I’ve been eyeing up for some time now. It’s so damn cute and the online store didn’t do it justice. I love it so much and every time I look at it, I think of my dad. 🙂 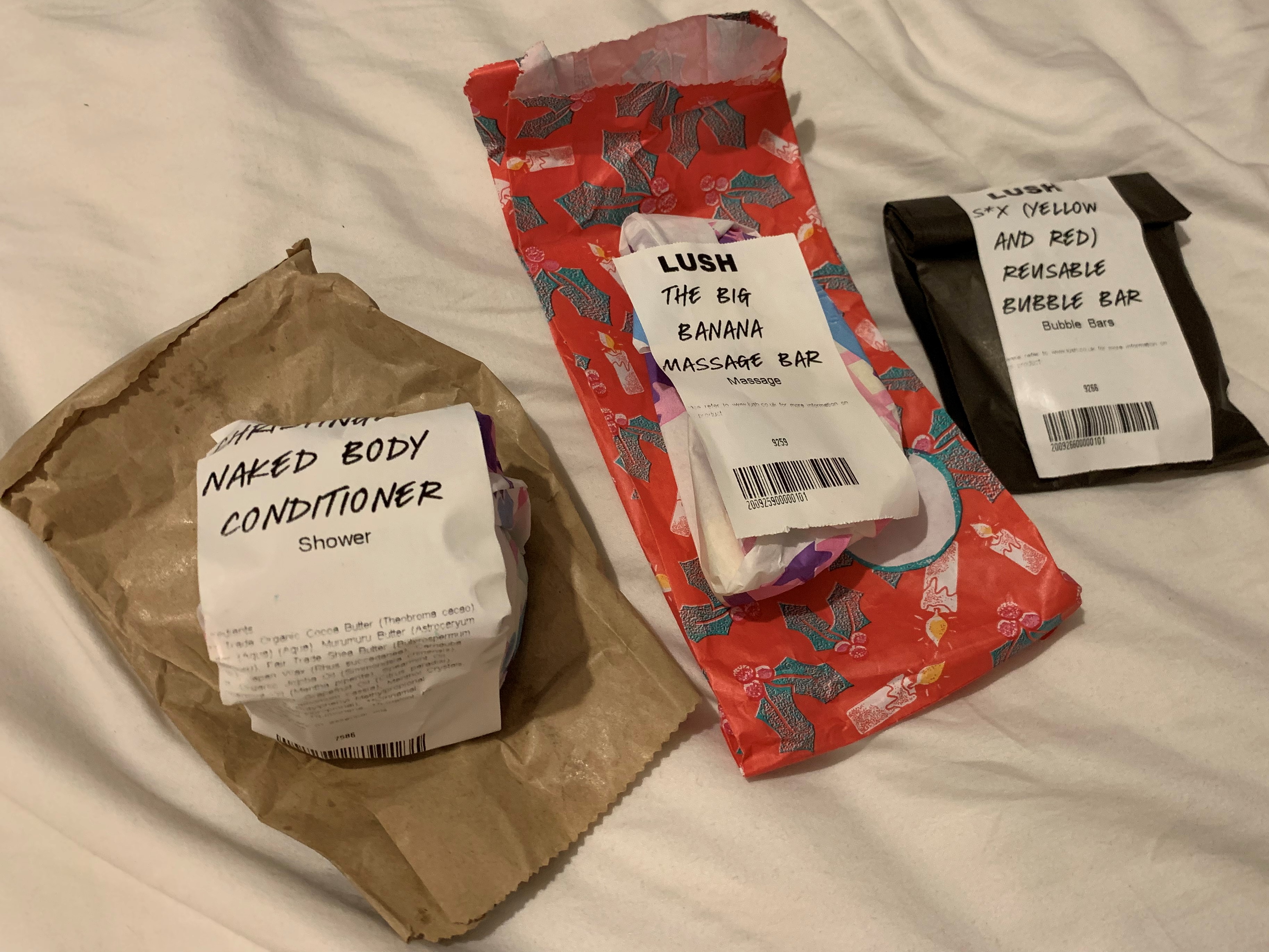 The rest of the money I received went towards some bits and pieces whilst shopping in town on my birthday, including some Lush products which were Christingle Naked Body Conditioner (which was in the sale), The Big Banana Massage Bar (which smells amazing! I don’t quite know what I plan how/where I wish to use this yet. It was tested on Dane and smelt too good to pass up!) and Six Yellow and Red Reusable Bubble Bar (which smells JUST LIKE YOG NOG! One of my favourite Lush scents!).

I plan to try and review Six (Yellow and Red) Reusable Bubble Bar reviewed on my blog before Valentine’s Day, so keep eyes peeled for that. 🙂 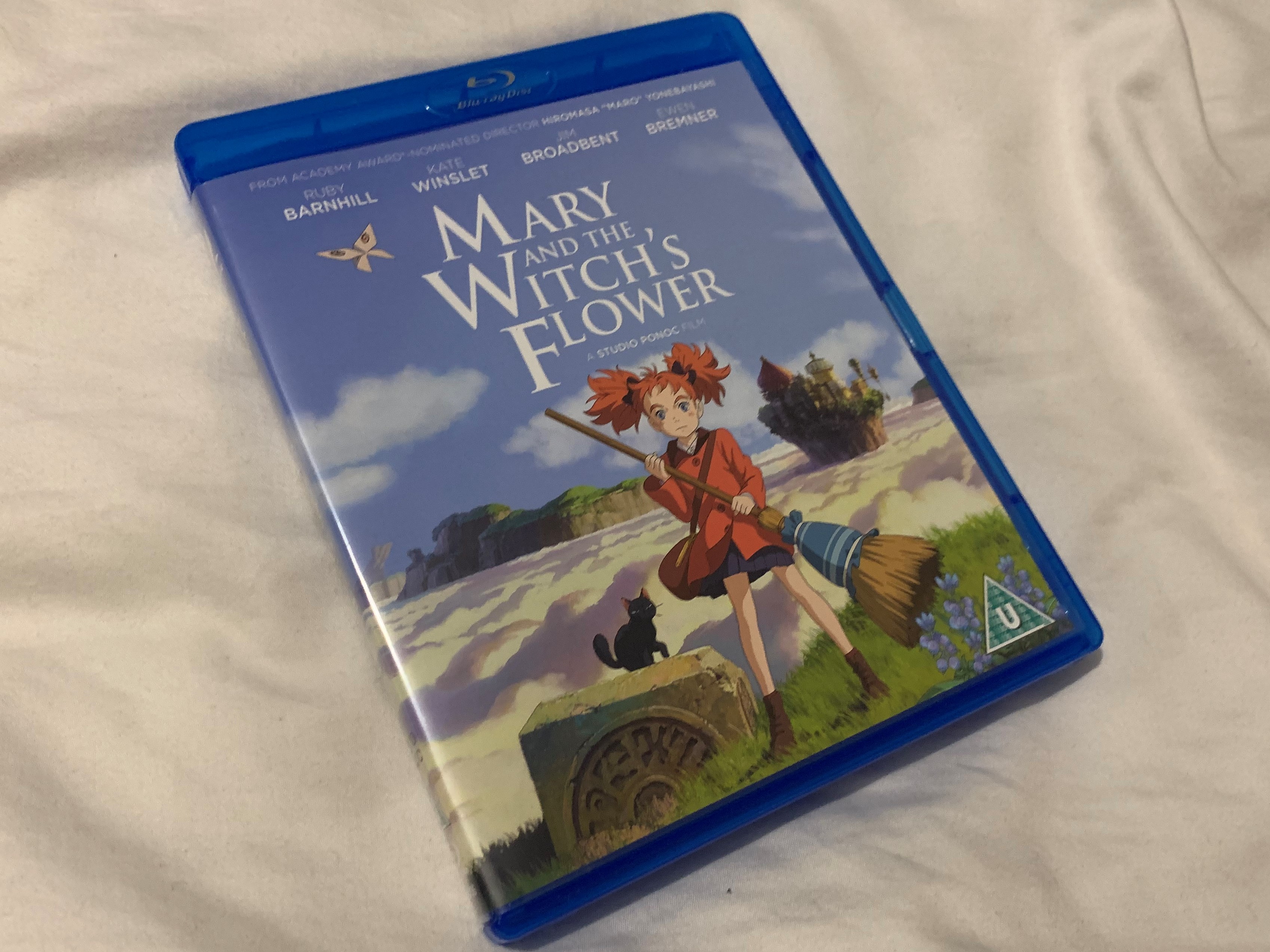 I also picked up the Blu-ray of Mary and the Witch’s Flower as it was only £9.99! I planned to watch it when me and Dane got home from town on my birthday, but we were too tired and just chilled out together in bed and read manga. 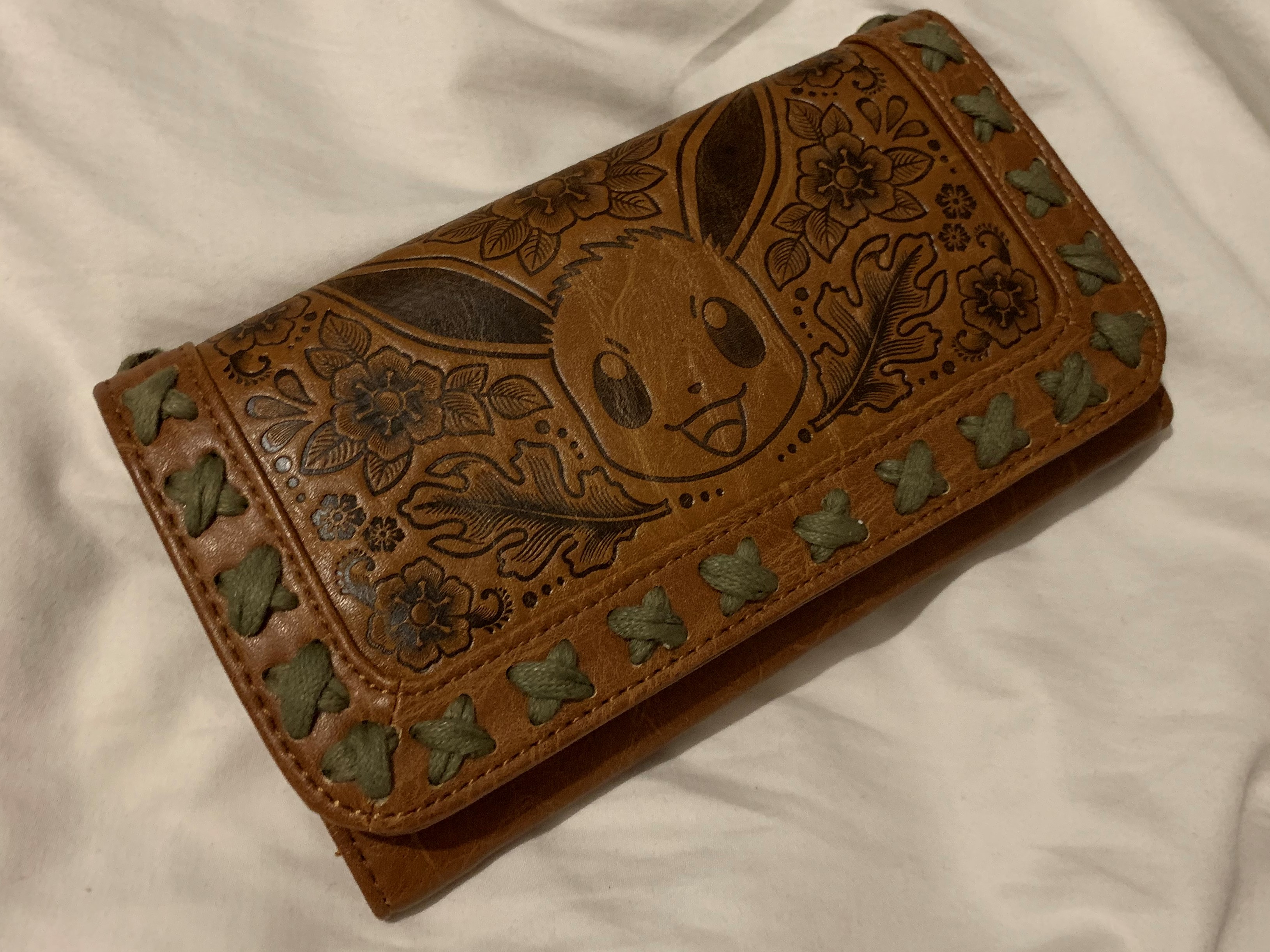 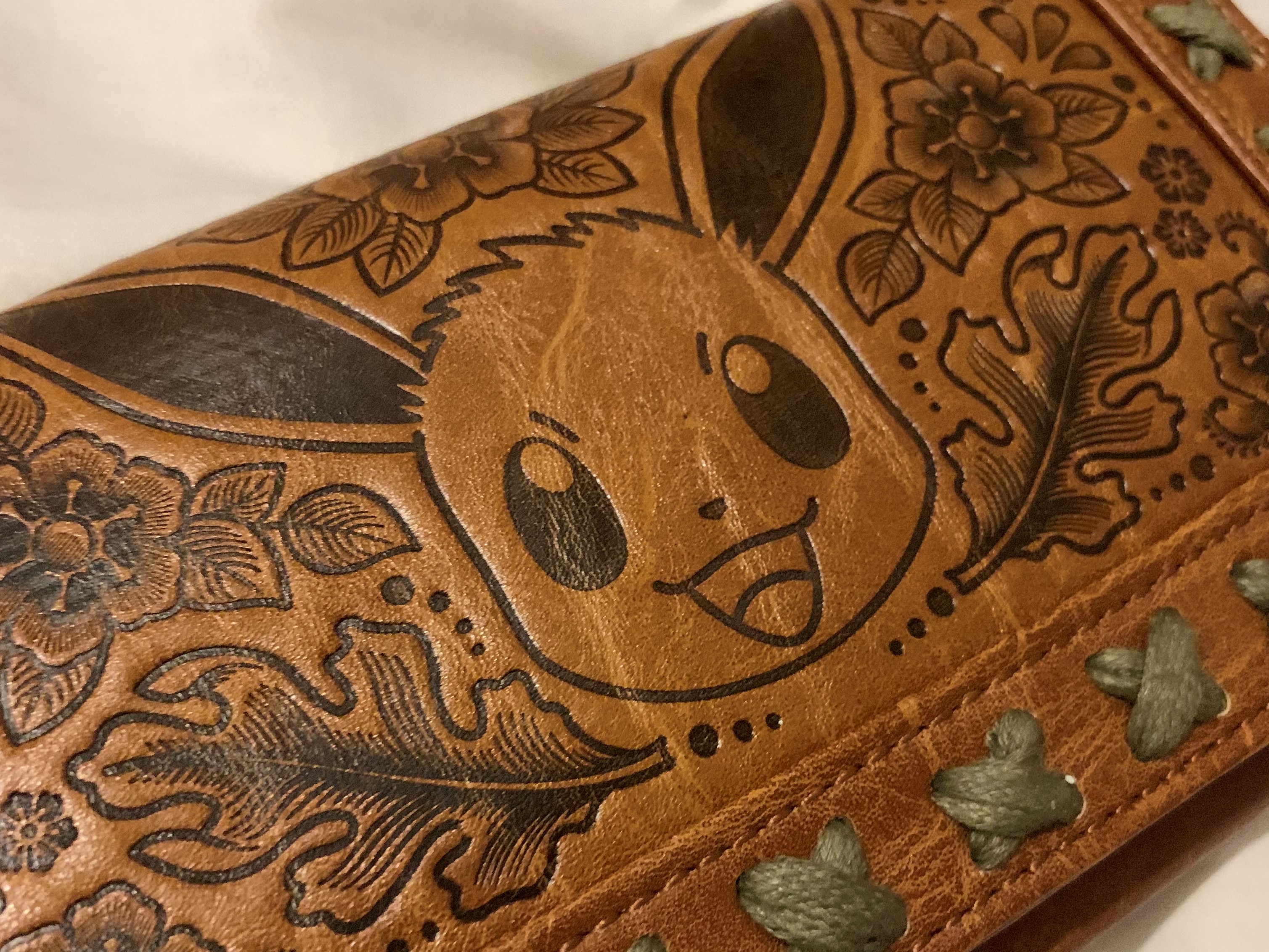 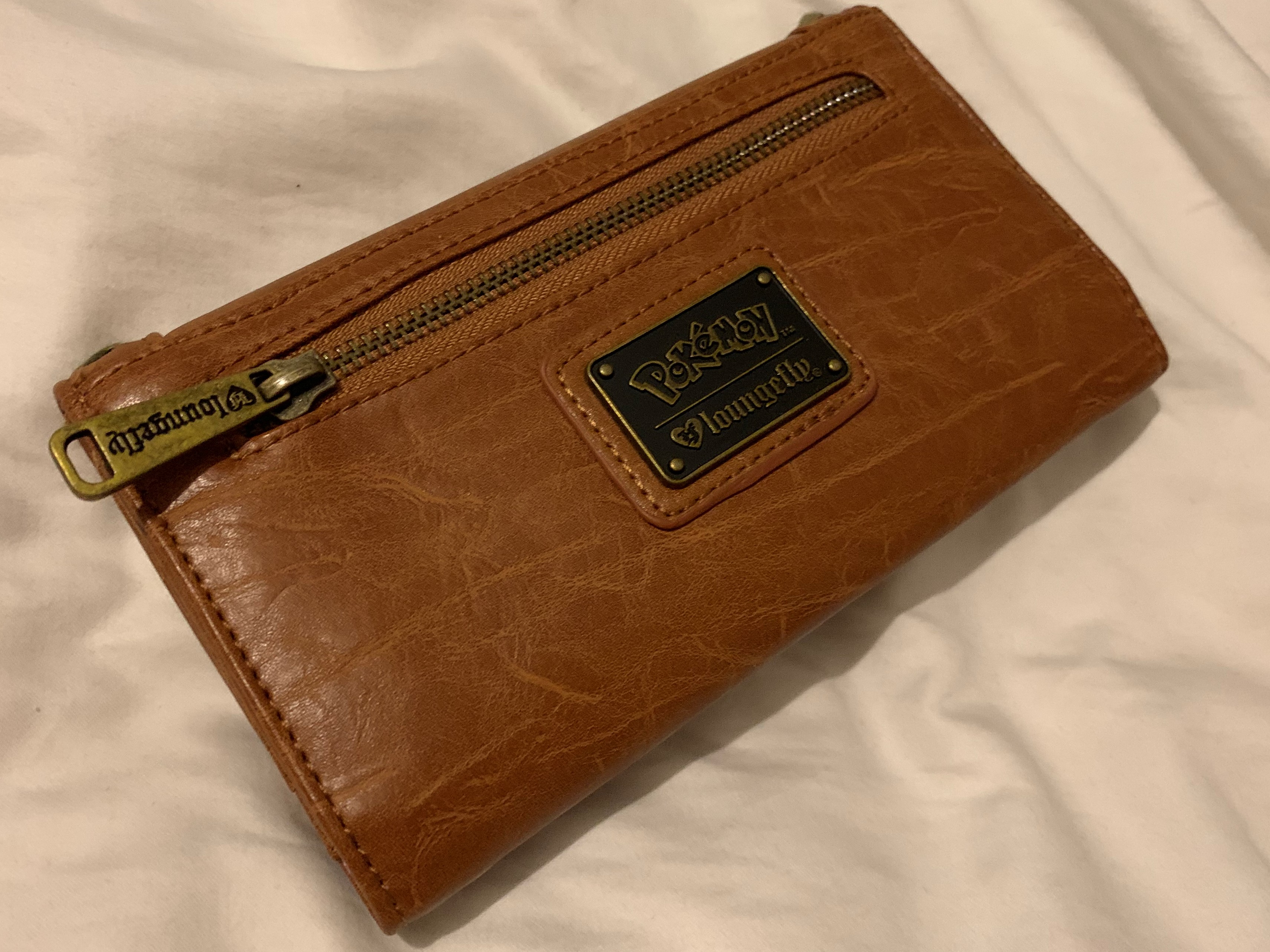 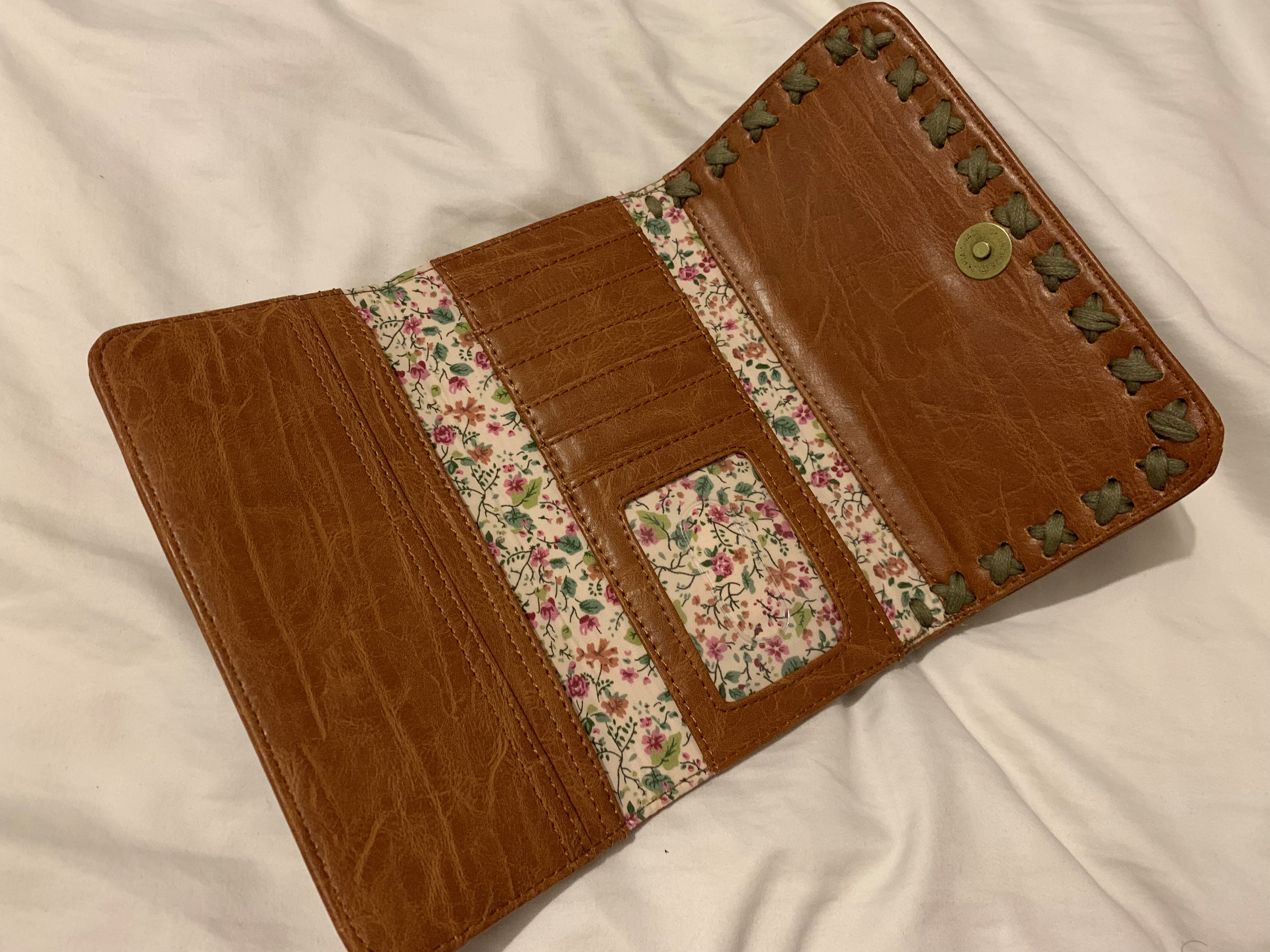 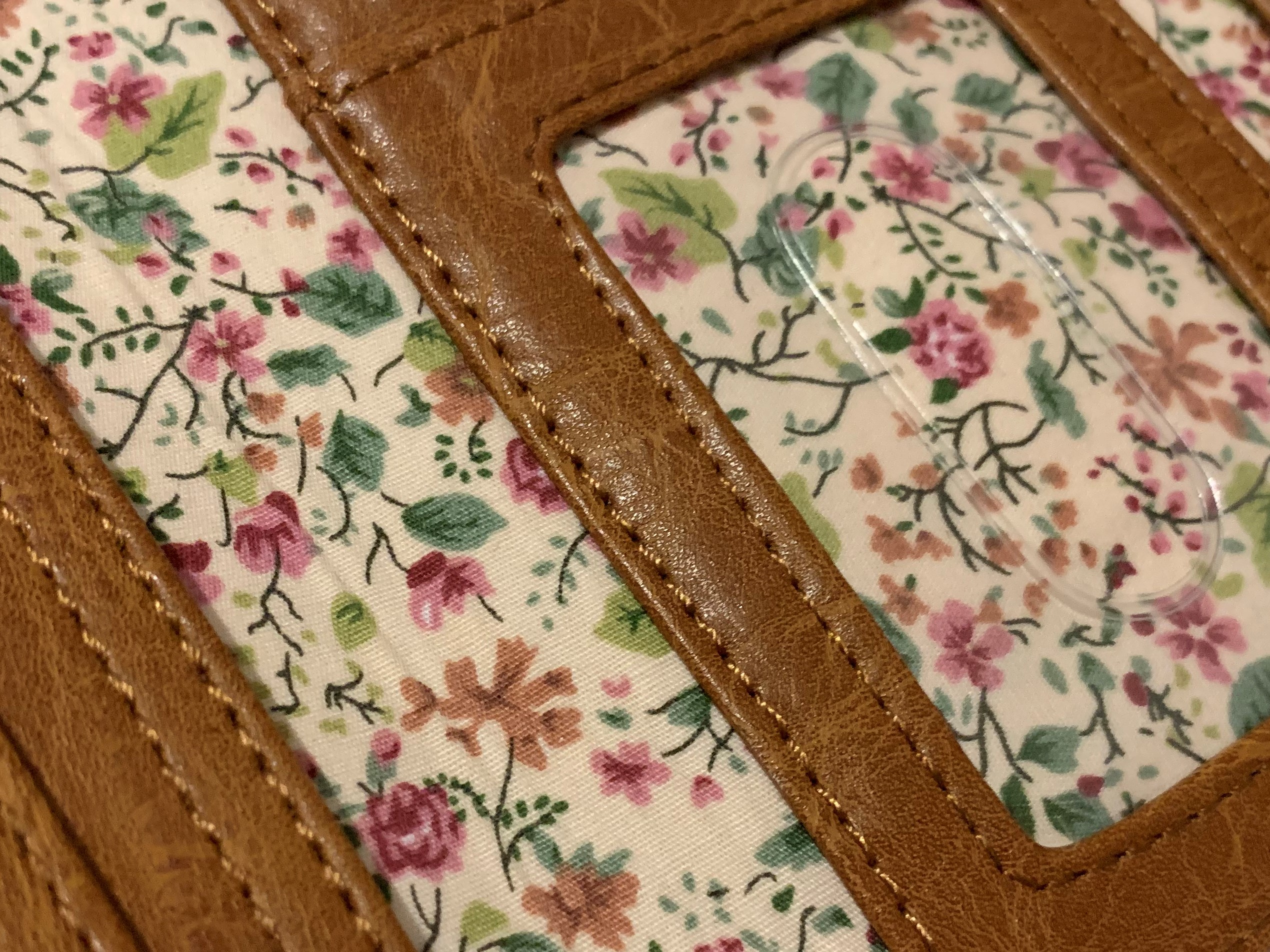 Finally I picked myself a little something up that I’d been eyeing up before Christmas. It’s the Loungefly Pokemon Eevee Embossed Tri-Fold Wallet which I mentioned before Christmas I’d wanted, but had sold out and I was gutted about. I still kept it saved on my Amazon wish list just in case it came back, WHICH IT DID! I was so happy and as soon as I saw it was back up for sale, I made sure to order it. I didn’t want to miss out on it again and for it to be permanent the next time. It arrived a few days later and it’s gorgeous and even better than I thought it was going to be! It’s a lovely vintage brown colour with a picture of a happy Eevee on the front. When you open it up there’s a gorgeous floral pattern inside of the wallet.

This is the same style as my current wallet (which is also by Loungefly) so I can transfer loads of stuff into it easily from my old wallet, which I’ll do as soon as this post is written, as I can’t wait to use it later today! 😛

So, that was everything I received and even bought for myself. 😛 I loved my birthday this year, even if it did go far too quickly for my liking. I went to town for the afternoon with Dane, went to Ghetto Golf with Dane and friends and went for a meal with Dane after. It wasn’t anything special, but it was good nonetheless.

I don’t quite know what to ask at the end of this post other than, when is your birthday? 😀 Make sure to let me know!

I hope everyone is ready for the weekend, I know I am! 😛

Until next time all, have a lovely weekend!