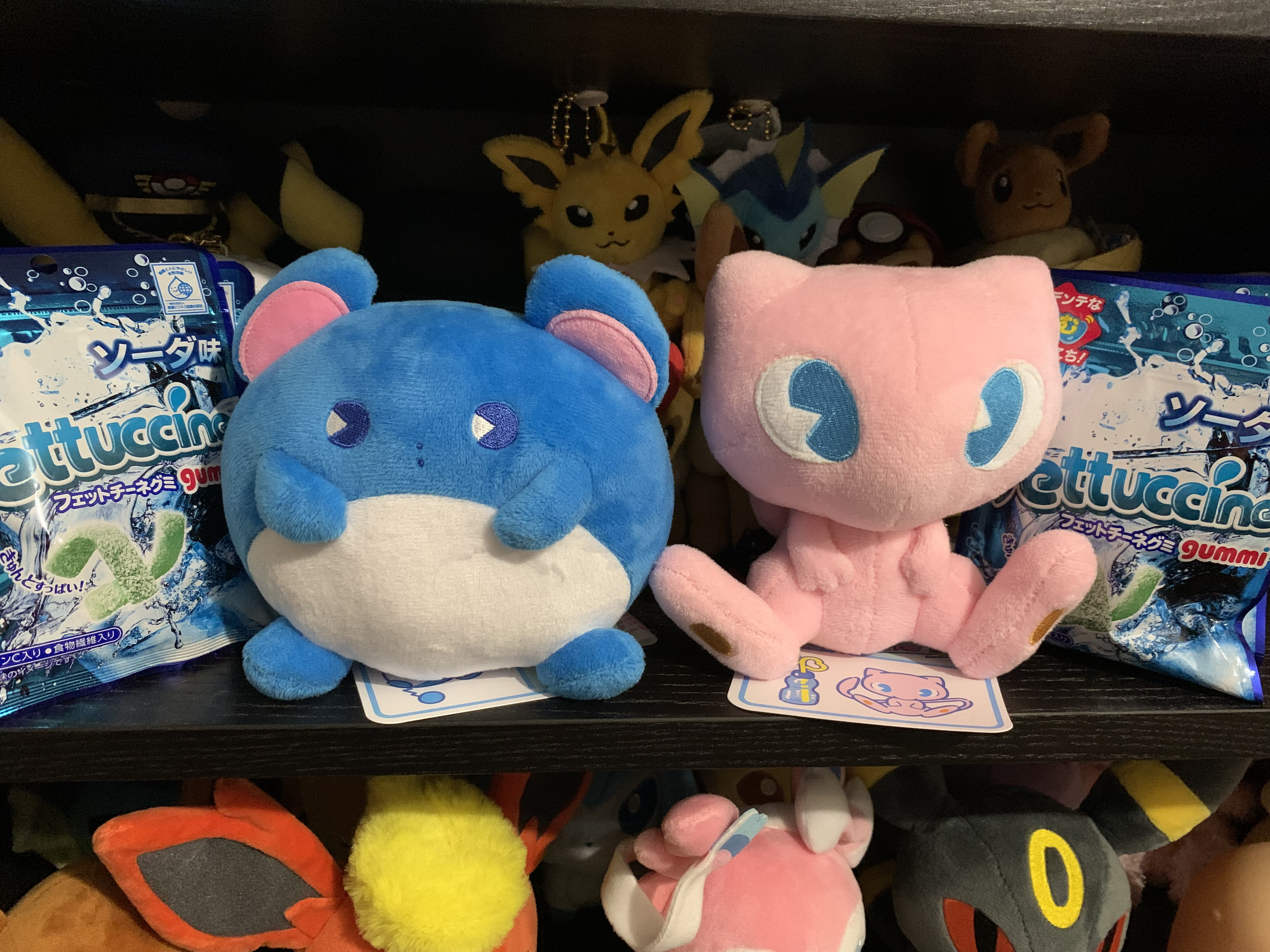 Guys I cannot tell you how excited I have been to write this review and haul! I have literally had the items I’m going to be talking about with you sat in the box they arrived in in anticipation! 😛

In 2021 I decided that I wanted to explore my options when it comes down to buying kawaii goodies from Japan, such as the Pokemon center, Nintendo Tokyo, Nendoroid figures and more. I’d heard about Meccha Japan for quite some time, but never really thought about buying from them before as I always get anxious when shopping with new places based in Japan. I decided to go for it though last month and ordered myself some Pokemon plushies, as well as some of my favourite Japanese candy. All items are soda themed by the way, which I thinks pretty cool. 😛

I wanted to write a review all about Meccha Japan, as when I searched online for reviews via blogs and YouTube, I couldn’t find anything! No one I knew at the time of making my purchase had ordered from Meccha Japan either, but as they had great Trustpilot reviews and you could pay via PayPal (always important for me!) I decided to go for it. Spoilers, my experience was pretty good. 😛

So, sit back and grab a hot drink and maybe one of your favourite plushies to cuddle as I share with you my thoughts on Meccha Japan, as well as the soda themed goodies I bought.

For those of you who may be asking who Meccha Japan are a Japanese online shop who sell exclusive items that only come from Japan, which range from Pokemon, Sanrio, Studio Ghibli, Nendoroid figures and even Japanese food! All items are ready and available on the website, so now requesting items or trying to purchase through third parties.

I discovered Meccha Japan in 2020 when I came home from Japan and was after some items from the Pokemon Mofu Mofu Eievui collection. I found Meccha Japan through Google searches and had them bookmarked since. 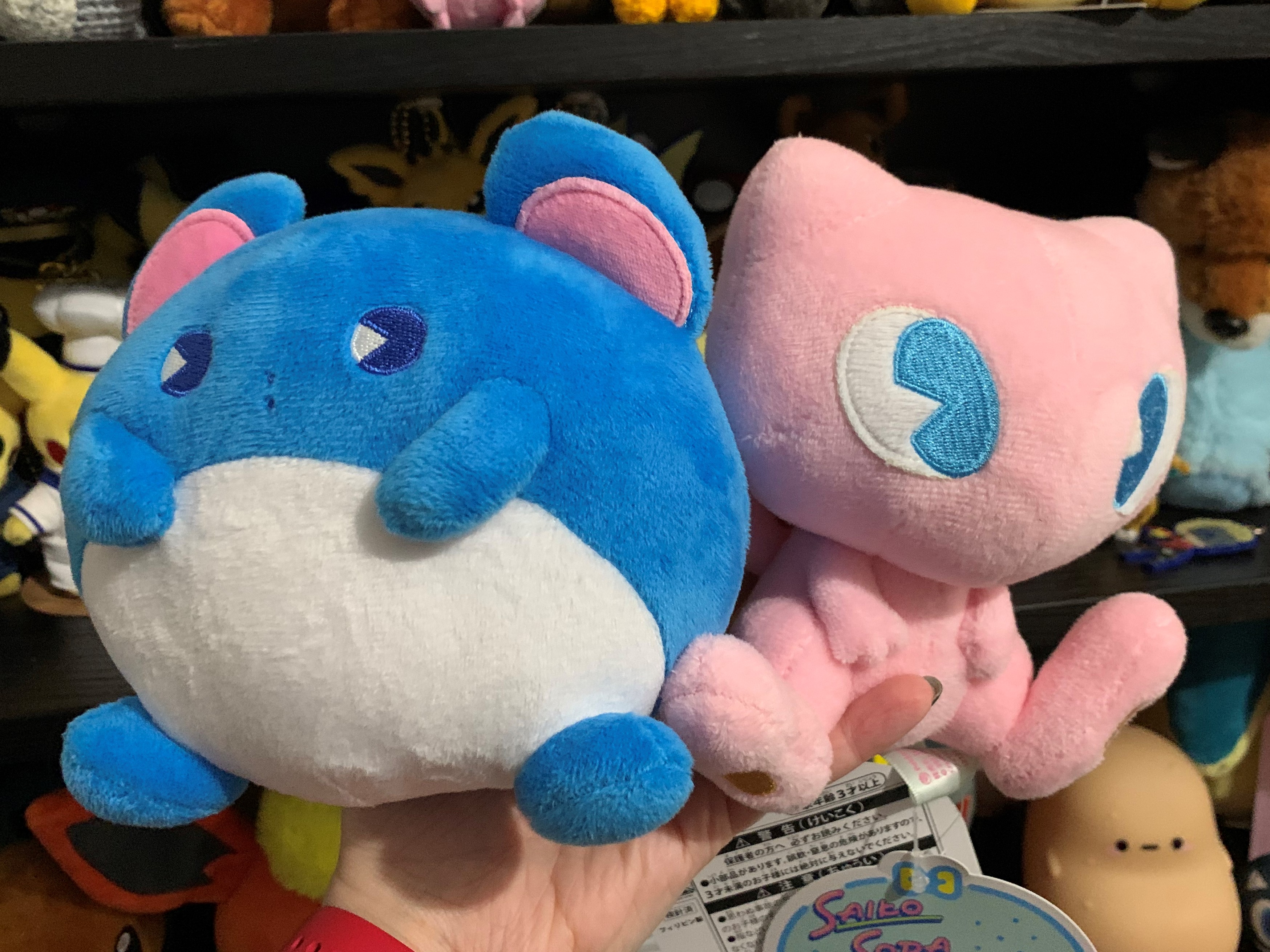 Recently the Pokemon Center in Japan announced they would be adding more plushies to their Saiko Soda Refresh line, including Psyduck, Mew, Marill and Chikorita. I fell in love with the Mew plush especially but Marill’s cute little face definitely caught my eye too! I couldn’t decide between which to order, so I really went for it and ordered both, calling it an early Christmas present to myself. 😛 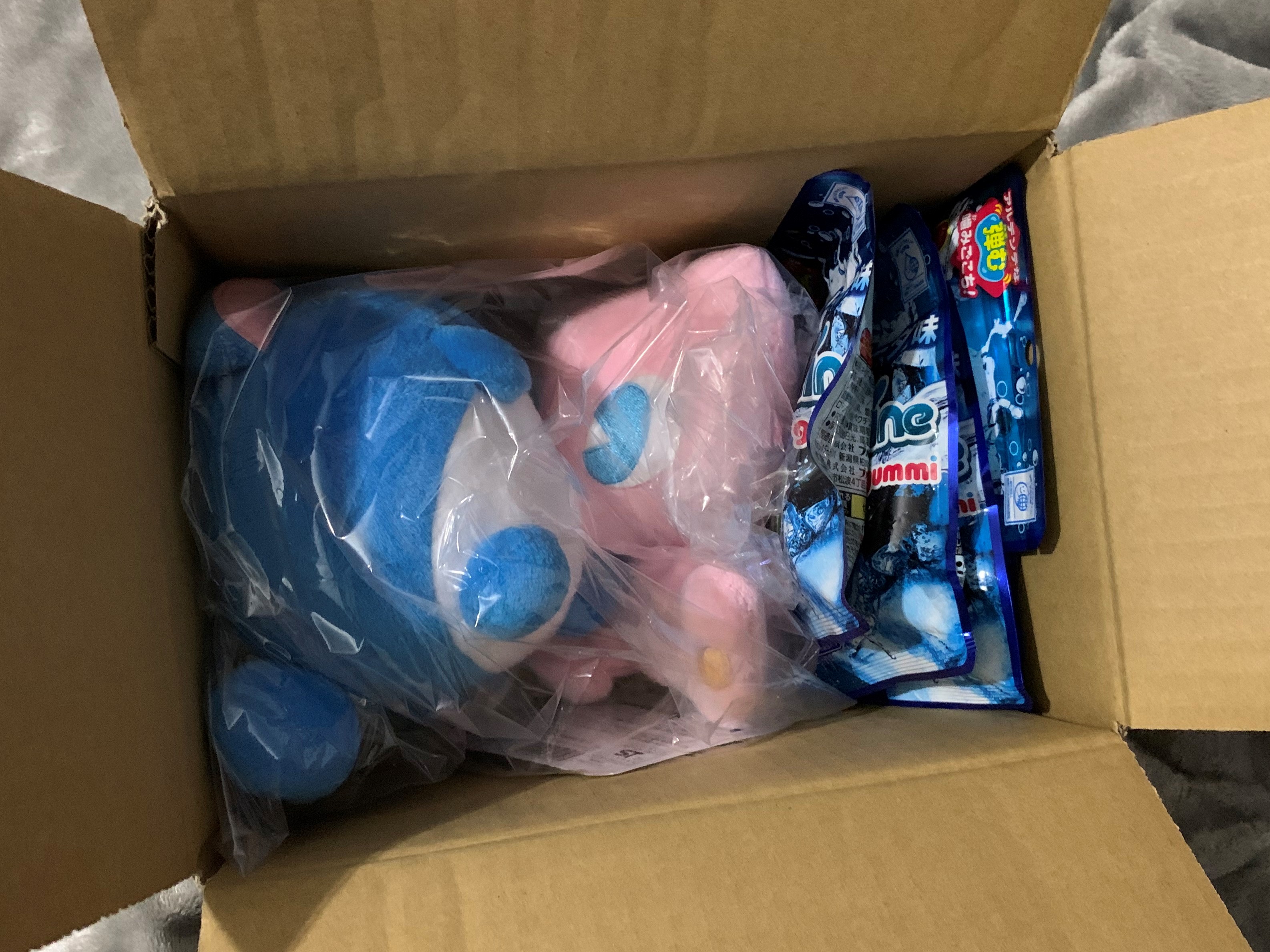 One thing I wanted to mention and show here is how well packaged I found everything to be! The box wasn’t too big for the goodies I ordered, as well as a fair cost for airmail, which arrived a week after it being sent. The cost for all my goods to be shipped was £11.54 which I found really good considering. A lot of people may feel this is a lot, but considering it arrives in a week, I’m not complaining! 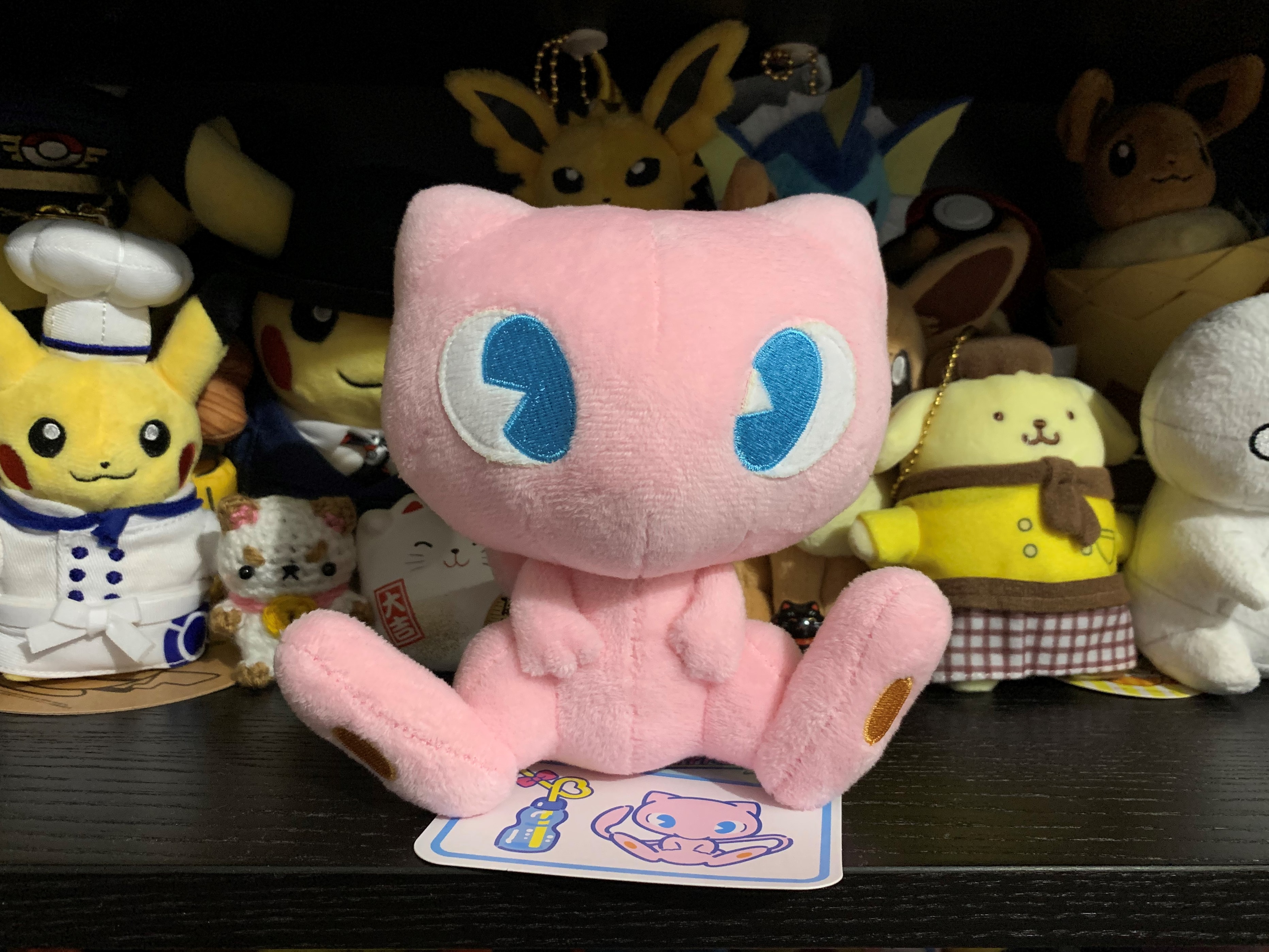 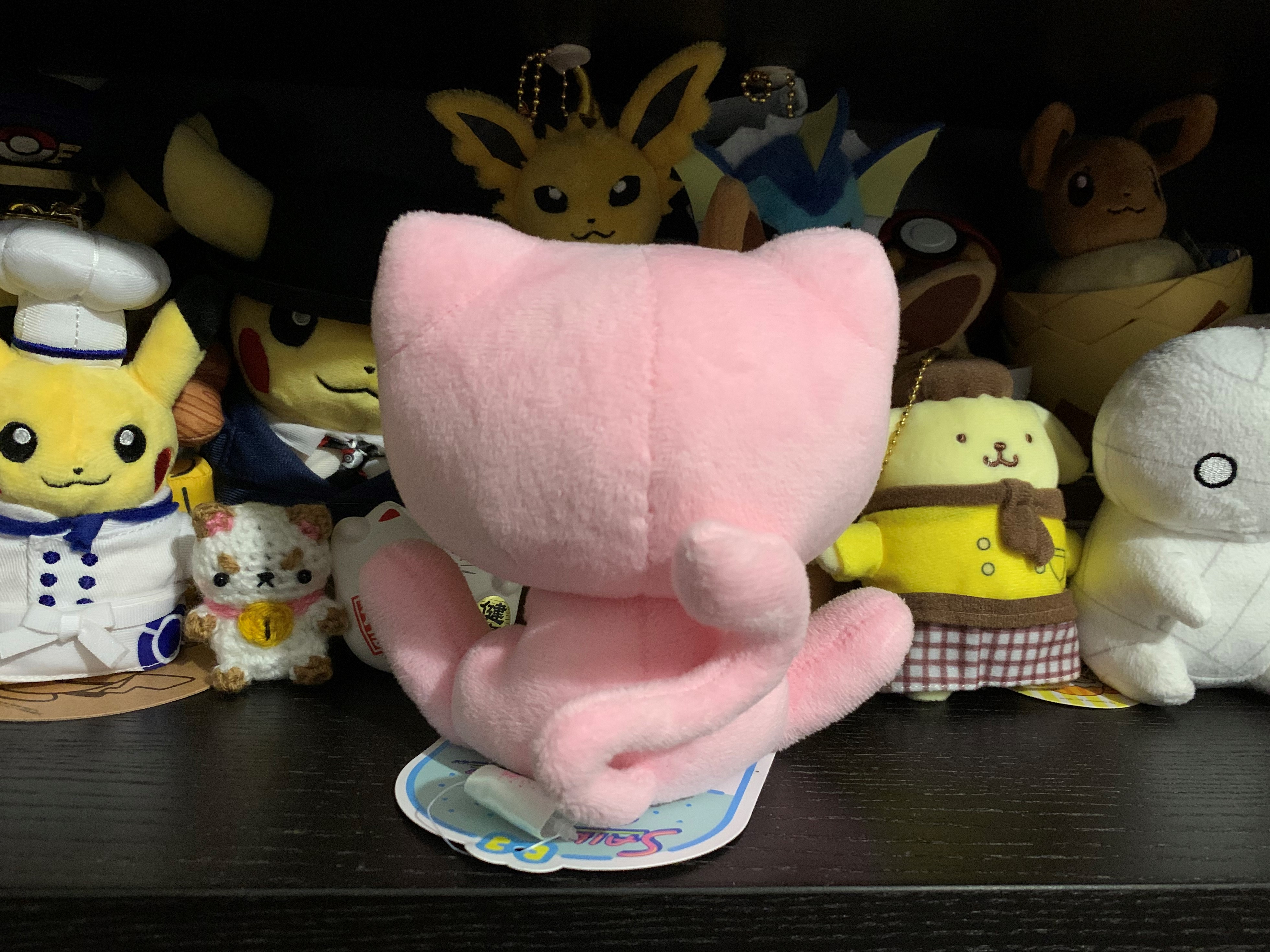 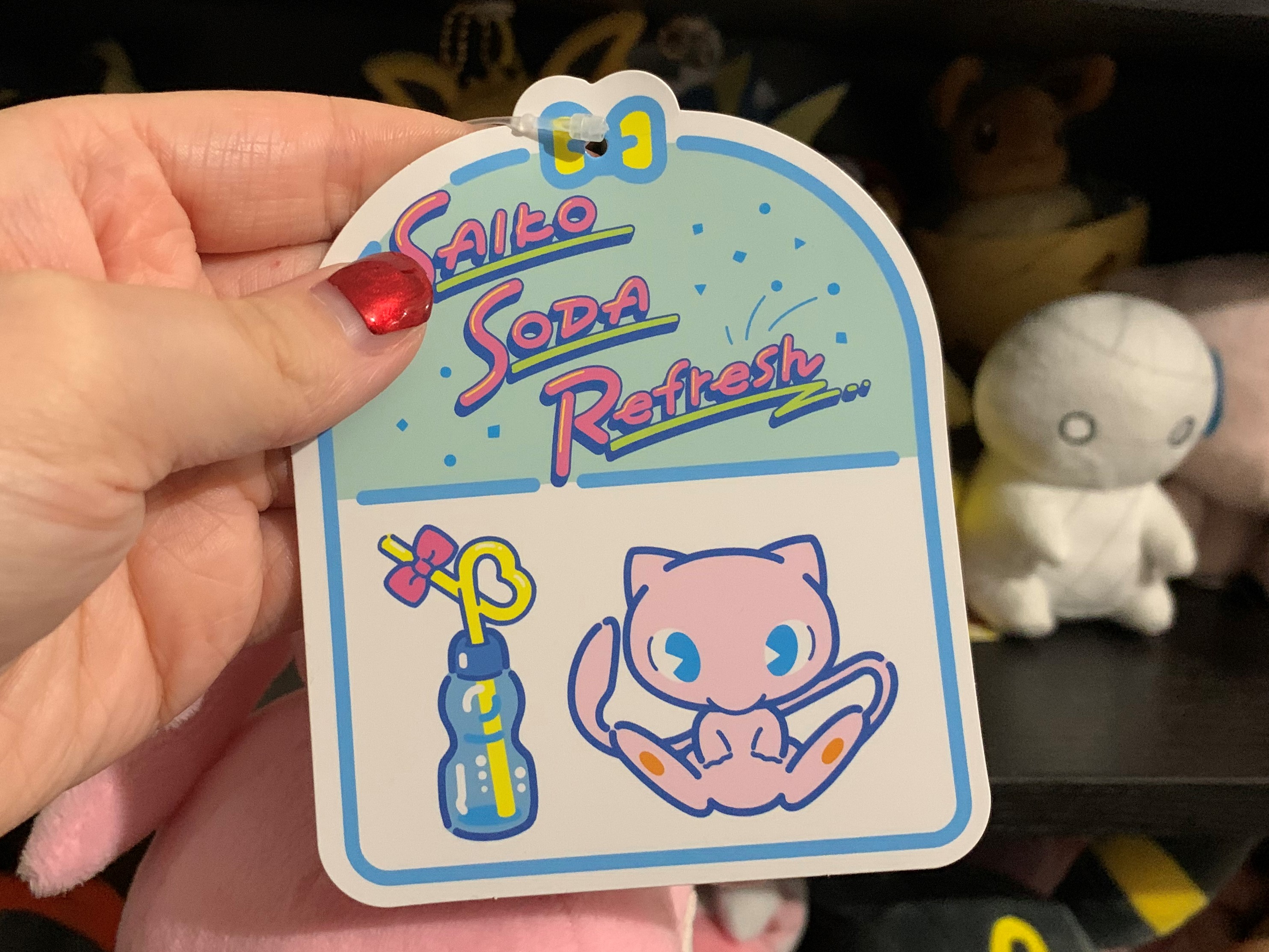 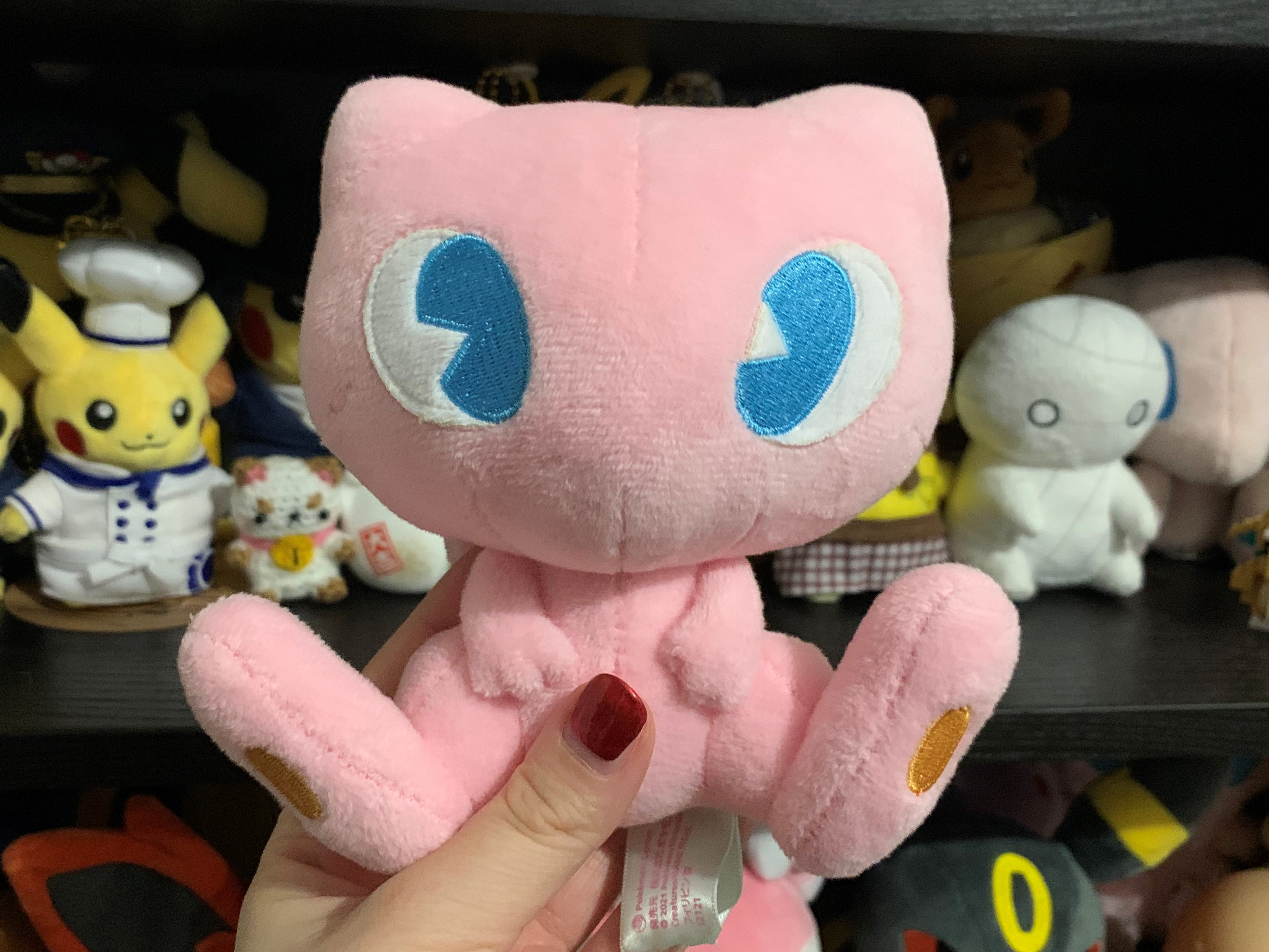 The Mew plush is a gorgeous Barbie pink colour, with huge cobalt blue eyes and the CUTEST tag design I’ve seen since the Eeveelution Poke Dolls. This is a really nice sized plush for a collector, especially if you love Mew and the colour pink as well. At the time of purchase this cost me £11.32, which is a complete bargain! I couldn’t not pick up Mew, considering it’s one of my favourite Pokemon. I’ve really loved the Saiko Soda Refresh collection, but just never really “loved” anything from the collection enough to buy, until now. This Mew plush was my reason for finally taking the plunge for making my first order with Meccha Japan. 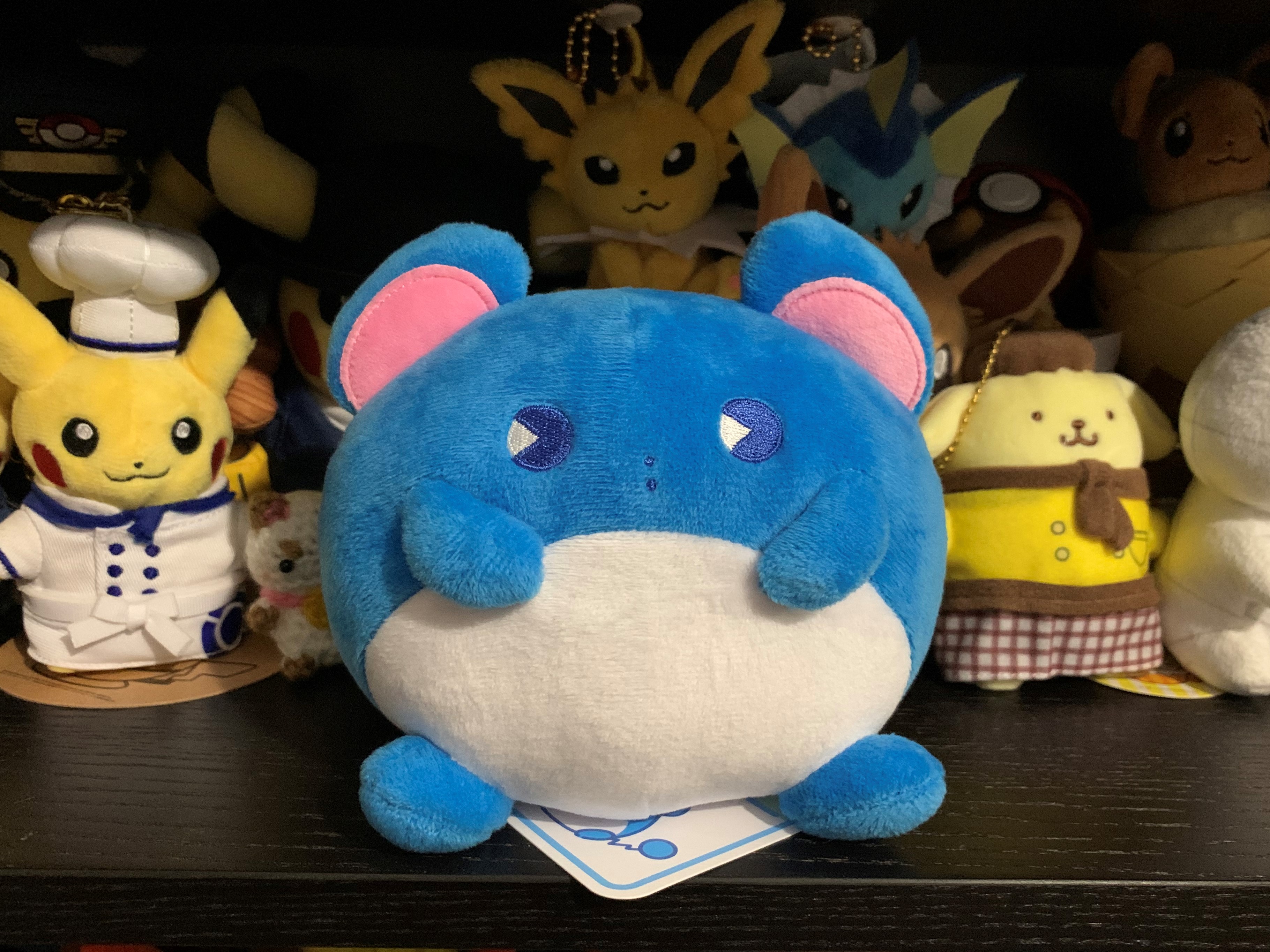 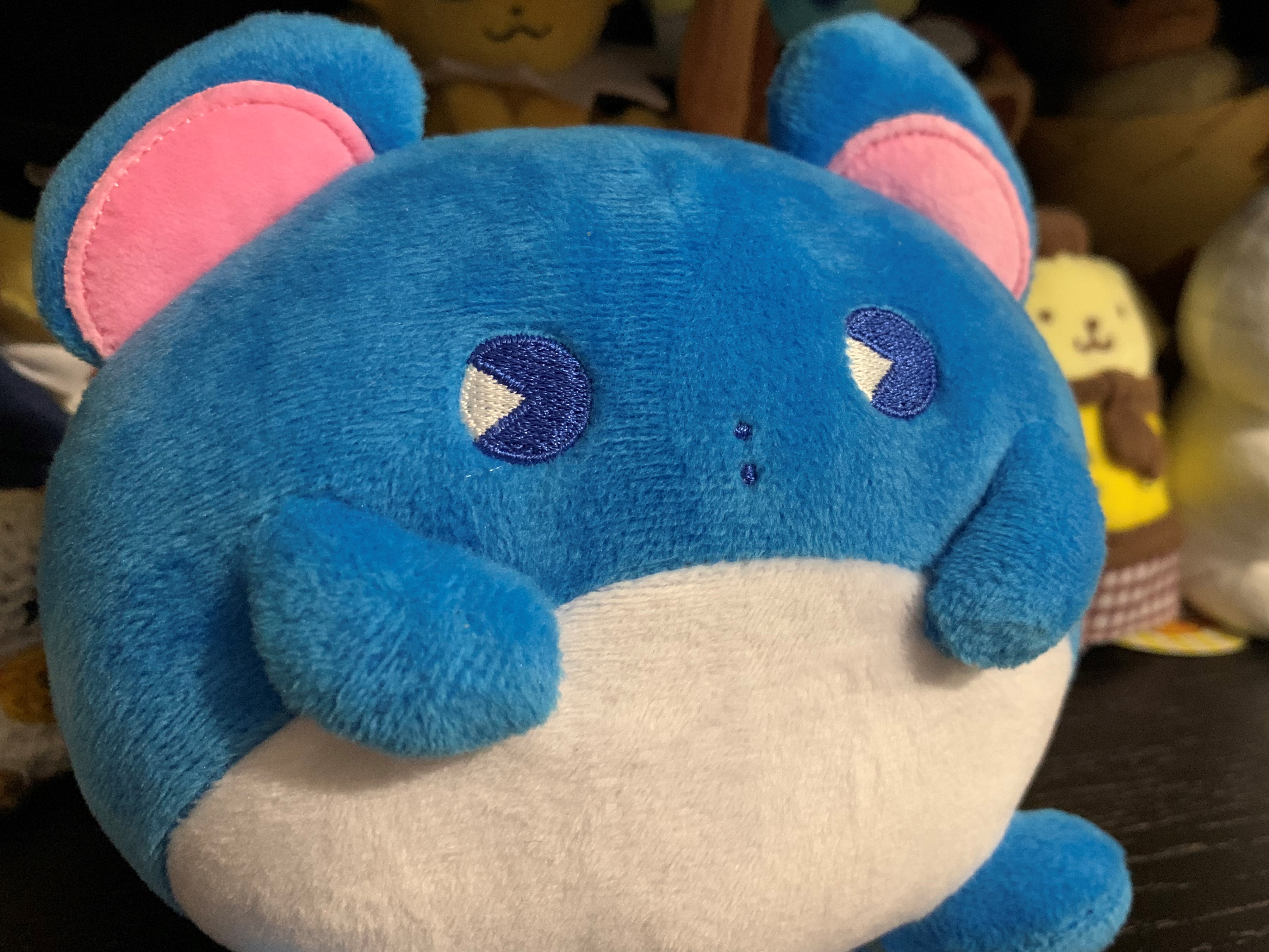 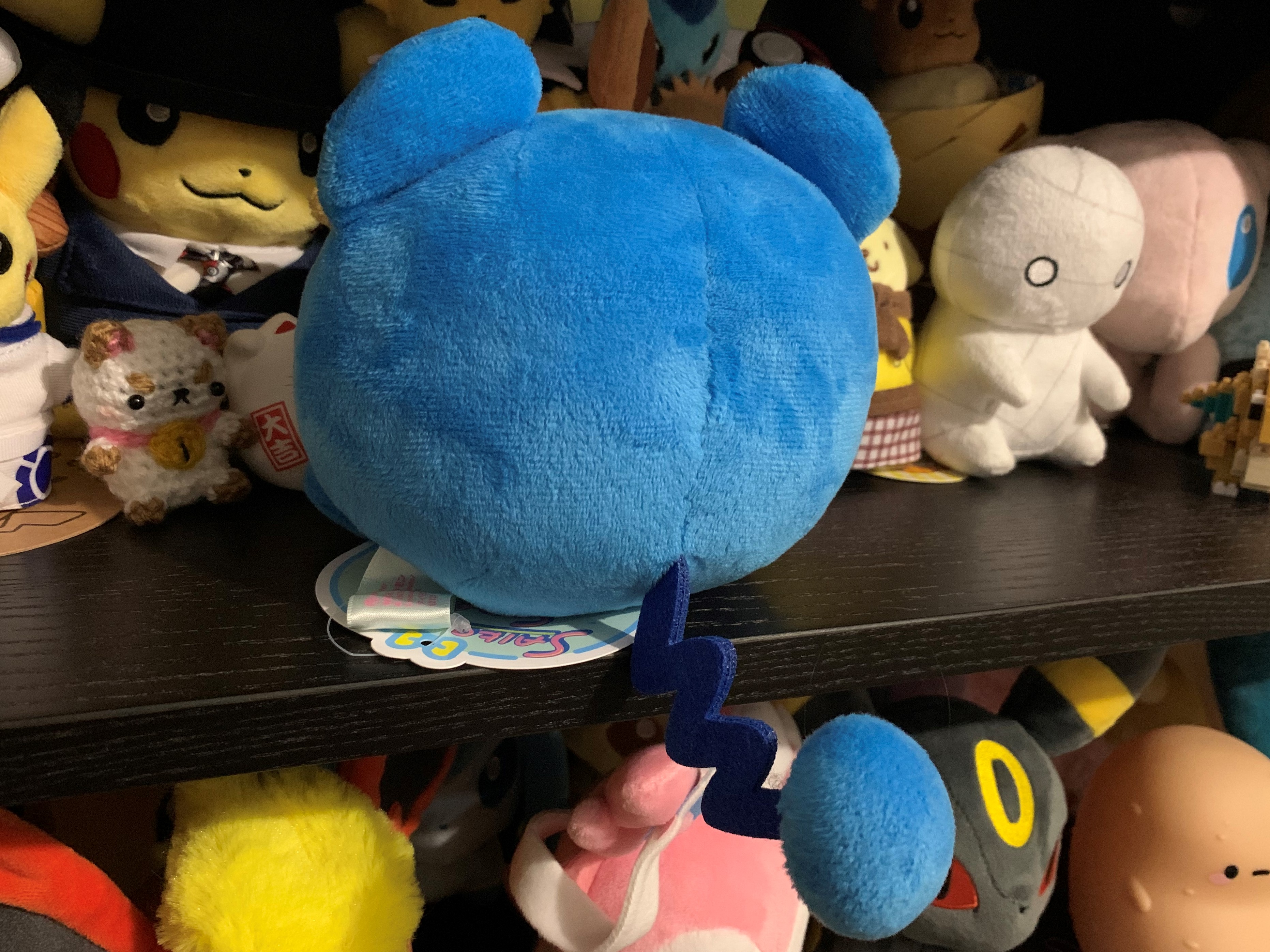 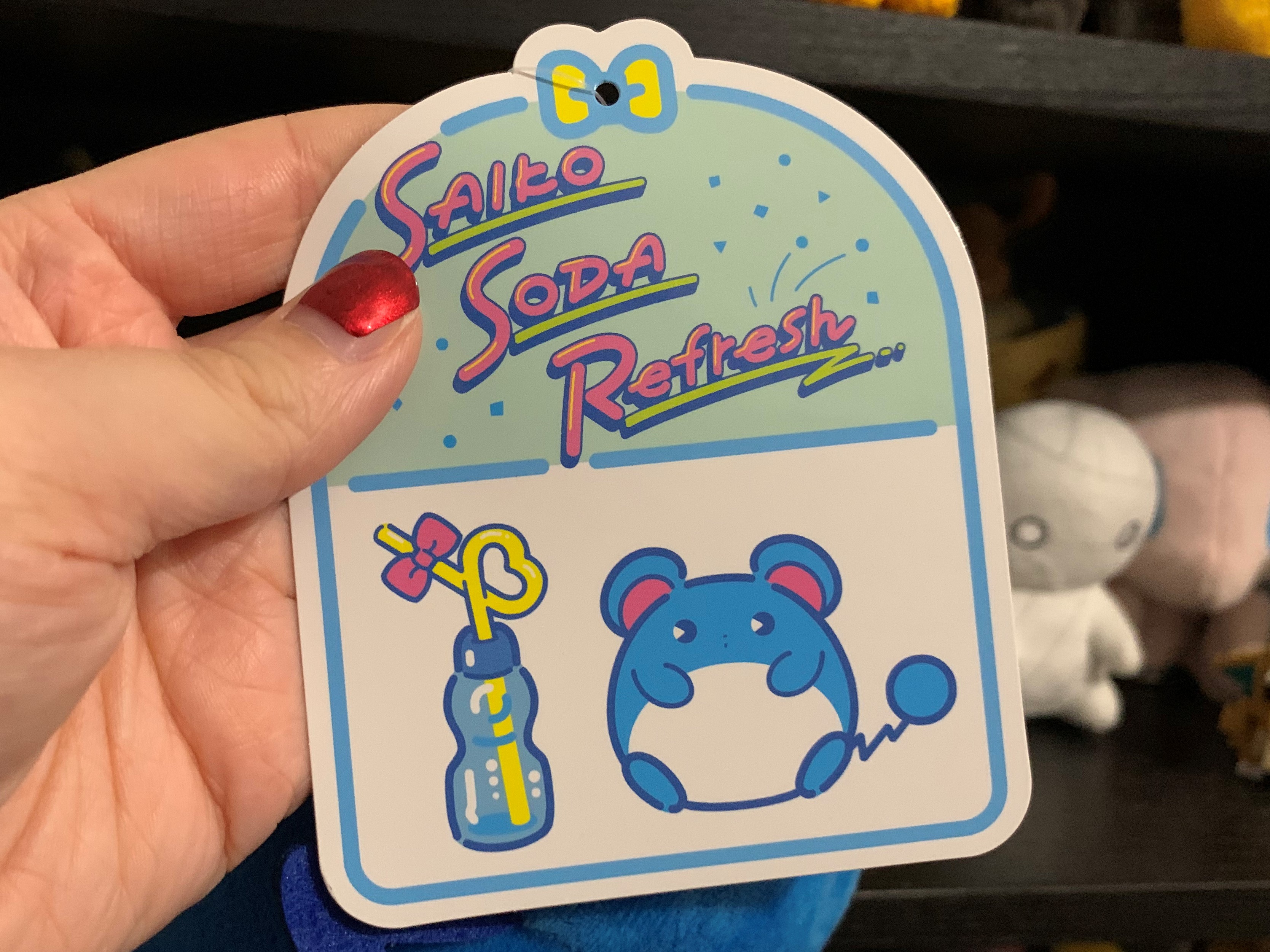 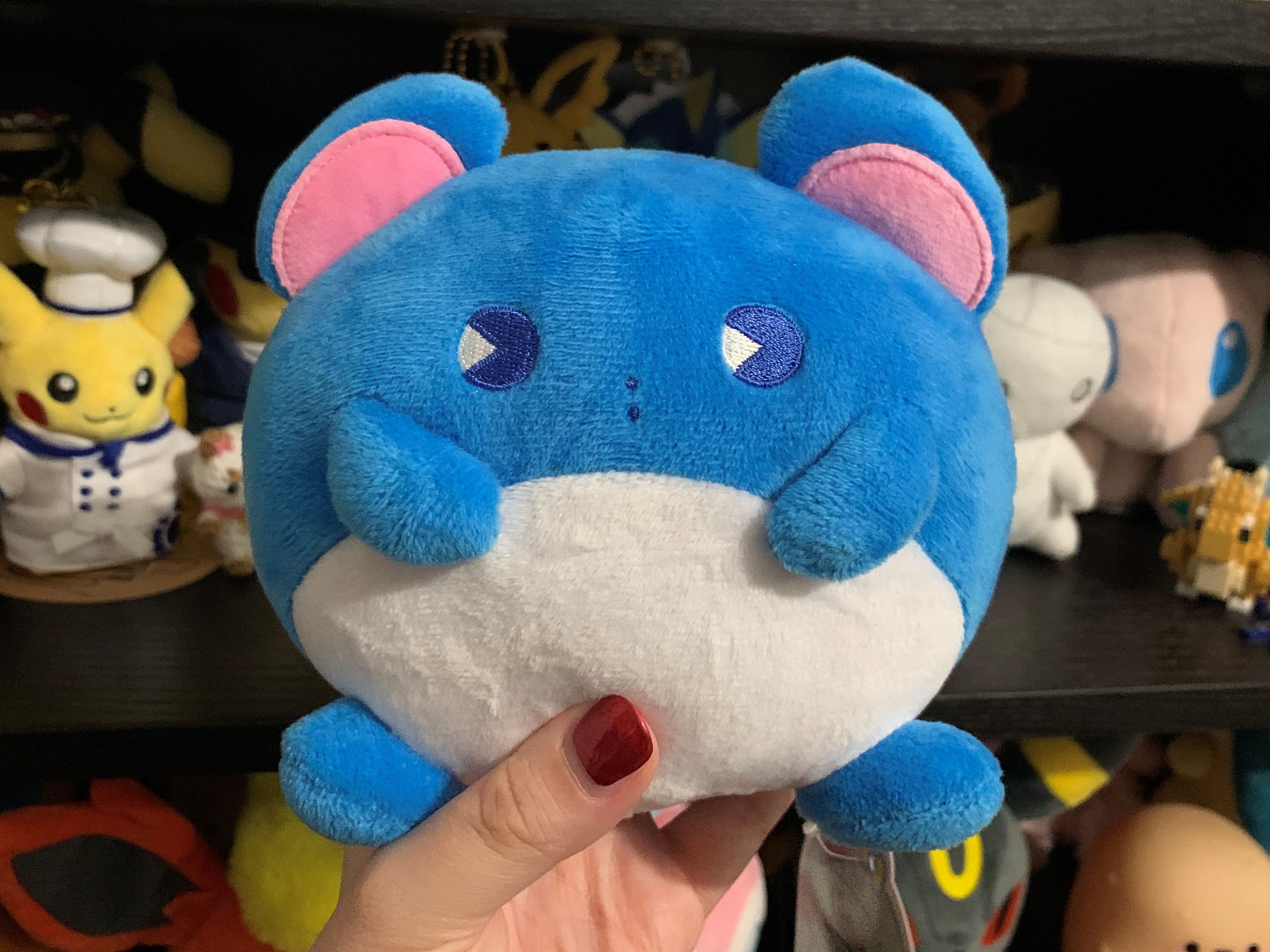 This is the first (and probably only) Marill plush to come to my Pokemon plushie collection and it’s so BLOODY CUTE! Literally, “It’s so fluffy I’m going to die!” feelings came when this arrived! I ummed and ahhed a little bit about buying this plush, but due to the price at the time (same as Mew at £11.32) I thought it would be rude not to buy it and I’m so glad I did, as since then the price has increased. I only assume this is due to these plushies selling out and being harder to get? I especially love it’s confused and surprised looking face, which is so cute! Everything about the Marill Saiko Soda Refresh plush works and I don’t think they could have picked a better Pokemon for it. I especially love Marill’s tail too, which is really springy and cute, definitely something different for my collection. Like Mew, the artwork on the tag is so adorable! 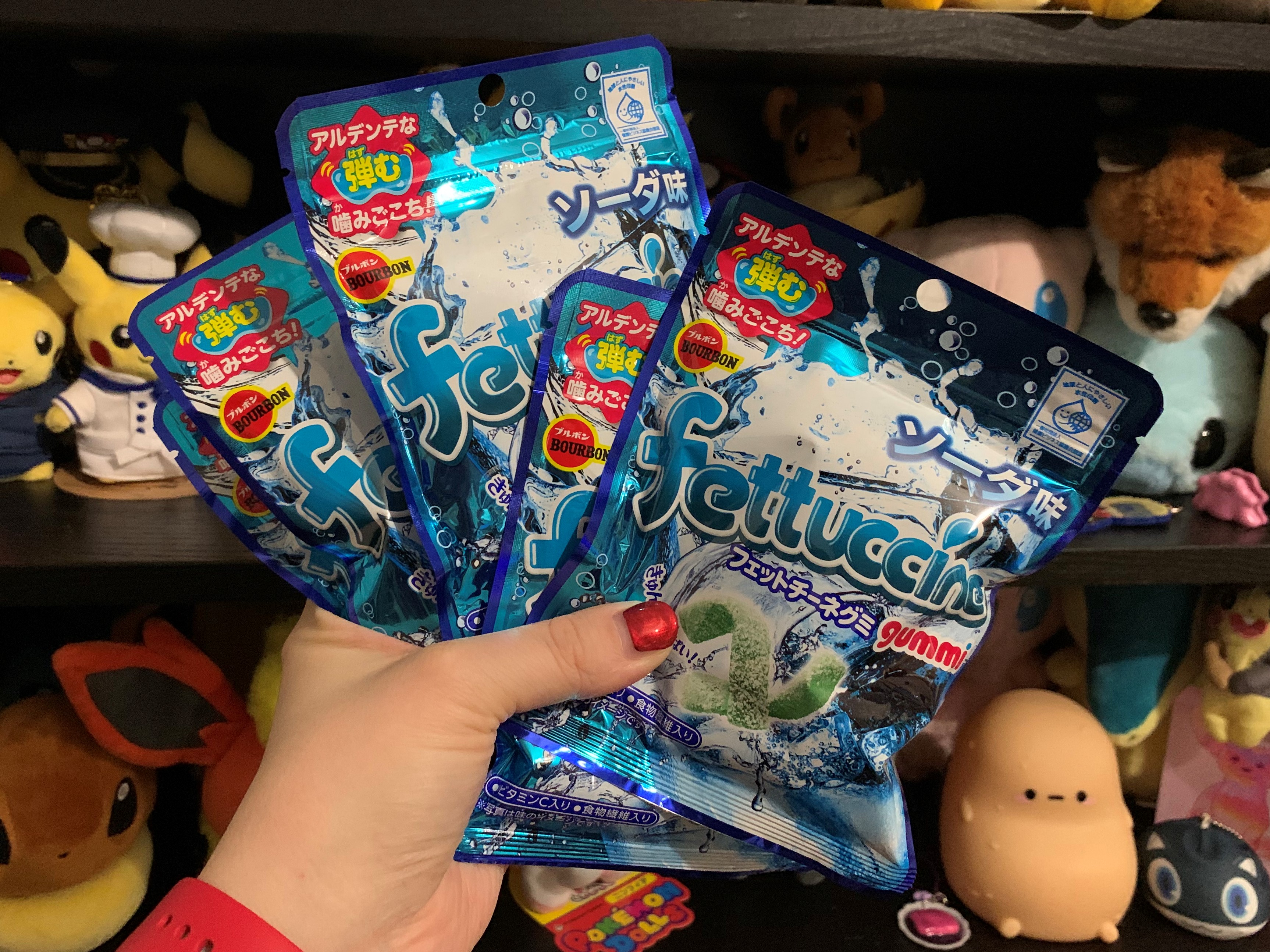 Alongside the Pokemon plushies, I also ordered myself some of my favourite Japanese candy, Bourbon Fettuccine Gummies in soda flavour! 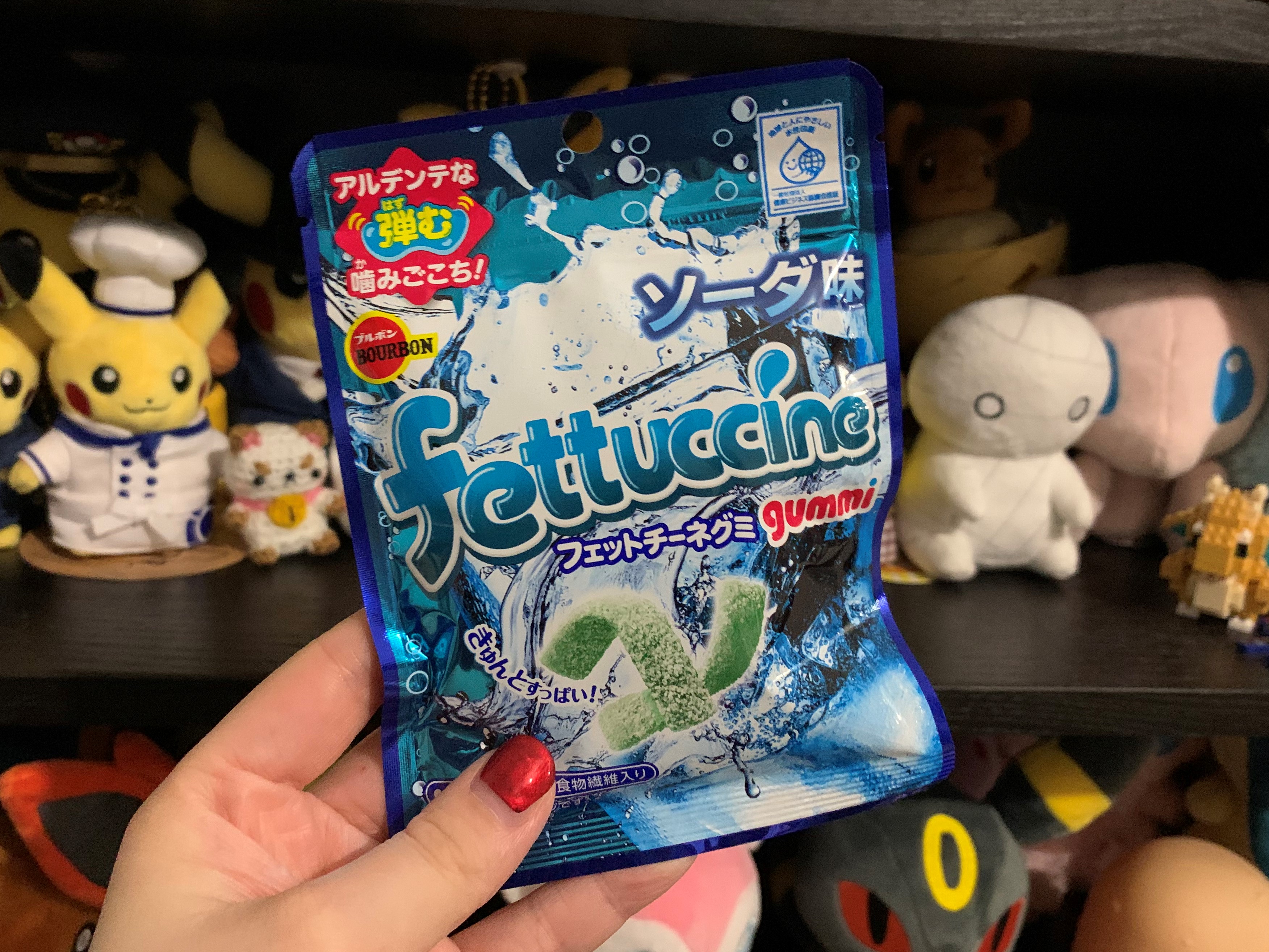 I discovered these ramune flavoured sweets in Japan in 2020 and fell in love, so when I found these on Meccha Japan, I made sure to order a decent amount… Aka five packets. I had ten in my basket originally, not going to lie. 😛 These are chewy strips that are a aqua blue colour with a sugar coating and taste of ramune, my favourite! These are stupidly cheap at just 96p a packet (at the time of ordering)! Some stockists in the UK are selling these over £3.00 which is a joke. I’ll definitely order some more of these on my next order from Meccha Japan, it would be rude not to.

Overall I was really happy with the service from Meccha Japan! Their costs are extremely fair, the delivery costs were too and overall I was just happy with how everything arrived too.

I’m already planning to order from them again in the near future and have some goodies bookmarked for next time, including, Pokemon Mew Cookie Roll Tin and Pokemon Fit Phanpy Plush.

Have you ever purchased from Meccha Japan? If so, how was your experience and what did you buy? Make sure to let me know in the comments!

Until next time all, have a great weekend and see you next week. 🙂

One thought on “Meccha Japan – Review and Haul”