First of all apologies for the silence from me for two weeks! As I mentioned in my last blog post (October Favourites ’22) both me and Dane were due to have some time off work together, and we pretty much chilled all the week, and went for a chilled holiday the weekend. It was a much deserved and needed break for us both and we were sort of gutted to be back at work.

We just spent a lot of time together, which was also very overdue. We live together, so we are always just a room away from each others company, but sometimes we might be doing our own thing, whether that be online with friends, or solo. I’ve been spending a lot of time on my cross stitch projects lately, whereas Dane has been playing a lot of games, so it was nice to come together to do things we both love… Which was playing games. 😛 Then over the weekend we went to North Wales to stay at a shepherds hut, have a go at clay throwing, and of course explore some parts of the area. I’m going to talk more about our trip soon, so keep eyes peeled for it at the end of the month on my November favourites. 😉

I’ve realised whilst putting this wish list together that not only is it very clothing and plushie heavy, but it’s also very Pokemon heavy as well! Not that there’s anything wrong with any of those things, but if you aren’t a massive Pokemon fan… This months favourites may not be for you. 😛

So, sit back, grab a hot drink and let’s get into this months wish list post! I hope you enjoy it. 🙂 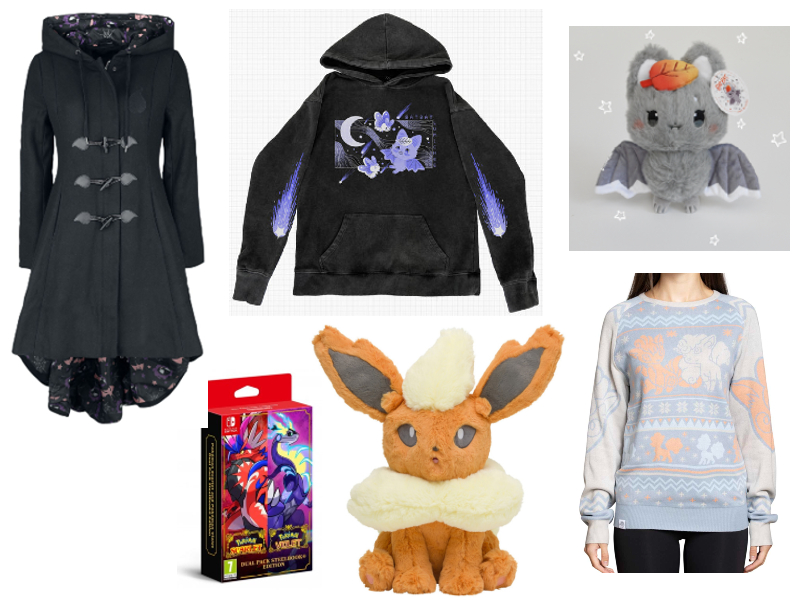 Christmas is just around the corner and with that, the Pokemon Center here in the UK and more have launched their Pokemon Christmas goods! Last year I purchased a Pokemon Christmas jumper, and I didn’t plan to again this year. However, when I saw this Vulpix snowflake sweater appear on the website, I just knew I had to get it. At this moment in time I haven’t ordered it, but, I do potentially plan to when I’m paid at the end of the month. I intend to wear the shit out of my Eevee Christmas jumper this year, but I love the look of this one for winter overall, as it doesn’t exactly shout “Christmas” at you, does it? It’s not cheap at £39.99, and the size I planned to get is currently sold out, so we’ll see what happens. 🙂 I remember last year a lot of people bought the Christmas jumpers and quickly sold them online in January.

Lumichee is an independent store/brand I’ve been in love with for a while now, especially since my own goodies from the brand arrived last month that I ordered! I picked up a plush, and a hoodie and on this wish list I have the same types of items wished after all over again. The Lumichee hoodies are SO COMFORTABLE and by far my favourites in my wardrobe alongside my Pokemon Center UK 2019 one. They’re really baggy too, which is ideal for me as I love an oversized hoodie. I love Lumichee’s Batbat design, so the fact they have released one makes me happy. This probably won’t be something I purchase for myself until after Christmas, for obvious reasons. 😛

This is up the top of my wish list right now! Recently the Pokemon Center announced three new fuwa fuwa daki plushies would be available to buy, Vaporeon, Jolteon, and Flareon. These haven’t hit the UK Pokemon Center yet, which I’m hoping they do for a few reasons… The first one (and main one at that) being the cost for shipping is very high… £30 plus in fact, which is more than the plush itself. The second reason being I could maybe ask for one as a Christmas/birthday present then. I’m wary only Dane would order from Japan, but even then I don’t think it’s something he wants to do at the moment. Whilst I’d love all three of these cute fluffy babies, the one plush I want the most is the Flareon. It’s cute little surprised face is adorable, and my favourite out of the three. We’ll see if I get this cutie in the future or not. 😛

The other Lumichee item, and another plushie to boot. 😛 The Batbat plush is one I’ve wanted for about two years now, as I do love bats. 🙂 I recently received my sakura inspired Mousemoth, which I do adore, but I still want a Batbat… This monochrome version is really cute and it’s mini too, so it won’t take over my plushie collection too much! 😛 Like the Batbat hoodie, I do plan on ordering that and the plush for myself after Christmas!

The new Pokemon game is out in less than a week now and I am SO EXCITED! I’ve had the dual pack pre-ordered since June and I’m ready for it now. I’ve watched all the trailers, and in all honesty I’ve also seen all the spoilers. I’m sick of seeing other people play it, I want to have my turn now! I ordered the dual pack as Dane will play Scarlet, and I’ll play Violet. We have Friday off work to play this all day together, as well as over the weekend, which I am beyond ready for! If you haven’t watched any of the trailers for the new games, go and do it! I know I’ve linked the dual pack, but I’m wary that a lot of places have sold out of this now, so keep eyes peeled for where you can grab your copy/copies. 🙂

Finally we have the item I’m probably most after on this list, which is a Pokemon themed winter coat, and of course if you didn’t gather by the name, it’s inspired by Gastly! This is from EMP, an alternative fashion website I frequent to every now and then, more so at Christmas for gifts for Dane. I saw a Twitter account share this coat, and some other Pokemon fashion items from this EMP Gastly range and fell in love straight away! If it wasn’t for the fact I’ve had so much stuff to pay for lately, as well as Christmas looming, I think I’d have bought this coat for myself by now! I’m semi hopeful I can pick it up for myself after Christmas as it would be a nice addition to my wardrobe. I love how long it hangs at the back, as well as the hood. Plus, it’s a duffle coat style, which is one of my favourites! I currently own and wear a red duffle coat during the colder months, which I don’t really want to replace.

So, there we have it guys, my wish list for November! Realistically from this point until after Christmas, I probably won’t be buying myself a lot of stuff, as that’s what Christmas is kind of for, as well as my birthday in January.

What items do you have on your wish list? Make sure to let me know in the comments!

Until next time, take care all and have a good weekend!